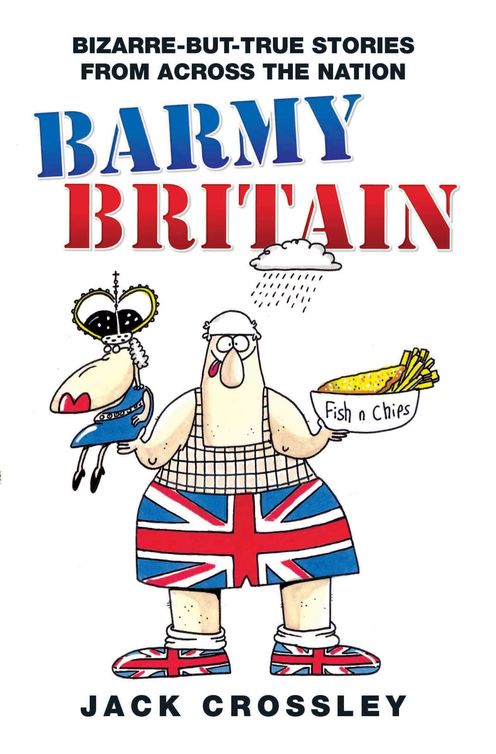 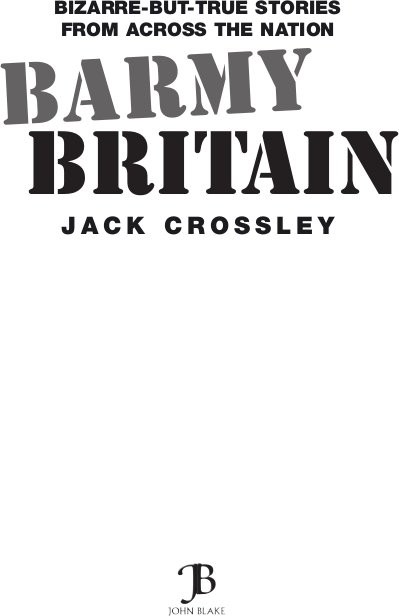 To my son Gary

1 Signs of the Times

Having spent over half a century working on newspapers, I am still well-placed to plough through chaotic piles of newsprint and magazines, searching for the ridiculous and offbeat and decidedly British. I started as a 14-year-old copy boy on the
Yorkshire Evening News
in Leeds and then went to the
Daily Dispatch
in Manchester, followed by a six month holiday relief stint at the
Daily Mail
’s Manchester office: the perfect training ground to identify and make a note of stories that embrace our traditional role of triumphantly meddling through with affable incompetence.

Some of the items which make up this book take no more than a couple of minutes to note down; others can take half an hour or more – digesting long articles and extracting from them a couple of
sentences that throw some light on what it is about the British that make the British British.

SIGNS OF THE TIMES

Drivers advised to ‘Honk if you like our quiet town’…

Spotted on the back of a motorcyclist:

IF YOU CAN READ THIS MY WIFE FELL OFF.

Due to an error in transmission we reported that a lady was found dead with a bottle in her hand. This should have read ‘bible’.

Simon Heffer tells of the effect of a superstore opening outside his market town. It was summed up by a notice put up by a local fishmonger: ‘Please do not mention Tesco, as a smack in the mouth often offends’.

Dave and Anne Osborn of Fettercairn, Laurencekirk, spotted this sign:

Richard Bird, of Blewbury, Oxfordshire, says he has been kept amused for years by a large digital display road sign he once saw. On a support pole at the side of the road there was a sign saying: ‘This sign is not yet in use’.

Ian Hall, of Burnhill Green, South Staffordshire, writes in
The Times
about a notice at an entrance to self-catering accommodation he saw in Cork, Ireland:

‘To operate the security lock, press buttons 2 and 4 together then press 3. If you still can’t open the door, the one at the end of the corridor is not locked.’

K. J. Faulks, of Leicester, spotted this classified ad in the
Leicester Mercury
:

Robert Price of Penrith, Cumbria, tells of his new power jigsaw with its mains lead, electric motor, sharp blades and a laser. The instructions came in a plastic bag bearing the warning: ‘Plastic bags can be extremely dangerous’.

Miss M. L. Whittle, of Bournemouth, asks ‘Couldn’t they just clamp them?’ after reading this notice in a café/shop in Kimmeridge, Dorset:

Post Office Savings, PO Box 198, Widnes, WA8 2AA On the back there is this message:

Well-behaved Dogs and Children Welcome on Leads’ – advert for the Turfcutters Arms in the
Waterside Herald
, spotted by Mrs Brenda Stevens, Southampton. 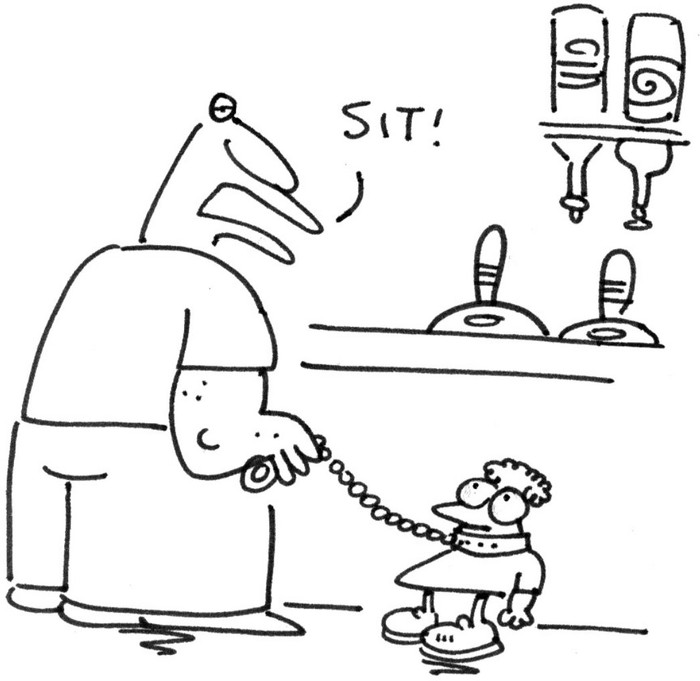 BUYING or SELLING a house could cost you dear. See a SOLICITOR… Just to be SURE.

Seen on a car in Norfolk: ‘If you can read this where the hell is my caravan?’

Notice in a London restaurant menu: ‘There is a very small possibility of finding nuts in our dishes that do not contain them at all.’

I noticed that my ‘vanilla flavour’ yoghurt listed 14 added ingredients – not one of which was vanilla.

‘Neuter your cat at a cut price’. Ad in the Derby
Evening Telegraph
.

Nigel Stapley, of Brymbo, Wrexham, recalls his favourite newspaper correction: ‘Due to a mishearing on the telephone we reported that Mr and Mrs (name withheld) would be living with the bride’s father. They will in fact be living at the Old Manse.’

‘Virgin sleepers. Never been laid. £18 each plus VAT.’

Advertisement quoted in the
Guardian

An advert for a pets’ underskin microchipping service, seen in a local paper in Droitwich, Worcestershire: ‘£9.50 per animal. Pensioners free’.

Notice in a memorabilia shop in Mevagissey, Cornwall: ‘Do not tell the shopkeeper that you used to have one of those at home’.

The instructions with my new steam iron includes the warning: ‘Never steam iron the garment you are wearing’.

I recently bought a pack of tablets that states on the container: ‘For the relief of headaches’. Among the list of possible side effects it says: ‘May cause headaches’.

I have been given a prescription for a medicine that has 83 possible side-effects, none of which I have suffered in the past. It would seem the cure is more hazardous than the complaint.

‘Visitors are invited to bring along some food suitable for sharing in a finger buffet’.

From the
Swindon Evening Advertiser
announcing a talk by missionaries on cannibalism.

‘If you enjoy working with people, why not become a mortuary technician?’

On a recent car journey we passed a fitness centre with the banner: ‘Detox Here’. A mile or two further on there was a pub sign: ‘Retox Here’.

Instructions on a new digital telephone include: ‘When the other person answers, speak’.

Sir, I recently borrowed an aluminium extending ladder and, having climbed to the top, I found a small bright orange sticker with an arrow pointing at the top rung. In French, German and English it read: ‘STOP! This is the last rung’. I wonder who would ignore this instruction and carry on?

In a contest to find Britain’s silliest packaging instructions the samples below were finalists:

Found on the underside of a box of sweets; ‘Do not read while the carton is open’.

A woman writes from America to tell the Daily Telegraph about the Harry Potter broomstick given to her five-year-old. The packaging read: ‘Caution. Broom does not really fly.’

On the handlebars of a child’s scooter: ‘Caution. This product moves when used.’

My favourite sign was in the window of an Indian restaurant in the Midlands: ‘Once you have eaten here, you’ll recommend others.’

Sign on a car park exit machine in Mousehole on the Cornish coast:

IF THE BARRIER FAILS TO OPERATE, GIVE THE MACHINE A LIGHT TAP. IF IT IS STILL NOT WORKING, PLEASE CALL AT THE SECOND SHOP ON THE LEFT AS YOU ENTER THE VILLAGE. IF THE SHOP IS CLOSED, CONTACT MR. SMITH AT 7 NEW ROAD, MOUSEHOLE.

Wacky warning labels have included: ‘Do not allow children to play in the dishwasher.’ ‘This wood drill is not intended for use as a dental drill.’ ‘Remove child before folding this push chair.’ ‘Never iron clothes while they are being worn.’

I once stayed in a Blackpool B&B featuring a sign reading: ‘No Wearing Boots in Bed.’

The packaging on a rain gauge purchased by David Booker of Bognor Regis carried the words: ‘Ideal for outdoors’.

On leaving the M5 and taking the road to Portishead there’s a sign saying: ‘Danger – Low Flying Owls’. On the A249 in Kent there is signpost for Hucking on which someone has written underneath: ‘Hell’.

There was a demonstration of marital arts on the village green.

Spotted by Bob Lee of Byfleet, Surrey in the Byfleet and Addlestone Review. Daily Mail

John Furniss, of Bedale, North Yorkshire, bought sunglasses with a label saying that they were ‘Filter Category 1, tested to British Standard BS EN1836’. A second label said: ‘Not for use in bright sunlight’.

A
Daily Telegraph
reader saw a birthday card for an 80-year-old that carried the message: ‘Not suitable for children under three’. Ricky Kelehar, of London N16 then wrote to say he had bought a card with the same message. Unfortunately it was for a
two-year-old
.

Luton Angling Club has designed a sign showing a swan inside a red circle along with a knife and fork and the
Guardian
asks: Does it mean ‘Don’t Feed the Swans?’ Or ‘Swans Not Served Here?’ Or ‘A Swan Is Never To Be Used As Cutlery?’ Apparently the sign is aimed at informing immigrants that wild swans are not for human consumption – ‘Unless you are the Queen, who eats them every Wednesday.’

The Bennetts of Pilton, Somerset, sent their daughter a ‘Congratulations on Your Graduation’ card. On the reverse it said: ‘Not suitable for children under five.’

Claire-Marie Slater, of Tunbridge Wells, bought a disposable barbecue with this warning: ‘Do not use in cribs, beds, prams or playpens.’

Bryan Flake writes about passing through a quaint village with this greeting sign:

This road sign was spotted by Robert Kite, of Sutton-in-Ashfield, Nottinghamshire:

‘Where do the narrow bottoms go?’ asked the caption.

As part of its determination to get tough on crime a police force put up signs urging: ‘Don’t Commit Crime’. Other daft signs spotted by the Plain English Campaign included:

Only for Her by Cristin Harber
Hack Attack by Nick Davies
Dreams of Speaking by Gail Jones
The Secret of the Chalisa by Subhanand, Dr. Runjhun Saxena
Malevolence - Legacy Series Book Two (The Legacy Series) by Devyn Dawson
How to Seduce a Duke by Kathryn Caskie
Griffith Tavern (Taryn's Camera Book 2) by Rebecca Patrick-Howard
The Coincidence 03 The Destiny of Violet and Luke ARC by Jessica Sorensen
Los héroes by Joe Abercrombie
Does This Baby Make Me Look Straight?: Confessions of a Gay Dad by Bucatinsky, Dan