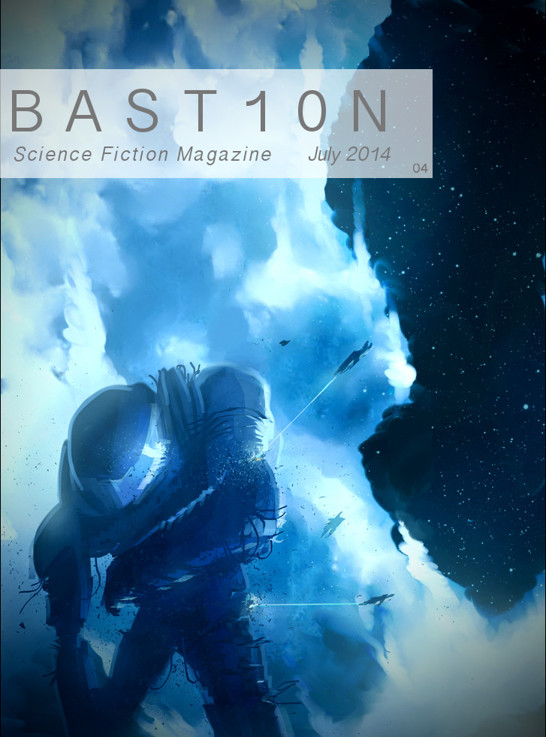 “The Properties of Water”, Copyright ©2014 by Alex Hernandez

Bastion Science Fiction Magazine publishes original short stories on the first of every month. As a new publication, we’re working hard to build up our readership. We’d appreciate it if you would help us out by letting your friends know about us. Thanks for your support and happy reading.

The Properties of Water

I’ve spoken numerous times about how long it takes to build a readership for a new market. It’s a long, slow process. We’re not there yet—not even close. However, we are making strides. In the early part of June it was made known that our May issue had placed in the top five for the most issues sold via Weightless Books (one of our three vendors). That is out-of-this-world
awesome
, especially given that May was only our second issue. The response we’ve received for each issue has been overwhelmingly positive (check out our recent review roundup at
bastionmag.com/news
), as well. Encouraging stuff, no doubt. I’m confident July will continue that trend.

I’m not going to spend too much time on this, but the World Cup is upon us, and I
love
the World Cup. It’s the pinnacle of The Beautiful Game, uniting people together in support of their country. In 2005, after helping the Ivory Coast qualify for the 2006 World Cup, Didier Drogba pleaded with his countrymen to put an end to their civil war after five years. They complied.
That’s
drama. It reminds me of family, and it’s this that seems to be a theme for our July issue. Family means something different for each of us, and isn’t always a positive influence, as you’ll see in some of our stories here, but it is a powerful one—for better or worse. For me, that’s what makes this issue so interesting. Your idea of family may not be the same as mine, and it’s the diversity of these relationships that appeals to me.

Axel Taiari kicks things off with
Degausser
, exploring the longing for one’s family as the motivation for things we did not think we could do.
Abandoned
, by Hannah Goodwin, is a touching tale of what family does for one another and looking back on long term influences. Good intentions are twisted in
Red Rubber Nose
by Robert Quinlivan, and if you have a fear of clowns, rest assured that your fears will be exacerbated when you’re done with it. When I spoke of challenging what family means from one person to the next, you’ll start to understand what I was referring to when you read
The Properties of Water
by Alex Hernandez. In
Forever Lights
, Peter Medeiros shows us how loss can cause a person to act in ways completely contradictory to their previously held notions. Eleanor R. Wood continues to keep us thinking about what we would do were we to find our convictions tested in unexpected ways in
Remember Prometheus
. There are no atheists in fox holes, as they say. Finally,
The Maltese Pterodactyl
by George S. Walker shows us that family isn’t always all it’s cracked up to be, and those most important to us sometimes just let us down.

Before the meeting, Emani refreshes her practical memory. The data surges through her neural pathways and leaves her convulsing on the bathroom floor. She stumbles back to her table and sits down. Reality shimmers with the jittery glow of boosted sentience. Through the bar's digital windows, fog engulfs downtown Paris. Emani taps the table's glass surface for another whiskey. Blink away the world and the drink rises out of the table with a pneumatic hiss. Another blink and the client is now sitting across from her. Ghoulish fashion, upper-spheres throwback gothic chic: flawless pompadour, corpse-white skin stretched to breaking point over a gaunt skeleton, eyes shielded behind shades, expensive suit unsoiled by rain. Emani smells pheromone-loaded cologne, the acrid reek of wealth. Distorted violins screech over the sound system.

"Hello," says Emani. "Would you mind removing your shades?"

"As you will." The client removes the glasses and slips them into his right pocket. He stares at Emani—no irises. Translucent eyeballs squirm like the dithering flesh of a deep-sea snail.

"How'd you hear about me?" says Emani.

The client’s grin is too white and somehow out of sync. "Your name has been making its way through many countries and corporate states. I asked a few…" he pauses to lick his blue lips, "associates.
Emani
, they told me, over and over again.
Emani Liod is the woman you want
."

"Flattering. What do you need?"

"We need you to retrieve a program."

"
We
," Emani repeats. She extends three fingers, each one for the name of a corp-state. "Are you with Aeon Vargas, Wolfe Biomedical, or Spector Prince?"

"What are you looking for?"

"A data eraser," says the client. "A software degausser."

"Nine days from now. The program is not web-wired, probably never will be, thus remote hacking is out of the question. One-hour window. A heavily defended convoy will depart from a bunker outside Washington City and transport the code to the nearest launch site. Once the rocket takes off and reaches orbit, it is over. It will land directly in the main research site's backyard, be brought inside, and placed out of our reach."

"A physical retrieval? Washington City is East U.S. turf. Do I get full recon?"

"As much as we can provide. Security details, route, and so on. The data must remain offline. You will personally deliver the chip to me four hours later at this very location."

"Eighty thousand credits delivered now to one of your orbital accounts, and a hundred extra upon successful delivery."

Emani scoffs. "I'm thinking this thing is worth way more."

"And drones, of course."

"Make it 150K now, two hundred upon delivery. You know I need a team."

"Your proposal is reasonable. Agreed." The client slides a chip across the table. "This is your prep data. I shall see you in nine days."

An upscale penthouse apartment cut from black marble. High-end everything. Money a trifling matter of reshuffling ones and zeroes to obtain comfort. Empty except for a few bots hunting the rooms for dust. The place is a carbon copy of her Hong Kong and London apartments, right down to the library of data chips. Difference that turns a house into a home: printed pictures adorn the monolithic walls. Photographs of Byron, her husband, and Chris, her son. Plague-dead sixteen years, forever beautiful and frozen in time. Lost in the London bombings while Emani was on a run for a medical corp in Kuwait. She wanted to use the money to buy Byron the beachside house of his dreams and a real puppy for Chris. She ended up paying for their funerals.

Emani eats alone, sitting at her desk. She jots down a couple of basic reminders for tonight's planning session. She hates herself for having to write thoughts down. Used to be she could recite Pi to the 46
th
and keep a mental grid of her bottomless stable of freelancers without blinking.

It’s what got her a short-lived run as a conduit, after Byron and Chris passed away. She had delusional hopes that she could help stop the plague, maybe make the bastards pay. Six months spent lying down in a freezing chamber at the heart of a black lab, intravenously fed and seizing under a deluge of bits assaulting her synapses 24/7. French government official said, "Program’s being shut down. Good run, though." A fat check, out the door, brain-damaged and hallucinating from withdrawal. Then two years in a private hospital with sour-faced nurses spoon-feeding her gruel and Emani twitching and soiling herself while trying to remember the alphabet.

In bed, the empty side a chasm threatening to swallow her, she realizes that she doesn’t remember her wedding day. She knew that just yesterday, she’s sure of it. The fear gets to her, then.

Slight comfort: post-conduit memory issues never became a bother on a practical level. Non-personal knowledge is easy to re-acquire. Forgetting the taste of wine can be fixed by opening a new bottle. As for the jobs—no problem. Can’t remember how to access a mainframe, slither past a firewall, salvage a bagbiter, trick a daemon? Insert a chip, done—like ghosting an uncorrupted version of herself. But some things, she has come to learn, can’t be reloaded.

She wills herself to remember them now. Fetal position, her cheek resting against the cold pillow. "Teller," she says out loud.

The voice booms from deep within her head, a metallic bass bouncing around her skull.
"Hello, Emani Liod
.
"

"They vary depending on the things you are referring to."

Emani can't help but grin. She tries to picture the Teller, with its body-mind of wires and chips crunching data in a South African subterranean server farm as large as a metropolis. The system is a descendent of Nautilus—early 2000s NSF data-swallower. It was meant to produce near-future visualizations by analyzing the past. Nailed a few things before they happened: localized wars, the new plague. It failed to predict millions of others and rambled madly for weeks on end. Not good enough for the UN. Funding was cut, hard-locks set in place. No weapons, no financials. Crowd sourcing and private groups took over, made it public, fed it more data. Some of its die-hard believers moved to South Africa to keep it running—hopeful pilgrims kneeling at the altar of an apocryphal deity.

For Emani, the Teller became the perfect storage unit. Digitally fed it her own life, her past: pictures, databanks, videos, recordings, and diary entries.

"We had some on our second date."

"Correct. You win. There is no prize."

"It was beautiful. I was making big money. Had gone freelance, then. I flew us to Rome afterward. We started undressing each other in the hotel elevator. I was already in love. I was pregnant not long after."

"Dates match, but difficult to confirm."

"Best accident of my life."

"Yes. Now tell me about my wedding day."

The Teller speaks. Emani listens. How many nights has she closed her eyes and listened to the drone of a distant machine recounting the most crucial moments of her life?

Eight days and nights without proper sleep. Lights in the apartment flash from decks and pads running at full brightness. Every twelve hours, Emani opens the databank cabinet. Its insides radiate with thousands of blue LED stars. Each one belongs to its own galaxy: tech, day-to-day, history, language, pop culture, mathematics, society, geography, miscellaneous. Backed up from her past or downloaded from the market. Knowledge and memory at the cost of a credit swipe and a few minutes of nausea. Inject, learn, remember, and get back to work. She snatches the occasional power-nap but leaves programs running behind her eyelids.