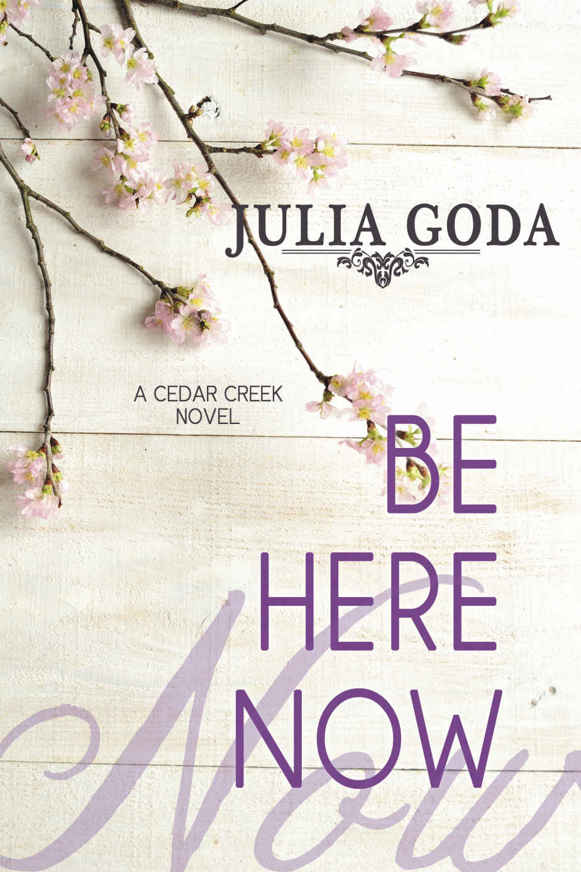 Enjoy other works by Julia Goda

All Rights reserved. No part of this book may be reproduced or transmitted in any form or by any means, electronic or mechanical, including photocopying, scanning, recording, or by any information storage or retrieval system, without written permission from the author, except for the inclusion of brief quotations in a review.

This is a work of fiction. Any resemblance to characters, organizations, or events of real life described in this novel is either a product of the author’s imagination or used fictitiously. The author acknowledges the trademarked status and trademark owners of various products referenced in this work of fiction.

my dear husband, my best friend, the only person that I take a kick in the behind from without complaining (too much)—and frequently do.

Thank you for supporting me on this amazing journey.

Like so many things in my life, I couldn’t have done it without you

The beginnings of Pearl Jam’s
Given To Fly
woke me out of my deep slumber. Thinking it was my alarm, I fumbled for the snooze button knowing that I could at least push it three more times. I was a snooze button girl and always set my alarm to wake me a good twenty minutes before I actually had to get up.

I hated mornings. I didn’t do mornings. And since it was Saturday and I didn’t have any early classes, my alarm should not be going off at this hour. I must have forgotten to turn it off last night.

I hit the snooze button.

I opened my eyes just enough so I could peek at the alarm clock on my bedside table. It was 9:30 and the little red button next to the words
Alarm On
was not lit, which meant it wasn’t the alarm that was making the noise. It was my phone. The ringing stopped, then immediately started up again. I ignored it and pulled the blanket over my head. Whoever called me at this hour on the weekend knew better and could leave a message. It stopped again and thankfully, stayed silent. I rolled over, snuggling deep under the blanket and into the pillow, and went back to sleep.

What seemed like only seconds later, I was woken up again. This time, someone was knocking on my door.

Silence for a second, then the knocking started up again.

I opened my eyes. He had got to be kidding me.

I grabbed the blanket, shoved it back angrily, and stomped to the door as I ranted.

“Since when do your hook-ups kick you out this early? You better have coffee if you expect me to—”

I opened the door and froze mid-sentence.

It wasn’t Chris, my ex-boyfriend now best friend, who was standing in front of me.

It was Jason Sanders.

Jason Sanders, the extremely good-looking singer and guitarist of the Indie rock band I had seen at the bar the night before. He was also one of the most notorious players on campus, which was why I had blown him off when he approached me after the gig at first. But against my better judgement, I had ended up talking to him and had been surprised at how easy and comfortable it was and how much we had in common. We had talked for so long that I hadn’t realized how late it had been, so he had walked me to my dorm in the early morning hours, but I hadn’t let him into my room when he asked to talk some more. I wasn’t that kind of girl. I also wasn’t stupid.

“I’m sorry to disappoint. I’m not Chris and I hope to God that Chris isn’t your boyfriend. Though judging by your little rant, I doubt it, since I don’t think you’re the kind of girl who would be okay with her boyfriend hooking up with other girls. Or at least I hope so. On the bright side, however, I did bring you coffee.” He held up one of the to-go coffee cups he was holding.

I stayed frozen, too surprised and shocked to do anything but stare at him.

“You’re not a morning person, are you?”

I shook my head slowly.

Jason chuckled again. “Then I’m glad I brought you coffee. You gonna let me in?” That took me out of my shock. I looked down at myself. I was wearing my short pajama pants—they were so short they were just long enough to cover my ass cheeks— and a tight tank top with nothing underneath. I felt my cheeks redden with embarrassment as I looked back at him.

“Uhm, I’m still in my pajamas.” Jason’s eyes looked me down, oh so slowly, before they met my eyes again. The instant heat in them made me gasp. Jason smiled a knowing smile.

“Believe me. That fact wasn’t lost on me.” I blushed. His smile turned into a grin.

I tried to shake myself out of the daze he had put me in to ask a very important question. “What are you doing here?” I asked, still a little breathless.

“I said I’d call you today, which I did, but you didn’t pick up, so I decided to come over.”

“I’m not usually up this early on the weekends.”

“Neither am I,” he said in a low voice. My eyes got wide at the meaning behind those words.

“How about this,” he said as he handed me one of the coffees. “I’ll wait outside while you get ready and then I’ll take you out for breakfast.” He changed his voice back to normal, taking pity on my sorry state. I was grateful. Still, I had my doubts as to where he was going with that invitation or what he would expect in return.

I took the coffee but kept looking at him. “Why?” We both seemed to know that my question was about more than the reason why he wanted to take me to breakfast. Jason stepped closer to me, invading my personal space. He dipped his head down so he could keep holding my eyes.

“I like you. More than I’ve ever liked a girl. You intrigue me and I’m never intrigued. I want to spend time with you, get to know you.”

I narrowed my eyes at him. “I told you last night, Jason, I’m not one of those girls who swoon over and fall for pretty boys and their pretty words. You won’t get into my pants.”

He gave me another grin.

“I realize that and it’s strangely refreshing. That’s one of the things I like about you: your honesty, your no-bullshit attitude. This is not some trap or play. I really want to get to know you better. Though I do hope to change your mind about the no sex thing eventually.”

I raised my eyebrows and thought about what he was saying.

“Come on, Loreley. Let me take you to breakfast. Let me prove to you that I’m serious.”

And that’s what he did.

We fell head over heels in love.

Or so I thought.

“Congratulations, Lore. I know this means a lot to you.” Chris said as he hugged me tightly.

“Thanks, Chris. It does. I never thought I would get in with a label that big. I didn’t think I stood a chance.”

“This just proves even more that you’re awesome. You just wait and see. They’re gonna love you so much, they’ll offer you a job before your internship is over.”

That was highly unlikely. Though, I loved that Chris had that much faith in me.

“I doubt that. All I’ll probably do all summer is grab coffees and hope I get the lunch orders right. But still, it’s a foot in the door that I can’t pass up.”

Chris chuckled. “Well, then you’ll be the best coffee fetcher and lunch girl in all of L.A.” He pulled back and looked at me. “When are you leaving?”

I sighed. “I know. He’s not gonna be happy. Heck, I’m not happy that I won’t see him all summer, but I can’t say no to this. He’ll understand.”

Chris said nothing, just looked at me with skepticism in his eyes.

“He will, Chris. He knows I want this and he wants me to be happy. And it’s a step closer to the future we both want.”

“Yeah, it is. But I think you underestimate how much that man needs to be close to you. He can hardly go a day without seeing you. Now he’s gonna have to adjust from thinking you’d be with him during his first real tour to not only not having you with him, but you being in a city like L.A. on your own.”

“I can take care of myself.”

“I’m well aware of that. So is Jason. That doesn’t change the fact that he’s not gonna like it.”

Chris was somewhat right. I knew that Jason would be upset about the fact that I wouldn’t be able to go with him and his band on their first tour. It’s all we’d been talking about for the past few months. A scout had approached them after they played a gig at one of Austin’s bigger bars earlier that year and had set up a meeting with a manager, who had taken them under her wing and had organized a summer tour across half the country where
The Crowes
would play at bars and small festivals all summer. I was supposed to go with them and once the tour was over and was hopefully successful, we’d move to L.A. together, where I would try my luck to get a foot in with a label somewhere as an intern or personal assistant to get some experience under my belt while he kept working with his band and hopefully got some studio time.

That had been the plan. And me accepting an internship for the summer that started in less than a week meant it couldn’t happen that way.

He would be disappointed.
I
was disappointed that I wouldn’t see him for three whole months. But I was also excited. Excited to get this chance, to get some experience and be able to learn from some of the best people in the music business, which was a dream come true. And I was eager to get an early start on our future together.

Yes, Jason would be disappointed, but he loved me and would be happy for me, for us, once the initial blow had worn off.

I was absolutely, no doubt about it, certain of that.

A few hours later I wasn’t so certain anymore.

“You can’t go, Loreley. I don’t want you to.” Jason had not taken my news well at all. Worse than I thought, he wasn’t just disappointed. He was mad as hell. And that was starting to piss me off.

“
Your
future? I thought it was
our
future. All this time it has always been
our
future. Now you get one lousy offer for a shitty internship and everything else isn’t important anymore? I thought you weren’t one of those selfish bitches. Guess I was wrong.”

I flinched and gasped as hurt hit my chest at hearing his hateful words. He had never talked to me that way, had never said anything remotely negative about me or
to
me, had always been loving and supportive and gentle with me. Sure, we’d had fights, but they’d never turned dirty or ugly. Not like this.

I stood there, completely stunned. But he didn’t take back those hurtful words. Nor did he apologize. Not even when tears started to fill my eyes and silently run down my cheeks. He didn’t say anything. Didn’t do anything but stand there and glare at me. I turned around as if in a trance without saying another word and walked out of his apartment.