Read Be Mine Online 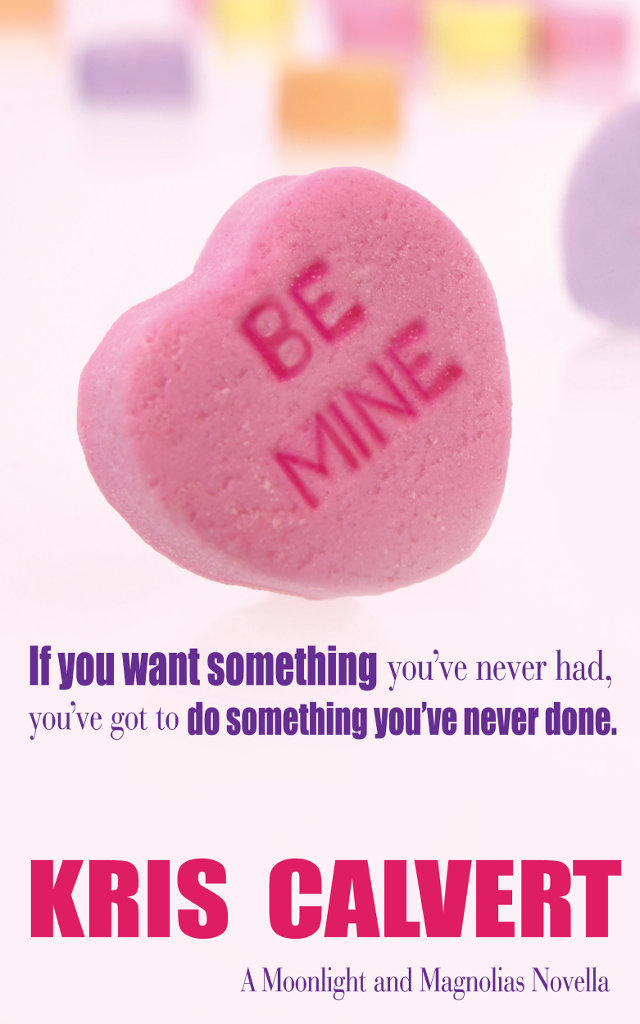 A Moonlight and Magnolias Novella

All rights reserved. No part of this book may be reproduced, scanned, or distributed in any printed or electronic form without permission.

This is a work of fiction. Names, characters, places and incidents either are the product of the author’s imagination or are used fictitiously, and any resemblance to actual persons, living or dead, business establishments, events, or locales is entirely coincidental.

Every year, millions of people look for, wait for and believe that love will find them. That love will somehow miraculously see their waiting heart and send the perfect match to their doorstep. But love is risky. Love is complicated. Love can be messy, and devastating.

On the other hand, love is what makes us feel alive and maybe, just maybe, the risk is worth the reward. Life is about
making
things happen – not
waiting
for them to happen. So if you love someone, be sure to tell them everyday–because life is short. And if you’re looking for love, look for it everyday– because life is short.

Thank you to
Mary,
the best doggone grammar ninja in the business. You keep my I’s dotted, my T’s crossed, and me on my toes. I’m incredibly grateful for you.

Thank you
Robyn, Jennifer
and
Molly
for reading for me. Your suggestions, insight and friendship mean the world to me. Y’all rock and I love you.

Thank you
Jim
, my friend and colleague for over twenty years. You are the most talented designer I’ve ever had the pleasure of knowing or working with. Thank you for being my friend through thick and thin. I love you.

Finally, thank you to my wonderful husband,
Rob
and my two amazing children,
Luke
and
Haley
. I thank God every day that you’re mine. You are my everything. I love you.

For the romantics: hopeful and hopeless.

Once in a while, right in the middle of an ordinary life, love will hand you the makings of a fairytale.

Pearls don’t lie on the seashore.

If you want one, you must dive for it.

M
ike Montgomery hated January. He hated everything about it. It was dark every morning when he left his luxury apartment to manage the design firm he’d created eight years ago, and darker still when he returned home at night. January was the worst time of year in his opinion. The holidays were over, and winter would rear its ugly head for the next sixty to ninety days, or at least until the rat bastard, Puxatauwny Phil, gave his opinion.

The beginning of a new quarter, his clients once again had a budget to allocate on their marketing and design needs. In turn, business would be good. The longer hours and higher accounts receivable were always a welcome distraction to what Mike knew to be true. He was lonely.

A striking and refined man, Mike wasn’t your run-of-the-mill tall, dark and handsome. Awkward through most of his teenage years, he’d quietly developed into the gorgeous chunk of change he was during design school. Unfortunately for him, his certainty in his looks and ability as an artist and businessman didn’t do diddly-squat for his confidence with women he was romantically interested in.

He’d had his share of casual sex, as it was hard to turn a blind eye to a gorgeous woman offering it up. But he’d never been in love. He’d never cared for anyone past one romp in the hay, or inelegant sexual encounter. At the age of twenty-nine Mike Montgomery still retained his shy and awkward nature.

He’d committed most of his life to his career and the business he’d built since graduation. By allowing his personal life to take a back seat to his professional goals, he’d succeeded in amassing a small graphic design empire in the last decade, but had exchanged his acquaintances and friends – both male and female – for business colleagues and clients.

He had no time for love. At least that’s what he told himself.

The one thing Mike looked forward to each morning was his daily trip into the downtown coffee shop. For the past year, on occasion he would cross paths with a woman who was nothing less than a goddess in his eyes – the beauty, who at seven fifteen a.m. would karmicly patronize
his
Starbucks on Vine.

She wasn’t an ordinary woman. Beautiful of course – long blonde hair, blue eyes, and an unspoken grace that made him feel like he was in the presence of something special. And her smile – her smile made his heart beat wildly out of control. He found his mouth stitched together by his anxieties when his lingering gaze would catch her eye.

Although he’d not seen her since late November, he hoped each morning he’d get the chance to study her beauty yet again.

Last month he’d promised himself if he saw her he would find out who she was, what she did, and ask if she would join him for lunch, dinner, or even oddly enough, coffee. He knew her merely by her Starbucks’ moniker – tall, non-fat, no foam latte.

Carefully choosing the witty banter he’d say upon meeting her again, Mike had spent countless hours working on his approach. But each time he would get within ten feet of her, his body tensed and his mind went blank.

And so it went. Every day Mike would patronize the Starbucks at seven fifteen sharp, in the hope he would have one fleeting moment to experience her graceful beauty. And today, Monday, January sixth, was no different.

“Just another day in paradise,” Mike smirked as he dusted the early morning snow from his head.

“What can I get started for you?” she asked, seemingly ignoring the sarcasm in his voice.

He quickly made his way to the newspapers for sale, as was his usual practice, while he waited for his coffee.

“Tall, non-fat, no foam latte,” Lexi barked as she began to mark the cup.

“No,” Mike stopped, wondering how Lexi could ever get his order wrong after two years of the exact same thing. “Why would you say that? That’s not my order. That’s hers.” The words slipped out of his mouth before he could recall them as he thought about his coffee goddess.

“That’s mine,” a delicate voice rang from the dark corner.

There she was – walking out of the cold January morning and into his world. The non-fat, no foam latte goddess stood smiling in front of Mike. His heart began to beat wildly, right on cue.

“You aren’t trying to take my coffee now, are you?” she mused with a laugh as Mike watched her eye him head to toe.

She was as beautiful as he’d fantasized every day. Her long blonde hair was pulled tightly into a ponytail, and the mink headband she wore to cover her ears contrasted with her milky complexion and bright red lips. Mike immediately thought she looked like a 1940’s movie star. “No, I’m…I’m…café breve,” he stuttered.

“Non-fat, no foam latte.” She smiled as she extended her hand. “It’s nice to meet you.”

He physically trembled and verbally stumbled as he touched her ungloved skin. “I know…I mean, it’s nice to meet you.”

“You know?” she laughed. “Well, I’m not
always
non-fat, no-foam. Sometimes I fan it up a bit and go for the pumpkin spice.”

Mike nodded, unable to make a coherent sound. He was lost in the moment. As he felt his breath become shallower, he searched his mind for all the funny lines and amazing words he’d promised himself he would say. Nothing.

She shrugged her shoulders politely and looked to the ground.

“Mike, your coffee,” shouted Lexi from behind the counter as a sudden seven-twenty rush made its way into the shop.

Mike feared if he turned his back, she would be gone.

“Well then, café breve,” she mused, picking up the violin case at her feet. “Have a nice day.”

He watched her walk away and onto the snowy street that had become quietly lit by the new day.

“What just happened? Did
that
just happen?” he asked Lexi as she finished taking an order from another customer anxious for warmth and caffeine.

“I don’t know what you want me to say, Mike. You had a golden opportunity to speak to Sarah and you didn’t take it.”

It suddenly occurred to Mike that Lexi knew more about the coffee patrons than merely what they wanted to drink. She could be his gateway to the goddess.

“Tell me what you know Lexi. Tell me now.”

Lexi’s shoulders fell and she gave Mike a heavy sigh.

“Calm your roll,” she whispered.

“Will you take over for me?” Lexi asked a fellow barista as she stepped around the bar and into the coffee lounge. “Look Mike, I can give you the 411, but you’re gonna need to learn to open your mouth and actually speak to her. Because what I just witnessed? That was messed up.”

Lexi laid it on the line for Mike, and suddenly he was being schooled by a nineteen-year-old college girl. “Her name is Sarah. Sarah Brooks. She’s a violinist with the symphony orchestra.”

“I saw the violin case.”

“Whatever, dude. She’s super nice, but I suspect now she’s super creeped by your abnormal behavior.”

“When does she usually come in, Lexi?” Mike questioned, taking her by the arm. “I haven’t seen her in a couple of months.”

“This is exactly the stalkerazzi behavior I’m talking about. You’ve got to pull it together. She’s just back in town. She told me this morning she was on the road or something touring through the holidays.”

“Thank you, Lexi,” Mike blurted with excitement. “See you tomorrow.”

It was too late. Mike had already rushed out the door and into the snowy morning air. He was now in possession of what he’d longed for – the name and occupation of his goddess. What he did with it was entirely up to him.

E
llen Temple had been doing yoga for over two years. It was something her psychiatrist advised after her husband, a Marine sergeant, came home in a casket from Afghanistan. The yoga was supposed to clear her mind and help her relax. Mostly what it had done was cause her to drop ten pounds from her tall, slender frame, but it couldn’t seem to lift the weight of her heavy heart.

Blood Father (Blood Curse Series) by Tessa Dawn
The Duke's Night of Sin by Kathryn Caskie
April Kihlstrom by The Dutiful Wife
Forever and a Day by Alexis Konsantino
On His Terms by Rachel Masters
Her Valentine Family by Renee Andrews
Mystery: The Card Counter: (Mystery, Suspense, Thriller, Suspense Thriller Mystery) by James Kipling
Earth To Nole: Return of the Prince by Lomash, Kumar
The Chinese Garden by Rosemary Manning
Exposed by Maller, Andrea