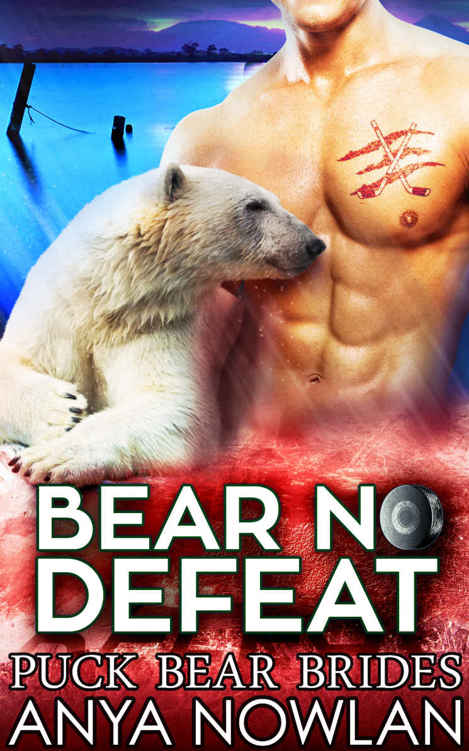 “So, shower and then dinner, right?” Alice asked, as Jax seemed to have forgotten himself by staring at her, a soft look in his eyes.

“Right,” he said, shaking out of his stupor. “We should go get that shower, then.”

He smiled wide, a devilish glint in his eyes.

“Maybe,” Jax said with a shrug, taking a sip of his drink before putting it down on a nearby counter and turning to her again. “But I’m going to kiss you now and you’re not going to argue.”

Alice opened her mouth in time to start doing just that, but then his warm, callused palms brushed gently against her face, his thumbs on her cheeks as he leaned in and kissed her on the lips with all the reverent affection she could imagine. It kicked the air right out of her lungs, and instead of fighting against it as she thought she would, Alice found herself putting her hands on his wrists and getting up on her tiptoes to meet him deeper in that heavenly kiss.

Raw desire flashed through her and she felt it roiling inside her, moving from her lips and along her arms and legs before balling up tightly in her core, making her knees buckle. She was only loosely aware of the moment when Jax took the bottle out of her hand and placed it aside and even then she was pretty sure that the only reason she noticed was because for that instant, his hand was not on her.

“You know,” Jax murmured, running his thumb along her chin now and making her meet his gray gaze. “If you wanted to get with me this bad, I would have said yes even without the arranged marriage.”

This is a work of fiction. Names, characters, places and incidents are either the product of the author’s imagination or are used fictitiously and any resemblance to any persons, living or dead, business establishments, events or locales is entirely coincidental.

No part of this work may be used, reproduced, transmitted in any form or by any means by anyone but the purchaser for their own personal use. This book may not be reproduced in any form without the express written permission of
Anya Nowlan
. Any reproduction or other unauthorized use of the material is prohibited without the express written permission of the author.

You can find all of my books here:

“Come on,”Jax seethed, his teeth gritted as he blew across the snow in a last-ditch effort to get to the opposing goal.

The seconds were running out on the clock and everyone were rushing the goal like it was some sort of pathway to eternal bliss. Frankly, it might as well have been, but this roadway to heaven was paved with snarling Colorado Mountain Lions players, and those guys were in no mood to let anyone pass.

The last moments of the very last game of the Western Conference National Shifter Hockey League Regionals were upon them, and the crowd in Boulder, Colorado had fallen almost eerily silent. The whole Shifter Grove team, affectionately calling themselves the Shovelers for lack of a better name at the moment, had risen up as an angry tide, reading the tie on the scoreboard far too well.

The Mountain Lions would kick their asses if it came to a shootout. Their only option was to get the puck in the net one more time or face fairly certain defeat. And that Jax could not bear.

Cannon and Heath, the first line of the Shifter Grove Shovelers and one of the best offensive partnerships in the league, were getting hammered hard and it was Jax who got the puck passed to him from the front when Cannon got just about tackled. He passed it on to Leo with a wrist shot before one of the Mountain Lions defenders could come at him, the younger of the twin grinder pair picking up the puck smoothly and faking past another defender on his way toward the goal.

All eyes were on the puck and Jax knew that the first offensive player who it made his way would be targeted by every damn opposing player on the ice. He broke through the barrier of two defensive players who weren’t quite as fast as the polar bear shifter was and put himself between Trove Hamisch and Heath, assuming correctly that Trove would try to plow through Heath like a wrecking ball if given the chance.

The puck moved like a blur and slowly, in the background of his hearing, Jax could hear the crowd begin to stand up and roar their cheers or jeers as the Shovelers descended on the goal like a plague of bears on the search for honey. Again, a true enough comparison, ignoring the wolves and the big cats on the team, that was.

The puck was getting passed so fast that it took superhuman reflexes and attention just to keep up with it. If hockey regularly was a fast, no-holds-barred kind of game then it was only amplified with shifters in the mix, what with the players being stronger, faster, bigger and more vicious than ever. Jax snarled under his breath as the puck was stolen from Logan, Leo’s brother, but Memphis was at the right place at the right time, the big polar bear defender managing to disorient the Mountain Lions player enough to get the puck off of his stick and passed to Cannon.

Jax’s stomach clenched and his eyes immediately went to Trove. Cannon was their playmaker but Heath had one of the steadiest hands in the league, and the sniper was usually the one entrusted with shots at times like these. There was an opening and Jax caught it in time, seeing Trove move at the last possible moment to try and lunge for Heath as the puck was passed to the grizzly shifter with dizzying speed.

It made sense for Trove to go hard like that. If he got penalized for it but he took out Heath, the game would still go to a shootout and this would be in the Colorado team’s favor. Jax reached out with his stick just enough to make Trove fumble his step and that little snippet of time was enough for Jax to cram himself between Heath and Trove and plow the man into the nearest partition while Heath took the shot.

Somewhere in the distance, through the pounding of adrenaline, the roar of his bear and the fact that a very large, very pissed-off Norwegian bear was trying to beat the shit out of him for ruining his play, Jax Darmuth could hear the Shifter Grove section going wild. They were chanting Heath’s name and the team’s almost in unison. The guy who made the goal always got the damn honor but Jax didn’t care. They’d won.

Now he just needed to get this damn Colorado bastard off his back before his polar bear snapped and shifted right on the ice. It wouldn’t be the first time.

This can’t be good,
Jax thought wryly, sinking into the wide, plush leather seat offered to him by his father after they shook hands.

“Fine game, son,” Jordan Darmuth said with a dry smile that implied neither truthfulness nor joy, two things that Jax had long ago stopped expecting from his parents. “Your mother and I are very proud of all that you have accomplished.”

“Thanks, Dad,” Jax responded, stifling a sigh as he let his arms rest awkwardly on the armrests. A waitress in a fancy, black and skintight outfit with red lips appeared to place two glasses of scotch in front of both Jax and Jordan on the table.

She was dressed like money and frankly, the whole place reeked of it. It was a small lounge tucked away on the top floor of one of the highest buildings in Boulder and for the life of Jax, he couldn’t figure out how his father could always find the snootiest cigar and whiskey lounge in any town he went to. It was like the man must have had some kind of internal GPS aimed right at the location where the drinks would cost an arm and a leg, minimum.

“So what do I owe the pleasure?” he asked cautiously, picking up his glass and feeling the sports jacket he was wearing strain a little over his wide back.

He’d been in Shifter Grove too long. The big, burly polar bear was starting forget how it felt to dress befitting from the vast Darmuth fortune, the presence of which he had often been reminded by both his family and his agent while the Shovelers had still been the Chicago Bluehawks. Now, however, with so much distance between his New Hampshire-based kin and the team, Jax—or Jasper, but don’t let anyone know that!—Darmuth had happily begun to block out everything that didn’t strictly relate to hockey or his desire to play it.

“Can’t a father come and see a son without there being a ‘reason’ for it? Or is this continental cup of yours not reason enough?” Jordan queried, quirking a brow at Jax as he took a sip.

“Regional finals, Dad. And no, I haven’t known you or Mom to come to any game of mine unless the President’s in attendance,” Jax said, sloshing the scotch around in the glass.

It tasted sort of bitter. Probably meant it cost a thousand bucks a glass, then.

His gray eyes flicked to his father once more, the man before him the perfect representation of what Jax would look like in thirty years’ time. He was tall and powerfully built, with wide shoulders that were only slightly slimmer now than they must have been in his youth. Hard lines carved his face into a mask of dignified strength, and steely eyes and graying salt-and-pepper hair all came together to create the perfect visage of shifter “royalty.”

It was the closest thing to describe the Darmuths, really. Their fortune rivaled those of some of the Treasure Lane dragons and if Jordan Darmuth felt like it, he could buy up half the NSHL teams and not even feel the dent in his pocket. So it made sense that whenever the Darmuth patriarch would look at his eldest son, his Alpha heir, the glint in his eyes would dim slightly with disappointment—an emotion Jax himself had become quite accustomed to.

“I do wish you’d give up on this nonsense,” Jordan started, prompting an eye roll from Jax.

“You have an MBA from Harvard of all places. You could work for any law firm in the world. And instead you choose to waste your life away chasing a puck on the ice.”

Jordan’s lips thinned in disapproval, which he tried to hide behind the glass of scotch, but Jax simply shrugged his shoulders. Nothing new; he’d heard this before. And his father was rather mild compared to his mother, really, who if she got going could not be reasoned with to stop spewing hate until a Prada sale came around in her general vicinity.

“We’ve talked about this. I’m not going to quit. I have three years left on my contract with the Shovelers and I’m staying where I am. With my team.”

Peppermint Kiss by Kelly McKain
The In-Between World of Vikram Lall by M. G. Vassanji
Quarterback's Surprise Baby (Bad Boy Ballers Book 2) by Imani King
Unleashing the Receptionist: ...the Receptionist, Book 3 by Juniper Bell
Kasadya Hellhound Twisted by Swart, Karen
The Importance of Being Ernie: by Barry Livingston
American Gods by Neil Gaiman
I'm a Fool to Kill You by Robert Randisi
Send Me a Sign by Tiffany Schmidt
What Does Blue Feel Like? by Jessica Davidson