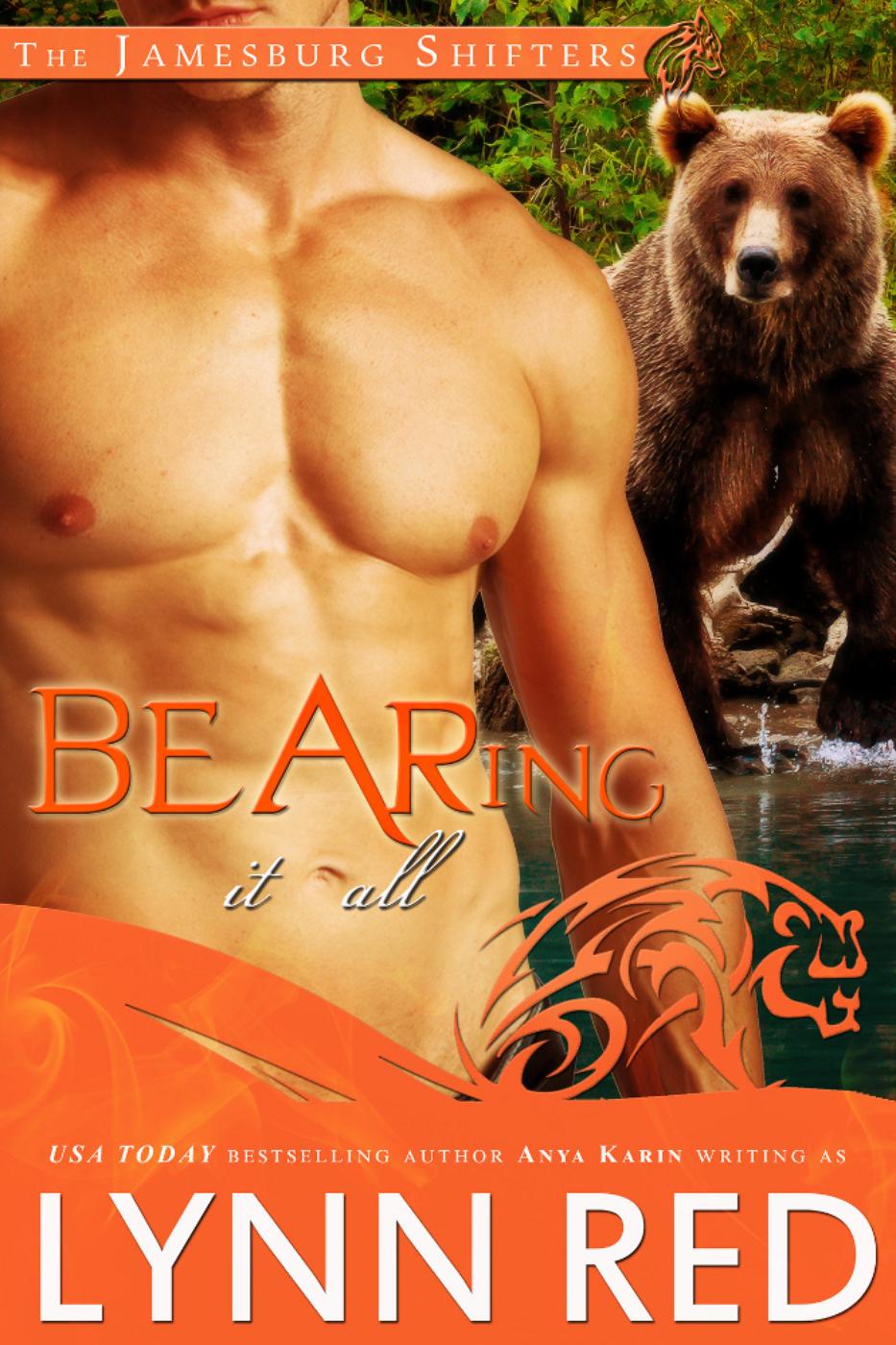 Change For Me (Werewolf Romance)

Shift Into Me (Alpha Werewolf Romance)

For all of you, the readers who make this possible.

Thank you so much for taking the time to check out my new book. Click here to subscribe to my mailing list to keep up to date on all my new releases, giveaways, and free books!

E
rik Danniken, the self-satisfied, tattooed, motorcycle riding Alpha of the tiny shifter-filled town of Jamesburg sat at his desk for the first time in two weeks and stretched his legs.

In Jamesburg, Alphas were more than snarling, fighting, wild savage wolves or bears or even sometimes hedgehogs – they were something far more terrifying... something far, far worse.

They were civil bureaucrats.

He stretched his legs and laced his fingers together behind his head. Erik took a deep breath, filling his lungs. The scent of old drywall and air conditioning ducts that needed some work came along with it.

Erik’s expense-account-paid Keurig made a hissing noise, then a gurgling one. He smiled, collected his Sea World Orlando souvenir mug, and inhaled the scent of Donut Shop Medium blend.

“It’s good to be back,” he said to himself. He walked over to the window of his office and looked out, smiling.

His view was straight out into the town square. Not a
lot
happened in Jamesburg, but most everything that did happen, took place right there. A couple of pharmacies, and what was probably the last Blockbuster Video in existence stared back at him.

It was a Saturday, but he had to come in as soon as he got back from his honeymoon to sign some venue rental agreements. A fighting organization, which looked on paper to be legit, wanted to stage a few matches at the Jamesburg Civic Center, so he grudgingly showed up and signed them. After all, any money coming in was good money - he had to figure out some way to pay for new street lights.

The little man who brought the papers wasn’t exactly savory – he was short, round, and had the strangest way of smiling all the time – but he also had a stack of hundreds, so the fact that the guy smelled like cigars and whiskey didn’t matter much.

Uncorking the bottle, he took a whiff. “Ahh,” he sighed. The sharp, spicy aroma of oak aged bourbon was his second favorite smell. The first was Chanel No. 5, because that’s the perfume Izzy wore.

He poured a little sauce in his coffee, as his thoughts drifted to his mate and how her hair felt against his chest. Then, Erik shrugged and poured some more. Then he adjusted the picture of Izzy and him in front of Shamu’s tank. He hadn’t really wanted to go to a bunch of theme parks for his honeymoon, but it turned out to be a really good way to pass the time between, er,
sessions
.

“Little early for that, isn’t it?”

“Jesus!” Erik jumped up to his feet, spilling a little of his “coffee” down his chin. He licked it off. “How the hell did you get in here?”

Jamie Ampton, newly-appointed head accountant for Jamesburg, and full-time were-bat, unfolded gracefully from the ceiling and lowered herself to the ground in front of Erik’s desk. “Oh, you know,” she said. “We always manage to get into places you thought you closed.”

So quickly that Erik barely noticed, Jamie snatched the cup out of his hand and took a drink. “Whew,” she said, squinting. “How do you wolves do this and not spend half of every day recovering from the day before?”

“Have fun on the honeymoon?” Jamie asked, grinning at the mug in her hand. “Sea World? Really? So you actually
are
a child, then? Did you have one of those fake ice creams shaped like Shamu?”

Erik instinctively gave her one of his cocky half-grins. “Don’t hate, Jamie. It’s the simple pleasures that matter most. Fake ice creams, making love to your mate, holding hands under the stars... you know; the simple things.”

With a comically smug look on his face, Erik nodded. “Shamu was awesome, by the way.”

“Uh-huh,” Jamie said flatly. “Look, I hate to spring this on you right when you came back, but there’s a problem.”

“Yeah?” Erik asked, taking his mug back, shooting Jamie a nasty glance and taking another sip. “Want some?” he offered his spiked coffee cup to Jamie.

At that, Jamie sneezed, then she laughed. “As much as I’d like to start the party at... quarter past nine in the morning, I better say no.”

“Anyway, what’s the problem? Don’t tell me Jenga’s somehow out on bail and making trouble again?”

Jamie snorted a laugh. “No, nothing that easy to handle, I’m sorry to say. I’m not really sure who you’re going to fight to solve this, but...” she dropped a manila envelope marked POLICE REPORT on Erik’s desk. “You need to pay attention to this, Erik, and quick.”

Erik’s leadership style was brash and headstrong. He preferred it when problems could be solved by beating the ever-living hell out of whatever the problem was, or whoever was the cause. He was about as subtle as a derailed locomotive, someone had once said, though he forgot who.

They were right though, and he always liked that line, because locomotives were, in Erik’s mind, really, really
cool
.

“Fill you in? What is this?” Jamie sneezed out another laugh. “Jamesburg is a lot like Twin Peaks, I’ll give you that, but you’re no Agent Cooper.”

Erik pursed his lips. “Just the facts, ma’am?” he asked.

Jamie put her hands on her hips and sighed. “You’re an
infant
child, not just a normal child,” she said, stifling a laugh.

Just then the door to his office opened. “Ah,” Erik said. “See, Jamie? That’s the right way to come into a room. Izzy!” he reached out, grabbed his mate’s hand and pulled her to him, twirling around in a mock dance.

“I figured Erik was up here anyway, so it’d be unlocked. I was just going to clean my office out some before next week.”

Since it wasn’t exactly a great idea for the alpha and his assistant to be mated, Izzy got herself a new job. Being city auditor came with a big office upgrade, so she was moving out of the closet next to Erik and into a big open place down the hall.

“Hmm?” he kissed her neck on one side, then the other before Izzy batted him off.

“You giant letch,” she giggled, twisting away from him. “Do me a favor?”

“Don’t forget lunch, all right? My parents are excited to meet you.”

She turned and left, Erik unflinchingly and unashamedly watching her curves swish out the door.

“They’re just passing through,” Erik said, distracted by Izzy’s hips. “What’s in the folder you dropped on my desk?” His mind, she knew, was about a billion miles away.

“Well,” she offered, “it says police report on it.”

Erik let out a heavy sigh. “She’s incredible, isn’t she?” he asked. “Just... I mean after the two weeks we just spent, I still can’t keep my mind off her.”

“That’s great, Erik,” Jamie said. “Yes she is, Izzy is awesome, and you have a police report on your desk. Three girls got kidnapped two days ago.”

“Wait, wait, wait,” Erik said, sitting up straight. “Why didn’t you say something earlier? This is...
three
of our girls are missing?”

“Two of the girls are from Clinton, down the road. They weren’t... you know, weren’t like us. Meaning, they were just normal humans. The other was a country girl – a panther – from outside town.”

“The Scottish one? Fergus’s daughter?”

Jamie nodded. “I’m not sure if whoever it is that took her knows what he got.”

“Shifter, you mean?” Erik asked, taking another sip of his coffee and rifling through the papers in the folder. There wasn’t much in there Jamie hadn’t already told him.

Details were sketchy, no suspects, all of the kidnapped girls were between fifteen and seventeen.

“I assume the hyenas are looking into it already?” Erik asked.

In Jamesburg, Hyenas were the police. Their tenacity and their... unwillingness to ever give up, ever, made them perfect for the job. The town hyena families had made it a point of pride that they were unflinchingly good at what they did.

Jamie nodded. “Been looking since the first report came from Clinton. But there’s just nothing to go on.”

After they sat there for a moment, Erik thanked her. “Yeah,” he said. “Doesn’t make any sense. I mean why grab a girl from here? Two from Clinton? Unless the idea is just to hit towns no one will ever notice. And you’re being strangely cavalier about this.”

Jamie shrugged. “Nothing I can do. I feel bad for them, but the hyenas are working the case, and there are cops from Clinton poking around too. I’d just be in the way. Anyway,” she said, “I have to go get ready. Big fight tonight, huh?”

Erik quirked a scarred eyebrow. “You’re going? How did you know, anyway?”

“That sleazebag crocodile who was in here twenty minutes ago has been putting up signs all over town for a week. Big fight, big night! I’m surprised you haven’t seen any of them, but Duggan’s been going crazy pulling them down.”

Duggan, the part-time city manager, part-time professor, and full-time hedgehog went nuts over most anything. But he went the
most
nuts over people blatantly disregarding city ordinances, such as nailing advertisements to phone poles.

Erik sighed. “I’ll get him some Xanax. But seriously, you’re going to a fight? I thought I’d never see the day.”

“Yeah, well,” Jamie said, walking toward the door. “There’s a lot you don’t know about me, even after all these years. You gonna come watch it?”

Erik looked through his door into Izzy’s office. She was still swishing around, and once again he unashamedly stared at her. His eyes were hungry as he took another drink. “No,” he said. “I think I’ve got something better to do.”

“That sounded wrong,” Erik said. “Or maybe it didn’t. Either way, I’ll see what I can find out about this case. And Jamie?”

She spun on her stiletto-clad heel and raised an eyebrow.

“Thanks for holding the place down,” Erik said. “It’s good to know I have someone I can count on when shit gets real.”

“Anytime, boss,” she said with a grin. “Though I’m not sure I could punch a zombie’s arm off quite the way you can. I’d sure give it a try, though.”

Her chuckle echoed off the walls, accompanied by the
clip-clop
of her heels. Erik stuck his head out into the hallway a few seconds later, and looked both directions.

“Izzy!” Erik hissed, making sure to check the ceilings this time. He’d made that mistake more than once. “Izzy!”

“Yeah?” she asked, without turning to face him. She was still shoving stuff into a box on her chair. “What’s up?”

He was already unbuttoning his shirt when she turned around.