Read Because of You Online 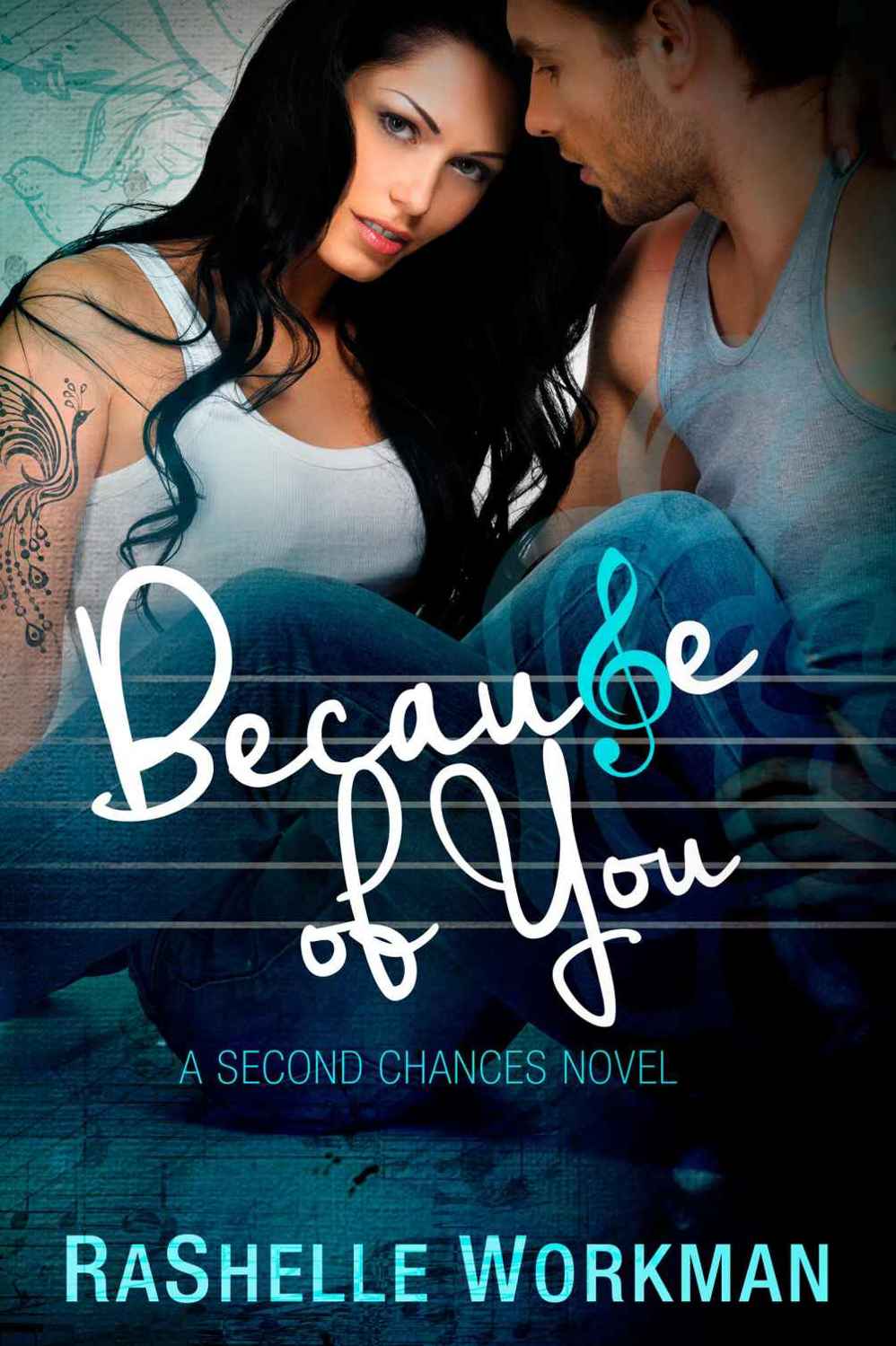 All rights reserved, including the right to reproduce this book or portions thereof in any form whatsoever. For information about Subsidiary Rights, Bulk Purchases, Live Events, or any other questions - please contact Curiosity Quills Press at
[email protected]
, or visit
http://curiosityquills.com

he tattoo studio is covered in art. It’s on the walls, the worktops, everywhere. Two patrons are sitting in black chairs while the artists do their work. The repetitive buzz of the guns jabbing needles into skin over and over fills the room.

One of the clients is getting a word tattooed on his left bicep. Not sure what it says, but the artist has completed an F and is working on the U. The other guy’s ink is nearly finished, a blade with a snake winding around it. Both men have blank, faraway expressions.

I know that look, and I envy them momentarily.

I follow Tony through the open area and down the hall. He closes the bright yellow privacy curtain and faces me. “Maddelena, right? Take off your shirt and lie back.”

“It’s Maddie,” I say chewing on the inside of my cheek.

I’ve done this before, but I’m still edgy, mostly because Tony’s a new guy. Raffie, the guy who did my other tattoos, is on a required leave of absence and won’t be back for three to five years—two with good behavior. I can’t wait that long.

He grunts his acknowledgement.

Taking the scrunchie from my wrist, I pull my dark hair into a high bun. Yank off my gray tank, exposing pale skin and a white bra. I grimace at the cold air. It makes my skin tighten, prickle with goose bumps.

I’m grateful. Because I know what happens next. I’m anxious. Excited, even.

Today is an anniversary, and not one filled with cake, balloons, and good feelings. Seven years ago today I found their bodies. Seven years ago I found them dead. It feels like yesterday. The pain is raw and rips at my heart. Scratching. Shredding. My lips and hands tremble at the memory. It’s going to swallow me, eat me alive from the inside, claw through my sinews like a deadly virus.

I want to shout at Tony. Tell him to hurry. Scream, “I can’t take any more!” I need pain to redden my skin, make the outside hurt as much as the inside.

His brows crunch together and he’s staring at me, at my already inked-up skin.

“Is there a problem?” My teeth are clenched. They have to be because if I open my mouth, something other than words will come out. Sobs. Or worse.

His lips press together in a thin line. “No,” he answers, but his attitude tells me he’s lying.

I take a deep breath. Lay back in the dentist-type leather chair. By the look on his face I know he isn’t concerned with the pain thrashing inside my body. He can’t see that. He also isn’t looking at my barely B cup breasts.

His eyes are focused on my other tattoos. I already have four. Obviously he really checked my driver’s license to verify age. I’m barely eighteen.

He sits on a rolling stool and turns away, muttering in Spanish. He’s a big guy, brawny, and is wearing a white wife-beater with holey faded jeans. His face is all hard lines, bushy eyebrows, and thick lips. On the bridge of his nose is a pair of thick black glasses, and over the tank is a tan, buttoned sweater.

There’s only so much you can tell about a person from the way they look. Clothes can be deceiving, as can the way a person does their hair, or even the makeup they wear. One thing I’ve learned though: if the eyes are the windows to the soul, then shoes are the official gatekeepers. Tony is wearing black flip-flops.

It’s like he can’t decide between nerd and hottie. The weird thing is the look works on him. He has a tattoo of a dragon along the back of his neck. It’s breathing fire, one eye staring at me. And I can almost hear the condemnation. The words Tony can’t say because it’s none of his business.

Plastic tears away from plastic, and then there’s a snap of surgical gloves. More tearing plastic, and he’s pulling out gauze. He squirts rubbing alcohol on it. The smell tickles my nose. It momentarily drowns out the stench of old cigars and Chinese food from the restaurant next door.

“You want it here?” He presses one gloved finger right below my belly button, in the place we’ve already discussed.

I look down anyway, to verify. “Yep, that’s right.”

He rambles something in Spanish as he wipes the area with the wet gauze. It’s freezing, and my body automatically tenses before I allow myself to relax. It’s coming. The bracing, all-consuming pain. Soon it’ll hurt. It’ll hurt so bad that after a while it’ll stop hurting, and I’ll be numb. I’ll be numb everywhere.

He nods, and his eyes rake over my other tattoos.

The first is a quote inked in calligraphy:
I love because I am loved.
It sits below my bra on the left side of my torso. The second is in the same place under my right breast. More writing, this time in cursive, but the words are less sweet.
I am nothing.
The third is below it, on my ribcage. The kanji symbol for hate. I’m hoping he doesn’t know what the character means, but something tells me he does. The fourth tattoo starts at my left hip. My pants cover part of it. Five stars. The first is the largest. They get smaller as they go up, past my waist, the final star resting on a rib.

The tattoo Tony is doing today will be fully colored. The first tattoo I’m getting with color. It’ll be an iris flower—a symbol of faith—with thorn-covered vines curling on either side.

More plastic ripping and then he brings over a razor. “I’d walk you through the steps, but it looks like you know the drill.” His words are filled with accusation. He doesn’t approve.

I raise an eyebrow, waiting for him to spill his thoughts. He wants to, I can tell. He wants to ask me why someone too young to have a single tattoo would already have so many. Why I would subject myself to such permanence at such a young age?

Instead he grumbles words I don’t understand as he runs the disposable pink razor over my skin. When he’s finished, he tosses it in the trash and wipes the area clean with more icy cold gauze.

The alcohol dries quickly, disappears. I wish my pain could vanish that easily, but it can’t. It won’t.

Tony takes the paper transfer of the iris drawing he’s created on his computer and places it on my skin. Then, just like a press on tattoo, he rubs it on. When he pulls away the paper, I glance at the flower.

He looks at me. “Is that gonna work? Last chance.”

“It looks great,” I say and lean back, allowing my head to rest against the chair. I could tell him to put it anywhere, as long as it’s on my body quickly. Because the truth is, I don’t care about placement. For me, tattoos aren’t about the art. Inking my body isn’t my form of expression. It’s about pain. They are my medication. When it’s over I’ll be able to breathe easier. It means I’m healing. Getting better. Another year of living while my parents haven’t.