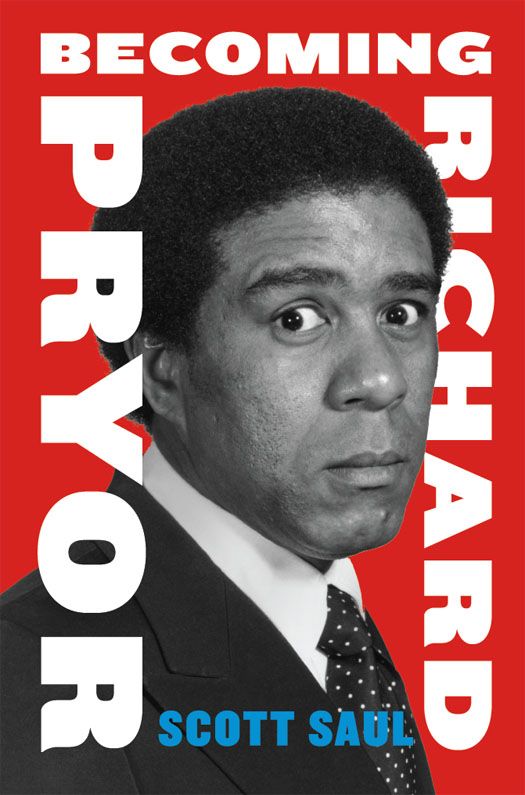 A trickster does not live near the hearth; he does not live in the halls of justice, the soldier’s tent, the shaman’s hut, the monastery. He passes through each of these when there is a moment of silence, and he enlivens each with mischief, but he is not their guiding spirit. He is the spirit of the doorway leading out, and of the crossroad at the edge of town (the one where a little market springs up).

The world around us is crumbling to make way for new life.

PART ONE: UP FROM PEORIA

CHAPTER
2
The Backside of Life

CHAPTER
3
The Law of the Lash

CHAPTER
6
The Measure of a Man

CHAPTER
7
In Search of Openness

CHAPTER
10
The Person in Question

PART THREE: IN THE HOUSE OF PAIN

CHAPTER
11
The King Is Dead

CHAPTER
15
The More I Talk, the Less I Die

CHAPTER
18
Number One with a Bullet

PART FIVE: THE FUNNIEST MAN ON THE PLANET

CHAPTER
19
Every Nigger Is a Star

CHAPTER
21
A Man of Parts

CHAPTER
22
Giving Up Absolutely Nothing

CHAPTER
23
Can I Speak to God Right Away?

O
n Monday, March 19, 2007, at 11:00 a.m., I drove up a hill to the parking lot of the Phillip and Sala Burton Academic High School, where I took in a startling view of San Francisco from its southeastern corner. The public radio station KALW was housed within one wing of the school; I had an appointment to meet Alan Farley, a KALW DJ who, thirty-six years earlier, had been Richard Pryor’s housemate in Berkeley.

Farley welcomed me to the station. His face was framed by a full head of white hair that he parted down the middle; he spoke with the silky grace of an experienced DJ and the quavering tones of a man in his seventies. Farley was one of those intercessors whom biographers dream of finding. He had stuck close to Pryor in 1971, recording for posterity everything he could and carefully labeling and dating each reel-to-reel tape. At KALW, he spread out before me eight hours of unreleased Richard Pryor recordings. I couldn’t take them home, but was allowed to listen to them in Farley’s presence and make notes. As I recall, Farley spent much of his downtime that afternoon lying on the radio station floor—he was suffering just then from a debilitating attack of gout—while I tapped out page after page of notes on my laptop.

My listening session with Farley was the culmination of a
two-month quest to figure out what had happened during Pryor’s enigmatic, if crucial, sojourn in the Bay Area. Pryor himself declared that he’d reinvented himself in Berkeley, experimenting with his act as never before, but he was fuzzy with the details. His previous biographers couldn’t even agree on when he landed in the Bay Area. They placed his arrival somewhere between 1969 and 1971—somewhere between, that is, his beginnings as a winsome comedian in the mold of Bill Cosby and his breakthrough as the most fearless stand-up comic of the 1970s.

Since I was based in Berkeley, I’d begun my Pryor research by delving into this mystery. I interviewed those who had known him and scoured various archives for the traces he left. (It turned out that he spent seven months, February to September 1971, in the area.) I discovered that Pryor had DJ’ed a bit for KPFA, Berkeley’s Pacifica affiliate, and it was that station’s archives that led me to Farley; over the course of a ninety-minute interview, he revealed, among other things, that he still had his cache of Pryor-related tapes. So we arranged the rendezvous at KALW.

The tapes offered a fascinating jumble of material. They encompassed Pryor’s programs on KPFA, his concerts at local clubs, his ideas for unproduced screenplays, his attempts at spontaneous poetry, and even an avant-garde sound collage. Listening to them over the course of a long afternoon, I could hear how Pryor, having come to Berkeley without a clear sense of his future, had absorbed the countercultural energies of his new home and tried out different versions of himself: serious actor, guerrilla filmmaker, poet, political satirist. His struggle was that of an artist searching for his true medium, not of a comedian polishing his material. He sparred with his audience; he riffed to himself; he spun out wild scenarios for films that seemed unfilmable. His Bay Area interlude, formerly hazy, now popped into focus. I felt I’d been raptured to Biographer Heaven.

The “Farley tapes” launched me on a quest to understand Richard Pryor anew—a quest that has pulled in biographers before me and no doubt will pull in others in the future. A man burns himself
up as he ascends to the sky: this is the myth of Icarus, the story of Richard Pryor, and a tale whose meaning begs to be unraveled. Pryor revolutionized American comedy with his improvisational approach, his frank talk about sex and race, and the psychological depth that he brought to the stand-up stage. Consigned to bit roles and cameos in Hollywood, he improvised his way, literally, to become a top box office draw and the most powerful black movie star of his time. Meanwhile, he led his life with the same incisive imagination that he poured into his comedy, and with the same gamut of troubling emotions. He was intensely memorable: those who spent time with him tend to spill over with stories about this or that incident, quip, or cutting remark. And since Pryor’s comedy was frequently autobiographical (in fact, he might be said to have
initiated
the autobiographical turn in stand-up comedy), there’s a justifiable sense that the secret to his genius must be located within the story of his life. We long to know how he turned the confusions of his life into the complexities of his act—and how the brilliance of the act was not enough to save him.

At the same time, Pryor has proved to be an elusive quarry for the biographer. For all his openness about his life onstage, he was guarded about the facts of it offstage. He hated the standard format of Q&A interviews. Often he refused to play it straight with reporters: asked about his comedic influences, he might offer up J. Edgar Hoover. During his heyday, he wanted to reserve for himself the prerogative to tell his own story on his own terms. Even late in his life, he had the same proprietary sensibility: when film critic Elvis Mitchell tried pitching a major Pryor biography to publishers in 2004, an ailing Pryor announced he would scoop him by pitching a second memoir of his own.

Pryor’s earlier biographers ran into another sort of wall when they tried to fill out his story by approaching his family with questions about his background. Pryor’s elder relations were tight-lipped with outsiders to the family—a habit of circumspection they’d acquired from years of operating in Peoria’s underground economy, where much business was kept off the books. When, in 1983, the
Pryor biographer John A. Williams hired a private detective in Peoria to get his bearings on the world of the Pryors, the detective warned him off the enterprise and confessed that he’d found little. “It’s hard to get information from these people,” he said. “It’s hard even to find them.”

Given the caginess of the family and of Pryor himself, earlier accounts of his life left unexplored the space between how Pryor understood his life as it unfolded and how we readers might understand it in the fullness of history; the legends of his life tended to be burnished rather than scrutinized and investigated. John A. Williams was the one early biographer who challenged Pryor’s own account of his life, refusing to take it on faith. He wouldn’t believe, for instance, that Pryor grew up in brothels unless he could independently confirm the fact. He tried to contact the Pryor family; they rebuffed him. He tried to find a record of the Pryor “family business” in the
Peoria Journal Star
and city directories, and came up short. So he came to question this most basic fact of Pryor’s childhood. It was a bold stand—and a wrong one, as my own research has established. But it’s easy to understand why, given the smokescreen he passed through, Williams might have suspected that there was, in fact, nothing to see beneath it—that the smoke was all there was.

This book is different from other Pryor biographies. It’s different partly because it was written in a different, freer moment than the earlier ones that were published in Pryor’s prime. By the time I began my research in 2007, the elder Pryors had passed away, as had Richard Pryor himself, and any statute of limitations had run out on the illegalities of the 1940s, ‘50s, and ‘60s. Younger relatives of Pryor, such as his two half-sisters, were willing to share their memories. And there were many more people, friends and lovers and collaborators of Pryor, who wanted to talk, too—to fill in the gaps in Pryor’s own account of his life, or add a missing dimension, or dispute some piece of it. This book is built, in no small part, on the memories of the eighty-some people I have interviewed, many of whom were generous enough to speak for hours, and often over several days, about Pryor. From
the person who literally shared a crib with Pryor to the musicians who played behind him at his first club dates; from those who acted alongside him in Hollywood to those who tried to build a life with him—these were my sources, and their contribution to this book has been essential.

The book is different, too, because it approaches Pryor as a historical figure and uses a historian’s tools to reconstruct his life and unpack its meaning. Pryor and his family were powerfully dramatic people, and the drama of their lives left an extensive paper trail—though often the documents were not so easy to locate. I needed to constellate my own “Pryor archive,” since Richard Pryor, for all his gifts, was not exactly the most punctilious record keeper; he left no set of papers on deposit. To fill out the story of Pryor’s early years, I combed through old issues of newspapers like the
Decatur Herald
, the
Peoria Journal Star
, and the
Chicago Defender
; I asked the Peoria county clerk to dig up the divorce records of Pryor’s parents and any records of criminal proceedings that involved his family; I procured, with the help of his widow Jennifer and the respective registrars, Pryor’s school and army records.