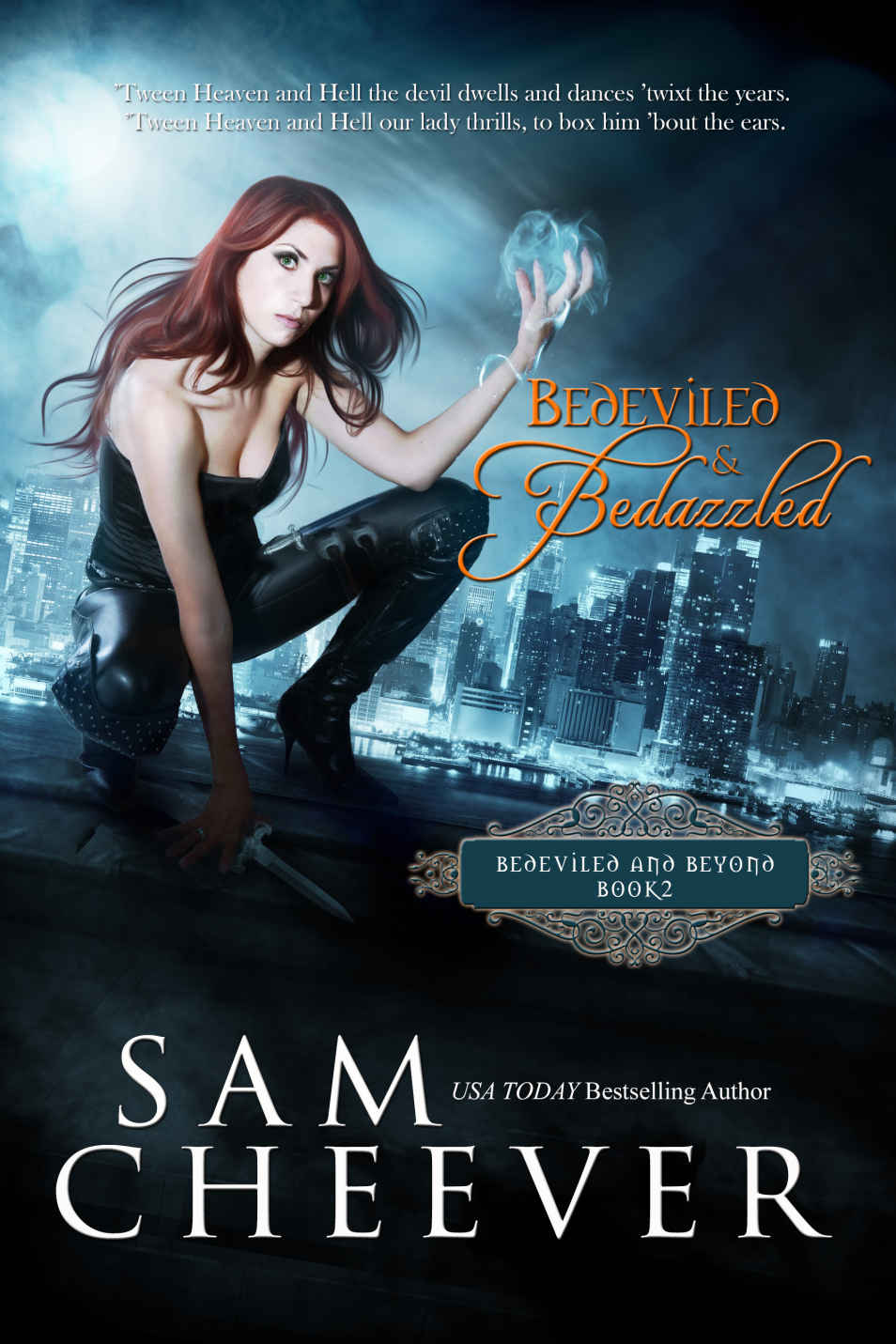 With sexy devil Prince Dialle at her side, Astra Q Phelps finds herself embroiled in yet more danger and intrigue at the royal devil court. As Astra discovers her family tree might be growing right in the middle of the current mess, her career as a demon slayer is put at risk, her dignity is seriously damaged, and there might be a pair of giant granny panties in her future. Fortunately for her she doesn’t have much need for dignity. It's a whole mess of trouble for one determined halfling to sort through, but Astra Q Phelps is...hopefully...up to the challenge.

’Tween Heaven and Hell the devil dwells and dances ’twixt the years.

’Tween Heaven and Hell our lady thrills, to box him ’bout the ears.

Devils and demons were never meant to walk among humans. But about thirty years ago, in 2060, the human race went berserk and started blowing each other up willy-nilly. Unfortunately, in addition to creating some really big holes in the Earth and themselves, humans unwittingly unleashed a horror much deeper and more terrifying than anything they’d ever encountered before. Something eminently evil used the resulting chaos to slither its way into the world. This evil was the stuff of human nightmares, previously only touching the human race through hysterical musings or tragic bouts of imagination. But what humans didn’t know was, this evil had always been out there, in a parallel dimension, if you will, watching the show and waiting for its turn to join in the fun. And every once in a while, when the humans’ defenses were particularly low, this something would reach across that barrier and tweak them a little. Which explains things like dental care, Brussels sprouts and bell-bottomed jeans.

Once the purveyors of evil found their way into the human dimension, God had no choice but to send his angels in to keep an eye on them. Several minor skirmishes have already been fought between the forces of good and evil since that time thirty years ago when the first demon snuck through our defenses. The angels, with the Big Guy at their backs, are winning the battles so far but the outcome of the war is still uncertain.

About ten years ago, God started using halflings to help the good side out. The only problem with halflings is that, by their very make-up they are some portion devil. That’s why they understand and know how to defeat the forces of evil. But it is also what has made them a little bit unpredictable.

What exactly is a halfling you ask? A halfling is a non-human. They have neither wings nor horns but they generally have both angel and devil in their family forests. Which is probably why they enjoy a higher sensitivity to spectral influence than regular human-type people.

My name is Astra Q. Phelps and I’m a halfling. Don’t ask me what the Q stands for because if I tell you I’ll have to turn you into atmospheric gas. I've burned all printed documentation of the name and though a lot of my enemies have tried to dig it out, no one will ever know what it stands for. A girl has to have some secrets. Especially when the truth would cause her some serious embarrassment.

I run a business called the Angel Network, which is the only devil and demon locating and destroying business in the universe. In other words, I kick serious evil butt for a living. But enough about me. You probably want to hear about how I saved the world from the attack of the killer demons don’t you?

Oh well, what can I say, I’m a pretty important creature. Apparently many things are about me.

Alas our halfling finds herself, in the fiery clutch of Hell,

Her sexy hero’s cursed bonds, do cause her plight to swell.

The hallway we traveled was long and well lit. Both sides were lined with heavy wooden doors and above each one was a wall sconce that emitted a soft, yellow light. The carpet beneath our feet was impossibly white and thick enough to sleep on. The air gave off a heated, slightly musky smell that told me the huge stone building was filled with otherworldly types.

I struggled to keep up with the two devils, my much shorter legs pumping furiously. Occasionally Dialle would reach back and tug on my hand to pull me forward. In full disclosure, I’d have to admit that some of my slowness probably wasn’t due to my height. Whenever I got behind I ogled my devil’s taut, yummy buttocks. Once he caught me looking and laughed. Heat flared in my cheeks but—knowing that the best defense was a good offense—I glared back at him defiantly, daring him to comment.

Gerch turned a corner and I found myself in another endless hallway that looked much the same as the first one. That hallway turned, eventually, into a third hallway that finally ended beyond a gilded archway filled with armed guards and a harem of beautiful women, both devil and fallen angel. The guards stood at rigid attention on either side of the archway and both sides of the huge, gold-plated doors in the center. The women lounged on chaises and were flung across long, backless divans. Their sheer robes shimmered in the soft yellow light, softly draping their gold and silver flesh

Glancing at the women as we flew past, I frowned. “What’s with the harem?”

Dialle gave them only the merest glance as we entered the alcove created by the arched entranceway. “They vie for the king’s attention. He is supposed to be choosing a new queen but he apparently suffers from the human condition called ADD. He can’t seem to focus on one woman for any length of time.”

I sensed Dialle wanted to say more but Gerch pushed one of the gilded doors inward and Dialle’s attention was forced elsewhere. He drew himself up with a sigh and grabbed my arm. “Come, my father is a very impatient creature.”

Dialle led the way through the gilded doors. He pulled me into the room behind him and all but dragged me to his side, where he immediately put an arm around my waist and proceeded to rip my mental drawers open.
Show no fear Astra
.

What’s to fear?
I responded in a negligent mental tone and he turned to arch a midnight brow at me.

You are teasing me right?

King Dialle the First stood across a cavernous room in front of wall-to-wall, floor-to-ceiling windows that looked out over an Angel City skyline which sparkled in the distance. He stood with his back to us, his hands folded behind him and his long, muscular legs braced apart in a warrior’s stance. His silky black hair flowed down his back, stopping just where perfectly sculpted buttocks rounded out from a narrow waist. The hair was loose except for the last six inches, which were tied together in a thick bunch with some kind of leather tie. He wore white leather leggings that fit his well-muscled legs and perky round buttocks like a second skin and nothing else. As he turned I noticed a large tattoo shaped like a pitchfork on one muscular biceps. I smiled.

His face could have been designed in heaven. Well, actually it was. The golden brow was wide and clear, with a thick mane of hair flowing back from a widow’s peak at the center. His eyes were deep-set, narrow and very sexy. His nose was long, tapered and straight. The jaw was square, with just a tiny bit of black stubble on it that made him look dangerous and hot. He had high, strong cheekbones, like his son but when he grinned, as he was currently doing, his cheeks creased with matching dimples that made certain places on my body tingle. His shoulders were broad and his chest was a smooth, hairless, golden color, deeply muscled.

The king’s black-velvet gaze slid past his son and fixed on me. “Alas, behold my queen.”

My devil stiffened beside me and his arm tightened on my waist. “Father, I’d like you to meet
my
future queen. This is Astra.”

King Dialle arched one perfectly shaped black eyebrow at his son and then dismissed him, sliding his eyes back to me. “You are the halfling?”

He nodded once. “I had heard you were lovely. I admit I didn’t believe the reports.” He eyed me up and down once more. “Now I realize I should have been paying better attention.” He slid his gaze back to his son, who had grown increasingly agitated as the seconds ticked by. “Perhaps you will need to find...another...queen my son. I may need to explore this one for myself.”

My Dialle huffed out a breath. “Stop baiting me old man. You know as well as I do that you cannot settle on just one woman.” He tugged me a little behind him and stepped forward, all in one smooth motion. “This woman is mine. She bears my mark. I did not come here to joust with you. I await your instructions.”

I glanced at my Dialle but his face was closed. Except for a muscle working in his beautiful square jaw he showed no emotion. I tried to initiate a trip into his mental drawers but he slammed them shut on me. Obviously he and his father didn’t have an easy relationship. Interesting but not too surprising given the devil factor.

The king narrowed his gaze on his son but apparently decided to let it go. He turned and strode arrogantly toward a desk in the far corner of the room. How funny. A devil king office. Imagine that.

He sat down in the throne-like white leather chair behind a huge desk made of what appeared to be black onyx and looked at us expectantly.

I made a move as if to sit too but my Dialle stopped me with a hand on my arm. Then he pulled me into his side and wrapped his other arm around my stomach, a slight cocking of his head the only sign that he was prepared to listen to the king.

I struggled to pull away but Dialle tightened his arms around my waist and said,
Stop. We need to have a united front against my father or we’re both...toast...as you would say.

Realizing he was right, I stopped struggling. Better to have one powerful royal devil on your side than fight two of them. I leaned closer to Dialle and wrapped my left arm around his stomach. One united front coming up.

The king scowled but finally turned to the door. He spoke to Gerch, who had, apparently, followed us into the room. “Remove yourself. If you value your life you’ll keep everyone away from that door after you close it. What I have to say is not to be overheard.”

The Rembrandt Affair by Daniel Silva
Satan's Lullaby by Priscilla Royal
Ruby (Orlan Orphans Book 2) by Kirsten Osbourne
No Holds Barred by Callie Croix
The Many Worlds of Dean: Book 1 - Mars by Eric Hodgkinson
The Quick and the Dead by Gerald Bullet
Tess Stimson - The Adultery Club by The Adultery Club
No Friend of Mine by Ann Turnbull
Kill the Dead by Tanith Lee
The Perfect Wife by Victoria Alexander