Read Before He Wakes Online 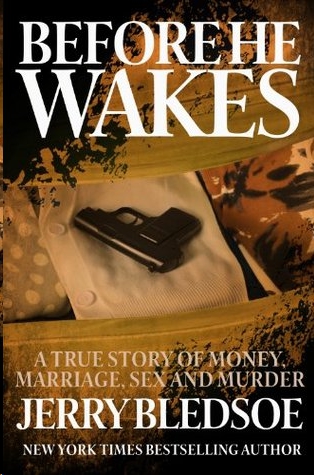 A True Story of Money, Marriage, Sex and Murder

Copyright © 1994 by Jerry Bledsoe
All rights reserved, including the right to reproduce this book or portions thereof in any form whatsoever.

The heart is deceitful above all things, and desperately wicked. Who can know it?

An Incident on Fox Drive

The hour before dawn was always the quietest. Criminals had retired for the night, and most decent citizens were not yet up to crash their cars, start fires, get into squabbles, have heart attacks or find other ways to create havoc. This was the time for police officers to take a break, catch up on report writing or stop for coffee and early breakfasts.

The city of Durham, North Carolina, was just beginning to stir to a new work week on this Monday morning. High-intensity lights still cast an orange glow over nearly deserted downtown streets. The sweet, pungent aroma that always hovered in the air of the second-biggest cigarette-making city in a tobacco state was even stronger than usual this morning, held close to the ground by low-lying clouds. Dawn would come gray and damp, unusually warm for a day so deep in winter.

In the basement of the Durham Police Department headquarters, the five dispatchers who received all of Durham County’s emergency calls had no hint of the weather outside. Isolated in the glass-enclosed radio room, they were nearing the end of their twelve-hour shift, wondering if six-thirty would ever come. Radio traffic had all but died, and there had been no telephone calls for more than an hour. The dispatchers were beginning to unwind. Normally they would have been chatting about the events of the night, but this had been a quieter night than usual, leaving them nothing to discuss. To fill the void, Terry Russell started to tell a joke he’d heard the day before. He was interrupted by a light that began flashing on every console, accompanied by the irritating buzz of the 911 emergency line.

Barbara Parson was first to reach to stop the noise by punching the flashing button. “Durham County nine-eleven,” she said.

“Can you send an ambulance to twenty-eight-thirty-three Fox Drive?” asked a frightened and plaintive voice so high-pitched that Parson thought she was talking to a young girl.

“What’s the problem?” she asked, reaching for an ambulance dispatch card. She could tell that the child was terribly upset, and as a mother she felt the little clutch at her throat that always arose when a child in trouble called.

“My father had a gun and it went off.”

“Is he conscious?” Parson pressed. She had to have information for the emergency medical technicians so that they would know what to expect. It could mean the difference between life and death.

Durham County had not yet turned to computers for its dispatch room, and as Parson had been talking into her headset, she was wheeling her chair toward one of the two big circular files in the center of the room. The files contained the locations of every street and road in the county. She quickly thumbed up Fox Drive, only to discover that there were two in the county, and she had to question the child about nearby streets so the emergency vehicles wouldn’t go to the wrong location.

Turning to another console, she activated electronic tones alerting the Lebanon Volunteer Fire Department and Durham County Hospital Ambulance Service to an emergency. Before she hung up, her motherly concern caused her to ask one more question of the child.

Parson disconnected the line and called the Durham County Sheriff’s dispatch room just a block away in the courthouse to tell them about the shooting in one of Durham’s most prosperous northern suburbs.

A shrill, piercing beep stirred Doug Griffin from sleep. He reached instinctively for the pager in its bedside charger to keep it from waking his wife and two children.

An architect, Griffin felt a strong duty to community. That was why he had joined the Lebanon Volunteer Fire Department four years earlier and become a first responder. First responders were trained in basic emergency medical care. Scattered throughout the county, they could reach victims long before an ambulance arrived, giving first aid that greatly increased chances for survival. Helping to save lives gave Griffin deep satisfaction.

“Subject shot,” he heard Barbara Parson’s matter-of-fact voice as he climbed out of bed. “Twenty-eight-thirty-three Fox Drive.” That was only a few blocks from Griffin’s house.

A short, dark-haired man with a neatly trimmed full beard, Griffin pulled on a blue jumpsuit that he kept on a nearby chair for nighttime emergencies, slipped on jogging shoes and hurried outside into the misty predawn darkness. He climbed into his white Volvo, and as he was leaving his driveway, he picked up a red light from the seat beside him, plugged it into the cigarette lighter, placed it on the dashboard and accelerated into the empty morning streets.

The house on Fox Drive was set back from the road, hidden by a stand of trees and thick undergrowth, its presence marked only by a black mailbox at the foot of a long concrete drive, and Griffin drove by it at first. He realized his mistake and turned around in the next driveway. As he headed up the drive, he saw a modern house, one section of the front pointed like the prow of a ship, with huge angled picture windows set in a facade of brown and gray stone.

A boy barely in his teens stood just inside the open doors of the double garage at the back of the house. He looked as if he had dressed quickly and incompletely, and he was scared and bewildered, almost in shock.

“Who’s shot?” Griffin asked as he jumped from the car, but the boy said nothing.

Griffin asked again after fetching his hard plastic blue first aid case from the trunk of his car and heading for the garage.

“He’s in the last bedroom,” the boy finally said. “Go left, then right, down the hall.”

“You stay here and direct the others,” Griffin told him. Already he’d seen his department’s assistant chief, James Wingate, pull up at the foot of the drive.

Griffin had one cardinal purpose: reaching the patient and helping him. But as he entered the house through the kitchen, he was overcome by a feeling he later described as “spooky.” He had no idea who had been shot, how or by whom. Could somebody with a cocked and loaded gun be lurking there in wait?

The thought unnerved him, but he continued on, turning into a dark hallway, pounding the wall with his fist to announce his presence.

“Lebanon Fire Department,” he called. “Anyone here? Did you call an ambulance?”

As he neared the door at the end of the hallway, Griffin noticed that it was open a few inches. Suddenly a light came on in the room, the door opened and a disheveled and distraught woman in owlish glasses appeared before him. She was short and blond, maybe in her late thirties, wearing only a large red and green plaid flannel shirt that drooped from her narrow shoulders and reached well below her waist.

“Is someone hurt?” Griffin asked.

The woman gestured toward a king-size bed with a brass headboard, where a stocky, muscular man lay on his left side under a flowered bedcover.

The man was snoring loudly, and Griffin’s first impulse was to try to shake him awake, but as he rounded the end of the bed, he saw a bloodstain spreading darkly across the back of the pillow under the man’s head.

While the woman stood watching from the opposite side of the bed, Griffin felt for a pulse and found it racing wildly. The left side of the man’s head was buried in the pillow, his left eye obscured, and Griffin rotated his head slightly to get his nose and mouth out of the pillow and to check for breathing restrictions. Blood and mucus were choking the man, the blood oozing from his mouth and nostrils and running down the side of his face. Simply moving the man’s head caused his breathing to come easier, though, and Griffin reached into his kit for a blood pressure gauge.

James Wingate, a contractor and captain in the Lebanon Volunteer Fire Department, had left his pickup truck on the street with emergency lights flashing to mark the site for other rescuers. A rotund, balding neighbor of Griffin’s, he hurried into the room carrying his trauma box, an oxygen bottle, squeeze airbag and radio.

“Gunshot,” Griffin said. “Looks like it’s to the head.”

The man was unconscious, his eyes rolled back and dilated, his face ashen gray, but his body was warm and dry, with normal color. Wingate took out a clipboard and began recording vital statistics as Griffin called them out. Blood pressure was 170/120. The man was breathing at twenty breaths per minute. Wingate radioed the information to Barbara Parson so that she could relay it to the ambulance crew, which was on its way.

Wingate readied an oxygen mask, but it couldn’t be applied because of the bleeding from the mouth and nose, and he placed it on the pillow by the man’s head. Both men donned rubber gloves to search the man’s blood-matted hair for a wound so that they could control the bleeding, but they found only what at first appeared to be an abrasion behind the left ear. As they looked, the woman, who was now sitting on the foot of the bed, began crying, asking, “Why does he keep those things in here?”

“What happened?” Wingate asked her.

She told him that she had been pulling a gun out from under her husband’s pillow when it discharged. Her husband had been hearing sounds outside the house recently and was concerned about burglars, she said. The gun was for protection. He had put it under his pillow the night before. This morning, when she heard her son get up and go to the bathroom, she reached to remove the pistol in case her husband woke up and thought somebody was in the house. It just went off, she said.

Bob Hunt, another first responder, was the third emergency worker to enter the room. He immediately recognized the woman talking with Wingate. He knew the man in the bed, too. He was Russ Stager, forty years old, a member of his church and a popular coach at Durham High School.

Hunt was shocked. His wife, Brenda, had been friends since childhood with Russ’s wife, Barbara. But Barbara showed no sign of recognizing him.

As Griffin and Wingate turned Russ’s head to begin suctioning the blood and mucus from his air passages, the pillow shifted, and Griffin saw a pistol.

It was a small black .25-caliber semiautomatic Beretta with plastic grips, lying between the two pillows, the barrel aimed at his patient’s head. A spent shell lay only a few inches away.

Griffin saw that the pistol was cocked, a potential danger. He automatically reached for it, then caught himself. He had been drilled not to touch anything that might be evidence.

Still, Griffin’s training wouldn’t allow him to touch it. A Durham County Sheriff’s deputy, Clark Green, now entered the room. He had been on his way into town to refuel after a night of patrolling county roads when he heard the Fox Drive call. He had been concerned because he had friends who lived on the street. Racing to answer the call, he was relieved to discover that the emergency was next door to his friends’ house.