Read Before the Dawn (Truly Yours Digital Editions) Online

Before the Dawn (Truly Yours Digital Editions) 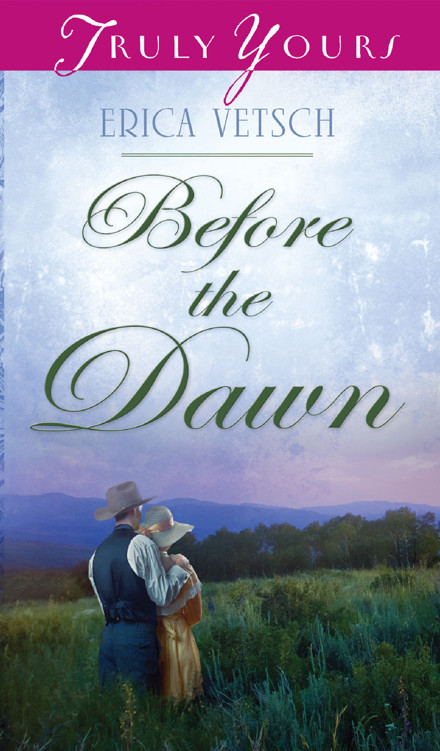 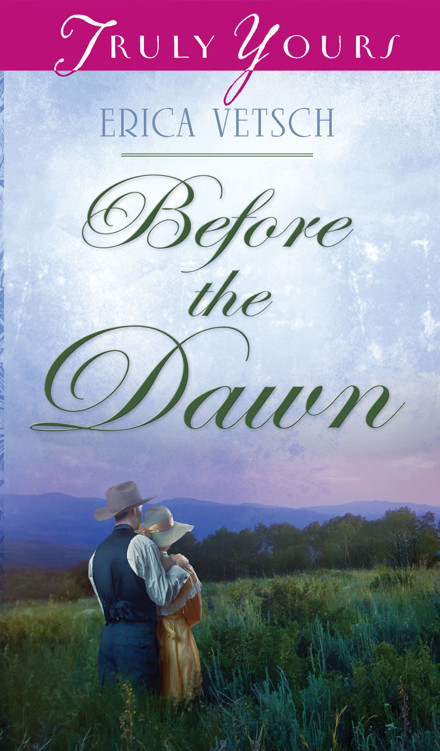 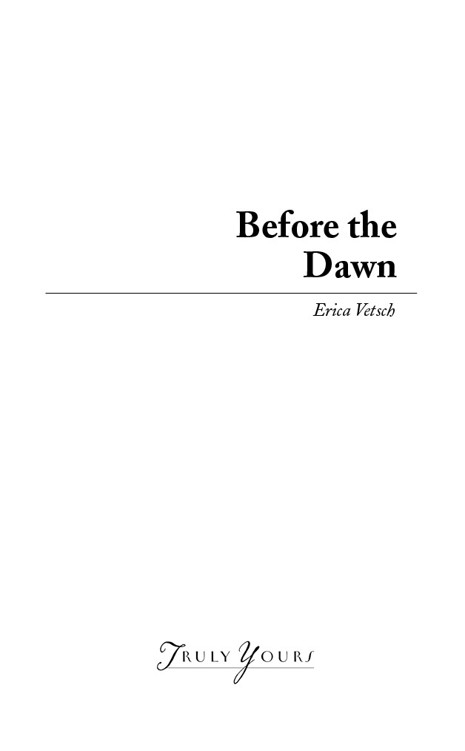 Copyright © 2011 by Erica Vetsch. All rights reserved. Except for use in any review, the reproduction or utilization of this work in whole or in part in any form by any electronic, mechanical, or other means, now known or hereafter invented, is forbidden without the permission of Heartsong Presents, an imprint of Barbour Publishing, Inc., PO Box 721, Uhrichsville, Ohio 44683.

All of the characters and events in this book are fictitious. Any resemblance to actual persons, living or dead, or to actual events is purely coincidental.

Our mission is to publish and distribute inspirational products offering exceptional value and biblical encouragement to the masses.

She checked the timepiece hanging on her lapel, comparing it to the solemn face of the Seth Thomas clock on the depot wall beside the ticket window. Her handbag toppled off the valise beside her, and she bent to pick it up. For three quarters of an hour she’d waited here like unclaimed baggage.

Behind his barred cage, the clerk shuffled papers and flicked inquiring glances from under his visor. His pinched mouth twitched, making his mustache stick out like a fussy mouse sniffing a trap.

Where could David be? Karen’s visions of a tender, warm reunion with her fiancé evaporated. She crossed her arms and stilled her tapping foot for the tenth time. The unease she’d been trying to ignore over his lack of communication during her absence renewed its assault. The two notes he’d sent the first week of her trip were everything a girl could desire in the way of love letters. Then nothing from him for three weeks.

She’d told herself no end of stories to explain things, but with each passing day, the doubts had grown.

Flap, slap, flap, slap.
The clerk worked a rubber stamp as if the papers might somehow escape his inky wrath.

Karen gathered her gloves, her bag, and her courage. She’d simply have to ask him to find her some conveyance after all.

The door crashed open. Whirling, she pressed her hand to her chest then let it drop to her side as she relaxed her tense muscles. Jesse Mackenzie filled the doorway, blocking out the weak sunlight. She offered her hands in greeting, though a tickle of unease scampered through her chest.

The large, gray-haired man strode across the station. “Karen, sorry I’m late.” He kissed her offered cheek, brushing her skin with his bushy whiskers.

“Mr. Mackenzie, what a surprise. I expected David.”

The older man rubbed his beard and didn’t meet her eyes. “Lots going on at the mine and at the house.”

The tickle of unease became a tremor. “Where
is
David?”

The clerk cleared his throat, and Jesse glared at him. “We’ll sort it out at the house.” He whisked up her bags as if they weighed nothing and headed toward the door. She followed in his wake, stopping to tug on her gloves and anchor her hat against the fitful, wind-tossed snowflakes gusting about.

The Mackenzie buggy stood at the hitching rail. Jesse stowed the luggage. Then he helped Karen aboard and let her get settled before spreading the lap robe over her skirts. Cold dampness flowed over Karen when he urged the horses into a brisk trot, and she pulled her cloak tighter. He lifted the reins. “Be time for the bobsled if this snow keeps up.”

The horses’ hooves made splashing plops in the muddy road of the main thoroughfare. Buggies, wagons, and saddle horses lined the streets. This late in the fall, the trees lifted bare limbs to the sky and the clouds bespoke more snow. Jesse’s coat collar stood up around his cheeks, meeting his hat brim at the nape. His gloves creaked on the reins as he slapped them against the horses’ rumps.

Karen wrinkled her nose at the familiar tang in the air. Black clouds billowed from the smelter smokestacks night and day. The streets teemed with men of varied nationalities, all drawn to this cleft in the high Rockies by the lure of silver.

When the buggy passed the county registrar’s, her heart squeezed a little. She missed the bustle of the office, the desk she had called her own, the neat columns and ledgers. Her boss had relied on her to know where every piece of paper in the office could be located. She had enjoyed the work, but she’d given it up for a very good reason.

Though that reason had failed to meet her train.

Her companion’s unusual silence forced the questions out of her. “What’s wrong, Jesse? Why didn’t David come? Is it something at the mine? Have you found a new ore deposit?” If another rich stope had been located, David, as the mine engineer, would have to be on hand.

Jesse shifted on the seat and urged the horses, though they were already trotting briskly. Bits of slush and dirt flipped backward, spattering the lap robe. “Sure is getting cold out.”

Fingers of dread formed a fist in her middle. She clasped her hand over one of his. “Please, just tell me what you’re trying so hard not to say.”

“I knew I should have sent someone else to pick you up.” He scowled as he muttered. “Or brought Matilda along.”

“There was an accident—” His shoulders hunched, and he shook the lines again. “Get up there.” His words came out in a frosty plume. “At the mine.”

Her chest turned frosty, too. An accident. She tried to swallow, but her mouth was slag-heap dry. “Was anyone hurt? Is that where David is? Helping with the rescue and clearing up?”

“The rescuing’s been done, and the clearing up, too, mostly.”

“Is he alive?” Air crowded into the tops of her lungs, and she couldn’t draw a deep breath.

Icy shock gripped the back of her neck. She shook her head, and blackness crept in around the edges of her vision. Gradually the mists in her head cleared. “What happened?”

“There was a cave-in the week after you left for your aunt’s. We had just deepened the shaft and started putting in the bracings and square sets when the whole support system gave way. We lost eight men, and another five, including David, were injured. David broke an arm and got hit on the head by a beam. He was senseless for three days. When he came to, he couldn’t see a thing. Sam was the one who pulled him from the wreckage. A terrible thing for one brother to have to do for another. Doc says the damage is permanent.”

Numbness settled on her, making her lips stiff and her limbs heavy. All the time she nursed her Aunt Hattie in Kansas City, David had been hurt, blinded. Her peeve at his lack of correspondence and his failure to meet her train melted away. What he must’ve suffered, and she hadn’t been there. “We should hurry home, then,” she said at last. “He’ll be worried if we don’t show up soon.”

Jesse winced. “Well, Karen, there’s one other thing I have to tell you. You see, David isn’t expecting you.”

“But I sent a telegram with my arrival date and time.”

“David hasn’t been himself since the cave-in. He dictated a telegram to release you from the engagement.” He shook his head, his shoulders bowed, his brow creased in morose lines. “David doesn’t want to get married anymore.”

The words hit like a physical blow. “I never received a telegram.”

Jesse shot her a glance, half-sheepish, half-defiant. “Truth is I didn’t send it, though I let him think I had.”

“Why not? Why didn’t someone tell me what happened?” Heat bloomed in her chest.

“Matilda can explain it all.” He shrugged, not looking at her. “I didn’t send the telegram because my son isn’t thinking clear. He seems to think—I don’t know, that somehow you won’t love him anymore now that he’s blind. I told him you weren’t like that, that he was selling you short, but he won’t listen. I figure you showing up might bring him to his senses.”

Karen’s imagination stirred up scenes in her head of the cave-in, of the dead and dying miners, of her fiancé, broken, wounded, imprisoned in blackness within and without.

Jesse remained silent and frowning until they pulled up in front of the Mackenzie house. Three stories of gleaming windows and gingerbread trim, balconies, turrets, and fish-scale siding rose from the hillside.

Karen leaned forward to glimpse the mansard roof with its widow’s walk, the very place David had taken her to propose. They had looked up to the rugged peaks rising all around them and planned out their future together that happy summer evening.

Jesse helped her alight. “You go on in by the fire. Buckford will see to the bags.”

She nodded to the faithful houseman who held the door for her. A welcoming blaze crackled in the front parlor fireplace. David’s mother, Matilda, rose from her chair and glided across the foyer, as graceful and regal as always. “Karen, my dear.” Lamplight raced along her dark-blond hair shot through with silvery strands. “I trust your aunt is on the mend?”

“Aunt Hattie is fine. She sends her regards, and she will see you in two months for the wedding. . . .” Karen’s voice trailed off as she looked to Jesse. He shifted from boot to boot and shrugged out of his coat.

He nodded, his shoulders slumped and his face more lined than Karen remembered.

Matilda gripped Karen’s hand. “At first we didn’t write because of the ongoing rescue attempts, and then nursing David. . .and the doctor held out some hope initially that the blindness would be temporary. But as more days went by, we had to resign ourselves to the bitter truth.” Matilda sighed. “I am sorry now I didn’t write to you immediately. I had hoped to spare you and be able to greet your train with the news that David would fully recover. Can you forgive me?”

Karen nodded. What else was there to do? Nothing could be changed now, and David was foremost on her mind. “Is he upstairs?”

Matilda shook her head. “He’s all but barricaded himself in the study, and no matter what we try, he won’t come out.” The starch and drive Karen always associated with Matilda Mackenzie had been replaced with uncertainty and despair. “We had hoped this anger and lethargy would fade, but he sinks deeper each day. I don’t know what to do anymore. I’ve never prayed so much in my life.”