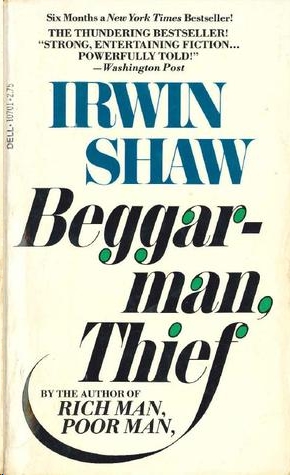 A Biography of Irwin Shaw

Many thanks to my editor, Kathy Anderson, for her invaluable assistance and advice.

To Jim and Gloria

Ordinarily there is no need for a preface for a novel, but because of the television presentation of “Rich Man, Poor Man” (Part I and Part II), I believe the readers of
Beggarman, Thief
should know that the new book is a sequel to the
printed
version of
Rich Man, Poor Man,
not the televised one, and any similarities to the Part II television offering are purely coincidental.

I hope this note helps clear up any confusion in the mind of the reader of this book who has also viewed either or both of the two television series. 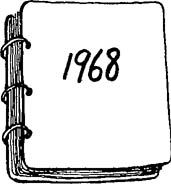 I AM WORTHLESS, MONIKA SAYS. SHE SAYS IT ONLY HALF-SERIOUSLY. MONIKA, ON THE OTHER HAND, IS NOT DEMONSTRABLY WORTHLESS. BEING IN LOVE WITH HER UNDOUBTEDLY CLOUDS MY VISION OF HER. MORE ABOUT THAT LATER.

SHE ASKED ME ONCE WHAT I WRITE IN THIS NOTEBOOK. I TOLD HER THAT THE COLONEL KEEPS SAYING WE HERE IN NATO ARE ON THE FIRING LINE OF CIVILIZATION. IT IS IMPORTANT FOR FUTURE GENERATIONS, I TOLD HER, TO KNOW WHAT IT WAS LIKE TO BE ON THE FIRING LINE OF CIVILIZATION IN BRUSSELS IN THE SECOND HALF OF THE TWENTIETH CENTURY. MAYBE SOME DUSTY, IRRADIATED SCHOLAR WILL DIG AROUND IN THE RUINS OF THE CITY AND COME UPON THIS NOTEBOOK, CHARRED A LITTLE AROUND THE EDGES AND PERHAPS STIFF WITH THE RUSTY STAINS OF MY BLOOD, AND BE GRATEFUL TO WM. ABBOTT, JUNIOR, FOR HIS FORETHOUGHT IN JOTTING DOWN HIS OBSERVATIONS OF HOW THE SIMPLE AMERICAN SOLDIER LIVED WHILE DEFENDING CIVILIZATION ON THE EDGE OF EUROPE. WHAT THE PRICE OF OYSTERS WAS, THE SHAPE AND DIMENSIONS OF HIS BELOVED’S BREASTS, HIS SIMPLE PLEASURES, LIKE FUCKING AND STEALING GASOLINE FROM THE ARMY, THINGS LIKE THAT.

MONIKA SAID, DID I ALWAYS HAVE TO BE FRIVOLOUS? AND I SAID, WHAT ELSE IS THERE TO BE?

DON’T YOU BELIEVE IN ANYTHING? SHE ASKED ME.

I BELIEVE IN NOT BUCKING THE TIDE, I TOLD HER. IF THERE’S A PARADE GOING DOWN THE STREET I FALL IN LINE AND KEEP STEP, WAVING TO THE POPULACE, FRIEND AND FOE ALIKE.

GO BACK TO YOUR SCRIBBLING, SHE SAID. WRITE DOWN THAT YOU’RE NOT A TRUE REPRESENTATIVE OF YOUR GENERATION.

SCRIBBLING PERHAPS IS THE WORD FOR WHAT I’M DOING. I COME FROM A LITERARY FAMILY. BOTH MY MOTHER AND FATHER ARE—OR WERE—WRITERS. OF A SORT. MY FATHER WAS A PUBLIC RELATIONS MAN, A MEMBER OF A PROFESSION NOT HELD IN PARTICULARLY HIGH ESTEEM IN THE HALLS OF ACADEME OR IN PUBLISHERS’ OFFICES. STILL, WHATEVER THE MERITS OR FAILURES THAT CAN BE PUT TO HIS ACCOUNT, HE ACHIEVED THEM AT A TYPEWRITER. HE LIVES IN CHICAGO NOW AND WRITES ME OFTEN, ESPECIALLY WHEN HE IS DRUNK. I REPLY DUTIFULLY. WE ARE GREAT FRIENDS WHEN WE ARE FOUR THOUSAND MILES APART.

MY MOTHER USED TO WRITE CRITICISM FOR NASTY LITTLE MAGAZINES. OUR COMMUNICATIONS ARE MINIMAL. SHE DOES SOMETHING FOR THE MOVIES NOW. I GREW UP TO THE MUSIC OF TYPEWRITERS AND IT SEEMS NORMAL FOR ME TO PUT MY THOUGHTS, SUCH AS THEY ARE, ON PAPER. THE AMUSEMENTS ARE LIMITED HERE, ALTHOUGH IT’S BETTER THAN NAM, AS THE COLONEL KEEPS SAYING.

I PLAY TENNIS WITH THE COLONEL AND PRAISE HIS FEEBLE BACKHAND, WHICH IS ONE WAY OF GETTING AHEAD IN THE ARMY.

IF THE PREEMPTIVE RUSSIAN STRIKE DOESN’T HIT NATO, AS THE COLONEL WARNS IT WILL, I’LL KEEP SCRIBBLING. IT GIVES ME SOMETHING TO DO WHEN THINGS GET SLOW AT THE MOTOR POOL, WHERE I AM CALLED THE TRUCKMASTER.

I WONDER WHAT THE GUY IN CHARGE OF THE MOTOR POOL AT THE HEADQUARTERS OF THE WARSAW PACT FORCES IS DOING TONIGHT AS I WRITE THIS.

Alexander Hubbell was a newspaperman. Or at least he worked for
Time
Magazine in Paris. He was not supposed to be a newspaperman this week because he was on holiday with his wife. His wife was taking a siesta in the hotel at the base of the cape and Alexander Hubbell was approaching the
préfecture
of police in Antibes. He had been puzzling over a name that he had read in
Nice-Matin
three days ago, Jordache. An American named Jordache had been murdered in the port of Antibes just five days after his wedding. The murderer or murderers were being sought. For the time being no motive for the crime had been found. The victim who had been the owner of a yacht called the
Clothilde,
berthed in the harbor of Antibes, had been clubbed to death on the deck of his own ship.

Hubbell prided himself on his newspaperman’s memory and it had annoyed him that a name he felt he should have recognized and classified played only at the edges of his consciousness. He was relieved when he remembered. When he was still working in New York, there had been an issue of
Life
Magazine with the photographs of ten promising young politicians throughout the United States and one of the pictures had been of somebody called Jordache, he couldn’t recall the Christian name, who was the mayor of a small town about a hundred miles from New York City called Whitby. Then he remembered more. After the piece in
Life
there had been a scandal at the college in Whitby when rioting students had demonstrated in front of the mayor’s home and the mayor’s wife had appeared at the doorway drunk and naked. Somebody had taken a photograph and the print had gone around the office.

Still, a man whose wife had exposed herself bare-assed in front of a howling mob of students might well have gotten rid of her and married somebody with less flamboyant habits.

Of course, it might be somebody entirely different with the same name, Hubbell thought, as he waited for a light to change. A yacht in Antibes was a long way from Whitby, New York. Anyway, it was worth looking into. If it turned out to be the same promising young politician it would make a useful little story, vacation or no vacation. He had been on holiday five days already and was beginning to get bored.

The single policeman in the paint-flaked empty anteroom was dozing behind his desk, but brightened, glad for company, when Hubbell told him, in his good French, that he was a newspaperman and that he had come to make inquiries about the murder. The policeman went into another room and came out a moment later to tell him that the
chef
could see him now. Crime, it seemed, was not rife in Antibes that afternoon.

The
chef
was a sleepy-eyed, small, dark man in a blue T-shirt and rumpled cotton pants. A gold front tooth gleamed when he spoke: “What can I do for you,
monsieur?”

Hubbell explained that the details of the murder of an American in France, especially if this was the Jordache he thought it was, a man of considerable importance back home, would be of interest to the American public. He and his editors would be most grateful to the
chef
for any light he could shed on the affair.

The
chef
was used to French newspapermen, who had treated the murder as a routine settling of waterfront accounts. This shrewd-looking American, representative of a prestigious magazine, investigating the death of a fellow countryman in a holiday resort that attracted many Americans, was a different matter. The
chef
would have been happier if the arrest had already been made and the culprit behind bars, but there was no help for that at the moment.

“Are there any clues,” the man was saying, “as to who might have done it or what the motives were?”

“We are working on the case with diligence,” the
chef
said. “Twenty-four hours a day.”

“Do you have any leads?”

The
chef
hesitated for a moment. In the movies reporters were always finding clues the police overlooked. The American seemed like an intelligent man and there was the possibility that he might come up with something useful. “On the night of his wedding,” the
chef
said,
“Monsieur
Jordache was involved in an argument—a brutal argument, I have been told by his sister-in-law—in a bar in Cannes called La Porte Rose—with a man who is known to the police. A foreigner. Yugoslav. By name Danovic. We have interrogated him. He has a perfect alibi, but we would like to question him again. Unfortunately, he seems to have disappeared. We are at the moment looking for him.”

“A brutal argument,” Hubbell said. “You mean a fight.”

The
chef
nodded. “Of extreme brutality, I have been told by the sister-in-law.”

“Do you know what it was about?”

“The sister-in-law claims that the foreigner was about to commit rape on her when
Monsieur
Jordache intervened.”

“I see,” Hubbell said. “Was Jordache in the habit of getting into fights in bars?”

Tom Clancy Under Fire by Grant Blackwood
A Fish in the Water: A Memoir by Mario Vargas Llosa
The Light in Her Eyes by Shane, A R
Mercy Thompson 8: Night Broken by Patricia Briggs
The Bookstore Clerk by Mykola Dementiuk
Becoming by Chris Ord
Fairest of All (Whatever After #1) by Sarah Mlynowski
The Fragile Hour by Rosalind Laker
Broken Skin by Stuart MacBride
Dangerous: A Seaside Cove Romance by Cora Davies