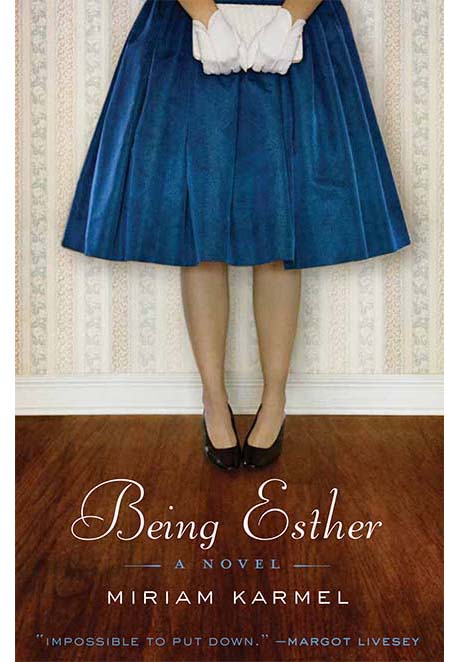 All rights reserved. Except for brief quotations in critical articles or reviews, no part of this book may be reproduced in any manner without prior written permission from the publisher: Milkweed Editions, 1011 Washington Avenue South, Suite 300, Minneapolis, Minnesota 55415.

Milkweed Editions is committed to ecological stewardship.
We strive to align our book production practices with this principle, and to reduce the impact of our operations in the environment. We are a member of the Green Press Initiative, a nonprofit coalition of publishers, manufacturers, and authors working to protect the world's endangered forests and conserve natural resources.
Being Esther
was printed on acid-free 100% postconsumer-waste paper by Friesens Corporation.

To Bill
and for Shirley

They named her Esther.

As a child, Esther believed she was named for the Persian queen who risked her life saving her people from a wicked man. Every year, on the holiday commemorating that miraculous rescue, children in costume flock to synagogues to hear the story of Esther. They rattle noisemakers whenever the wicked one's name is uttered; they hiss and boo. Esther had loved parading around her shul in a long dress, lipstick, and a tinfoil crown, pretending to be the fearless, noble queen.

When she was older, Esther enjoyed telling people that she'd been named for Esther Williams, which, given her age, was impossible.

The fact that Esther was named for neither the famous swimming beauty nor the savior of her people was of no concern to Esther's mother, who simply shrugged and said, “I don't remember” whenever Esther asked the origin of her name. If Esther were to plead with her mother to remember, Mrs. Glass would merely say, “Oy, please. Can't you see I'm busy?” Then she would instruct Esther, in Yiddish, to go play in the street or go hit her head against a wall.

One day, worn down by Esther's nagging, Mrs. Glass finally allowed that Esther had been named after Esther Jo Berman, the daughter of Mrs. Glass's best friend, Lottie. Not that she was named
for
Esther Jo. But when Esther was born, a better name
had not presented itself. “It seemed like a good idea at the time,” her mother said.

The truth came as a disappointment. Still, Esther was grateful that her parents hadn't given her the middle name of Jo. She could almost hear her father say, “What kind of name is Jo for a Jewish girl?”

And so she was Esther, with no middle name.

Recently, Esther has begun to wonder whether her life might have turned out differently had her name been deliberately chosen. Not that anything untoward had befallen her. She'd raised two healthy children; traveled some. Sometimes she wishes she had done more, had a career, like her daughter and granddaughter. Yet she's wanted for nothing. It even embarrasses her to think that people might envy the ease with which she has sailed through life.

Still, she can't shake the feeling that if only her parents had named her with intention, she might have grown into her name, as if it were an inheritance that mustn't be squandered. Instead, Esther has gone through life with a borrowed name, like some off-the-rack garment or counterfeit designer handbag, a name like the fake Seiko watch she purchased on a trip to Mexico with her daughter, Ceely, whose name had been deliberately chosen.

F
ive people. The Markels, should they answer, will make six and seven.

Esther has been working her way through the alphabet, phoning the numbers in the tooled-leather address book her mother once brought back from a temple tour to Israel, one she'd picked up in the souk and gave to Esther for her twenty-ninth birthday. It took Esther a year before she dared to write on the creamy vellum, making the first entries with the silver fountain pen her mother-in-law had given her as an engagement present. Soon enough, she was using anything at handâpencils, ballpoints, felt-tip pens that bled through to the other side.

Now the pages are riddled with slashes. In fifty-five years people moveâlike the Markels, who left Chicago for Phoenix after Buddy retired. Her sister Anna moved so often Esther had to start a second page, though she still hasn't drawn a line through Anna's last entry, the place on Fourteenth Street in Santa Monica.

Esther makes her calls from the kitchen table, where she can gaze out the window at the changing sky or at the pedestrians passing by. In the other direction she can see, across the divider into the living room, the few familiar furnishings she and Marty had moved from the house on Shady Hill Roadâthe mahogany breakfront, one of the matching love seats they'd bought on sale at Marshall Field's, the red leather easy chair, a couple of paintings.
The gilt-framed mirror that used to grace their old foyer is now wedged onto a patch of wall between the two small rooms.

They'd moved the old rotary phone, too. Esther prefers it to the infantilizing portable phone with the oversized buttons that Ceely gave her for Mother's Day. She misplaces it. And she finds it disconcerting that she can be anywhereâeven the bathroomâwhile speaking to some unsuspecting person on the other end. Besides, she enjoys the mild exertion of rotating a dial, the steadying effect it has on her trembling hand.

The Markels' phone is ringing. Esther resists the urge to hang up, telling herself the odds are in her favor; this time somebody will answer. Twice already, as she has worked her way through the book, answering machines have informed Esther that the number she dialed was, in fact, the number she dialed. The first time she got a machine she panicked and hung up. The second time, she was prepared. “Hi! This is Esther Lustig. Remember me? I was just calling . . .”

Then Marty interrupts. Even in death his gravelly voice intrudes. Essie, Essie. After all these years, a person doesn't call just like that. Out of the blue. Use your head.

Setting the receiver down, she looks across the table, as if her husband were sitting there working the crossword puzzle or finishing his second cup of coffee. “And why not out of the blue?” she demands.

Marty is forever looking over her shoulder, monitoring her every move, offering unsolicited advice. After he died, after she left him at Waldheim on that bitter afternoon wrapped in his flimsy prayer shawl, left him with the gravediggers who were off to the side, not so patiently revving their backhoes as the last mourners tossed dirt on his coffin, after all that, she had expected that finally she'd get some peace and quiet. Not that she doesn't miss him. Marty's absence is palpable.

Now she consoles herself that friends lose touch, not intentionally, but because eleven years ago you made a mental note to give someone a call and then the days slipped by. Of course, that wouldn't satisfy Marty, who always had to analyze every little thing, examine it from this angle and that. If Esther lost her temper, burned a pot roast, forgot to pick up the dry cleaningâhe would draw a line clear back to her childhood.

Theirs To Claim (Predatory Desires Book 1) by McKinley, Diana
The Beginning—A Duet: Ryder & Two Worlds Colliding by Jani Kay
Anything But Mine by Justice, Barbara
A Fit of Tempera by Mary Daheim
Children of the Days by Eduardo Galeano
Californium by R. Dean Johnson
Hunting April by Danica St. Como
Arise (Awakened Fate Book 4) by Skye Malone
Park and Violet by Marian Tee
A Smudge of Gray by Jonathan Sturak