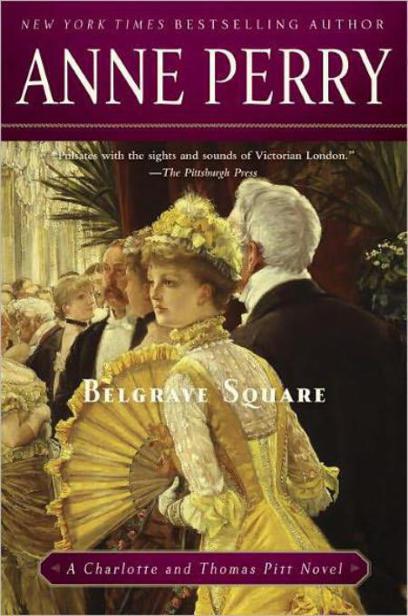 “Her grasp of Victorian character and conscience astonishes.”

“So pulsates with the sights and sounds of Victorian London that the reader soon gets caught up in Anne Perry’s picaresque story of life, love, and murder.”

“As always, [Perry] is adept at showing the reader two sides of Victorian London—the dark side where people are barely surviving and glittering society where people sometimes kill to hide terrible secrets.”

“A well-plotted puzzle… Perry’s compassionate characterizations demonstrate the extremes of Victorian society, from the chilling conditions of the poor cowering on doorsteps to the poise of the warm and well-dressed inside.”

By Anne Perry
Published by The Random House Publishing Group:

Featuring William Monk:
THE FACE OF A STRANGER
A DANGEROUS MOURNING
DEFEND AND BETRAY
A SUDDEN, FEARFUL DEATH
THE SINS OF THE WOLF
CAIN HIS BROTHER
WEIGHED IN THE BALANCE
THE SILENT CRY
A BREACH OF PROMISE
THE TWISTED ROOT
SLAVES OF OBSESSION
FUNERAL IN BLUE
DEATH OF A STRANGER
THE SHIFTING TIDE
DARK ASSASSIN

The World War I Novels:
NO GRAVES AS YET
SHOULDER THE SKY
ANGELS IN THE GLOOM
AT SOME DISPUTED BARRICADE
WE SHALL NOT SLEEP

Published in the United States by Fawcett Books, an imprint of The Random House Publishing Group, a division of Random House, Inc., New York, and simultaneously in Canada by Random House of Canada Limited, Toronto.

Fawcett is a registered trademark and the Fawcett colophon is a trademark of Random House, Inc.

To my friend, Cathy Ross

P
ITT STOOD
on the river steps, the water slurping from the wakes of the barges as they passed close in shore on their way up from the Pool of London. It was lunchtime. In one hand he had a little pot of jellied eels from the stall near Westminster Bridge, and in the other a thick slice of bread. The summer sun was bright and hot on his face and the air was salt and a little sharp. Behind and above him he could hear the carts and carriages clopping along the Embankment taking gentlemen to the City for business, or to their clubs for pleasure, and ladies to make their afternoon calls, swap visiting cards and gossip, and make arrangements for the endless social whirl of the season.

The terror and the outrage of the Whitechapel murders had died down, although the police were still viewed as a failure for not having caught the worst murderer in London’s history, whom the newspapers had called “Jack the Ripper.” Indeed the commissioner had resigned. The Queen mourned in Windsor, as she had done for the last twenty-eight years, or as some said sulked, but altogether the outlook was fair, and improving. Personally Pitt had never been happier. He had a wife he loved and whose companionship he enjoyed, and two children who were healthy, and it was a keen pleasure to watch them grow. He was good at his work and it provided him with sufficient money to have a comfortable
home, and even the occasional luxury, if he were careful between times.

“Inspector!” The voice was urgent and breathless and the feet loud on the steps. “Inspector Pitt—sir!” The constable lumbered down noisily, clattering his boots on the stairs. “Inspector Pitt, ah!” He stopped and gasped in satisfaction. “Mr. Drummond sent me ter find yer. ’E needs ter see yer, important like, as quick as yer can.”

Reluctantly Pitt turned around and looked at the hot and uncomfortable young man, pink-faced above his tunic with its bright buttons, his eyes filled with anxiety in case he should not have carried out his duty rapidly enough. Micah Drummond was the most senior man in Bow Street and unmistakably a gentleman, and Pitt was an inspector at last gathering some of the credit he deserved.

Pitt ate the last of the eels, stuffed the carton in his pocket and threw the crust of bread onto the water for the birds. Immediately a dozen appeared and swooped down for it, their wings flashing in the sun.

“Thank you, Constable,” he acknowledged. “Is he in his office?”

“Yes sir.” He seemed about to add something more, then changed his mind. “Yes sir,” he repeated, following Pitt up onto the Embankment.

“All right, you can go back to patrol,” Pitt directed him, and set out with a long stride towards Bow Street. It was close enough to be faster walking than looking for a cab free to pick up a fare at this unlikely spot, and on a day when the air was so mild and people were out driving for pleasure.

He strode into the station to the visible relief of the desk sergeant, and went straight up to Drummond’s office and knocked.

Pitt went in and closed the door behind him automatically. Drummond was standing by the window, as immaculately dressed as always, with the effortlessness of those born to good taste without ostentation, but his long, lean face was tense and anxiety was written in the angle of his body, and the tightness of his shoulders.

“Ah Pitt! Good.” He smiled with a flash of warmth, and then the concern replaced it instantly. “I’ve told Parfitt to
take over your fraud case, I’ve got something more important. It’s delicate—” He hesitated, seemed to consider something and then discard it, which was unlike him. Pitt had found him direct, without flattery or evasion, and always without that manipulation which marked so many lesser men. It was indicative of the degree of pressure he now felt that the right words should be so difficult for him to find.

Drummond came to the point. “Pitt, there is a case I want you to handle.” They had worked together with mutual respect, even friendship. He allowed that to guide his speech now. “A very important man has just called me, in the name of … friendship.” He hesitated only an instant over the word, but Pitt noticed it with surprise, and saw the faintest of color in his cheeks.

Drummond moved away from the window overlooking the street and stood behind the large, leather-topped desk.

“He has asked me to preempt the local police,” he went on, “and possibly the newspapers, by handling the investigation. You have more skill than anyone else in dealing with cases like this. In fact I have had it in mind to promote you to political cases from now on—and those that look like becoming political. I know you refused promotion before because you didn’t want to sit behind a desk …” He tailed off, looking at Pitt’s face.

Pitt would have helped him if he could, but he had no idea what the situation involved, or whom, or why it should cause Drummond to exhibit such an uncharacteristic loss of composure and obvious unease.

“I’ll tell you as we go.” Drummond shrugged and walked over, taking his hat from the stand, and opened the door. Pitt followed with a simple nod of assent.

In the street below it took only a moment to hail a hansom cab. As soon as Drummond had given the driver instructions and they were both seated he began his explanation, not looking at Pitt, but staring straight ahead of him, his hat balanced on his knees.

“Today I received a call on the telephone from Lord Sholto Byam, whom I know slightly. We have friends in common.” His voice was curiously on edge. “He was in some distress because he had just heard of the murder of a man of his
acquaintance, a most unsavory man.” He breathed in and out slowly, still without looking at Pitt. “And for reasons he will explain to us, he fears he himself may come under suspicion for the crime.”

Questions leaped to Pitt’s mind. How had Lord Byam heard of the murder? It could not yet be in the newspapers. How did he know a man of such a nature? And why should he be suspected? But more powerful than these was his awareness of Drummond’s acute discomfort, almost embarrassment. The conciseness of his account suggested a prepared speech, and he had gone straight through it without deviation or a glance at Pitt to see his response.

“Who is the victim, sir?” he said aloud.

“Where was he found?”

“In his home, in Cyrus Street, shot through the head.” Drummond winced as he said it. He hated guns and Pitt knew it.

“We’re going west,” Pitt pointed out. Clerkenwell was to the east.

“We’re going to see Lord Byam,” Drummond answered. “In Belgravia. I want you to know all you can about it before you go to Clerkenwell. It will be hard enough to take over another man’s investigation without going in ignorant of what you face or why you are there.”