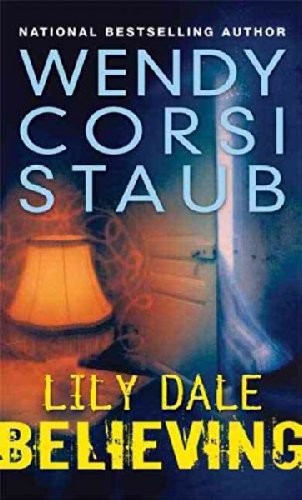 And to Brody, Morgan, and Mark

The author is grateful to agents Laura Blake Peterson and Holly Frederick, as well as to Tracy Marchini, all at Curtis Brown, Ltd.; to Nancy Berland, Elizabeth Middaugh, and staff at Nancy Berland Public Relations; to Rick and Patty Donovan and Phil Pelleter at the Book Nook in Dunkirk, New York; to Emily Easton, Deb Shapiro, and everyone at Walker & Company; to Jean Doumanian, Patrick Daly, and Kim Jose at Jean Doumanian Productions; to Susan Glasier of the Lily Dale Assembly offices; to the Reverend Donna Riegel and members of her beginning mediumship class in Lily Dale; to Mark and Morgan Staub for their literary expertise and creative feedback; and to Brody Staub, just because he’s Brody.

She realizes, the moment she reaches the dark street and pats the back pocket of her jeans, that she doesn’t have her cell phone.

What’s she supposed to do now? Go back and look for it?

She turns and looks back at the house. Towering, with turrets, the three-story brick mansion might once have been beautiful. Now occupied by students at nearby Gannon University, the old home’s doors and windows gape wide open, spilling stray people and loud music into the crisp September night. With a new semester just under way—and a party in full swing—there are cars on the lawn and bikes on the porch.

No way am I going back in there.

Not after someone figured out she’s just a high school student and informed the hosts, who quickly—and loudly— kicked her out.

Why am I even here?

She usually doesn’t go sneaking around behind her parents’ backs, crashing college parties, but her friend Maria— who’s still somewhere inside, flirting with some guy—talked her into it.

Now she’s going to wonder where I am.

Well, too bad. She’s not about to go back in to look for Maria.
Or
the phone, which she probably didn’t even have with her in the first place. Or even her jacket, which she definitely
did
have with her and left draped over a chair inside.

Summer’s definitely over,
she thinks, wishing she had the jacket now. Shivering in her skimpy pink ribbed tank top, she checks her silver bracelet watch.

It’s almost midnight. The original plan was for her to call her dad to come pick her and Maria up at the pizza-and-wings place around the corner, which is where they’re supposedly hanging out after a movie on this last summer night before they start their senior year.

Her parents are going to kill her if she misses her curfew. They’ve been really touchy lately. They totally freaked last week when she bleached her reddish hair blond, right before she had her picture taken with the cheerleading squad for the back-to-school issue of the local paper.

You’d think she had pierced her tongue or gotten a tattoo or something, the way Mom and Dad carried on. If they ever find out she was at a college party . . .

Heading away from the lit-up party house, down the dark, deserted, unfamiliar street, she tries not to think about any of the horror movies she’s seen. Naturally, they are all she can think about. Every tree, every parked car, seems to conceal a lurking ax murderer or fiery-eyed demon.

Stop it.You are
such
a loser.

She turns a corner, and then another. The night is deadly still. Her pink rubber flip-flops make a hollow slapping sound on the concrete sidewalk.

Something else reaches her ears, then: an approaching car. She hears it coming before she sees the headlights swing onto the block.

It seems to slow down as it comes closer, catching her in its bright spotlight with nowhere to hide. Already jittery, she now feels borderline frantic. She walks faster, heart racing.

The car is creeping now, coming up right alongside her. She hears the whir of an electric window being lowered, and a perfectly ordinary-sounding masculine voice calls, “Excuse me, miss? You shouldn’t be out here alone right now. Miss?”

Holding her breath, she turns reluctantly toward the car. A man is behind the wheel.

Her mother always said never talk to strangers, but what is she supposed to do? Ignore him? Anyway, she’s a safe distance away. It’s not like he can pull her into the car from there. She can always run and scream bloody murder if he tries.

She can’t make out his features in the dark, but she sees him reaching into his pocket. Her stomach lurches. Is he going to pull out a gun and force her into the car?

She’s about to take off when she sees something glint— and realizes it’s not a gun at all.

“We had an attempted rape over on French Street. The perp took off running in this direction. You haven’t seen him, have you? Tall guy, over six feet, with dark hair, about two-ten, two-twenty pounds, wearing a dark jacket and cap.”

“No. I haven’t seen him.” She looks around fearfully, half expecting the hulking suspect to jump out from behind the nearest shrub and attack.

“Okay, thanks.” The detective starts to roll up the window. “Just be careful, okay?” he calls, then adds, “You don’t have far to go, do you?”

“I . . . uh, I was going to walk home, but it’s up off of East Twelfth.” And actual escaped rapists are way scarier than imaginary ax murderers and fiery-eyed demons. “Do you have a phone I can borrow to call my parents for a ride?”

“I do, but what are you going to do after you call? Wait around alone out here for them to come and get you? You’ll be a sitting duck.” He leans over and opens the passenger’s-side door with a sigh. “Get in. I’ll take you home.”

He doesn’t sound thrilled about it, but she hurries gratefully toward the car.

She settles into the seat. The car is warm. Good. That feels much better. If he hadn’t come along, who knows what might have happened to her alone out here?

The detective rolls up the window and locks her door from the control on the driver’s side.

“What’s your name?” he asks as the car picks up speed.

Phil? That’s odd. Shouldn’t he be calling himself Detective Something?

He comes to a light and stops the car. When it changes, he turns the corner.

Oops. “Um . . . Detective?” She can’t bring herself to call him by his first name. “East Twelfth is that way.”

He says nothing, just keeps driving as if she hadn’t spoken. Maybe he didn’t hear her.

“Excuse me? I live back that way,” she repeats, and an uneasy feeling begins to creep over her again.

Still, he ignores her. He goes around another corner, again heading in the wrong direction, taking the turn so fast the tires screech.

“You know what? I need to get out,” she blurts, stark fear transforming her voice into a little girl’s, high pitched and vulnerable. “Please. Let me out.”

She realizes that a faint smile is playing at the corners of his mouth. No. Not a smile at all.

He lied, she realizes in a burst of sheer panic. He isn’t a detective at all.

And the danger wasn’t out there on the street . . . it’s right here in the car with him.

And I should have listened to Mom. Never talk to strangers.

Terrified, she begins to pray.

With a trembling hand, eyes still blinking in the sudden glare from the overhead bulb, Calla Delaney turns on the tap at the pedestal sink in the upstairs bathroom. A deafening groan of Victorian-era plumbing sends a rush of water that seems to roar through the old cottage.

Oops—too loud. Calla hurriedly turns it off, not wanting to wake her grandmother. Standing absolutely still, breath caught in her throat, she listens for stirring down the hall.

Right. Odelia Lauder really does—as she likes to say— sleep like the dead.

Talks to them, too,
Calla thinks with a glimmer of irony despite the lingering dread still wrapped around her like a clammy towel.

Her grandmother is a medium—and she’s not the only one.

Here in Lily Dale, Victorian cottages with hand-painted signs announcing psychic mediums in residence are as common as glittering neon casinos on the Las Vegas Strip.

Calla had no idea what she was walking into when she first flew to western New York State from Tampa a few weeks ago to visit the grandmother she hadn’t seen in over a decade.

Who ever heard of a town dedicating itself to spiritualism for well over a century?

Okay, plenty of people have
heard
of it. That’s obvious from the crowds of grieving visitors who wander up and down the streets every day, hoping to connect with their dearly departed.

But Calla was clueless about Lily Dale’s genuine ghost-town status at first. And when she found out, she decided Odelia, and Lily Dale and everyone in it, was . . . well, some kind of freak.

Seriously, who in their right mind would actually choose to
live
in a place like this?

Calla’s mom hadn’t. The moment she was eighteen, Stephanie Lauder Delaney left Lily Dale and never looked back. Nor did she ever tell Calla about her hometown’s eerie little secret.

A chill breeze off nearby Cassadaga Lake isn’t all that crept over Calla as the overcast days of August wound to a close last week.

Yeah, things have changed pretty drastically since she got here. She now finds herself not only believing in Odelia and the others—and in ghosts—but regularly seeing and hearing them herself.

In other words, Calla seems to be, like her grandmother, spiritually gifted.

It sure has taken her long enough to suspect that Aiyana, the exotic-looking woman with the dark hair; Kaitlyn, the troubled, pretty teenaged girl; and the other strangers who pop in and out of her world these days might actually be . . . um . . .
dead.

I got this from her, too.

Slowly, she looks down and unclenches her left fist.

Lying in her palm, bathed in the yellow glow from the antique fixture above the sink, is the emerald bracelet Mom gave Calla when her boyfriend, Kevin, dumped her back in April.

“It’s yours to keep,” Mom said, hugging her. “I know it’s just jewelry. It won’t heal a broken heart, but it might make you feel better.”

Until the clasp suddenly broke as Calla leaned over her mother’s open grave in July. The bracelet fell from her wrist and was swallowed into the gaping hole where Stephanie’s coffin had just been lowered.

Helpless, Calla knew it was lost to her forever—just as Mom was.

To her utter shock, she was dead wrong.

About the bracelet, anyway.

A few minutes ago, at precisely 3:17 a.m., in her mother’s old bedroom across the hall, she experienced the impossible.