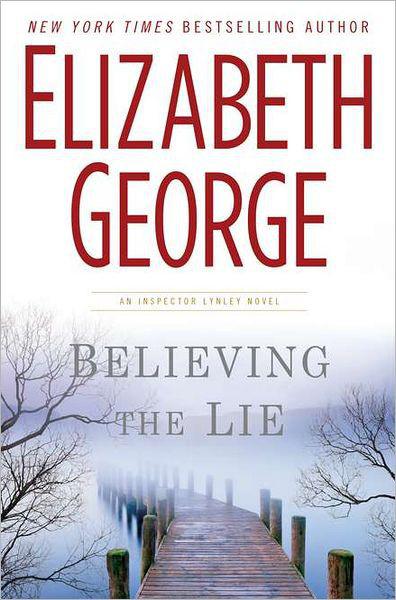 PRAISE FOR
BELIEVING THE LIE

“A multiplicity of subplots and a richness of physical detail…. The story strands are untied and retied in satisfying and often moving ways.”

“Elizabeth George is a superstar of the crime-fiction world…. Deservedly so: Her tales always provide nuanced character studies and insights into social issues along with their intricate mysteries.”

“A dense, twisty plot with characters who reveal the sad spectrum of human dereliction.”

“George’s…ability to continually enhance…the novel is nothing less than superlative, and her atmospheric prose, complete with lovely and detailed descriptions of her setting, combines to add literary gravitas to her work…a worthy addition to her portfolio and one that simultaneously disturbs and satisfies.”

“Impossible to put down…for the Elizabeth George fan—or any fan of the well-written, intelligent, character-driven novel—I’d say, dig in.”

“When [the story] reaches its climax, look out. [
Believing the Lie
is] bliss for mystery lovers, capped off with a surprise ending.”

“A rich, multilayered tale of the effects of secrets and lies on various characters…. George is masterful in handling a large cast and disparate story lines. Grade: A-.”

“Elizabeth George has outdone herself…. [
Believing the Lie
is] awash in scandal, secrets, and sexual indiscretions.”

“Some of my favorite series characters…another weighty, complex psychological mystery.”

“A good old-fashioned country-home mystery…. George stands shoulder to shoulder with P. D. James and Ruth Rendell as a grande dame of the British mystery.”

“Elizabeth George’s novels aren’t just crime novels—they are psychological, character-driven stories reminiscent of P. D. James’s novels…. This is one of her best.”

“A book of twists, turns, and, to be blunt, fantastic writing…. As always with Ms. George, the reader has no idea what will happen on the next page, and just when you believe you have it all figured out, a new character or story line is uncovered that throws you back to the beginning. The plotlines are abundant and only Inspector Lynley’s prowess and his very smart friends will uncover the truth under this family’s web of lies. A complete A+ for the mystery realm.”

“George’s mastery of impeccable pacing and plot development mercilessly launches you into the latest episode (in this case number seventeen) in D.I. Lynley’s life…. She breathes pure Anglican fire and dialogue, not to mention geographic authenticity, into her award-winning novels.”

“George’s many fans…will be thrilled with this new episode in the lives of her lovable cast of characters.”

“So fascinating…thundering…I wished for at least ten more.”

“George’s strengths—character development, plot twists, and shocking tragedy—continue to shine…. Look for a serious cliff-hanger at the end, which will leave George’s fans panting for the next Lynley episode.”

“Unsettling and will keep readers on edge.”

“[Lynley is] one of the great character portraits in contemporary crime fiction.”

“Ms. George can do it all, with style to spare.”

—
The Wall Street Journal
on
Careless in Red

—
Chicago Tribune
on
A Traitor to Memory

“Crime writing at its best.”

—
The Courier-Mail
(Queensland, Australia) on
This Body of Death

For the Sake of Elena

Playing for the Ashes

In the Presence of the Enemy

Deception on His Mind

In Pursuit of the Proper Sinner

A Traitor to Memory

A Place of Hiding

With No One as Witness

What Came Before He Shot Her

This Body of Death

Write Away: One Novelist’s Approach
to Fiction and the Writing Life

A Moment on the Edge:
100 Years of Crime Stories by Women

Two of the Deadliest

THE LIBRARY OF CONGRESS HAS CATALOGED THE HARDCOVER EDITION OF THIS TITLE AS FOLLOWS:

The publisher does not have any control over and does not assume any responsibility for author or third-party Web sites or their content..

always Antonio to me

This life’s five windows of the soul

Distorts the Heavens from pole to pole,

And leads you to believe a lie

FLEET STREET
THE CITY OF LONDON

Z
ed Benjamin had never been called into the office of the editor before, and he found the experience simultaneously disconcerting and thrilling. The disconcerting half of it resulted in massive sweating of the armpits. The thrilling half of it produced a heartbeat he could actually feel, for some reason, in the pads of his thumbs. But since from the first he’d believed it essential to see Rodney Aronson as just another bloke at
The Source
, he attributed both the sweating of armpits and the pulsing of thumbs to the fact that he’d switched from his one summer suit to his one winter suit rather too early in the season. He made a mental note to change back to the summer suit in the morning and he only hoped his mother hadn’t taken it out to be cleaned once she saw he’d made the switch. That would be, Zed thought, exactly like her. His mum was helpful and earnest. She was too much of both.