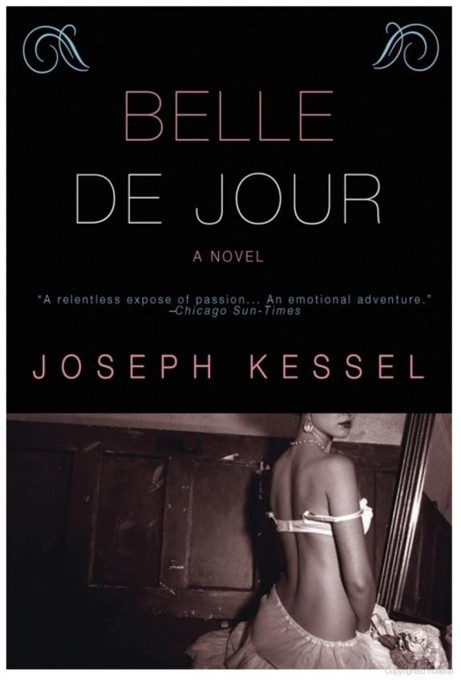 Many, perhaps most, fans of Luis Buñuel have no idea that his consummately stylish and enigmatic
Belle de Jour
(1967)—the portrait of a society woman slumming in a brothel—was adapted from a controversial novel by Joseph Kessel, a Russian Jew born in Argentina who wrote in French, that was first published in 1928. Kessel has himself suffered the fate (near-oblivion outside France) of the book that he called the “dearest” of his creations, and the one “in which I think I’ve best caught the accent of life.” But he was among the most widely read French authors of his time, a famously prolific and charismatic storyteller, biographer, travel-writer, reporter, editor, aviator, Resistance fighter, member of the Academie Francaise, and—more to the point, perhaps—a reckless and virile hedonist. “I knew the risk I ran,” Kessel writes in his preface to
Belle de Jour
—the risk of outrage at the novel’s blasphemous (and, if one is honest, enduringly titillating) premise: that Séverine, a frigid beauty otherwise blissfully married to a handsome surgeon would court debasement in search of ecstasy by freelancing as a whore.

There is not an obscene word or a graphic sex scene in Kessel’s novel, but its subject almost guaranteed that there would be no American edition for decades, and the first English translation of
Belle de Jour
wasn’t published until 1962. If it scandalized Jazz Age Parisians, what hope did it have of seeing the light in a country that would not only close its borders to
Ulysses, Tropic of Cancer
, and
Lady Chatterley’s Lover,
but that would—in 1930—stop Voltaire’s
Candide
at customs, en route to the Harvard library? Buñuel and his screenwriter, Jean Claude Carriere, had the advantage of a liberal, even revolutionary, climate and they attribute fantasies to Séverine that Kessel (who treats her with a gallantry that Bunuel found sentimental) leaves to the imagination. “Séverine’s daydreams are Buñuel’s contribution to the plot-line,” Michael Wood writes in his monograph on
Belle de Jour.
“Indeed, Bunuel said that the idea of the two levels of reality, where in Kessel there was only one, was what provoked him to film the story in the first place … This was a way of distancing himself from his real debt, perhaps, since the novel already contains a good deal of what he turned out to need. It is shrewd and intelligent throughout, warmly sympathetic to its troubled heroine, only a touch too dedicated, in the end, to the idea of sexuality as a horrible fate.”

If the sadomasochism of Buñuel’s faintly parodic dream sequences is explicit, their meaning isn’t. (And what the devil does Séverine’s brutish Chinese client have in that ominously humming box? According to Wood, the question drove Bunuel crazy—it was all people asked him, he said—and his standard answer was: “How should I know?”) Fifty years earlier, however, Kessel felt obliged both to explain himself and to defend Séverine’s “sick heart.” He did so to counter the charges of “pointless licentiousness, even of pornography” that greeted
Belle de Jour
when it was serialized in
Gringoire.
1
Unlike the old Buñuel, who revels with a certain cool, ironic glee in the perversity of bourgeois society, not to say of human nature, the young Kessel (they were born two years apart, the former in 1900, the latter in 1898) was a romantic. His goal, he writes, was to dramatize a common, if tragic, marital predicament: the divorce between “a body and soul,” and between “a true, tender, and immense love, and the implacable demands of the senses.” In that respect, his friend Colette took a page, and perhaps more than one, from
Belle de Jour
when she wrote
The Pure and The Impure
(first published as
Ces Plaisirs
… in 1931).
2
“But what is the heart, madame,” asks Charlotte, an orgiast with ladylike manners, when Colette meets her in an opium den. “It’s worth less than people think. It’s quite accommodating, it accepts anything. You give it whatever you have, it’s not very particular. But the body … Ha! That’s something else again.”

Though Kessel was a rebel and bohemian, he was, like many heretics, a product of the religion he was trying to overthrow, and what he calls a divorce between “body and soul” is, in fact, a split that exists in most civilized people—between a social and a sexual self. Literature, to a large degree, is a chronicle of the lengths that tormented men and women go to in their effort to escape, punish, rationalize, or resolve that conflict. (And it’s worth noting that in his private life, Kessel was more successful than most. He managed to content a harem of mistresses who all, apparently, coexisted in relative peace and adored him.)

Séverine and Pierre may have an idyllic marriage—a union, in other words, with a high index of compatibility—but sex thrives on the thrill of otherness. The social self seeks a consort, the sexual self an accomplice—and how often do they coincide in the same partner? French fiction has always been obsessed with that conundrum, and readers of the late 1920s were fairly blasé about dangerous liaisons and dramas of adultery, even when the heroine’s other “man” was a woman. So what nerve did Kessel shock, and Buñuel after him, in
Belle de Jour
, and why is it still raw?

To discover the answer, read the book, though before you do, a word of caution. Art and pornography may both draw the curtains on a stirring, troubling, and forbidden scene, but in a work of art, there’s no voyeurism with impunity.

1
Gringoire
, which published the Belle de Jour serial in 1927, was a journal of culture and politics with a mass circulation, some six hundred and fifty-thousand readers. It was funded by a rich Corsican, Horace de Carbuccia, and Kessel, one of its co-founders and the literary editor, recruited a distinguished roster of contributors. By the mid-thirties, however, Carbuccia had become an apologist for Hitler, and Kessel departed. (He later fled France to serve as de Gaulle’s aide-de-camp in London).
Gringoire’s
readers apparently made no objection to the obscenity of rabidly antisemitic caricatures and pro-Nazi propaganda, but obscenity, of course, is subject to “community standards.” Nouvelle Revue Francais, an irreproachable French company, publlished
Belle de Jour
in book form a year later.

2
Kessel bought it for serialization in
Gringoire
, though after three installments, Carbuccia abruptly suspended publication, without notifying Colette. He simply cut off the text in mid-sentence with the word
“Fin.”

I don’t much like prefaces that explain books and I’d especially dislike seeming to use one to make excuses for myself. None of my books is dearer to me than this one, in which I think I’ve best caught the accent of life. Yet it seems such language may be wasted, for I’m well aware that there is a misunderstanding about the book, which I’d very much like to clear up.

When
Belle de Jour
was first serialized in
Gringoire
the readers of that journal reacted with a certain liveliness. Some accused me of pointless licentiousness, even of pornography. To them there is no reply possible. If my book failed to convince, then so much the worse for them or me, I don’t know which; in any case there’s nothing I can do about it. To me, it seems impossible to lay bare the drama of spirit and flesh without speaking frankly of both. I don’t believe I’ve gone beyond the limits permitted a writer who has never used lust as bait for his readers.

From the moment I chose to write on this subject I knew the risks I ran. But when the novel was finished, I couldn’t believe anyone might mistake my intentions; otherwise,
Belle de Jour
would never have appeared.

One must despise false modesty as one scorns poor taste: prudish complaints don’t bother me, intellectual attacks do. It was to disarm them that I decided to do something I hadn’t thought of before, namely, write a preface.

“What an exceptional case!” people commented, and several doctors wrote me that they’d run across Séverines in their practice. It became clear that according to such people
Belle de Jour
was a successful piece of pathological observation. Now that is precisely what I didn’t mean to convey. Painting the portrait of an ogress wouldn’t interest me, even if I could do it perfectly. What I tried to do in
Belle de Jour
was show the desperate divorce that can exist between body and soul; between a true, tender, immense love and the implacable demands of the senses. With a few rare exceptions, every man and woman who has loved over a period of time has been burdened by his conflict. It is recognized or not, it tears one apart or it sleeps; but it’s there. A banal conflict described how often! I think, though, that the existence of an extraordinary situation can force this conflict to such a degree of intensity as to allow the instincts to be shown in the fullness of their eternal greatness. Thus, I constructed my story deliberately, not for any meretricious appeal, but as the sole means of touching surely and sharply the depths of every human soul hiding this latent tragedy. I chose my subject as one examines a sick heart: in order better to know how a healthy one functions; or as one studies mental illness, in order to understand how the mind operates.

The subject of
Belle de Jour
is not Séverine’s sensual aberration; it is her love for Pierre independent of that aberration, and it is the tragedy of that love.

Shall I be the only one to pity Séverine, and to love her?

To reach her mother’s room from her own, Séverine who was eight had to go down a long hallway. She disliked the trip, and invariably ran all the way. But one morning Séverine was brought up short halfway down the corridor. A door leading to the bathroom had just opened. A plumber appeared: short, squat. From under sparse reddish lashes his eyes contemplated the girl. Bold as she was, Séverine was scared, took a step back.

Her movement decided him. He glanced around sharply and grabbed Séverine with both hands. An odor of gas, of animal strength closed against her. Two ill-shaven lips burned her neck. She fought back.

The workman laughed silently, sensually. Under her frock his hands slipped over the soft flesh. Suddenly Séverine stopped struggling. She was stiff, white. The man put her on the floor and left noiselessly.

Séverine’s governess found her lying in the hallway. She thought the girl had slipped. So did Séverine.

Portrait Of A Lover by Julianne Maclean
A Month of Summer by Lisa Wingate
The Right Side of Wrong by Reavis Wortham
Carola Dunn by The Fortune-Hunters
Venus by Jane Feather
The Good Sister by Drusilla Campbell
The Compleat Bolo by Keith Laumer
Rock Star Rebel (Rising Rock Star) by Emily Kee
Kill Decision by Suarez, Daniel
A Small Fortune by Audrey Braun