Beneath Paper Cranes (a coming of age short story) 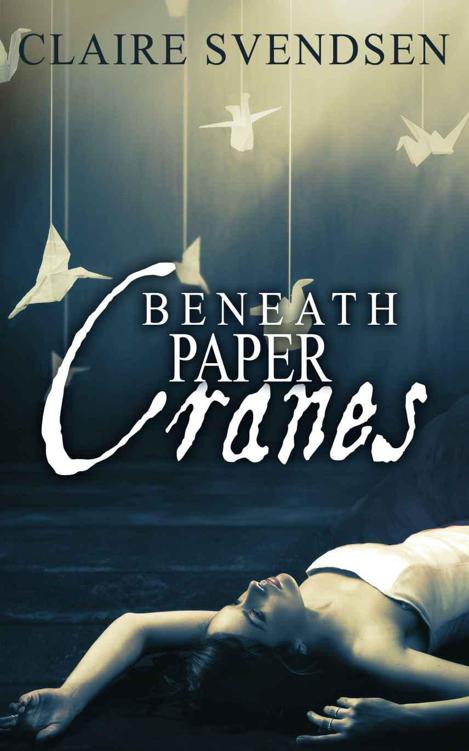 A coming of age short story

No part of this book may be reproduced or transmitted in any form or by any means, electronic or mechanical, including photocopying, recording, or any information storage and retrieval system, without prior written permission of the Author, except for the use of brief quotations in a book review.
Your support of author’s rights is appreciated.
This book is a work of fiction. Any resemblance to actual persons living or dead, places or events is purely coincidental.

To wish for something with all your heart,

To wish and know your wish is dark,

To want it more than the air you breathe,

To want it so badly you almost believe.

I have a tumor in my brain with a fancy medical name but I just like to call him Bob. It makes the whole dying young thing easier to deal with. Bob wasn't invited, he crept in when I wasn't looking and took up residence in my brain stem. I didn't even know he was there until the blinding headaches got so bad I ended up in the emergency room. That was the first time I learned Bob was squatting in there and despite several eviction attempts, Bob remains.
Little bastard.

“I really can't believe you're not going,” Chloe says.

“What's the point?” I say, picking at a loose strand on my shirt.

“What's the point?” She sits up on one elbow and glares at me. “The point is that I don't want to go to graduation alone, that's the point. Besides, don't you think your parents will want your diploma? You know, to frame or something?”

“Exactly.
How morbid is that? I already told them if they make a shrine of my room, I'm going to haunt them forever.”

Chloe throws a pillow and it hits me square in the face. I grab the one I'm leaning on and toss it in her direction. It knocks a china unicorn off the shelf behind her that shatters as soon as it hits the floor. For a moment she looks mortified,
then
we both start to laugh. I'm throwing anything I can get my hands on, including a particularly ugly bowl I made out of clay when I was four. I completely miss her on purpose and it thuds against the wall, cracking in two.

“What's going on up there girls?”
Mom's voice carries over the sound of our laughing.

“She's going to be so mad that you're breaking all this shit,” Chloe laughs.

I pick up the picture of Chloe and me when we were ten. It was Halloween and for some stupid reason we decided to go trick or treating as cupcakes. I think it had something to do with the other kids calling us fat.
Sort of an ‘up yours’ to the bullies.

She lunges forward and grabs the photo, clutching it close to her chest with tears in her eyes.

“I'm sorry,” she wipes her eyes. “But I need something to remember you by.”

“Why don't you come down and help me make dinner.” It’s Mom, trying again to lure us down, this time from the bottom of the stairs.

Since I got sick, Mom's had lots of crazy ideas. I don't blame her. When conventional medicine fails, you tend to look for alternatives. It's just the alternatives kind of suck. Like now, I'm only allowed to eat green organic food.
Something about chlorophyll and antioxidants.
I'm pretty sure lettuce and spinach aren't going to get rid of Bob but that's not what she wants to hear. So I force down her food with a smile on my face and a queasy stomach but a girl can only take so much.

“Where are we going?” Chloe asks.

I slide up the window and step out onto the ledge.

“To get a damn burger and fries.”

“But what about
your
Mom?”

We run silently along the roof of the back porch and slide down the drain pipe. Chloe falls and splits her knee open. I slap my hand over her mouth to stop her from crying out,
then
pull her up. Mom is still in the kitchen, standing at the sink washing bugs out of the organic lettuce. If she turns her head the wrong way, she'll see us. So I slink along the fence dragging Chloe behind me and when we finally make it through the gate, we run like hell.

“I know,” she says breathlessly.

The sun bursts from beneath the clouds as we run down the hill into town, making everything bright and alive. I know people say that you appreciate life a lot more when you're going to die but I don't think that's exactly true. I mean, I thought life was pretty damn awesome before I got stuck with Bob. Chloe and I spent last summer on a calorie counting diet and both shed ten pounds, plus I got accepted to Harvard and really wanted to go. There's only one thing I'll regret but no one knows about it. Not even Chloe. Something I have to do before I die, if I get the chance.

The cafe is quiet. Chloe and I take a table outside in the shade and both order burgers with everything and
fries
. I even splurge on a chocolate milkshake. I stopped counting the calories after Bob moved in. Fitting into that bikini just doesn't seem so important anymore.

“Your Mom is going to flip out when she realizes you've gone again,” Chloe pulls a band aid out of her bag and sticks it on her knee.

“She'll get over it. She might as well start letting go now.”

“I don't think that's how it works. I think she just wants to spend as much time with you as she can.”

“I get that, I really do but she's smothering me. I don't want to spend my last few months with her hanging onto me like a toddler. You know those leashes they put on little kids so they don't run away? That's what it feels like she has on me and every day it gets shorter and shorter.”

Chloe shifts uncomfortably in her chair. I know she feels bad for my Mom and I do too but I can't do anything about dying and leaving her alone. That's just the way it's going to be. Somehow I'm the one who managed to pass right through the stages of grief with flying colors but she's stuck somewhere between
denial
and bargaining. As in, if I eat the crap she wants to feed me then maybe I'll be cured by the miracle of organic food. I'm pretty sure Bob has other ideas but if she thinks she can kill him with healthy food, I don't see why I can't drown him in fat. After all, fat is far worse. I'm sure he's not too keen on it clogging up his blood supply.

I have half the burger stuffed in my mouth when Chloe shoves me in the arm.

“Hey, watch it,” I say, as mayonnaise slides down my chin and onto my shirt.

She points to a group of kids from our school that has just arrived. The boys are holding skateboards, the girls clutching their cell phones. They're the group everyone wants to be in. The ones who have all the cool parties that people talk about for weeks. Usually I just flatten myself against the lockers when they come down the hall. I'm so glad I won't have to do that anymore.

“You know,” I say, “I was so looking forward to Harvard. I'm pretty sure you don't have to be super athletic or fake beautiful to be in a cool group there.”

“That's not why I was pointing at them,” Chloe says under her breath. “It's
Ethan,
I swear he was totally checking you out.”

“Swim team Ethan?” I squint against the sun, trying to see.

“Yes. Hot, captain of the swim team Ethan was checking you out. I swear.”

I stare at the group, the people who've made my life a living hell for the last four years. I wonder if I'll get to hang around after I die and torture them by moving stuff around or writing on the walls in blood. That would be cool. Having cute Ethan check me out in front of everyone? Not so much.

“He wasn't checking me out.” I say. “He was probably just wondering if we were nearly finished so they could have this table.”

“You're probably right,” Chloe sighs.
“But it really looked like he was staring at you.”

“Well he can stare all he wants. I don't care.”

But as Chloe goes back to her fries, I steal another glance. Ethan is sitting down on his skateboard, his t-shirt riding up to reveal a well-muscled back. I can just make out the jagged scar I know so well, the one I've seen every time I watched him compete at the pool. Rumor has it he got that scar when his foster Dad beat him with a broken beer bottle. Of course there are other rumors too but I don't believe any of them. Despite the group he hangs with, Ethan has never done anything to hurt me.

“Now you're checking him out,” Chloe says.

I finish my burger. It's so good, I can't believe I haven't eaten one every day since I learned about Bob. I'm running out of time to do all the things that are bad for me. Things I was always too scared to try. I steal another glance at Ethan and this time he actually is checking me out. He smiles as I look down at the table, my face flushed.

I shove my chair back and it hits someone, they grunt as it slams against their shin.

I look up into amber eyes and a sunburned face. It's Ethan, rubbing his leg where I hit him. He's clearly over exaggerating the extent of his injuries.

“At least you don't have a brain tumor,” Chloe snaps at him.

I give Chloe my best
death stare
and she looks guiltily away. She knows I'm the only one allowed to pull the tumor card. It's funny when I do it but not so much when other people do. She knows better. I shouldn't have let her take the cupcake photo. It all goes to hell when people start getting sentimental.

“How are you feeling April?” he says.

I turn and start to walk away but he follows.

I spin around so I can look him in the eye, expecting to see a smirk on his face but I don't. Instead I watch helplessly as he brushes a strand of hair from my face. His touch sends shivers down my spine despite the heat.

Chloe is hovering about in the background, trying to give Ethan and me space though for what I have no idea. The group he came with has taken our table and they are ordering food, all except for a particularly skinny girl who keeps glancing nervously in our direction.

Never Sit Down in a Hoopskirt and Other Things I Learned in Southern Belle Hell by Crickett Rumley
Disgrace by Jussi Adler-Olsen
Dangerous Games by John Shannon
Wake Me When the Sun Goes Down by Lisa Olsen
Murphy's Law (The Bounty Hunter Series - Book 1) by LeClair, Laurie
The Academy - First Days by C. L. Stone
Tell Me Something Good by Emery, Lynn
Dyson's Drop by Paul Collins
Family Affair by Saxon Bennett
The Vanishing Vampire by David Lubar