Read Beneath the Ice Online 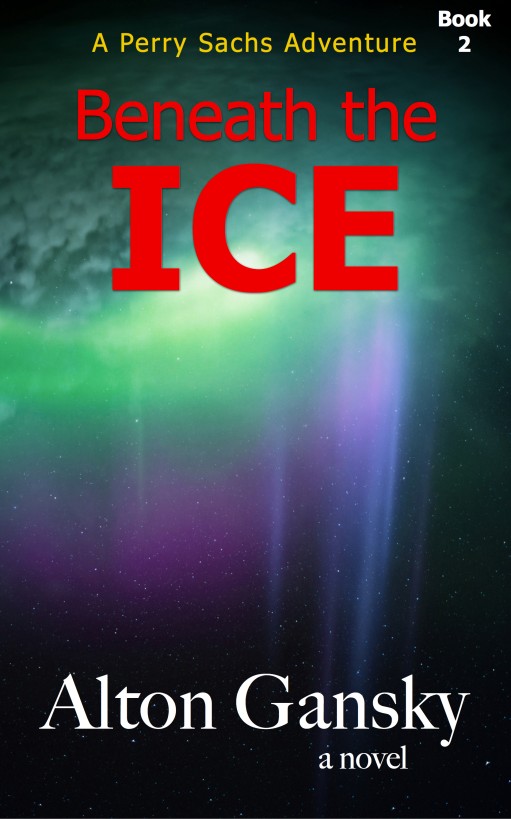 This ebook is licensed for your
personal enjoyment only. This ebook may not be re-sold or given
away to other people. If you would like to share this book with
another person, please purchase an additional copy for each reader.
If you’re reading this book and did not purchase it, or it was not
purchased for your use only, then please return to Smashwords.com
and purchase your own copy. Thank you for respecting the hard work
of this author.

All rights reserved. No part of this book may be
reproduced without written permission, except for brief quotations
in books and critical reviews.

Alton Gansky is the author of 4o books, novels and
nonfiction. He is a former firefighter, architectural project
manager, and Christian minister. He resides in Central California.
www.altongansky.com

Dr. Harry Hearns
struggled
to place the plastic-coated
electric lead into the tiny copper socket. He failed for the third
time. Anyplace else, any other time, this would have been a simple
task, but this was not just any place or any time.

The lead slipped from his hand, and he swore
at the stateside engineers who designed the sensitive instruments
in warm, comfy offices.

“Hey, Doc.”
The voice scratched out of a microphone/speaker
attached to the lapel of Hearns’s parka.
“We’re gonna go bingo fuel if you don’t cart your academic
fanny back in here.”

More swearing. Hearns released the lead,
raised his hand to the mike, and keyed it. “You’re welcome to come
out and help,” he snapped. “Assuming the wind isn’t too much for
your sensitive skin . . .” He returned his attention to the device
before him.

“Speaking of wind, it’s picking up,
and we pilots are kinda sensitive to that.”

Hearns chose not to respond. They would
wait. They had no choice.

Pulling his gloves tighter, he took another
stab at connecting the wire. It was like doing surgery while
handcuffed. Once again he fumbled the small connector, and it
slipped from his fingers. For a moment he considered removing the
glove, but he had been around too long to do something so foolish.
It wasn’t the cold he feared as much as the metal box and pole
before which he knelt. He had no desire to place bare, moist skin
next to metal that had been exposed to temperatures so far below
zero that most people could not fathom the effects.

The wind picked up, taking
ice crystals airborne and swirling them around like motes of
precious gems. The first time Hearns saw what scientists called
“diamond dust,” he stood in stunned amazement, moved by its beauty.
Now, though, bone-weary, cold, and fac
ing
a recalcitrant electronic component, it just annoyed
him.

“Too many years on the ice,” he said to
himself. The puff of mist that escaped his mouth with the words
froze to his gray-brown beard.

The breeze stiffened, carrying with it the
sound of ocean slapping the sides of the ice. Hearns knew the ocean
was a half mile away and 150 feet lower than the plateau he stood
upon. He also knew the ice extended 1300 feet below the surface of
the frigid waters.

“Seriously, Doc. Mrs. Larsen didn’t
raise her little boy to be stupid. We’ve already made two extra
stops for you. It’s time to head back.”

He looked to his right at the Coast Guard’s
bright orange and white HH-60 Jayhawk helicopter that waited for
him fifty yards away. “Get off my back, Lieutenant Larsen. I’ll be
there as soon as I can.”

The surface beneath his feet shifted, and
the ice roared as if in pain. The small toolbox he had brought with
him danced on the ice.

Hearns keyed the mike again. “We’re on an
iceberg, Lieutenant, and icebergs move—which is why I’m here.”

That
was
why he was there, he reminded
himself. He had made icebergs the object of twenty years of study.
This berg, B27, was especially interesting, the second largest
iceberg known, second only to B15, which calved off the Ross Ice
Shelf in March of 2000. B15 had been nearly 4,200 square miles, a
little less than the size of Connecticut—170 miles long and 1,000
feet thick. B27, or “Kong” as it was known to the engineers and
scientists that made this part of Antarctica home, was eighty-five
percent of that but well worth studying. It might be only the
second largest berg, but it was still three times the size of Rhode
Island.

Hearns had studied
icebergs with the National Ice Center for most of the last two
decades. His specialty was formative ice structures. No one knew
more about how bergs formed. What he didn’t
know was why they broke apart—calved—like they
did.

Kong had calved from the ice shelf four
weeks before and had been slowly moving out to sea. Hearns knew
that Kong would split soon. B27 had done so just a few weeks after
it dropped into the ocean. Not even an iceberg the size of Kong
could defeat the un-relenting pounding of the sea. It would last
years, but not many. Bit by bit it would fragment into smaller and
smaller pieces. The berg would become two, then four, then a dozen,
until it disappeared into the ocean, its majestic white grandeur
indistinguishable from the cold, churning sea.

Now the iceberg was
beginning to break in two. Hearns want
ed
to know why.

Two weeks after the B27
separated from the ice shelf it had been part of for more years
than could be numbered, Hearns and his
team had placed instruments along the length of it. Those
instruments monitored temperature, wind speed and direction,
baromet
ric pressure, and much more data.
More important to Hearns, however, they monitored the iceberg’s
position. A GPS monitor in each instrument station took periodic
readings and radioed the information to McMurdo Station, Hearns’s
home base.

Two of the GPS stations on
Kong had quit broadcasting; Hearns was sure that had to do with
cheap transmitters.
Can’t do real science
when they pinch pennies,
he
thought.

He took a deep breath and shut out the sound
of the wind, the moaning ice, and the distant water and made
another attempt to secure the tiny connection. “Someone is going to
hear about this,” he promised himself.

“Finally,” he said to the rising breeze. He
stood, shut the metal box, and secured the lid. He took one last
lingering look at the triangular aluminum mast that held the
antenna, gave the support chains a tug to make sure they were snug,
then jogged toward the helicopter.

“That’s what I’m talking about, Doc.
Put some heart into it.”

The ice shook and
rumbled.
Icequake.
Hearns lost his footing. He tumbled to the hard ice in a
heap; the toolbox skittered across the surface. The ice groaned in
agony.

Hearns struggled to his feet. Hot bolts of
pain fired up his back and down his leg. He took a tentative step:
pain, but not severe. That was good. The last thing he needed out
here was a broken hip. He trundled on, this time with a limp.

The ice shuddered again, and Hearns stopped,
turning to his left. A crack had appeared—right where he had
expected it, right where he had predicted it! Although he had been
right about the place where the calving would happen, he had been
wrong about the time. His calculations showed that it would be at
least another week before an appreciable hunk split off.

Another quake; the gap in the ice
widened.

For once, Hearns agreed with Lieutenant
Larsen. Despite the pain in his hip, Hearns broke into a full run.
The cold air bit his lungs with each inhalation. He felt as if he
were gulping angry bees.

Each step crunched the ice beneath his
boots. The wind rose another notch and pushed against his form. The
helicopter had been fifty yards away when he started. Any closer
and the constantly turning rotors would have stirred up ice in
Hearns’s work area. Now he wished he hadn’t been so cautious.

“This baby is splitting up, Doc.
Run!”

He was running, but he was running with a
box of tools in one hand and heavy boots on his feet. He was in
good shape for a man of fifty, but the Antarctic climate didn’t
care. It could send the strongest man to his knees without
warning.

At last he reached the
helicopter. The side door slid open, and a pair of strong hands
seized the parka he was wearing. A half-sec
ond later, Hearns was inside, and the loading door slammed
shut.

“Strap in,” flight mechanic Neil Russo
commanded. Then he spoke into the microphone that hung from his
orange flight helmet. “He’s in. Feel free to bug out.”

Hearns sat in the nearest jump seat and
pulled the safety harness across his chest and lap. The engine
began to whine as the rotors came up to speed. Dr. Hearns slipped
on his helmet. He would now be able to hear what the crew said over
the roar of the engine and the pounding of the rotors.

“Hold on,” Larsen snapped. “We done wore out
our welcome.”

Hearns’s stomach dropped like a stone as the
chopper took to the air. He hated flying, but this time it was a
welcome feeling.

“Oh, baby,” Larsen said. The words poured
through Hearns’s helmet earphone. “I was getting just a touch
nervous there.”

Hearns ignored the banter. He waited a
moment until the helicopter had settled into a gentle ascent, then
released his restraints and made his way to the windowed door. The
iceberg receded from them as the craft continued its rise. Below
was the familiar shape of Kong, a white mass of ice as far as the
eye could see. What wasn’t familiar was the growing crack that had
only been a supposition before.

“My video camera . . . where is it?” Hearns
didn’t wait for an answer. He lurched toward the seat he had
occupied on the flight from McMurdo. The helicopter pitched
slightly but not enough to slow Hearns’s movement toward the seat.
Next to it, fastened in like a passenger, was the worn backpack he
carried on every trip. Yanking it open, he plunged a gloved hand
inside and removed a small video camera. He paused, then reached
back into the satchel for his digital camera.

“What are you planning, Doc?” Russo wanted
to know.

“Take this,” Hearns ordered. “Turn the
switch on top until it points at the camera icon. Start
snapping.”

“
Do it, man. We’re missing it.” He tossed the camera in
Russo’s
lap and returned to the window. He
activated the video camera and adjusted the zoom. Through the
eyepiece he saw the fracture become a split and the split a
crevasse.

“Wow,” Russo said. “Are you seeing this,
Lieutenant?”

“Roger that. Looks like we bailed just in
time.”

“Spin us around,” Hearns said, pushing back
the hood of his parka.

“No can do, Doc. I told you, your extra
stops have eaten up more fuel than we planned. We’re headed
home.”

“If you wanted to play it safe, you should
have become a plumber,” Hearns shot back. “Now turn us around.”

“I joined the Coast Guard thinking I’d be
patrolling the beaches of sunny California, not hopping from
iceberg to iceberg in the Antarctic. I’m not here by choice.”

Hearns felt the chopper bank to the left.
His heart raced more from what he was seeing than from the threat
he had just escaped. Kong was separating, calving into several
smaller icebergs. Scientists had seen it happen before, but not
Hearns and not from a helicopter flying overhead. He had no
intention of missing his chance to record it.