Read Benny: A Tale of a Christmas Toy Online

Benny: A Tale of a Christmas Toy 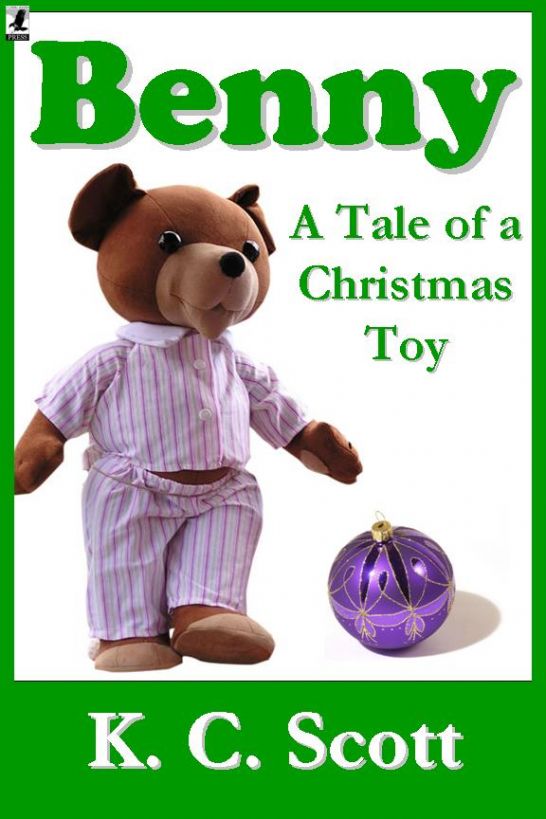 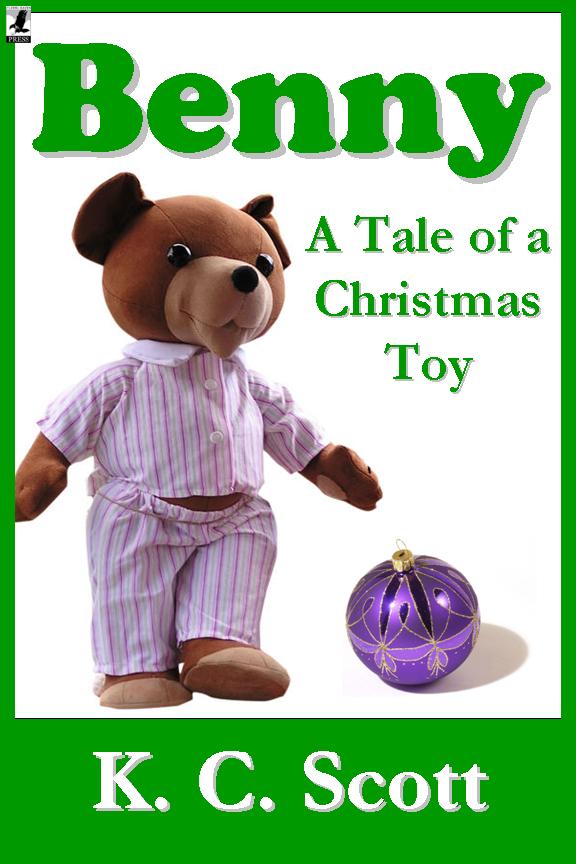 A Tale of a Christmas
Toy

|| Includes a sneak preview of
Dog Food and
Diamonds,

Smashwords Edition. Electronic edition
published by Flying Raven Press, December 2010. Copyright © 2010 by
K. C. Scott. All rights reserved, including the right of
reproduction, in whole or in part in any form. This book is a work
of fiction. Names, characters, places and incidents either are
products of the author’s imagination or are used fictitiously. Any
resemblance to actual events or locales or persons, living or dead,
is entirely coincidental. For more about Flying Raven Press, please
visit our web site at
http://www.flyingravenpress.com
.

A Tale of a Christmas
Toy

Benjamin leaned back in the futon and
watched Annie rip through the silver wrapping. The box was nearly
as tall as her, and certainly wider. He cupped the mug of cocoa on
his knee, feeling the heat seep through his terrycloth robe to his
leg. He had scalded the roof of his mouth, but he didn't care.
Watching his daughter's unabashed, six-year old enthusiasm helped
him forget about the two real estate deals that had fallen through
last week. At least for a few minutes.

The living room window looked out on
snowflakes as big as quarters falling on the hedge of junipers. The
tiny stereo in the corner, the one they had gotten from his mother,
played Bing Crosby's
White Christmas
. Outside, a snowplow
rumbled over Orchard Street.

It was early, not yet six, but Pam was
already in her white nurse uniform. She squeezed his hand, and he
felt the reassuring bite of her wedding ring

He nodded, took a slow sip of the
mint-flavored chocolate, and watched his daughter's reaction when
she had the present completely unwrapped.

The box had a picture of the furry blue bear
with a white muzzle. Written across the top in stylish gold letters
were the words
The Amazing, Talking, Bluebear Brother
. Pam
knelt besides Annie and helped her open the box. Sitting next to
each other on the taupe carpet, blond hair pulled back in pony
tails, they looked remarkably alike.

"Look what Santa got me, Dad! A Bluebear
Brother!"

Pam pulled the bear out of the box, tearing
off the plastic bag that covered it. The toy was smaller than it
looked on television, and its downy fur was an even brighter shade
of cobalt blue. The black plastic eyes reflected the red and blue
glow from the tree lights. The muzzle looked more mechanical than
the rest of it, the fur shorter, the upper and lower jaw receding
into cracks in its face.

Annie got up and thrust the bear into
Benjamin's lap. He barely managed to lift his mug into the air.

He put the mug on the coffee table, then
took the bear from her. Underneath the soft torso, he felt hard
plastic. Turning it over, he saw a silver zipper set in the bear's
back. He unzipped it and found the sleek black controls for the
player, the slot for the memory sticks, and a blank green LCD
display. By this time Pam had retrieved the batteries from the
kitchen, which she handed to Benjamin.

He slipped open the battery compartment and
popped in the batteries. The LCD display brightened, and the word
Ready
appeared. There was a whirring of gears.

He turned it around. Sure enough, white
eyelids whisked over the eyes every few seconds.

He searched for the play button. The buttons
were small, and none seemed to be marked.

"Not
Benjamin
. Benny. I can call him
Benny."

Benjamin finally found the
Play
button, and pressed it down. Immediately there was a blare of
trumpets.

A boyish voice began to speak.

"Hello, I'm Bluebear Brother. I have lots of
stories to tell. If you would like to hear a story . . ."

Benjamin placed the bear on his knee, facing
Annie. He expected Annie to smile or laugh, but instead her
enthusiasm vanished. She looked glum.

"His mouth's not moving," she said.

"His mouth's supposed to move."

He turned it around. Sure enough, as the
bear continued to talk about all the stories that could be
purchased, the mouth wasn't moving. The eyes blinked, but the
muzzle didn't even twitch.

"What's wrong?" Pam said, looking down on
them.

"I don't know," he said. He tried some of
the other buttons. The volume went up and down. The narration
started over. The narration skipped ahead to another section.
Nothing changed the mouth.

"Maybe you didn't turn the mouth on," Pam
said, standing next to him, arms crossed.

"I don't remember hearing you had to turn on
the mouth," he said.

She retrieved the directions from the box,
scanned them for a few seconds.

"You're right. The mouth is just supposed to
work."

"Well shoot," Benjamin said, feeling
depressed. He had braved those long lines for nothing.

Pam looked at Benjamin. Her expression said
it all:
what should we say?

"Oh, well," Benjamin said, fumbling for an
answer. "Santa is gone, that's true, but . . . he always sends one
of his elves around to pick up the broken toys and fix them. So
we'll get a new one for you."

"No, no, not today. Santa and his elves are
very tired the day after Christmas. But tomorrow."

"Why don't we open another one of your
gifts," Pam said.

"Here, look at this one. It's certainly
heavy. Why don't you open it?"

Annie stuck out her lower lip, but didn't
resist the square package Pam held out to her. She opened this one
more slowly, frowning each time she looked up, but once she had it
unwrapped, her expression changed.

His wife took a seat next to him on the
couch, placing her hand on his knee. Together they watched their
daughter take the smooth green ball out of the cardboard
container.

Annie sprang to her feet.

"I need to get my red one too," she said,
and raced out of the room.

"Dear, wait—" Pam began, but her daughter
had already disappeared down the hall. When she was gone, she
turned to Benjamin. "So where did you get it?"

"Probably. I'll take it back first thing in
the—"

Benjamin saw his daughter's shadow at his
feet. He turned, and there she was, looking shocked and confused.
The cassette player clicked as it came to the end of the tape, the
room silent except for a car sloshing over the street outside.

"Oh dear," Pam said. "I thought you were
going to get your ball?"

"I thought Santa bought it," Annie said. "It
said Santa on the card."

"Well, he did," Benjamin said. "He just — he
couldn't pack it in his sleigh this year because he was so loaded
down, so he sent money to us, and—"

"Dear," Pam said. "Please. It's one thing to
let her harbor a harmless fantasy, and another thing to lie
blatantly. It's okay. It's time."

"You're old enough now to know the truth,"
Pam said. "I'm sorry, dear, but there's no Santa Claus. That's just
make believe for kids. Your Mommy and Daddy buy everything for you
because they love you."

It was one of those moments Benjamin would
remember for the rest of his life. How his daughter's perfect skin
seemed iridescent in the wan, gray light from outside. How the
light in her eyes, always watery and shimmering, seemed to dim. How
her narrow shoulders slumped as if she had been dealt a terrible
blow.

It tore Benjamin up inside. He wished she
could have gone on believing the fantasy for another year or
two.

She looked up, stared at them both for a
long moment, and then said with utter seriousness, "I'm glad I
know."

"You are?" Benjamin said.

"Because," Annie said. "Because what if . .
. what if I grew up and I became a Mommy, and what if I never knew
that there was no Santa? Then I would be waiting for Santa to bring
the presents for my kids, but he wouldn't come. Everybody would be
sad. So I'm glad I know."

Pam squeezed Benjamin's hand, but she didn't
speak. Benjamin opened his mouth to say something, but his throat
had constricted.

"So if there's no Santa," Annie said, "who
takes care of Rudolph?"

The next morning, Benjamin took the bear and
headed downtown. Pam had the day off. She and Annie were playing a
new board game his Aunt Francis had sent them, while also baking
chocolate chip cookies and a poppy seed cake for dinner with his
parents on Saturday. It was hard to leave the house with such
wonderful aromas in the air, but on the other hand it was good to
get away from his desk. He was getting bleary-eyed and depressed
going over his bleak prospects.

It was no longer snowing. A light breeze
swirled the powdery snow over the street. It was rare for it to
snow in Rexton, Oregon, but Benjamin had grown up in Minnesota, and
he found blanket of white refreshing. Traffic was light. The snow
crunched underneath the studded tires of his Ford Ranger. He drove
slowly, not because he was unaccustomed to driving in such
conditions, but because most of the other drivers
were.

The Best Australian Essays 2015 by Geordie Williamson
Lord Grenville's Choice by Vandagriff, G.G.
Found by You by Victoria H. Smith
Confined (A Tethered Novel, Book 3) by Snyder, Jennifer
For the Win (Playing for Keeps Book 1) by Garza, Amber
The Way It Never Was by Austin, Lucy
The Blunderer by Patricia Highsmith
Bought (Unchained Vice Book 3) by Nicolette Hugo
Winter Warriors by David Gemmell
Four Weddings and a Fireman by Jennifer Bernard