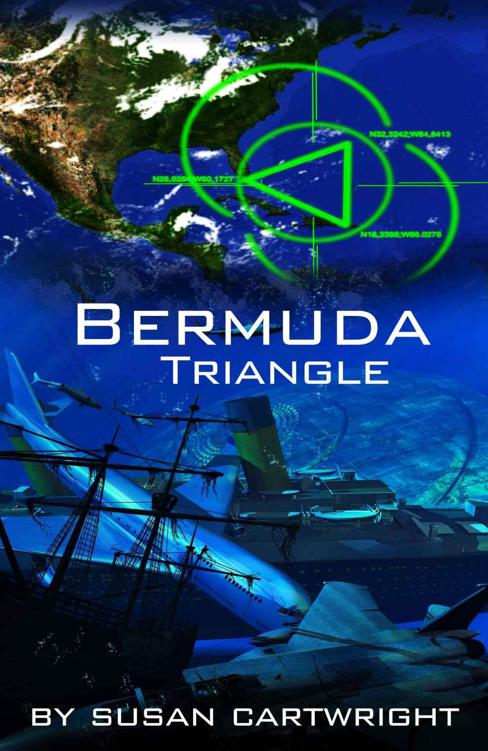 This book is protected under the copyright laws of the
United States of America. Any reproduction or other unauthorized use of the
material or artwork herein is prohibited.
This book is a work of
fiction. Names, characters, places, brands, media, and incidents are either the
product of the author’s imagination or are used fictitiously. All rights
reserved.

4. Crack in the Armor

"I beg your
pardon, Lieutenant?"

"Captain,"
Lieutenant Dave Terwin repeated, "Man overboard!" The officer of the
deck's expression remained neutral. A veteran, he had the alert-yet-relaxed demeanor
so characteristic of experienced naval men. A sharp, louder than usual voice betrayed
his urgency.

The captain of
the
USS Maryland
,
Commander Mark Hanlon,
was of medium height, with short brown hair and shrewd gray eyes. He glared at
Terwin and set his mug of coffee down. The distinctive thud was loud amongst
the background
conversational noise and purring of equipment cooling
fans. "
Is
this your idea of a joke, Lieutenant? Because if it is...."

The officer stepped
aside. "Skipper, perhaps you'd like to see for yourself."

All conversation
stopped as Captain Hanlon strode to the LCD interface of the command center.
Instead of a periscope,
Virginia
-class submarines utilized telescoping
photonics masts.
With high resolution cameras, infrared sensors,
range finders and electronic eavesdropping arrays -- the masts brought the outside
world into
Maryland
via fiber optic cable.

Hanlon stared. Twelve-hundred
yards away a man was afloat, lolling on the waves like a rag doll. He wore what
looked like a U.S. Navy lifejacket. Captain Hanlon sounded the alert and lifted
the handset. "All hands, prepare to surface. XO to the bridge. Deck crew
prepare for emergency retrieval. Helm," he said in a tight, level voice, "slow
ahead. Heading two-two-zero." He waited for the responsive vessel to move,
calculating position and distance, and in a moment said, "Yes, that's it.
All stop."

The massive
nuclear submarine
moved
gracefully, barely creating a ripple in
the coffee of crewmen who, moments before, had been enjoying lunch a deck
below.
Maryland's
crew numbered one-hundred and thirty-four, with fourteen
officers and a hundred and twenty enlisted men. Of those, one-third were on
duty. The others could be found throughout the vessel: reading from an
extensive library of both e-readers and hard copy (almost every current
newspaper or magazine was brought on board before departure); resting, playing
games, watching movies, or working out in the gym.

"Get the
medical team on deck, Lieutenant. The XO has the con. I'm going up topside."

Captain Hanlon strode
through the command center, passing men on watch.
Maryland
had been
submerged for almost two months while executing a standard
surveillance and reconnaissance mission. Positioned
mid-Atlantic,
they were 460 miles southwest of the Azores Islands. In five days they would
return to base in Connecticut -- just in time to bring in the New Year 2012.

The deck tilted
to a twenty-five degree angle and began to level off. Hanlon lurched and swayed
without slowing pace. He had anticipated the normal conclusion of an ordinary
patrol.

Now?
He
shook his head.
Not going to happen.

He thought of
his wife, Noelle. Astrology interested her, but he considered it mumbo-jumbo,
pure and simple. Still, submariners could be a superstitious bunch. While he
didn't own a rabbit's foot, he never walked under ladders. He liked to hedge
his bets. Noelle always saw him off with admonitions to be careful. Her horoscopes
were forever predicting, "life changing events." He supposed they had
to be right sometime.

God I hope not. I
like my life as it is.

Hanlon stepped
over a bulkhead, moved through a narrow corridor and then upward, nodding at a petty
officer who moved aside to let him pass. As he came up on deck he took a deep
breath of fresh salt air. Solid, slate-gray cloud surrounded them, making little
break in the horizon. An icy wind blew from the northwest and a six-foot swell
was running, the rolling waves streaked with whitecaps.

T
he
boatswain's mates heaved lines overboard, lowering the
craft. Five
crewmen climbed down to board her. The zodiac inflatable, a paltry fifteen feet
long by six feet wide, was dwarfed by the massive bulk of the surfaced
submarine. While
Maryland
rolled lightly on a petulant sea, the rubber
raiding craft was tossed about like dice in a crapshoot.

Captain Hanlon
watched through his binoculars as the crew of the inflatable struggled toward
their objective, the outboard motor humming. His eyes narrowed and his brows
drew down in concentration. It was difficult to see the guy as his orange
lifejacket bobbed in and out of sight with each rolling swell.

The man is a rag-doll,
he
thought, recalling a childhood game where he and his siblings rolled and fell in
the back seat with every stop and turn of his parents' moving car.
He must
be dead.

He watched the inflatable
slow. With a surging wave
Maryland
dipped into a trough and a large swell
blocked his view. He stared through his binoculars, training them back and
forth like a gun turret in an attempt to regain contact. A few moments later he
saw his men had already hauled their target from the sea and were fighting their
way back toward
Maryland.

Captain Hanlon
lowered his binoculars.
Maryland's
doctor and two seamen stood nearby
with a stretcher and medical equipment, but he ignored them. He didn't feel
like talking.
Maryland
was at the precise coordinates where the submarine
USS Scorpion
sank in 1968, with the loss of all her crew. At the time there
were accusations of conspiracy and Soviet involvement. More recent evidence
supported a "cataclysmic event" and possible torpedo malfunction.
Naval investigation was inconclusive. Hanlon's jaw tightened. There was no
logical reason for him to feel uneasy. Why should any of this bother him? The
Scorpion
catastrophe was done and dusted years ago.

The back of Hanlon's
neck tingled. He had the urge to cross himself, but not in respect for the dead
man that would soon be brought aboard his boat. Bernard Shaw's poem came to
mind,
"Mine will be a watery grave, I feel it in my bones. Men will me
in canvass sew, and weigh me down with stones."
Here he was, plucking
a corpse from the sea, while
Maryland
was floating above a maritime
graveyard of ninety-nine lost souls. There was some sort of macabre irony there
somewhere.

The zodiac came
alongside and the petty officer in charge clambered up
Maryland's
side on
a steel rope ladder. His voice was loud over the sound of whistling wind and
waves as he shouted, "Captain! Sir...he's alive!"

The unconscious
man was brought up on deck and onto the waiting canvas stretcher. Naked except
for his life preserver, the man was thin and suffering from exposure -- but he
was breathing. Strands of wet hair lay in stark contrast, black against his
pale face. He seemed about thirty-five years old, perhaps younger, and had the
look of a fighter. His hardened grimace refused to give in, even to
unconsciousness. His nose appeared to have been broken more than once. Hanlon
registered these details without conscious thought. There would be time to
think of them later.

Corpsmen cut
away the lifejacket, covered the man with blankets, and strapped him in. They picked
up the stretcher and started to move. The doctor glanced at the captain in silent
query and Hanlon nodded. With almost no break in stride, the medical team
whisked their patient away, disappearing down the main hatch. The entire
operation had taken minutes.

Maryland
seemed
empty once they were gone.

Hanlon squatted
down on the black deck and shook his head in disbelief.
Not dead.

It was
incredible. He had just picked up a living man from the middle of nowhere, in
the cold water of an open ocean. He couldn't recall anything more unusual in
twenty-eight years at sea. He looked at the severed debris of the man's lifejacket,
the only remaining evidence of the fantastic events of the last few minutes. Reaching
over, he picked up the dusty orange-colored vest, attempting to get a firm grip
on what, in the space of moments, had become a tenuous reality.

Glancing at the
dripping material, Hanlon's pulse sped up and his hand went to his heart.

For a moment he
stopped breathing. His hand reached for
Maryland's
solid hull as he swayed
with shock. Printed on the side of the lifejacket in faded letters were the
words:
"Property of US Navy -- USS Scorpion."

Ten hours later
the rescued man opened his eyes. Having left orders to be notified, Captain
Hanlon arrived within minutes. Outside the isolated infirmary he donned
protective covering. This extensive ordeal included pulling on a long sleeved
hospital gown that tied at the back, blue medical gloves, shoe covers and a
surgical mask that had clear protective eyewear. On
a contained
vessel they couldn’t risk the possibility of communicable disease.
Hanlon
looked in the mirror above the sink. His eyes held a mocking glint.

Perfect. I look
as stupid as I feel.

A corpsman came through
the thin plastic barrier that isolated the ill man, removing his own protective
clothing and placing it in a yellow plastic bag labeled "Infectious."
He spoke to Hanlon in a quiet voice; there was nothing new to report. The corpsman
washed his hands and left. Captain Hanlon passed through the clear plastic
barrier and sat down beside the man they had pulled from the sea. Nearby was
Maryland's
doctor.

"My name is
Hanlon," he said. "I'm captain of this vessel. Can you tell me what
happened?"

The man looked
up, but didn't speak. He stared without apparent understanding toward his
rescuers.

Captain Hanlon
studied the stranger and didn't like what he saw. The man was ill and not just
from exposure. His roughly six-foot frame seemed to hold no real substance. "Can
you tell us how you came to be adrift at sea?" Hanlon asked, his voice subdued
by his mask. When the visitor didn't respond, he spoke louder, "Can you
tell me your name?"

A flicker of
understanding flashed in the stranger's expression. He opened his mouth, but no
words came.

Captain Hanlon's
gray eyes narrowed. The man didn't seem unwilling to talk and he was too unwell
to be playing some sort of practical joke -- as was suggested by the powers
that be in Naval Intelligence. The guy could have memory loss from concussion,
shock, or trauma. Perhaps -- as feasible as anything else -- he didn't speak English.

"It may be
days," the doctor said, "before we can find out anything about him."

Captain Hanlon's
brows drew down. The back of his head itched. He curbed an impulse to scratch
it. Not a good plan with protective gear on. His mind filled with unanswered questions.

That Scorpion
lifejacket!
A shiver of dread poured through him. He had seen
some pretty strange things in his life, but this topped his SNAFU meter by
miles. How had this guy gotten hold of that lifejacket? How had he come to be naked
and alone in the middle of the ocean? At the exact co-ordinates
Scorpion
went down over forty years ago?

Captain Hanlon
said, "I wonder where he came from?"

The doctor
added, "Or where he's been…"

They both stared
at the stranger they had pulled from the sea and waited for his words. Neck
straining with effort, the fellow raised his head and said, "I've been to Heaven."