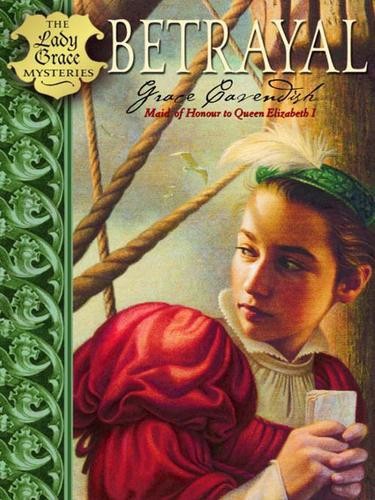 To the real Jim Woolley—he knows who he is

OF MY LADY GRACE CAVENDISH

AT THE MAIDS OF HONOUR, THEIR CHAMBER,

the other is quite filled up. Today was very dull, sitting about winding wool for the Mistress of the Maids, Mrs. Champernowne. At least there is something happening tomorrow—we accompany the Queen to the docks at Tilbury. Very exciting! That is why I am scribbling away and getting ink on my smock, for I cannot sleep at all. Lady Sarah can’t sleep, either. She is writing a letter to her parents bemoaning how poorly she is clad and how all her raiment is utterly out of fashion.

At least the Queen sent me to walk the dogs this afternoon. She has often given me that task since my mother, the Queen’s best friend, died a year ago, God rest her soul, leaving me in Her Majesty’s
care. I think she knows how much I enjoy playing with the dogs and spending time in the gardens, which I do, for that is where I find I am most reminded of my dear mother.

I changed into my horrible old hunting kirtle and then ran on tiptoes downstairs and along the painted passage to the door to the Privy Garden, where Mary Shelton was waiting with the dogs.

Now, I may like Mary Shelton better than I did—she has been very kind to me since my mother’s passing. But I didn’t want her getting nosy about what I do in the gardens—for I have a secret—so I invited her out with me. We raced up and down, with the dogs yapping away, and fairly soon she was red as an apple and puffing for breath.

“Are you sure?” I asked, putting my hand on her arm. “We could kick the ball for them again—”

“No, I need a rest,” she insisted, fanning herself with her hand.

Mary went inside, mopping her face. I can be quite cunning when necessary—not for nothing has the Queen appointed me her own Lady Pursuivant
(for the pursuit and apprehension of all miscreants who trouble the Queen’s peace at Court)!

I did run the dogs—throwing a stick for Henri, who is the chief of them despite being the smallest—and they all yelped madly. Then, when I was sure Mary couldn’t see me, I slipped through the little gate into the Herb Garden. We have just moved to the Palace of Placentia at Greenwich, which is one of the Queen’s most favourite residences. The palace gardens give right onto the river, and you can see the ducks and the swans and sometimes the pages and young henchmen fishing for salmon.

My friends Masou the tumbler and Ellie the laundrymaid have made a hidden place to sit inside the big yew hedge that surrounds the Herb Garden. And that’s where I found Masou, who was sitting looking worried, but there was no sign of Ellie at all.

“She said she might be late,” Masou explained. “The Deputy Laundress has her running about like a hunted rabbit.”

Mrs. Twiste at the Whitehall laundry is a kind lady, but Mrs. Fadget, her deputy at Greenwich, is a nasty hag who loves to order poor Ellie about when we are at Placentia.

I settled down and watched Masou, who was idly
tossing red and green leather balls up and about his head. A bit of wood from the ground joined them, then a stone. It’s amazing what Masou can do—turning somersaults in midair, juggling, and balancing. He’s getting very big-headed because Mr. Somers—who’s in charge of the tumblers—says he’s so good. So I don’t ever tell him, but I still like to watch.

We heard her cough first, then poor Ellie came dragging herself into the little hide and collapsed onto the ground next to me. She was coughing violently and her cheeks were flushed. I put my hand to her head as my mother used to do and it was all hot and dry.

“It’s just that cold I had last week gone to my neck,” she replied. Her throat sounded as if she had been eating sandpaper. “And that Mrs. Fadget”—she turned her head and spat—“I hate her. She had me up till past midnight wringing out sheets, and then up again at dawn to grate the soap. Then I was putting shirts on the hedge and I missed dinner. …”

I felt terrible. I usually bring Ellie something to eat and I’d forgotten. She saw me patting my pockets.

Masou and I looked at each other, feeling very worried now. Ellie! Not hungry? This was bad.

“You should be in bed, Ellie!” I told her. “You should be drinking horrible willow-bark tinctures and sniffing the smoke of henbane of Peru.”

Ellie laughed. “Tell Mrs. Fadget,” she said. “What’s ’appening tomorrow? The Queen’s watermen were moaning down at the buttery about how early they’ve got to get up.”

“The Queen’s going to Tilbury,” I explained. “And we’re going with her to see the Royal Dockyards.”

“Oh. And will you put it in your daybooke?” Ellie asked curiously.

“Wish I could do that. Write, I mean,” Ellie went on wistfully.

“Only my name. But all the things I see—and the stories I hear in the laundry,” she croaked. “I wish I could write them down.”

“You could tell me and I could write them in my tongue,” suggested Masou helpfully.

“No good to me, I can’t read that, neither,” Ellie
said, and sighed. “I wish I could read them ballad sheets. Or I could save up all my pennies and maybe, one day, even buy a book and read it!”

My chest felt all tight and heavy. Ellie’s voice sounded so sad, as if actually
buying
a book was a mountain she could never hope to climb—and the Queen
gives
them to me! I put my arm round Ellie. “I wish I could have you as my tiring woman instead of sharing Olwen or Fran with the other girls, but the Queen keeps forgetting.”

“What I really want is a good sleep,” muttered Ellie, and coughed and wrapped her thin arms around herself. Masou took his jerkin off and bundled it up for a pillow to her head. She lay down with a sigh and Masou very softly sang her one of his funny wailing little songs.

Poor Ellie, it is so unfair—she has to keep working even when she’s ill, while I have the Queen’s own physician to tend me if I so much as sniffle! And I hardly ever get ill anyway. Mind, I don’t have to forage around for food, or work till midnight on cold, wet sheets—I’m sure that has something to do with it.

I left them there and came back to the Privy Garden, where I found Mary Shelton wandering about looking all upset.

“Where did you go?” she demanded. “I was looking for you in the Orchard but you weren’t there.”

“Oh,” she replied, and stopped looking so nosy—Mary doesn’t like climbing trees. “Well, the Queen wants you.”

When I reached the Queen, I found that she wanted me to help brush her hair this evening—which I like doing despite having to be so careful of the tangles in her curls. She snaps and swears if you pull even slightly and her hair is naturally quite frizzy, so it knots. She is talking about having the whole lot cut off and wearing a wig instead!

I’d better get to bed now. Writing this has made me sleepy—and we’ve got an early start tomorrow.

Now I have but a few moments to write a little—there! A first blot, too. I can’t help it, the sun is not yet up and my candle is small.

We have all arisen early to accompany Her Majesty on her visit to Tilbury—where King Henry’s old naval yards are. Her Majesty has been entreated to visit the yards by Mr. John Hawkins, a most notable seafarer and merchant to the New World, whose passion for all things naval seems to know no bounds! He is making suit for the office of Secretary to the Admiralty as he has great plans for the Navy. The Queen finds him charming and has agreed to hear him. And he has assured her that we shall have no need to be afeared of bawdy sailors during our visit. Fie!

Left Behind: A Novel Of Earth's Last Days by Lahaye, Tim, Jenkins, Jerry B.
The Alloy of Law: A Mistborn Novel by Sanderson, Brandon
Read My Lips by Herbenick, Debby, Schick, Vanessa
14 Christmas Spirit by K.J. Emrick
With This Ring by Amanda Quick
Love takes wing (Love Comes Softly #7) by Janette Oke
Guardians of Ga'Hoole: To Be A King by Kathryn Lasky
Call If You Need Me by Raymond Carver
A Fire Upon the Deep by Vernor Vinge
Unmask (Adrenaline Series (Stand Alone) Book 4) by Neal, Xavier