Read Betrayals of the Heart Online

Betrayals of the Heart 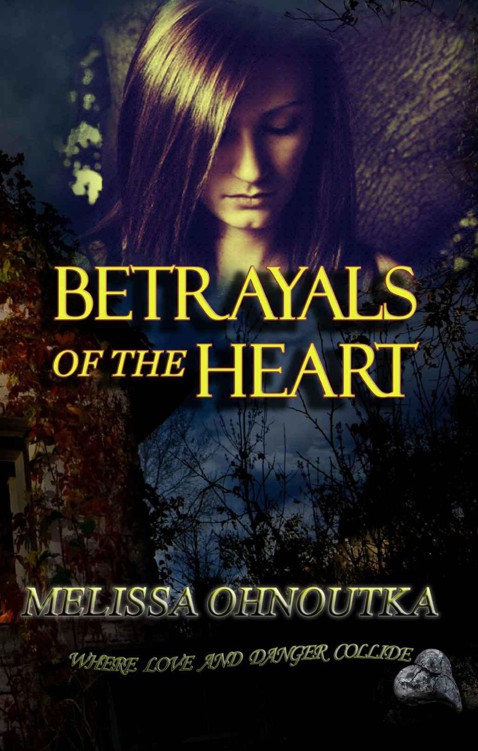 BETRAYALS OF THE HEART

Betrayals of the Heart

ALL RIGHTS RESERVED
. Except for use in any review, the reproduction of utilization of this work in whole or in part in any form by any electronic mechanical or other means, now known or hereafter invented, including xerography, photocopying and recording, or in any information storage or retrieval system, is forbidden without the written permission of the author, Melissa Ohnoutka.

This book is a work of fiction. Names, characters, places and incidents are either the product of the author's imagination or are used fictitiously, and any resemblance to actual persons, living or dead, business establishments, events or locales is entirely coincidental.

One Makayla Carter expected to follow the same predictable path it had over the span of her ten year marriage to the same man, with the same kids, living in the same house, in same little conventional town in south Florida.

Until the phone rang.

After eyeing the caller ID, Makayla spun around and headed back to the laundry room with no intentions of answering the nuisance call. These unknown numbers usually resulted in a fast talking solicitor. She avoided them with as much vigor as she had her skinny, freckled-face admirer from the seventh grade.

And then she heard it.

She cringed, her entire body stiff. The moment her five-year-old son picked up the receiver in the master bedroom all hopes of avoidance vanished.

“No, Nick. No,” she whispered.
Great.
No dodging the confrontation now.

“The phone was ringing, Momma.” Her youngest son bounced on the bed, the phone literally glued to his ear due to the peanut butter and jelly on his sticky fingers.
Dang it.
He’d found her hiding place and helped himself to the sugary treat again. This was going to be an interesting afternoon. If only her oldest son didn’t like grape jelly and have to take it in his lunch at least three times a week, she might avoid these little episodes altogether.

“Nicholas Allen.” The hushed tones transformed, her words snapping with disapproval. She took a deep breath and peeled his sticky fingers from the receiver. “Mommy’s told you about this a million times, young man.”

Frustration oozed from every pore. She shook her index finger at him, taking in his mud-streaked Sponge Bog Square Pants T-shirt. He’d changed back into his dirty clothes from the day before, more than likely planning to head outback to dig more holes in her flowerbeds so he could find more worms.
Ugh. Little boys
. She would never understand their thought process.

There was so much she wanted to say, but the scolding would have to wait. Biting her bottom lip, she contemplated hanging up on the caller. It wasn’t like the person on the other end wasn’t used to the rude behavior.
Crap
. It was hopeless. Once contact was made, something inside her just wouldn’t let her do it.

“I’ll deal with you in a minute, little mister.” Makayla lifted the receiver to her ear, cringing at the gooey residue gushing between her fingers. Her sweet Nicholas was a handful to put it nicely. He loved disruption. Thrived on it. The more out of whack he kept her, the happier and smoother his life appeared to run. He knew all it took to get what he wanted was a bit of chaos. Then he’d sit back and watch as her composure crumbled beneath the pressure.

She shook her head. Overcompensating for past mistakes was destructive in so many ways.

Bracing herself, she said, “Hello?”

Nothing. The silence greeting her on the other end of the line took precedence over her son’s behavior as well as his sticky hands.

“Who is it, Mommy?” She felt the jelly seeping through the thin layer of her jogging pants as he tugged, but it barely registered. “Mommy, who is it?”

“Hello?” Holding up her free hand to stop her son’s questions, she scrunched her brow and strained to listen for a response over Nick’s relentless gibber and an annoying buzz she couldn’t quit place. That’s when the first uneasy feeling swept over her. She waited breathless, her tensed fingers throbbing with each heartbeat.

“Mommy! I said, I’m still hungry!” Waving Nick off, she backed into the bathroom and shut the door. “I can hear you breathing. I know you’re there. What do you want?”

This time a deep and much too familiar masculine laugh filtered through the silence. Her heart jolted.
No, it couldn’t be
. A rush of chills competed for the finish line as they sped down her neck, her back, and raced for her toes.

The gigantic wound in her soul reopened.

In an instant, her past flashed before her in all its vivid glory. She didn’t hesitate. Fingers numb, hands trembling, she poked at the buttons on the phone, trying to disconnect the call before he spoke again.

“Myka dear, you remember
me
.” The words came through crystal clear, even though she held the phone out in front of her. His tone confident, full of all the horrifying hatred she remembered oh so well, accomplished his task. He didn’t even bother to wait for an answer. The tone of the disconnection echoed in her ears and thundered in her brain.

Yes, she remembered
him
. The devil himself had found her. The nightmare she’d run from so many years ago had finally caught up with her, and she’d let it happen. He’d found them after all these years because she’d become lazy. Years that just seconds before she’d thought so insignificant.

Fumbling with the bathroom door, she flung it open, scanning the room for Nicholas. Her bedroom, now empty, haunted her aching soul. She swallowed hard and tried to push away the frightening thoughts swarming her all at once.

Calm down. Don’t jump to conclusions
. The odds were still in her favor. “Nicholas?”

“Nicholas, honey? Where are you?” Nicholas was only playing one of his hide and seek games. That’s all.

“Nicholas? Mommy doesn’t want to play right now.” Nothing but silence answered her desperate pleas and her heart felt as if it had lodged itself somewhere between a lung and a rib as she retrieved the gun from the drawer of the dresser by the bed. This couldn’t be happening. Not now. Please let this all be a misunderstanding.

Misunderstanding? Not hardly. She knew exactly what Steven would use to punish her this time. A picture of her oldest son flashed through her head. Michael had been about the same age as Nicholas when she’d run.

She moved through the bedroom, flicking off the gun’s safety before bending to peer under the bed. Nothing.

The seconds ticked off with the sound of the Grandfather clock in the dining room as she searched. The gun felt heavy in her hand and she gripped it tighter, being extra alert in case Nicholas popped out unexpectedly. The little stinker did this often, but two things worried her this time. How quiet he was being, especially after eating all that sugar. And the phone call.

She swallowed hard and felt the tight knot go all the way down. What if someone had figured out how to get inside undetected?

Reality hit with incredible force. She leaned against the wall for support. There was no way to explain how she knew Steven had found them. Her entire being just knew.

It felt strange to ask God for anything after she’d turned away from him so many years ago. But she also knew that God and God alone would be Nick’s only hope from here on out if he’d fallen into the hands of her oldest son’s real father. And if it took her falling to her knees to pray for his safety, to beg for her forgiveness in order to spare both her sons the life she’d been forced to endure, it was a done deal.

Makayla Prichard’s hands trembled as she stared down at the newspaper she’d picked up off the table in the small coffee shop of the Carson City Airport. She clutched it tightly, as if it might disappear before she got the chance to examine the photograph staring back at her.

The picture plastered on the front page belonged to her, along with the correct details of her physical attributes— dark brown hair, brown eyes, five-foot six. But the information printed below the photograph contained nothing but lies. Lies that everyone she knew might believe to be true.