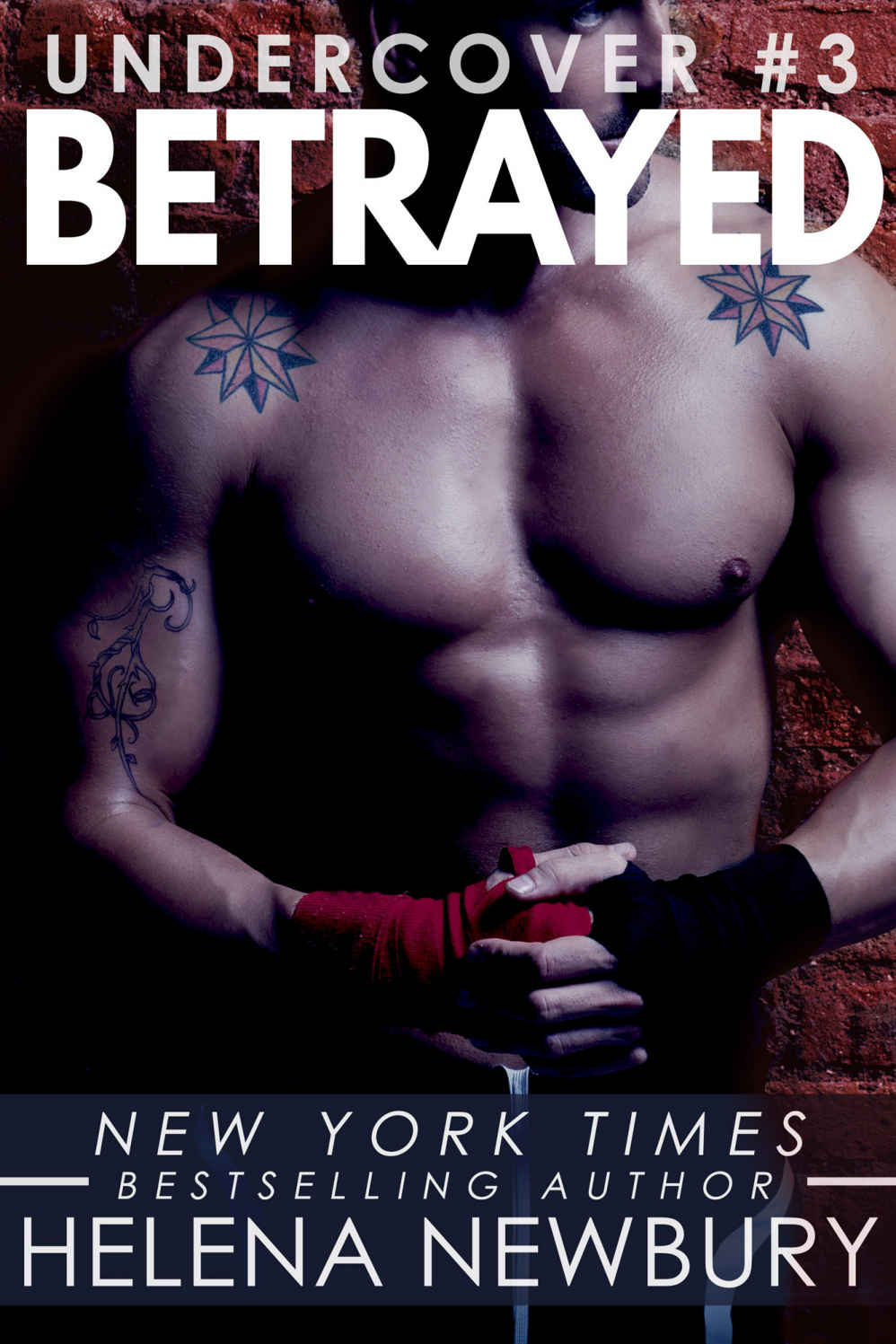 Join my newsletter and I’ll let you know when I release a new book so you can snap it up for 99c on launch day instead of paying full price. You’ll also get “
Losing My Balance
,” a free, exclusive novella.

The right of Helena Newbury to be identified as the author of this work has been asserted by her in accordance with the Copyright, Design and Patents Act 1988

This book contains adult scenes and is intended for readers 18+. The serial contains a scene that may be triggering for rape survivors.

Aubrey for the cover

And to all my readers :)

It was the most beautiful thing I’d ever seen: the human body as a moving work of art. The music swelled and ebbed as the ballerinas jumped and floated, weightless as ghosts.

And I couldn’t concentrate on any of it because of what Luka was doing under my skirt.

“Someone will see!” I told him in a harsh whisper.

He smirked, as if that amused him. His fingers pressed a little more insistently and I groaned under my breath. And parted my thighs.

We were in a private box. A box the Malakov family actually owned, that sat empty between performances no matter how full the theater was. Apparently, Luka’s dad, Vasiliy, used to take his mother here when she was alive. Now, it was used by Luka and his current girlfriend.

And now that was me. Not another willowy Russian model with laser-straight blonde hair, but a pale, awkward girl with hair you might charitably call chestnut and a body that was too heavy on the hips to be slender, but not curvy enough to catch a man’s eye.

Not most men’s, at least. Luka, for some reason, had claimed me for his own. And he was currently demonstrating his ownership by means of his hand between my thighs. The tips of his fingers were strumming up and down along the opening of my lips. I could feel myself moistening beneath my panties.

We’d been back in Moscow just one day. I was a gangster’s girlfriend. A
moll.
If it was even appropriate to call Luka a gangster.
Kingpin
suited him better, given that he was about to take control of most of the gun trade into the US.

I knew I needed to contact Adam—urgently. But when we landed in Moscow, we’d gone straight back to his penthouse apartment for more sex and then fallen asleep, tangled in the sheets. Today, we’d lounged around the place, never apart for more than a few minutes. I didn’t dare try to call Adam from the bathroom. If Luka overheard….

Then, this evening, he’d told me to dress up for the ballet. I was in one of the dresses I’d been given at the boutique, a long black number with a loose skirt and tiny beads of jet glistening blackly across the bodice. It was sexy but sophisticated and Luka had made approving noises when he saw it, and when he’d slid his hand into the high slit that run up one side of the skirt. But then he’d shaken his head. “It needs something else,” he told me.

And then he gave me the necklace.

It was made up of hundreds of squares of shining silver, joined at the edges to make a shimmering snakeskin pattern that flowed like liquid as it followed the shape of my neck. It was just a few squares wide at the sides and back, but flared out to eight wide at the front. He fastened the chain around my neck and I gazed at it in the mirror. It was starkly beautiful and clearly expensive without being showy. Miles away from the bling people associated with new-found Russian wealth. But then Luka and his dad had had more time to get used to it than a lot of people.

As I’d run my fingers over it, unease had coiled and twisted in my stomach. First clothes, now jewelry. I was being seduced by him. After the violence of the gun deal and the savage beating he’d given Ralavich’s son, now he was showing me the other side of his life. The one spent cruising in cars with tinted windows and in private jets. The one where we partied at the finest clubs in Moscow, or went to the ballet or the opera. The one where everyone feared us.

I’d felt it when we’d walked into the theater. People turned and looked and then pretended to be looking at someone else. Others scurried ahead of us to open doors or quickly stepped aside to clear a path. It felt like being a princess. An evil princess. One who could order you killed with a tilt of her head. I knew Luka would do it for me in a heartbeat—he had both the physical strength and the hardness in his soul. He had killed, plenty of times, and he’d do it again.

Unless I could stop him.

It was crazy. I’d been sent to Moscow to take down a monster and, instead, I was trying to tame him. As if that was even possible. As if I could give him back his soul—and, even if I could, as if that would make a difference to Adam. He was still going to demand that the Russians put Luka in jail for the rest of his life. Luka thought I was his salvation, but I was going to be his downfall.

And he was going to be mine. I could feel myself being drawn into a world I barely understood, one where my own lust ran out of control. Women are meant to be scared of men like Luka. I
was
still scared of him, on some level. And yet, at the same time, I wanted him to—

Hold me down as he—

I dug my fingernails into my palms to bring myself back. I’d never felt anything like it, before, this need to let him...
take
me. Whenever I thought about it, I flushed red and squirmed inside, ashamed of myself. And yet whenever he touched me, whenever he even looked at me in that way, I just went weak inside.

It was getting to be about more than sex, between us. I could feel the feelings deepening and branching, spreading out to every part of me and digging in deep. I knew he trusted me now, more than he ever had his previous girlfriends. He really liked me...maybe
more
than liked. And that
was even more dangerous than the physical side of it. I already felt as if I was being torn in two. What would happen when the time came to leave, to run out on him leaving some fake note apologizing for running away? What about when the police vans came for him a few hours or a few days later and he guessed it was me? It wasn’t the retribution I was worried about—I’d be safely back in Virginia, by then. It was the knowledge that he’d hate me for the rest of his life.

If I was smart, I’d distance myself as much as I possibly could. I’d keep the sex vanilla and try to remain passive, staring up at the ceiling and faking my orgasms. I’d remind myself of what he was and
act,
instead of going with my true feelings.

But I couldn’t do that. Being with Luka had woken things inside me, things that hadn’t functioned since the day of the crash. Things I thought were broken forever. I felt as if I was a statue made of ice, and he was made of flame. The closer I got, the more my frozen heart melted. But if I got too close, if I stayed too long, I’d melt completely and be lost forever.

Luka’s fingers began to move faster, stroking me through my panties. He’d used the slit at the side of my dress to gain access to me, pushing it up until the top of my stocking was showing and then sliding his arm over my thigh and between my legs. I could feel his dinner jacket and the cold silver of his cufflink against my inner thigh. As he stroked faster, I began to writhe on the padded seat, my ass tensing. “Stop!” I whispered. “Someone will see!”

I glanced around. The audience below us couldn’t see us, but there were other boxes to our left and right. My lower body was hidden by the wall that ran around the edge of the box, but I was exposed from the waist up. Every expression, every soft sigh was public.

Luka glanced at me with a look that I was getting to know well. A challenging look, one that meant
say ‘stop’ again if you really mean it....but you don’t, do you?
And I did the same thing I always did, faced with that look. I turned to warm taffy and then liquid inside and dropped my eyes.

He gave me one of his smirks and began to rub faster. I could feel my panties growing sticky and then wet. I couldn’t help myself. I began to circle my hips, grinding my pelvis to meet him. I bit my lower lip and tried to focus on the ballet, determined to maintain control. I couldn’t...not
here!

His fingers slid around the edge of my panties and touched naked, slippery flesh and I knew I was lost. I tried to sit bolt upright, eyes glued to the dancers. Watching as their partners lifted them high in the air and then dropped them down—

Mouth firmly closed, I panted through my nose as they—

Circled. Pirouetting around and around. Faster and faster and—

I felt my eyes widen as the orgasm thundered through me. My ass lifted off the seat and then pressed back into it, hard. My legs trembled, my heels hammering on the floor. In the box next to me, a man turned and frowned at me.

“Almost silent,” Luka whispered in my ear. “I’ll have to try harder, next time.”

On the way back to the apartment, I sat nestled against Luka’s side, my head on his shoulder. Being in a car, especially with the freezing weather outside, still unnerved me. But it no longer triggered me as it had done before I’d come to Moscow. There were no flashbacks.
Maybe I’m cured.

I dared to hope.

We were most of the way home when Luka’s cell phone rang. He looked at the screen and then turned from me slightly, maybe unconsciously, and spoke in a low voice I could only just hear. He didn’t know that I could understand Russian, so why was he going to such lengths?

Stay with Me by Paul Griffin
Nothing on Earth by Rachel Clark
Forest Born by Shannon Hale
Sektion 20 by Paul Dowswell
The Steam-Driven Boy by Sladek, John
Seduced 5 by Jones, P.A.
Beyond The Shadows by Brent Weeks
Two Old Women: An Alaska Legend of Betrayal, Courage and Survival by Wallis, Velma
Don't Look Twice by Andrew Gross
I May Be Wrong But I Doubt It by Charles Barkley