Read Betting on You Online 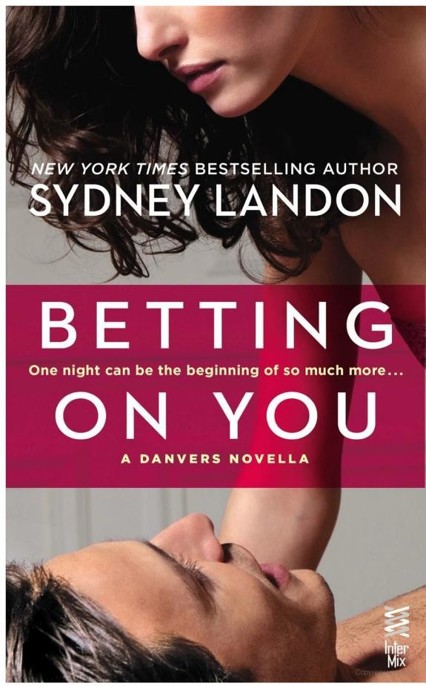 Not Planning on You

Excerpt from
Fighting For You
copyright © 2013 by Sydney Landon.

InterMix Books are published by The Berkley Publishing Group

Special Excerpt from
Fighting For You

This novella is dedicated to all of those who have taken the time from their busy lives to email me, or contact me on Facebook or Twitter. I cannot begin to tell you how humbled I am by your support of the Danvers series. Your love of the characters that I have created keeps me inspired. I thank you so very much for taking this ride with me. The future is unlimited as long as we have dreams and imagination.

Also, to my husband Tim, a man with the patience of a saint. He never asks me to justify my constant need for a new pair of shoes or a purse. He just gets me.

Seth Jackson sighed in resignation as he ended his conference call with the management team of the Oceanix Resorts. He swiveled his chair so that he was facing the wall of glass behind him. The Atlantic Ocean sparkled in the hot July sunshine as crowds of tourists lined the beaches below. Some days it was torture sitting in the office in a suit while looking down upon nothing but bikinis and swim trunks. That was one of the hard things about living and working in a resort town. Sometimes, or in his case, most of the time, work came first. Knowing it was pointless to delay; he spun his chair back to his desk and signed his name to the bottom of the contract from Danvers International. It wasn’t that he had a problem with the company itself, because they were the best there was in the communications field. But now whenever he thought of Danvers, he thought of Beth Denton and their last date together. That was probably one of the most surprising and awkward moments in his dating life.

His best friend, Brett, had been going through a rough time since his girlfriend had ended their long-term relationship. Brett was a relationship kind of guy and he was desperate to find someone new to fill the void that Becka’s departure had left behind. One night after multiple rounds of drinks, Seth had agreed to try out a local dating service with Brett. He really hadn’t intended to do anything other than pay his enrollment fee and go through the motions until Brett found someone. When he had run across Beth’s profile on the computer, he had been more than a little interested. She was beautiful and sounded like someone he would have a lot in common with. He had asked her out that same day and had been very impressed on their first date. They had gone out a few more times and had even progressed to some hot goodnight kisses before she had suddenly gone AWOL for a few months. When she finally returned his call and accepted another date, he had been excited and ready to move the relationship forward until the dinner discovery.

He had met Beth at Sara J’s, one of his favorite seafood restaurants in Garden City Beach, South Carolina. When she had walked in, he thought she looked different. He knew it was probably a bit crude, but she had the look of a woman well fucked. During their initial dates, she was always a tad reserved and obviously nervous, but on that night, she had seemed more confident in herself and her sexuality. He was pretty sure at that point what had been occupying her for the past few months, but maybe that was over since she had accepted his dinner invitation.

They had just settled at their table with the conversation flowing easily when a man had approached their table. It was obvious that he knew Beth. He suspected from their body language that they had been intimate. He had been surprised when the introductions were made. He had heard of Nick Merimon. Hell, Myrtle Beach was a small town where you either personally knew or knew of most everyone in the business circles. He had heard that Danvers International had merged with Mericom, which had been owned by the Merimon family. He knew Jason Danvers socially and had met Gray Merimon, Nick’s brother, on a few occasions. Nick’s reputation as a ladies’ man preceded him. Even though they both worked for Danvers, he wouldn’t have suspected a personal connection between Nick and Beth. They seemed to be complete opposites. He actually found himself feeling a little sorry for Beth. He was afraid that she had probably been seduced and dumped. He, of course, would be happy to swoop in and give her the support she needed to move on. He wasn’t looking for long-term so he was happy to be her rebound guy if needed.

He had barely had time to relish that thought when things had gone wildly off course. He had asked Beth how she knew Nick and she had said that they worked together. Nick had added that they lived together and that they were having a baby. He had actually been tempted to laugh at first, sure that this was some kind of bad attempt at humor on Nick’s part. When he took a closer look at Beth’s face though he had known it was true. What he didn’t know was why in the hell she had accepted a date with him. He wasn’t one to judge, but come on. How many pregnant women who clearly have some type of relationship with the father are actively dating through a dating service?

With Nick still standing at their table, he had left the restaurant at barely less than a run. He had been pissed. He had no idea if Nick and Beth had left together and he couldn’t have cared less at that point. He couldn’t help but feel like he had been some pawn in whatever game Beth was playing with Nick Merimon. To her credit, she had left a message on his voicemail the next day apologizing. He hadn’t returned her call. He had hoped never to have to think about her or that night again, but apparently that wasn’t in the cards. Soon Danvers International would be invading his turf, and he hadn’t wanted to explain the reason behind his opposition to his nosy family so he was screwed.

Only his close friends and family were aware that the Oceanix Resorts were owned by the Jackson family. There were ten beachfront resorts located in such hot spots as Mexico, Jamaica, Bermuda, Florida, the U. S. Virgin Islands, Charleston, and Turks and Caicos. Seth ran the Oceanix Resort in Myrtle Beach and his brothers, Rhett, Ash, Dylan, and Luke, ran resorts in Florida, Charleston, and St. Croix. His cousins rounded out the rest of the management of the Oceanix chain. Like their fathers before them, they each lived and breathed the business. They could have easily expanded, but they all believed that quality was better than quantity. Each location was booked for months in advance. It was rare that they had vacancies. The service they offered was impeccable and second to none. A stay at the resort was first-class all the way. They were a five-star resort and their staff was paid well to make sure there were never issues with customer satisfaction.

In the scheme of things, replacing the communications system at the resort was minor and not something he would usually be concerned with. It wasn’t as if Beth Denton or Nick Merimon were going to walk through the door as a part of the installation team from Danvers. This was business and arguing against a Danvers system would bring nothing but questions from his nosy family. They only purchased top of the line for the resort chain and that meant Danvers whether he liked it or not.

As if some sixth sense had alerted her, his assistant walked through the door as he was setting his pen down. He had no idea how she did that. He often wondered if she had his office under some type of surveillance. He smiled as Margie made her way to his desk. They had worked together for five years now and he would be lost without her, a fact that she pointed out to him at least five times a day. Even though he rolled his eyes, they both knew it was true. She was a wise-cracking, tough-love mother-figure and he adored her. She dressed like someone off a runway but complained endlessly about the high heels that she insisted on wearing daily. Her ink-black hair was cut short and had that perfectly mussed look that women paid a fortune for. He should know; he gave her carte blanche to the resort hair salon and she was a walking advertisement for the talent of the stylists. She was fit and trim and he had no idea how. She ate like a sailor and cursed like one at times.

His own mother, Charlotte, as she preferred to be called by her sons, lived in California with her second husband. He rarely saw her and that was something that they were both okay with. She had bonded with her husband’s children from his former marriage and she tended to act as if he and his brothers were just distant acquaintances unless she needed the services of one of the Oceanix Resorts.

The Life of Anna, Part 3: Embraced by Marissa Honeycutt
The Ghost Chronicles by Maureen Wood
In the Shadow of a Dream by Sharad Keskar
The Quest: Countdown to Armageddon: Book 6 by Darrell Maloney
Wilde for Her (A Wilde Security Novel) (Entangled Brazen) by Burrows, Tonya
The Fading by Christopher Ransom
A Dinner Of Herbs by Yelena Kopylova
Assignment - Mara Tirana by Edward S. Aarons
The Haunted Mask II by R. L. Stine
Stone Soldiers 1: Mythical by C. E. Martin