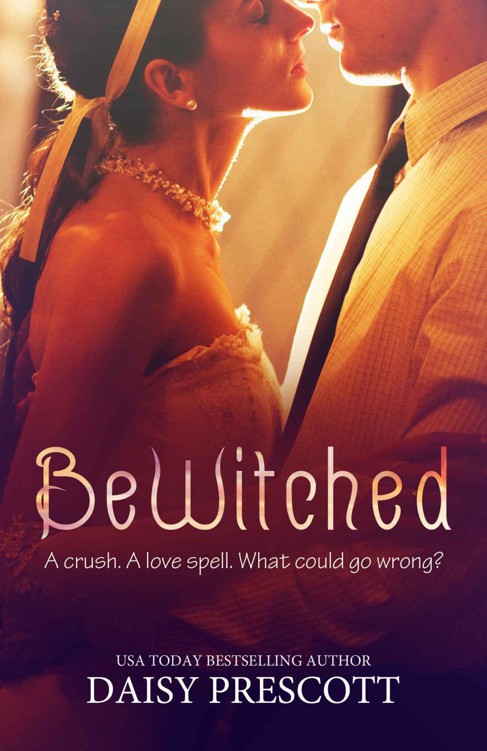 Confessions of a Reformed Tom Cat

Take the Cake
and Run

No part of this book may be reproduced or transmitted in any form without written permission from the publisher, except by a reviewer who may quote brief passages for review purposes.

Cover Design by
RE Creatives recreativesdesigns.wordpress.com

Edited by There for You Editing/Melissa Ringsted

Madison Bradbury isn’t interested in spells or magic, or anything hocus-pocus related despite descending from the original Salem witches. Her life as a Hawthorne College junior is boring. Perfectly so. That is until Andrew Wildes appears in her class—like a quiet, brooding hero straight from one of her favorite romances.

When a local witch convinces Madison to use a love spell on her crush, what happens next is more than magical.

A crush. A love spell. What can go wrong?

“Hester Pryne was a slut.”

“She was not. You’re a Neanderthal asshat!” My chair scrapes across the worn wood floor as I stand and shout. Yep. Shout. I am shouting in my New England Fiction seminar led by a man in a tweed jacket with elbow patches.
What is wrong with me?

“Miss Bradbury, please sit down,” Professor Philips scolds me from the head of the long, polished mahogany table.

I cross my arms and try to control my temper as I stare down the tree troll known as Luke Hamilton, aka self-proclaimed “Big Man on Campus” and golden-boy. “Professor Philips, how can you just let him spout off all that bull— nonsense about Hester Pryne being a slut? She didn’t take a religious vow or have sex with herself.”

“That’d be hot.” Hamilton snorts from a few seats away. His golden-boy blond hair droops over his forehead as he doodles boobs with A’s on them in the margins of his book.

Disgusting. I can’t figure out why he’s even in this class. Reading doesn’t seem to be his thing. The only things that appear to interest him are boobs, keg parties, and himself.

I continue my rant. “It takes two people. Two. Hamilton and his hand don’t count as two people. Argh!” I toss my pen down on my notepad. “He’s missing the point. Hawthorne wasn’t slut shaming Hester.” I flail my arms around in some sort of awkward orangutan mating dance.

A pen tapping at the opposite end of the long table draws my attention, and the spell of my frustration dissolves. The sound comes from Andrew Wildes, resident brooding, quiet, serious, handsome, slightly dangerous man of mystery. Or maybe he’s just quiet. There is something about him I find fascinating, like the dark hero in one of the Brontë sisters’ novels. Blushing, I sit down in my chair, straightening a stack of note cards and my post-it note filled copy of
The Scarlett Letter
. Dr. Phillips has banned laptops from the class, encouraging us to take handwritten notes because of some brain study he read about memory.

“Do you have something to add to the discussion, Mr. Wildes?” Dr. Philips asks focusing his attention on the other end of the table.

Andrew stares at his fingers, which tap on the table in a patch of dust dancing in the mid-September sun. The rest of him remains in the shadows, making his thick dark hair and pale skin stand out in contrast even more. His faded black T-shirt only adds to the brooding vibe surrounding him. He never speaks in class unless Dr. Philips calls on him, and his answers are often so odd, the majority of students ignore him. This should be interesting.

My mouth drops open. Andrew is defending me. He clarifies my entire argument in two sentences. I’ve assumed he doesn’t know I exist even though it’s only a class of twelve students.

“Well said, Andrew,” Philips praises him. “You and Miss Bradbury are on the right track with your thinking.”

Hamilton scoffs and leans back in his chair, letting the front legs rise a few inches above the floor. Under his breath he mutters, “Slut.”

Andrew’s head jerks in our direction. Behind his glasses, his brown eyes flash to mine before they settle on Luke’s smug expression.

I want to wipe the stupid frat-boy grin off Hamilton’s face. My fingers twitch as I concentrate on resisting the urge to hurl my book at him. For once I would love to see him fall flat on his smugness. I scrunch up my nose and narrow my eyes as I imagine him crashing to the floor. Clouds cover the sun, darkening the room’s only source of light. Luke’s chair tips further back, past the point of balance, but he doesn’t seem to notice until it’s too late. His arms flail, struggling to stop the inevitable. With a loud clatter, Luke and his chair smash to the floor.

“Ha!” I glance around to see who heard my outburst. Most of my classmates are failing to stifle their own laughter as everyone stares at the empty spot at the table where Luke had been sitting. My eyes once again meet Andrew’s. He dips his head and pushes his glasses up his nose with his long, slender finger, but his lips curl and a faint dimple creases his cheek.

“Ouch, I think I hurt my head.” Luke moans from the floor.

“Mr. Hamilton, remove yourself from the floor, please, so we can continue class.” Dr. Philips’ salty gray beard twitches with his annoyance.

Luke grumbles and exhales a few creative expletives as he regains his seat at the table. I bite the inside of my cheek to keep from giggling with glee.

Class continues with other students piping in with their thoughts on Puritans and sex. I zone out, remembering Luke’s fall and wondering if I’d wished it to happen hard enough to make it so. If I can make Luke fall over, what else could I do if I wish hard enough?

After all, we are in Salem. Accused witches were killed here, but today the streets are filled with shops selling magical potions, cauldrons, and books on Wicca to modern witches and tourists. Not that I believe in witches. Or magic. That’s all hocus-pocus and not real. I might love romantic heroes, but I know fiction when I see it. Even when everyone was waiting for their letter from Hogwarts, I knew without a doubt, I was a muggle.

Philips stands and gathers his things. “Next week we’ll be discussing
The Crucible
, Arthur Miller’s take on the witch trials that made Salem famous, or infamous as it were.”

I’ve really spaced and missed the rest of the class.

I shoot him a look. “Seriously?”

He meets my eyes, and a slow, sinister smile spreads across his beer bloated face.

“What are you smiling about?” I sneer.

“Prudes and bitches. This class could be about you.”

“Shut up, Hamilton.” I move around him toward the door.

I flip him my middle finger over my shoulder without turning around.

“Aww, don’t be Mad. Oh wait, I guess you don’t have a choice,” he calls after me, laughing at his stupid joke about my name.

I stomp down the hall. Outside of the glass doors, large raindrops splatter the brick walkway. “Could this day get any better?” I say out loud. Shouting in class and now I’m talking to the weather.

A pale hand with long, familiar fingers holds one of those tiny collapsible umbrellas in my line of sight. “Here.”

Not sure about the day getting better, but it seems it can get more awkward.

I glance up to meet the dark eyes of Andrew. His lanky frame towers over mine. From his black Chucks to his almost black hair, he could be a hipster, but he is too nerdy, too cool, too something, to be trendy. Maybe it’s the glasses; the thick black rims are not exactly stylish. His messy hair hints at a lack of combing rather than bedroom shenanigans. He looks smart, if intelligence had a facial expression. Too-smart-for-his-own-good smart.

Andrew clears his throat. I’m staring at him. Definitely more awkward. I fumble with something clever to say.

“Oh, thanks. I have my hoodie.” I reach behind my head to pull my gray hood over my hair to prove it. “I’ll be fine.”

“Okay.” He holds my gaze as he stuffs the umbrella into his backpack. “No problem.”

He doesn’t say anything more. I decide to keep my mouth quiet so I won’t be more embarrassed by my awkwardness. Beyond that, something about him makes me tingle. He unsettles me, and I’m not sure if that is a good thing or not. I hesitate before I give him a small smile, and dash out the door.

The rain sputters into a mist a few yards down the path, and I tug down my hood. Maybe my day has started to turn around. Smiling, I search for Andrew in the doorway or on the steps behind me, but he’s disappeared.

Inside the campus cafe, Sam sits at our usual table. Today, her long blond hair is woven into two braids, which wrap around the crown of her head. She looks like a milkmaid with the figure of a German beer garden girl. She’s the blonde yin to my dark yang. The tall to my short. The fun to my serious. The nutty peanut butter to my sweet jam.

“I bought your favorite pumpkin spice latte.” She points at a steaming white cup on the table in front of my chair.

I inhale the steam from my cup. “Thanks. I need this.” The rainy day calls for the warmth of fall in a cup. I shake out my damp hoodie and run my fingers through my newly bobbed hair.

“Rough day with the Puritans?” she asks.

“He’s a flaming toadstool.” Sam never uses typical curse words, but the intent is the same.

“What did newt brain do now?”

I explain his comments in class and we laugh over the karma of his fall.

“Maybe it wasn’t karma. You wished for him to shut up and it came true.”

I give her a sidelong glance. “Sam.”

“I’m not a witch. No magical powers.” I wiggle my fingers in front of her face.

“My ancestors might have been from Salem, but we all know those witches weren’t witches.”

“Maybe not the innocents who were killed, but that doesn’t mean magic doesn’t exist here.”

I roll my eyes. “I think you’ve spent too much time downtown at the tourist shops.”