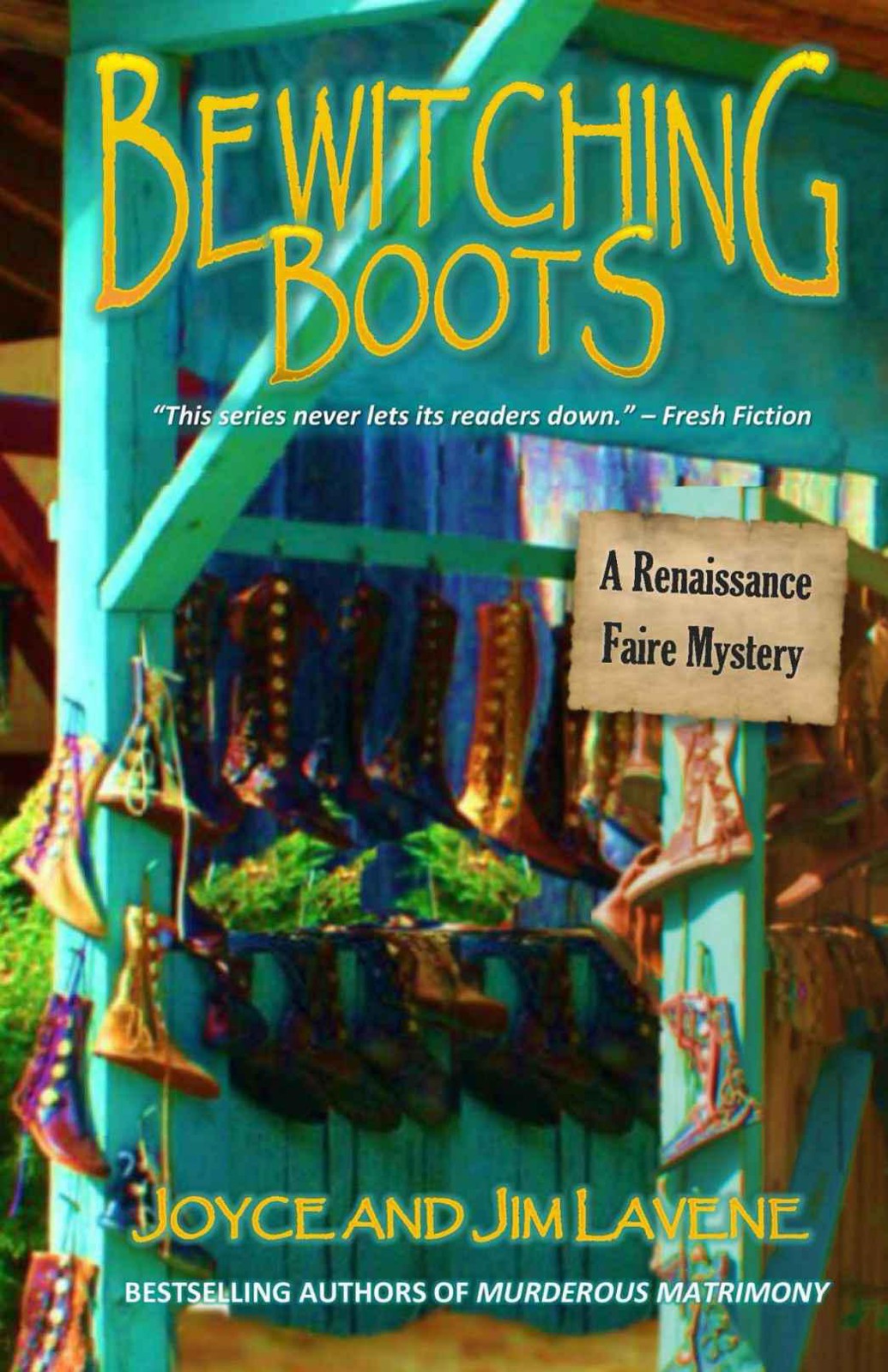 No part of this book may be reproduced, scanned, or distributed in any printed or electronic form without permission.

Please do not participate in or encourage piracy of copyrighted materials in violation of the authors’ rights.

Other books in this series

A tall, older gentleman with a red cap called out the time and announcements as he walked through the Village carrying a wood staff with a lantern at the top. “Princess Isabelle approaches. All ye look upon her and tremble.”

The voice of the crier was as excited by the news as I was. It wasn’t bad enough that the royalty of Renaissance Faire Village and Marketplace couldn’t walk the cobblestones without their retinues. They had to formally announce their presence too.

“She’s beautiful!” Bill Warren stood beside me, gazing out the window of the Art and Craft Museum. “Who is
she
?”

I sighed at the awe in his tone. No wonder royalty had people announce who they were.

“That’s Princess Isabelle.” I watched her saunter toward us with ladies in fine, pastel summer gowns attending her, jugglers amusing her, and gorgeous young men doting on her. “She’s the older princess at the castle. She’s not
actually
the daughter of the king and queen like Princess Pea is. She’s an actress, like a lot of other people around here.”

Bill still held a piece of soft leather in his big hands. He was a shoemaker who’d recently opened a stall at the Village. He was in his fifties, a burly man with graying blond hair and peculiar pointed ears. I’d noticed his ears the first time we’d met when he doffed his feathered hat to me.

“I don’t know who Princess Pea is,” he continued, “but if she looks anything like Princess Isabelle, she’s a wonder. What do you know about her?”

What could I say that wouldn’t sound like sour grapes? Could I say that Isabelle used her beauty and power to cause trouble and torment people? That she ruined people’s lives with her annoying habits of breaking hearts?

She was guilty on both counts. But mostly, I just didn’t like her. She still flirted with Chase, my husband of almost a year, still trying to come between us. She was the bane of most women’s lives in the Village. She didn’t care who she hurt as long as she got her way.

“No. Don’t tell me about her.” Bill pulled back from the window. “Let me find out about her, as I would a fine wine.”

First of all—
gaggin
g. Second, she wouldn’t give him a glance much less enough time to find out something personal about her.

I didn’t want to tell him that. He was new here. He’d find out eventually what she was all about.

We went back to setting up his exhibit in the museum. He’d brought dozens of pairs of boots, slippers, and moccasins with him. His craftsmanship and attention to detail was exquisite.

When I’d found him making boots on a trip to Tennessee, I immediately recruited him for the Village. I’d offered him, as the museum director, a guest spot at the museum as a way to introduce him. I hoped that he’d choose to stay with us. The Village lacked an old-fashioned cobbler.

I couldn’t believe the laughs the word
cobbler
got me as I suggested the man to the king and queen. They had final say-so over new shops and artisans coming into the Village. It seemed the food form of cobbler had overtaken its original meaning as a person who cobbles shoes.

King Harold and Queen Olivia were still thrilled with the idea of having Bill there. They suggested calling him a shoemaker rather than a cobbler so as not to be confusing with pie.

I didn’t bother again to explain the difference, even between pie and fruit cobbler. Let them think what they would.

“You were right about this place, Jessie.” Bill set out his tools and materials on a large table. “I’ve already sold more boots in a week than I did in a month back home. Plus there are all the perks of living here. I rode an elephant three times yesterday. That will never get old.”

“I’m sorry your shop wasn’t ready when you got here. They say it should be finished by the time your exhibit is over.” Most of the artisans and craft people in the Village lived in similar small houses with pointy roofs. Their homes were upstairs and shops on the ground floor.

“Not a problem. The stall is fine for now. I love your name for the shop by the way—
Bewitching Boots
.” He glanced at me with one thick brow lifted. “It’s more apt than you know.”

I sorted through the soft boots to decide how best to display them. I’d already put hooks in the walls for some, but others I thought should lay out where people could see and touch them. “Yes? How’s that?”

“My family has always been shoemakers. The Brother’s Grimm wrote about us in their stories.”

I stopped sorting. “What did they write?”

He kept working, setting up his table and equipment. His black britches and loose-fitting white linen shirt were well made and entirely appropriate. The boots he wore were an example of his wonderful work. They were black, slightly higher than his knee, with large, brass buckles on the sides.

“We were featured prominently in the story about the elves and the shoemaker. That was my great-great-great grandfather. There was some question about whether or not he took an elf as a wife. Either way, magic enhanced his career after that. We’ve been blessed with magic since then.”

That didn’t really surprise me. I lived and worked in a reproduction of a Renaissance village, and for the last year, we’d experienced some strange happenings. It had all started at the time of Wanda’s death. She had become our resident ghost.

“We have a few witches here too. Not to mention our ghost.”

He laughed. “I’ve seen her. She’s one crazy female.”

“Sure. Having a lineage of magic allows me to see things that other people might not be able to see.”

“I wish I could give up that opportunity. Wanda has been a pain in the butt since she died. Not that she was any better when she was alive. Just that she gets around more now. I used to have to visit her. Now she finds me.”

“She says she was murdered right here in the Village.”

How much should I say about that terrible event? I didn’t want to scare him off. “It’s true. There was an
unfortunate
set of circumstances that caused her death. That kind of thing doesn’t happen on a regular basis, though. No need to worry.”

“I never worry about anything bad happening to me, Jessie. My magic keeps bad things away. That’s how I’m able to put such good thoughts and happy feelings into my creations.”

Magic was getting to be a commonplace thing here at the Village. Did he really have magic? I wasn’t sure and didn’t want to pursue it. I was still adjusting to the magic I knew was real.

“I guess that’s why I’ve enjoyed the sandals you made for me.” I lifted my long, red skirt a little so he could see them on my feet. “They’re attractive, and very comfortable. It’s not often you can find a size twelve sandal that fits so well.”

Yes. I have large feet. But considering I’m also six feet tall—I need them to balance me.

“And don’t you feel
extra
good while you’re wearing them?” he asked.

I thought about it, not sure what he was looking for. “Yes. They’re my favorites.”

“I’ll bet you get around faster in them too, without your feet hurting.”

“
Sure
.” I didn’t know if that was true or not. I hadn’t really noticed. But if he believed in what he was doing, who was I to disagree?

The door to the museum was flung open, letting in all the hot, humid air. It was summer in Myrtle Beach, South Carolina—home of Renaissance Faire Village. I’d finally managed to convince the maintenance people to put in some ceiling fans. At least in the mornings, the temperature stayed mild.

Air conditioning was out of the question, like cell phones, computers, and other modern devices. Except at the castle. It was blessedly cool there in the summer. Some of the resident housing had air conditioning too, but most only had fans.

“Here ye, hear ye.” The man who was acting as Isabelle’s presenter for the day began his announcements. “The beautiful and excellent Princess Isabelle cometh.”

He shrugged. “That’s what she said.”

Isabelle came inside with her giggling ladies-in-waiting. She held her head high, her long black hair dressed with artificial pearls for the day. They matched her pearl-colored gown and reticule. She was tiny—petite—I think they call it.

One of the ladies carried a parasol to protect the princess from the sun. Another brought along two hand-painted fans to cool her fevered brow. Still another carried perfume and other necessities to protect Isabelle’s delicate nose. They all stood to the side, heads bowed, as the princess walked past them.

“How now, shoemaker?” Isabelle’s tone was frosty enough to cool the entire Village. “I have come to view your wares. Show me your best, and quickly! I have no time to dawdle.”

A handsome redheaded gentleman with bright green eyes and a tiny red beard found a chair for her. “You may approach the princess now, shopkeeper.”

Bill, for all his bulk, made a graceful bow to the princess. He took her hand in his and delicately kissed her fingertips. “Princess Isabelle. You honor me with your presence.”

“I know.” She shook her hand after taking it back from him and glanced away. The redheaded gentleman immediately brought out a stoneware jar of hand sanitizer. “I’m looking for a pair of slippers.”

“Dancing slippers, I’ll wager.” Bill smiled at her as though she really was a royal princess.

Some people get lost in the act.

That was actually more than I’d expected Isabelle to say to him. Maybe he was right about having magic.

Bill brought out a small, crudely made wood stool that he placed close to her feet. “May I examine your present slippers, Your Highness, as well as your beautiful feet?”

Isabelle actually
smiled
. I had to assume she was mellowing in her approaching third decade. Maybe she was actively trying to get people to like her. There was a rumor that Princess Pea could replace her when she was old enough. Isabelle still had time to make friends. Pea was only a baby.

“Off with you, shoemaker.” The red-haired gentleman nudged Bill hard. “No one touches the princess without her express permission.”

He had to be Isabelle’s new boy-toy. I could have warned him that she didn’t appreciate men who tried to usurp her authority. There was no prince in her life, and I was pretty sure she liked it that way.

“Be gone, Sir Dwayne.” Isabelle banished him with a wave of her delicate white hand. “I am able to speak for myself.”