Read Beyond the Shroud Online 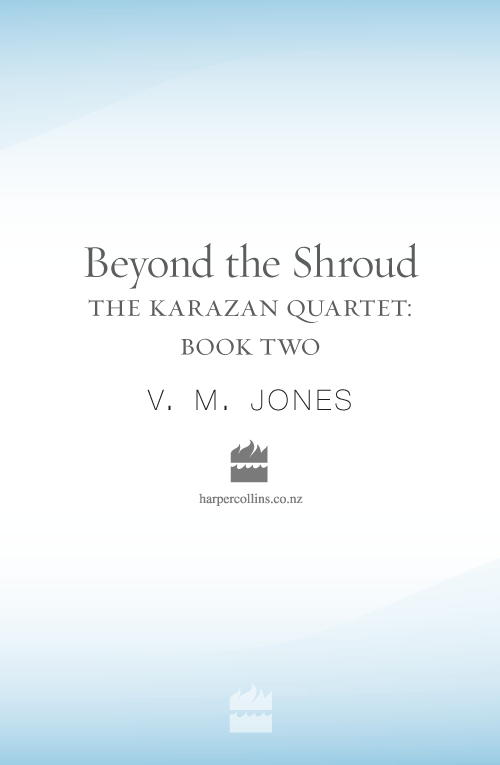 To Tiger Lily, my companion and inspiration,
with me on the journey every step of the way.

In the dead of the night

Rustles in the dark

âWho drinks of me â¦'

The edge of the shroud

The grace of the Mauler

A ray of light

Prisoner in the dark

The Way of the Dead

The Bridge of Sighs

The door between two worlds

The little cream cat crouched in the warm sunshine, her golden eyes fixed unblinkingly on the bare stone floor in front of her. She was absolutely still except for the very tip of her tail, which gave an occasional twitch.

Suddenly, as if in response to some signal only she could hear, she sat up, blinked, yawned and stretched luxuriously. She looked round the circular chamber, almost as if she was looking for something, or someone; but it was empty and utterly silent.

She trotted purposefully over to a doorway in the curved wall. It gave on to a steep stairway, leading upwards. She hopped nimbly up the steps until she reached the top. It was almost dark here, but in the dim light even a human could have made out the blank wall: a wall with no suggestion of a doorway, or an opening of any kind.

To the little cat, it was light as day. Delicately, she put out one velvet paw and patted the wall. She stretched up, in much the same way as she might have reached up a tree
trunk to sharpen her claws, and scratched at the stone with both front paws.

Then she sat down, very tidily, with her tail curled neatly round her, and looked up at the wall, unblinkingly, her eyes very wide and dark â¦ almost as if she was waiting for something, or someone.

At last, her mouth opened in a little
mew
. It wasn't a loud miaow; it had never needed to be. It was followed by another; then another, more insistent.

Without warning, an explosion of sound crashed through the stone like a battering ram, sending her streaking back down the steps, every hair of her body on end, her tail like a bottlebrush. In the room below, she pressed herself into the deepest shadow, heart hammering like a tiny drum, every sense raw.

Gradually, the echoes died away.

But something about the little cat was different. It was as if the barrage of sound had stripped away her tameness â¦ as if some deep instinct had warned her that somehow â between the silence that went before and the echoing emptiness that came after â everything had changed.

Slowly the sleek fur between her shoulder blades began to rise. She sensed it long before any human could have, ears straining to catch the tiniest whisper of sound, whiskers sensitive as radar, tuned to detect the faintest tremble of air. She could hear them clearly now. Voices below â¦ and footsteps. Coming closer.

More clearly than the voices â more distinctly than the footsteps â the little cat could sense something else. A greyness; a shadow; an eclipse of light, like darkness falling over the face of the sun. The wild instincts of her ancestors knew it instantly, in a chilling second of recognition.

Evil.
It swelled up from below like a tide. Adrenaline surged through her blood. Her pupils dilated. In absolute
silence, she crept away from it, her terror of the gong forgotten. Softly as a shadow she drifted back to the doorway and melted up the stairs.

She reached the top. The dead end. Her heightened senses told her instantly there was nothing for her beyond the wall â not now. She turned her back to it and waited in the darkness, eyes gleaming: a wildcat at bay.

Night blanketed the city like soft velvet, unbroken by the sound of cars or the barking of dogs, by electric lights or the cosy murmur of television sets behind curtained windows. The only light came from the stars.

It was that time of night when sleep is deepest and daybreak seems most distant. The little loft above the stable was warm and snug. The uneven pane of glass over the single small window was thick enough to keep out the chill of pre-dawn; the heavy wooden door held in the warmth that rose through the floor from the slumbering beasts below.

On the low pallet in the corner of the room the boy muttered in his sleep and rolled onto his back. His rough brown hair was damp and tousled from a night of disturbed, fragmented dreams, a cow's lick standing up at a comical angle. Something glinted in his curled fist â something smooth and metallic-looking, gleaming red as blood in the darkness.

A light sheen of sweat filmed his skin. His eyelids flickered. He tossed and moaned, then muttered again, a single word:
friends
, perhaps, or
fiends
. But there was no one to hear him. Not yet.

Outside, a shadow separated itself from the deeper shadow of the stable wall and drifted to the foot of the rough stairway leading to the attic door. It was joined by another, and another. No words passed between them. The only sound was the faintest sniffing of an indrawn breath, questing, seeking â¦ catching with a rattling snuffle on something loose or rotten deep within the dark hood.

The leader reached the attic door â a sturdy door studded with rusty rivets. On the inside, where the boy lay sleeping, a stout bar rested on heavy brackets. The door was latched â¦ from the inside.

What had once been two hands emerged from the folds of the cloak and groped their way across the pitted surface of the door. At last they felt what they were seeking, and were still. Long moments passed.

On the other side, in the darkness, the heavy latch twitched. Slowly, it lifted and the door swung open. There was the faintest hiss as the hands pulled away, leaving fragments of rotten skin on the rough wood.

The three dark shapes loomed over the bed, their shadows falling on the sleeping boy. His next breath breathed them in: the sweet, cloying odour of the open grave. His blood turned to ice and his heart froze, lurching in his chest like a stone. His eyes flew open. He flung up his bare arms in an instinctive attempt to shield himself; his mouth opened like a dark wound in one single, hopeless cry. Then the boy's eyes rolled back in their sockets, his head lolling uselessly against the bolster. His face was grey as death.

The three shadows melted together over the bed; groped; snuffled. The faintest gurgle; then they floated back to the open doorway and were gone.

The bed was empty.

Somewhere far away, a rooster crowed.

Somewhere far away, a rooster crowed.

The four poster bed floated like an island on a sea of golden light, drifting towards morning on a tide of dreams. The little girl stirred and smiled in her sleep. One arm, thin and fragile under her pyjama sleeve, reached blindly for something â¦ but all it found was the emptiness of the cotton sheets.

The man in the armchair beside the bed bent down and picked up a battered, one-eyed teddy from the floor. Gently, taking care not to wake her, he placed the teddy within easy reach. He considered, then repositioned it closer still, to rest against her hand.

The faintest dimple dented the pale cheek. The hand groped; the arm curled round the teddy and pulled it close. The cheek snuggled against it, the hand stroking the nubbly, threadbare fur. The stroking stopped abruptly. The man watched intently, as he had watched all night, pain and love etched on his face.

The little girl's eyes opened and flew straight to the teddy. A curiously adult expression settled over her face. Her voice, when she spoke, was the thread of a whisper. âOh, Teddy â it's you.'

Her eyes moved to the man. She reached out a hand.

âOpen the curtains, Q. I want to see the morning.'

Obediently, he crossed to the bay window and drew the curtains wide. Rose-coloured light flooded the room. The sky was streaked with indigo and copper, magenta and gold, and the child's face was lit with a rosy glow. Her eyes feasted on the lustrous sky, and for a moment her thin face reflected its radiance. She sighed, and scrunched
down again into the pillows. The teddy lay on the rumpled sheet beside her, forlorn and forgotten.

The man crossed to the bed and took her hand. âHow does breakfast sound, sweetheart? Nanny could make you a boiled egg, perhaps â¦ with soldiers. Would you like that?'

Her eyes, shadowed and sunken from gazing so closely into the face of death, looked beyond his words into his heart. The words that neither could speak hung between them like a sword. Her lip trembled. âQ â¦'

Instantly, he was beside her on the bed, cradling her frail body in his arms. âSweetheart â don't think about it now â you need to rest, to gather your strength â¦'

Her eyes burnt into him, anguished, remorseless. âQ â
I need to know
.'

He looked down. Then, with a colossal effort of will, he told her. âShe didn't come home, Chatterbot. She's still there â in Karazan.'

âNo, not dead. She stayed with them, almost to the very end. She was brave â she was a hero. Adam will tell you later, if you feel strong enough. But then, at the very end, they were â¦ separated. There was no way Adam could get to her. The children came home â they had to. There was no other way.'

He bent his head close to hear her. âWhere â¦ where was she?'

âYes, there are priests.'

âDo you think one of them will find her? And take care of her?'

âPerhaps, Chatterbot. Yes, I'm sure they will.' He couldn't meet her eyes. âDon't worry about her. I'm sure she'll be safe. And maybe â¦ maybe one day soon, when you're
better â¦ we'll go and choose you a little kitten â not to take her place â no one could ever do that, I know â but to â¦ well, to fill the space. Maybe. What do you think?'

She tilted her head and looked her father full in the face. Though she was only five, she read all that was written there with an accuracy that sent a bolt like an arrow into her heart. Her face didn't change, but tears filled her eyes, brimmed over, and rolled slowly in twin tracks down her thin cheeks.

Her lips moved, but no sound came out. âMaybe.'