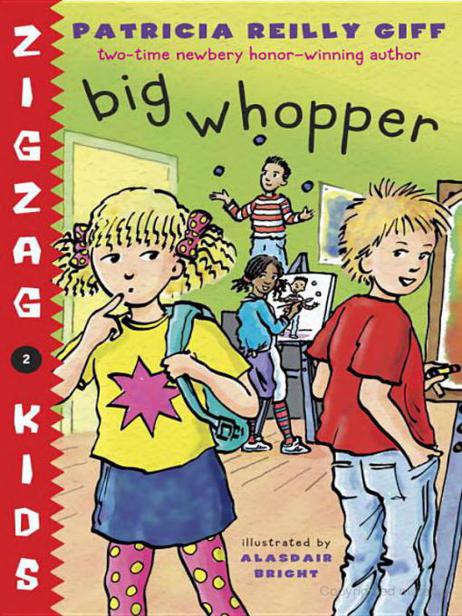 Love to my favorite consultant,

For B and John

The Kids of the Zelda A. Zigzag School

E
veryone—kindergarten through sixth—stamped down the stairs. Destiny stamped, too.

It was time for the Afternoon Center at the Zelda A. Zigzag School.

Destiny Washington opened her mouth. “Hellooooo!” she called in her loudest voice.

It was a test. She really wasn’t calling anyone. Except maybe her new friend Mitchell McCabe.

The test was to see if anyone could hear her.

The other kids were screaming, too. No one turned around. No one but Terrible Thomas.

Terrible Thomas was Jake the Sweeper’s cat. He liked to sneak into the school. He ate the snacks that Jake’s broom missed.

He liked to hiss, too.

The Afternoon Center took up most of the school’s basement. It was a great place. The art room was down there. So was the lunchroom.

Destiny loved everything about the Center.
Dancing, and plays, art, and snack. She loved bouncing on the trampoline.

Gina raced along in front of Destiny. Her loopy pearl necklace swung back and forth. “Don’t push!” she yelled. Her voice sounded like a jet plane.

Not only was she loud! She was bossy, too.

Suddenly, a whistle blew. It was the screechiest noise Destiny had ever heard.

Destiny leaned over Gina’s shoulder. What was going on?

Mrs. Farelli, the art teacher, stood at the bottom of the stairs. Her cheeks were as red as her whistle.

One of her arms was raised.
She looked like the Statue of Liberty. “Is this a herd of cattle?” she asked.

Destiny followed Gina into the lunchroom. Snack time was first.

Everything about the lunchroom was huge. Even the flowerpots on the windowsills.

Too bad the pots were full of dirt instead of flowers! They’d planted a bunch of seeds ages ago. But not one of them had popped up.

Destiny slung her backpack onto an empty lunch table.

Uh-oh
, Destiny thought. They were in trouble.

Mrs. Farelli leaned forward. “Afternoon Center boys and girls don’t stampede down the stairs. They don’t push each other.”

Destiny made herself as small as she could. Did Mrs. Farelli mean her?

That was definitely Habib
, Destiny thought.

He ducked in back of Mitchell McCabe.

Mrs. Farelli could probably see him anyway. She said she could see through walls.

“Be kind,” Mrs. Farelli said. “That’s the way we do things at the Afternoon Center.”

“That’s me,” Gina said. She looped her fingers around her pearls. “Kind!”

Something exciting was always happening at the Afternoon Center. Destiny tried to hear.

Habib was juggling with one apple.

Trevor, one of the kindergarten kids, was reading a book upside down. He was making up the words.

His friend Clifton was listening. He was making up words, too.

“This is Discovery Week,” Mrs. Farelli said, when everyone stopped holding their ears.