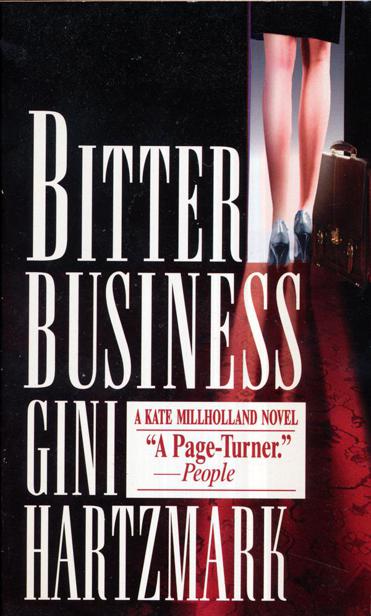 GiniHartzmark and her lawyer heroine, Kate Millholland, take us on another expertly guided tour through the world of the rich and the superrich. It’s like
Dallas
except that Hartzmark’s people aren’t cartoons.”

—-JEROME DOOLITTLE Author of
Half Nelson

“Hartzmark is an excellent writer.... She’s especially good at catching the vibrations of tension which encircle complex business dealings.”

“A refreshing protagonist... Hartzmark brings into play a fascinating behind-the-scenes look [at] the inner workings of an unusual manufacturing company.”

“When it comes to the legal thriller, Gini Hartzmark s work is top of the line. BITTER BUSINESS is fine, strong stuff; begin reading it on a quiet weekend because you wont want to stop.”

Books published by The Ballantine Publishing Group are available at quantity discounts on bulk purchases for premium, educational, fundraising, and special sales use. For details, please call 1-800-733-3000.

Sale of this book without a front cover may be unauthorized. If this book is coverless, it may have been reported to the publisher as “unsold or destroyed” and neither the author nor the publisher may have received payment for it.

All rights reserved under International and Pan-American Copyright Conventions. Published in the United States by Ballantine Books, a division of Random House, Inc., New York, and simultaneously in Canada by Random House of Canada Limited, Toronto.

I would like to thank Leon Danco for sharing his insight into the special alchemy of family businesses and Heather Raaf, M.D., for her encouragement and willingness to answer my questions about forensic pathology, no matter how ridiculous. My apologies to them both if I’ve twisted their facts to fit my fiction. Many thanks to Jerry Stovall and Chip Humes of Arizona Plating and Anodizing Co. I’d also like to thank Linda Unger, Esther Goldenberg, and Elizabeth Gardner for their assistance. And, as always, Michael.

Sometimes an author encounters a name so difficult to resist that she must use it in a book. Thanks to the real Joe Blades for graciously allowing me to borrow his.

If Daniel Babbage hadn’t been dying of cancer, I would never have met the Cavanaughs. Looking back, that much at least seems certain, even if there are other things—important things—that I will never know and never understand. Babbage was notoriously secretive about his clients, and I have no doubt that under other circumstances he would have chosen to deal with the Cavanaugh family alone. For close to thirty years Daniel’s job had been as much about keeping secrets as providing counsel, and if nothing else, the years had taught him that there will always be some things that are best kept locked away.

But now the cells in Babbage’s pancreas had betrayed him and the touchstones of his faith had become the radiation and chemotherapy treatments that took him from the office for long stretches and left him weak and exhausted. Finding themselves in his situation, other men, no doubt, would have abandoned the practice of law and used whatever time they had left to pursue their long-deferred dreams. But Babbage was a quirky and reclusive bachelor, and for whatever reason, he had decided to play out the last dramas of his life within the mahogany-paneled confines of Callahan, Ross, Peterman and Seidel.

And so, after the initial shock of diagnosis, Daniel had begun to make arrangements. He ordered the famous octagonal conference table removed from his office and replaced it with a deep sofa of tobacco-colored leather. Gradually, he relinquished his administrative duties at the firm, including his seat on the powerful compensation committee, which sets salaries and allocates profits among the partners. Finally, and with the greatest reluctance—like a stripper working a very cold hall—he’d begun to assign his files, one by one, to other attorneys at the firm.

I made the trip down the hall to Daniel’s office in answer to his summons and found him lying on the couch, propped up on pillows. Madeline, his longtime secretary—a stern woman who wore her glasses on a chain—hovered nearby. Daniel was reading a case file, holding the manila folder in front of his face like a choirboy. When he heard me enter he peered over the top of it, tilting his chin down to see me better above the half frames of his reading glasses. He was a small man, just this side of sixty, with a head of candy-tuft white hair and an affably jowly grin. His eyebrows were thick and licked up into pointy tufts above his eyes, which were moist like a baby’s.

“Kate!” he exclaimed, laying down the file and making a token effort to sit up. “Thanks for making yourself available on such short notice. I understand that the services of our youngest partner are very much in demand these days. Skip Tillman was crowing about you over lunch just the other day. He said it was you who rammed the Norwich Industries deal through. You should have heard him.”

Skip Tillman was the firm’s managing partner, and from the first day I’d come to work at Callahan Ross he’d never expected me to do anything but fall on my face— an opinion that he’d also taken no pains to conceal. It was strange, but I felt no flutter of victory to hear that he was now singing my praises.

“So who’s doing what to whom?” I inquired, settling comfortably into the chair Daniel reserved for visitors. Babbage’s specialty was representing family-owned businesses, and as he was fond of pointing out, in his work the same themes were always playing themselves out-—love and hate, money and power, trust and betrayal, fear...

“You did some work for me two years ago on the Superior Plating file,” he said. “What do you remember about the company? Anything?”

I took a deep breath and ratcheted back through my mental inventory of cases.

“Superior Plating and Specialty Chemicals,” I recited easily. “The company is a large metal plating and anodizing operation located on the near south side. It was founded in 1936 by James Cavanaugh, who died young and turned it over to his only child, Jack, who built it into one of the biggest operations of its kind in the country. Their main business is applying metal coatings like chrome, gold, and brass to manufactured metal products—everything from shower doors to streetlights.” I closed my eyes and cast my mind back. “If memory serves, they also have an unusual sideline for a plating company— a division that makes proprietary compounds for niche industries like film processing and embalming, hence the name Superior Plating and Specialty Chemicals. Unless things have changed, it is wholly owned and operated by the Cavanaugh family—Jack Cavanaugh is the company’s CEO and there are a bunch of middle-aged children in management.”

“That’s very good”—Babbage chuckled—“especially for someone who only billed six hours to the file.”

“I think you had me looking into the possibility of a two-for-one stock split,” I replied. “I can’t remember why they didn’t pursue it.”

“Is the father still around?” I inquired. “I only met him once, but I remember him being tough as nails.”

“If you think that Jack’s tough, you should have met his father. Now,
he
was quite a character. I think that’s how we politely refer to bastards once they’re safely dead. They say that in his day James Cavanaugh drank more whiskey, screwed more women, and smoked more cheap cigars than any other son of a bitch in Chicago.”

“I wouldn’t be so quick to turn up my nose if I were you, Ms. Millholland,” Babbage admonished. “You’d probably have to go back a few generations, but you’d find a couple of your ancestors who were no better than James Cavanaugh and one or two who were a damned sight worse.”

Daniel was right about my family, of course, but he was wrong in thinking I was looking down on the Cavanaughs. It seemed, however, pointless to go into it.

Sometimes I forgot how protective Babbage could be of his clients.

“Hasn’t Jack Cavanaugh retired by now?” I asked. “I remember he seemed to be getting to that age....”

“He’ll be seventy this summer, but believe me, the only way he’ll be leaving Superior Plating is feet first.”

“Come on, Daniel,” I protested. “I thought that frogmarching these old guys into retirement was one of your specialties.”

“This one I’m leaving for you, Kate. Jack Cavanaugh and I go too far back—he was my first client. He hired me when I was straight out of law school. Now I realize he picked me because I was the cheapest lawyer he could find, but at the time landing him as a client was quite a coup. In my mind Jack was a bona fide industrialist. It didn’t matter that he’d just inherited a run-down factory, a payroll full of his father’s drunken cronies, and a balance sheet that was bleeding red. To me, he was a captain of industry. Since those days Jack and I have been through a lot of things together—baptisms and funerals, foreclosures and Christmas dinner. I’m even his son Eugene’s godfather....”

“I’d think that would make talking to him about stepping down easier.”

“You might think so, but it doesn’t. You have to understand that for a man like Jack Cavanaugh retirement is just another word for euthanasia.”

“Do any of his children have what it takes to succeed him?”

“Yes. But not the one who Jack’s been grooming to take over.”

“I see,” I replied, pulling out a legal pad to take notes. “Philip’s the oldest and the heir apparent. When Jack turned sixty-five he made Philip president of the company and gave him the day-to-day running of the business—on paper anyway.”

“In practice, Philip has the title but no authority. Everyone knows that Jack is still calling the shots. He lets Philip build his card houses and whenever it suits him he strolls over and knocks them down.”

“So what does Philip do about it?”

“Nothing. That’s the problem. Now, Philip’s sister Dagny is another story. She doesn’t take one ounce of shit from her father, and as a result he doesn’t give her any.”

“What does Dagny do at Superior Plating?”

“And you think she’s the one who should take over for Jack.”

“It’s completely obvious to everyone but Jack. But even if he did figure it out, he’d never do it.”

“Because feminist progress and just plain common sense aside, men of Jack’s generation don’t pass over a son in favor of a daughter.”

I thought that one over for a minute.

“Do any of the other children fulfill the anatomical requirements for top management?” I inquired.