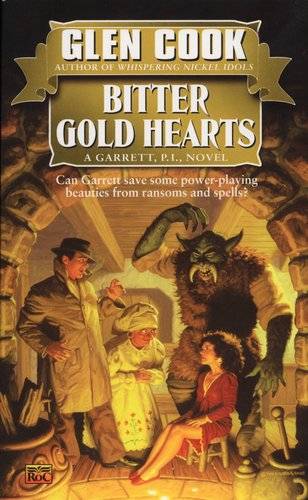 OGRE TOWN WAS QUIET AS DEATH —

Until we sprang our attack on the citadel of the human plug-ugly nicknamed Gorgeous. This cold-blooded killer’s pack of ogres had been wiping out some people I’d had a personal interest in keeping alive.

Right from the start the battle seemed to be going just the way we’d planned. Then Gorgeous let loose with a roar that could wake the undead. I jumped him, but the damage was done. The stairs were already drumming to stamping feet. And then the ogre stampede arrived!

There must have been twenty in the first rush. They pushed across the room, into the far wall. Even my trolls, hammering ogre heads from above, scarcely slowed them. And more and more ogres kept coming.

It was looking really grim for my little army as Gorgeous shrieked hysterical, bloodthirsty orders. It was definitely time to try something desperate....

A ROC Book published by New American Library, and the Penguin Group

If you purchased this book without a cover you should be aware that this book is stolen property. It was reported as “unsold and destroyed: to the publisher and neither the author nor the publisher has received any payment for this “stripped book.”

There was nothing to do after I wrapped up the Case of the Perilous Pixies. Two weeks of living with the Dead Man’s grumblings and mutterings would try the patience of a saint. A saint I’m not.

Worse, Tinnie was out of town indefinitely and the redhead refused to share me with anyone she didn’t know. It was a trying time to be alive. Nothing to do with my evenings but keep the breweries from going into receivership.

It was early and a devil was doing some blacksmithing in my skull, so I wasn’t at my best when somebody came pounding on the door of our battered old house on Macunado Street.

“Yeah?” I snapped when I yanked the door open. It didn’t matter that the woman was wearing a thousand marks’ worth of custom cloth or that the street was filled with guys in flashy livery. I’ve seen too much of the rich to be impressed.

“That’s me.” I lightened up a little. I’d had a chance to give her the up and down, and she was worth a second look. And a third and a fourth. There wasn’t a lot of her, though nothing was missing, and what was there had been put together quite nicely. A phantom smile crossed her lips as my gaze drew north again.” I’m half fairy,” she said, and for a moment music broke through the gravity of her voice. “Can you stop gaping long enough to let me in?”

“Of course. Can I ask your name? I don’t recall you being on my appointment calendar. Though I’d love to jot you in as often as you want.”

“I’m here on business, Mr. Garrett. Save that for your bar girls.” She pushed past me a few steps, then stopped and glanced back with mild surprise.” The outside is camouflage,” I told her. “We leave it looking like a dump so we don’t strain the honesty of our neighbors.” It wasn’t the best section of the city. There was a war on, and it was hot, so there were plenty of jobs available, but some of our neighbors hadn’t yet given in to the silly notion of personal gain through honest employment.

“We?”
she repeated icily. “I wanted to consult with you on a matter that requires the greatest discretion.”

Don’t they all? They wouldn’t come to me if they thought they could solve their problems through the usual channels.

“You can trust him,” I replied, nodding toward the other room. “His lips are sealed. He’s been dead for four hundred years.”

I watched her face go through a series of changes. “He’s Loghyr? The Dead Man?”

So she wasn’t such a lady after all. Anybody who knows the Dead Man has roots solidly anchored in the downhill end of TunFaire. “Yes. I think he ought to hear it.”

I get around and hear a lot of things — some of them true, most of them not. I’d recognized the livery of the Stormwarden Raver Styx outside and thought I could guess what was eating her. It would be fun springing her on the heap of moth-eaten blubber who had become my permanent houseguest.

I started toward his room. The routine is for me to wake him when I have a business caller. Not everyone who visits is friendly. He can provide powerful backup when the mood hits him. “What did you say your name was, miss?”

I was fishing and she knew it. She could have skipped right around it, but she hesitated in an odd way before confessing, “Amiranda Crest, Mr. Garrett. This is a criti­cal matter.”

“They always are, Amiranda. I’ll be with you in a minute.”

She didn’t walk out.

It was important enough that she would let herself be pushed.

He was indulging himself in what had become his fa­vorite pastime, trying to outguess the generals and war­lords in the Cantard. No matter that the information he got was scanty, out of date, and mostly filtered through me. He did as well as the geniuses who commanded the armies — better than most of those Stormwarden’s and war­lords whose main claim to the right of command was heredity.

He was a mountain of rigid yellow flesh sprawled on a massive wooden chair. The works had been moved sev­eral times but the flesh hadn’t twitched since somebody stuck a knife in it four hundred years ago. He was getting a little ragged. Loghyr flesh doesn’t corrupt quickly, but mice and whole species of insects consider it a delicacy.

The wall facing his chair had no doors or windows. He’d had an artist paint it with a large-scale map of the war zone. At that moment he had hosts of bugs trooping up and down the plaster landscape, recreating recent campaigns, trying to discover how the mercenary Glory Mooncalled had evaded not only the Venageti out to destroy him, but our own commanders, who wanted to catch and leash him before his string of triumphs made them look more foolish and inept than they already did.

“Who’s winning? The ants or the roaches? Better watch out for those spiders down in the corner. They’re sneak­ing up on your silverfish.”

“I have a visitor, a prospective client. We need a client. I want you to hear her outpouring of woe.”

You brought a woman into my house again? Garrett, my good nature has limits wider than the ocean, but it does have limits.

“Whose house? Do we have to go back to talking about who’s the landlord and who’s the squatter?”

The bugs scattered. Some of them jumped on others. That’s life in the war zone.

/
almost had the pattern.

“He does it with mirrors. If there was a pattern, the Venageti War Council would have spotted it months ago. Finding Glory Mooncalled isn’t a hobby for them. It’s life or death.” The mercenary was picking them off one by one. He had an old score to settle.

I take it this one is not that redheaded witch of yours?

“Tinnie? No. This one works for the Stormwarden Raver Styx. She has fairy blood. You’ll love her at first sight.”

Unlike you, who loves them all at first sight, I am no longer the victim of my flesh, Garrett. There are some advantages to being dead. One gains the ability to reason....

I’d heard this before — several dozen times. “I’ll bring her in.” I stepped out, returned to the front room. “Miss Crest? If you’ll come with me?”

She glowered. Even angry she was a gem, but there was a quiet desperation in her stance that gave me all the handle I needed. “Amiranda, haunter of my dreams. Please?”

She followed me. I think she knew she had no choice.

Amiranda crest started shaking when she saw the Dead Man. I’m used to him and tend to forget the impact he has on those who never have seen a dead Loghyr. Her cute little nose wrinkled. She whispered, “It smells in here.”

Well, yes, it did, but not much, and I was used to that, too. 1 ignored the remark. “This is Amiranda Crest, who comes to us from the Stormwarden Raver Styx.”

Please pardon me for not rising, Miss Crest. I am capable of mental prodigies, but self-levitation is not among them.
Meantime, Amiranda blurted, “Oh, no. Not from the Stormwarden. She’s in the Cantard. Her secretary, the Domina Willa Dount, sent me. I’m her assistant. She wants you to see her about something she wants you to do, Mr. Garrett. For the family. Discreetly.”

“Then you’re not going to tell me what it is?”

“I don’t know what it is. I was told to give you a hundred marks, gold, and tell you there is a thousand more if you’ll do the job. But the hundred is yours if you’ll just come and see her.”

She lies, Garrett. She knows what it is about.

He wasn’t paying the rent with that. She had changed strategies while I was alerting the Dead Man. “That’s all? Nothing to tell me why I’m sticking my neck out?”

She had begun counting ten-mark gold pieces into her left hand. I was startled. I’d never met anyone with fairy blood who was right-handed.” Save yourself the trouble, Miss Crest. If that’s it, I’ll stay here and help my friend hustle cockroaches.”

Platero y yo by Juan Ramón Jiménez
Breathless by Bonnie Edwards
Trading Reality by Michael Ridpath
In the Wolf's Mouth by Adam Foulds
Don't Call Me Hero by Eliza Lentzski
Darned if You Do by Monica Ferris
Gentleman's Guide 01 - His Impetuous Debutante by Jane Charles
A Wedding in Apple Grove by C. H. Admirand
The Unincorporated Future by Dani Kollin, Eytan Kollin
Stealing Faces by Michael Prescott