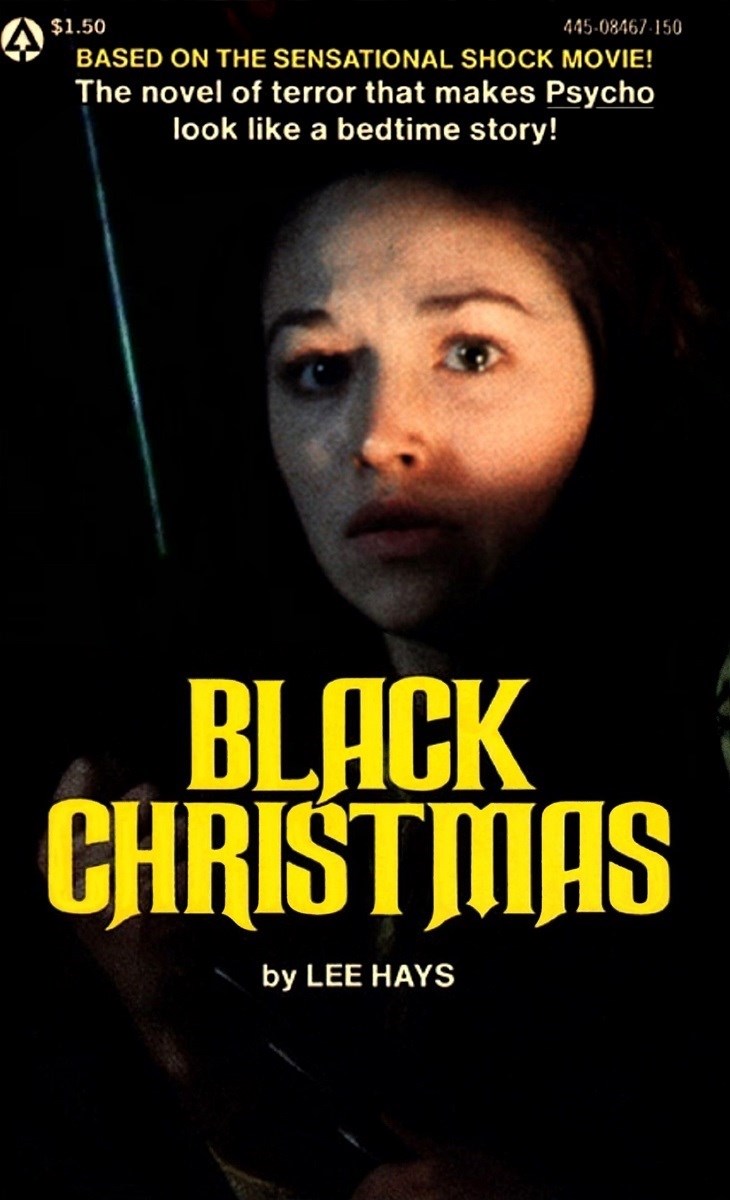 FIRST CAME THE BLOOD-CHILLING MOANING ON THE PHONE . . .

The girl listened as if hypnotized to the low wailing sound, like that of a wounded animal, and felt her flesh creep at the insane sexuality she heard in it.

Then came the strange voices, weird and revolting.

What was left of a beautiful girl was gift-wrapped in a plastic bag. The body of a woman swung like a decoration from the ceiling. The torn flesh of another female victim bled bright red as holly berries.

And below in the decaying old mansion a terrified young woman waited for the grotesque voice on the telephone that would tell her she was about to join the others in this hideous holiday of unholy evil . . .

It was a gentle snow that was falling on and around the large Victorian mansion located on the spacious grounds of what had once been the property of the richest man in town. It had been snowing intermittently for several days and there was no question but that the people of the town where the mansion was located would have a white Christmas. The snow seemed almost to keep time with the young voices somewhere in the distance finishing the last refrain of “Silent Night.”

The house had, of course, seen better days, inside and out. The family that had owned it had provided fresh paint each year and inside the walls, chandeliers, furniture and rugs had been immaculate, fashionable and even faintly suggestive of ostentation. Now, though, all had gone slightly to seed. Gabled and turreted, with chipped paint and dying bushes, if seen during the day (and without the patina of snow) it was slightly ominous and more than a little shabby.

Still, on this particular night, a warm glow came from several of the windows upstairs and down. When the front door opened the sound of youthful voices wafted into the cold air bringing a hint of the good cheer of the yuletide season that blanketed the town as well as this particular house, not unlike the snow that continued to fall ever so softly.

Through the open door several people made their separate ways to cars parked on the street beyond the house calling out a cheery “good-night” or “thank you” to their hosts inside.

From the other direction, moving toward the house, a girl hurried up the street, exchanging greetings with those who were leaving, then continued up the front walk and into the house. The door closed behind her; the last car pulled away and outside the mansion that was now a sorority house all was silent. Almost all.

All in there. Most of them. Smirking. I can’t get my breath. Why don’t they let me alone? It wasn’t my fault. I didn’t do that. Yes, you did. Nasty, nasty. It’s cold. I should wear a coat. It’s so quiet I can hear my footsteps in the snow. Crunch, crunch, crunch. They can’t hear me, though. Because they’re all talking, laughing. I can see them. Having a good time. Smirking. It wasn’t like she said. Dirty. Nasty.

The young girl who moved across the living room was the one who had just gone in the front door. Her cheeks were flushed from the cold, her brisk walk home and from the drink she had just poured for herself at the makeshift bar in the corner beyond the Christmas tree which stood in such a way that the man outside peering in could not be seen by those inside.

As she finished her drink and began to pour another, Barbara Pollard, a not unattractive twenty-one-year-old with a deep, abiding sense of inferiority which she hid rather unsuccessfully behind a mask of derisive humor said, “You’re a bunch of shitheads! Period. No, exclamation point. I don’t really resent it exactly but I should like to remind one and all that I, little old Barb herself, was the only one over there working tonight. While the rest of you were—singing hymns?”

Turning to Phyllis Thompson and Pat Cornell who were cuddled in a corner of the couch, Barbara asked, “And where were you? Patrick? Phyl?”

Phyllis replied, “We were there this afternoon, Barb. Honest.”

“Uh-huh. A snow man, too. Has anyone ever told you that you’re oversexed?”

“Only Phyllis. But she doesn’t complain.”

“Now that I have finished decorating it, their house looks yule-ish, very yule-ish.” She took a sip from her glass and then said to Patrick, “You got your outfit?”

“Picked it up today. The jolly red giant is ready to strike again. What time do the little bastards arrive tomorrow afternoon?”

The telephone rang as Barbara answered, “I’m told around one o’clock. They’re taking them to lunch first. Dessert will be served at the frat house.” The phone rang a second time as she swigged down the last of her second drink, put the glass down saying, “Ah, yes! Yes, indeedy. I’m coming, dammit.”

Before she could get there Jessica Bradley, another of the girls who lived in the house came into the room and said quietly, “It’s for you, Barb.”

“Thanks. One of my many admirers, no doubt.”

“I think it’s you he’s after, Jess. You being the beautiful one. He wouldn’t bother with Phyl.”

“Why not?” Phyllis called from across the room. “I resent that.”

Barb laughed. “Because he knows you’re worn out from Patrick.”

As she left the room she stuck her tongue out at Phyllis.

Why are they laughing at me? I didn’t mean to. Where did she go? I wish I could hear them. It must be warm inside. Maybe if I went to another window. No, I’ll go back up there . . . and wait. I’ve got to talk to one of them. I can’t help it. I have to. Don’t they know how hard it is? It isn’t right for them to be so happy. I didn’t do what she said. Nasty. Nasty. Easy, now. Quiet. It’s warm up there, but I have to be quiet.

Bright moonlight came through the dirt-encrusted windows of the attic, casting grotesque shadows across forgotten treasures, discarded and useless furniture, trunks, suitcases, a rocking horse, a dollhouse and a number of half-broken dolls. In one corner was a mattress, mildewed, stained, musty but giving evidence of use for there were rags on top of it obviously used for warmth, and a pan with some half-eaten and half-rotted food sat beside it. It was not an untypical attic yet there was something more about it, something that could only be described as sickeningly evil, a mute testimony that whoever was living there was somehow depraved.

The voices from below were in stark contrast to the cast of the room. The trap door was lifted and the sounds became clearer.

Barbara Pollard was holding the telephone in her hand about to take it and its long extension cord into the hall where she would be able to hear better. “Hey!” she called, “keep it down, will you? I can’t hear a damn thing. If it’s a proposal—or even a proposition—I want to be in a position to know what I’m agreeing to.”

She could not be seen from the attic but by coming down the stairs onto the second floor one could look down to the first and the hallway where she was holding the telephone close to her ear.

“Yes, Mother, I can hear you now. What? Oh, just a little Christmas party. Some of the kids. We invited some friends over. Actually I wasn’t here. I was working, getting the stuff ready for tomorrow for the little number we do for the deserving poor. I told you about it last time. Yes, I’ve had a couple . . . Oh, come on, Mother. I am definitely not drunk. For Crissakes, yes, I
have
been smoking a little. This isn’t a convent.”

As her mother rambled on Barbara sighed and took another large swig from the glass she had brought in with her.

Finally, when she heard a pause she said, “Yes, I remember my asthma, Mother. With you around, how could I ever forget it?”

Looking into the mirror over the hall table she made a face. Then she pushed her hair back and pulled at the skin around her eyes, ran her tongue over her lips before moving away so that she could check out her figure. This was followed by another swallow from the glass, then a respite from the voice on the other end. Quickly she said, “Yeah, like I told you I have to do something tomorrow afternoon and then I’m taking the seven twenty train to the city.”

I hate the telephone. It frightens me when I pick it up. I want to see people when I talk to them, but I’m afraid. Asthma. She said she has asthma. Maybe that’s what . . . Her hair is beautiful. Too bad she’s . . . She shouldn’t talk that way to her mother. Nasty, nasty.

“What, Mother! Oh, come on, you’ve got to be kidding, well, why couldn’t I come with you? Who? Who the hell is
he?
A new one? Oh, Christ, Mother! You’re a real gold-plated whore, you know that! Rude! I was trying to be a bit more than rude, Mother. Well, when is he coming? I mean, when is he appearing? Jesus, what a merry Christmas!”

The front door opened and Clare Harrison came into the hall with a well-built, athletic-looking young man. Clare called past Barbara to the others in the living room, “Hi! I’m back.” She turned to the young man and said, “Good-night, Chris. I’ll miss you.”

“You, too. Call before you come. I’ll have to get my parents used to the idea.” She kissed him lightly on the lips, watched him out the door, nodded to Barbara who was still listening to her mother’s involved explanations over the telephone, then went into the living room.