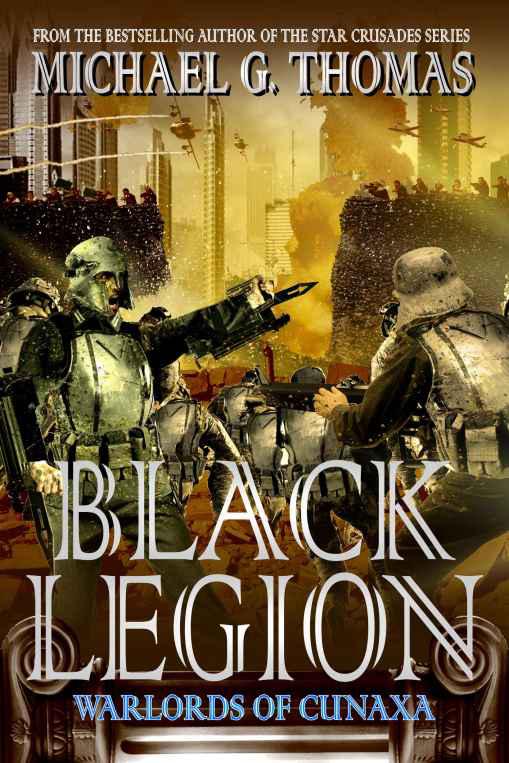 PART of the
BLACK LEGION SAGA

This is a work of fiction. Names, characters, places, brands, media, and incidents are either the product of the author's imagination or are used fictitiously.
The author acknowledges the trademarked status and trademark owners of various products referenced in this work of fiction, which have been used without permission. The publication/use of these trademarks is not authorized, associated with, or sponsored by the trademark owners.

The Black Legion series combines my background in computing, ancient history and European martial arts with the famous story of Xenophon and the Ten thousand mercenaries. I wanted to create a rich and exciting story inspired by the political machinations of Heinlein and the military plot of
The Anabasis
. Though others have used ancient tales as the basis for some great science-fiction novels, I believe this is the first time the story has been simply transplanted into a fictional futuristic setting, without altering totally from the original. I have retained the locations, races and characters as much as possible while adding additional elements that I hope add to the story. You do not need to know the story of Xenophon but if you do, then you are sure to enjoy the twists and turns that are inspired from the struggles of those tired and desperate Ten Thousand soldiers.

The or
iginal adventure was detailed by the Greek professional soldier and writer Xenophon himself in his great work titled
The Anabasis
. The story is one of the great adventures in human history and shows man at his best and worst. We meet strange people; and find new customs while watching the arguments and infighting amongst the Greeks themselves. I can truly recommend the original text, which is available freely in English translation. There are of course many changes to the main story, but I have endeavoured to stay as close to the original as possible and include many of the great events that took place. All the key players are there including Xenophon, Clearchus, Tissaphernes, Artaxerxes, and of course, Cyrus. There are many news words for the reader to get through, and I have added a handy glossary at the end of the book to help with the most common. The military terms and designations are a combination of Ancient Greek and Byzantine, and I have tried to avoid using our modern equivalents, such as generals and platoons. I appreciate that many will not have come across the terms
strategos, dekarchos, dukas
or
spatharii,
but by the end you will be an expert, and I hope you find it helps immerse you into the story and the great adventure that was the
Anabasis
.

Strategos Clearchus, the supreme military commander of the Black Legion surveyed his prize with barely concealed pleasure. Few Terrans had even seen a Medes warship before, and even fewer had seen such a monstrous beast as the Rashnu. His eyes scanned through the interior of the Royal Chamber, and though he could appreciate its engineering and artistic merit, he could see little that would appeal to a warrior like him. The more he examined her interior, the more the ship reminded him of why he felt so little empathy towards the Medes.

These people think they know something of war. They are nothing but slave drivers.

The battleship
Rashnu was the largest and most powerful ship in the entire Imperial Fleet
, and named after the ancient Medes’ divine angel. She was supposed to stand for justice and last judgement in the Empire;
more heavily armoured and shielded than even an Elamite battleship and filled to the brim with hardened warriors, each and every one of them sworn to give their life for that of the Emperor himself. The ship was so vast that to the Terrans she was classed as a super-battleship, a type of vessel second only to the twelve planet-sponsored Titans of humanity. Unlike the drab ships of the Terrans, this flagship was brightly coloured to an almost garish degree. She was designed to get the attention of all that came across her, friend or foe,
and that had been exactly what had happened to her in the bloody space battle at the Imperial shipyards of Khorram.

“Present arms!” called out one of Lord Cyrus’ personal guards in heavily accented English. It was a polite gesture on behalf of Cyrus to his trusted Terran warriors. The line
of newly named Anusiya fighters lifted their rifles high to the air. Cyrus had adopted the name of the Royal Bodyguard in the last week as part of his official naming as Emperor of the Median Empire.

Nothing but hot words from a politician with deep pockets,
he thought.

Though Cyrus was indeed the half-brother of Artaxerxes, he was most certainly not the rightful leader of the Empire. Not that any of it truly mattered to the Terran commander
; he was a mercenary like every other soldier, pirate and cutthroat in the Legion. The Emperor of the Median Empire would be chosen simply by whichever of the two men was left alive, and it was his job to ensure that Lord Cyrus came out as the true victor.

The stomping of soldiers’ feet caught his attention, and he
watched with wry amusement as the Medes soldiers paraded back and forth in front of Lord Cyrus. They were pretty that he couldn’t deny, but it was hard for him to disguise his contempt for the men who considered themselves the equals of the Terran warriors.
He was sure he could see equal contempt in their eyes for the vulgar, scruffy and brutal Terrans, but that merely improved his mood even further.

Clearchus was never alone, and this was especially true when in the presence of the Medes. Though he was t
he leader of the
vast
military operation,
he still had many enemies in the Medes military. Some had been turned against him only recently, but for the rest it was hundreds of years of enmity between two very different peoples. As always on such occasions, he was
flanked by his two trusted topoteretes, the common word used to designate his deputy commanders.
They were the equivalent of generals or admirals in most military forces and like all Terran senior commanders; they were expected to do both jobs.
On his left, the mighty warrior Kleandridas and on his right the cunning tactician, Pleistoanax. All three stood in their full military regalia with body armour and crimson cloaks, marking them out as the warrior elite of Laconian society.

Of
all
the
disparate
Terrans
peoples
, the Laconia
n
s were known as the first among warriors, and Clearchus was their greatest living commander.
No sane Terran strategos would ever send his ground troops into battle against a Laconian strategos. The man that sent his soldiers to face Laconian troops under the command of a Laconian strategos was doubly the fool, and the Medes knew this full well from their futile attempts to subdue the Terran worlds in the past.

“They still haven’t removed the stench from this place,” muttered Kleandridas.

Pleistoanax grinned at his insult, but Clearchus maintained his famous stoicism by saying nothing.
Instead, he lifted his eyes to examine the Royal Quarters of the mighty Medes warship. Rashnu had been the flagship of the Imperial Fleet and commanded personally by Emperor Artaxerxes at the previous battle of Khorram. Though powerful when in battle against other ships, she was vulnerable like all vessels to being boarded. The Terran had shot and hacked their way inside and taken her as a prize. Although heavily damaged, Clearchus had offered her to Cyrus as a gift. It was a useful gesture and had done much to further the Medes nobleman’s position with his people. Of course, to Clearchus it was a hulk, a piece of scrap that he might just use for target practice.

So, this part of the ship is to be accessed by only those of Royal blood? I must be a king then!
He thought.

He grinned to himself at the simple conceit. Back on Laconia he had been second only to the kings in power and prestige. Unfortunately for him, this had meant sending him away as often as possible to keep him out of internal politics. That part he didn’t mind, but it had resulted in his exile, following a number of unfortunate incidents under his command. He looked at the ground and was instantly reminded of the fighting in this very place. A great deal of Medes blood had been spilled in this very room, and it pleased him to be stood there observing more of them trying to impress him. Lord Cyrus spotted his interest and moved from his position at the end of the room towards Clearchus. It was only a short distance, but everyone other than the marching soldiers watched with interest. The lithe and elegant figure approached the Strategos and nodded. Clearchus did the same. The difference between them was marked. Cyrus, the taller and paler of the two with beautifully intricate robes and flowing regalia; Clearchus, the squatter figure with thick sinewy muscles, and ceremonial armour that followed the curves of his body and the blood red cloak of the Laconians. One looked kingly, the other like a muscled warrior god of antiquity.

“Strategos, my friend. How do you find this display?”

Clearchus smiled back at him.

“As always, your soldiers put on a fine display of marching.”

Cyrus detected the sarcasm but decided to not act on it. He knew perfectly well that he could never change Clearchus’ opinion of his own people. Of all the Terrans, the Laconians were the least likely to ever see the good in the Medes. The two were as far apart as it was possible for them to be. Cyrus lifted his left hand to add something but was interrupted by the opening of the great doors to this part of the ship. They were massive, and easily large enough to move a ship through. At the base of the mighty doors emerged the form of Ariaeus, the Median general and second in command to Lord Cyrus. He marched into the Royal Chamber with ten attendant Medes at his flanks. Cyrus watched his approach, but Clearchus turned his attention back to the parading soldiers. He showed nothing but contempt for the Medes commander as he stopped in front of the small group. With an extravagant flourish, he bowed down in front of Cyrus.

“My Lord Emperor,” he said so that Clearchus might hear and understand.

The old Terran commander did the unexpected and turned to face him. He nodded at Ariaeus as if the bowing had been specifically for him. Ariaeus snarled at him.

“Clearchus, why are you here?”

Cyrus inhaled before speaking in a firm tone.

“Lord Ariaeus, I am glad to see you have finally arrived for the demonstration.”

Clearchus looked at them both with a mixture of bemusement and interest.

“Of course, my Lord Emperor. I have brought my finest for your pleasure.”

He turned to his ten attendants and lifted his hand. They quickly formed up into two lines of five to face Cyrus. With another flick of his hand, they dropped to one knee and rested their rifle butts on the ground. Clearchus looked at them carefully, noting the thin but beautifully crafted helmets, fine clothes and selection of daggers and blades on their flanks.