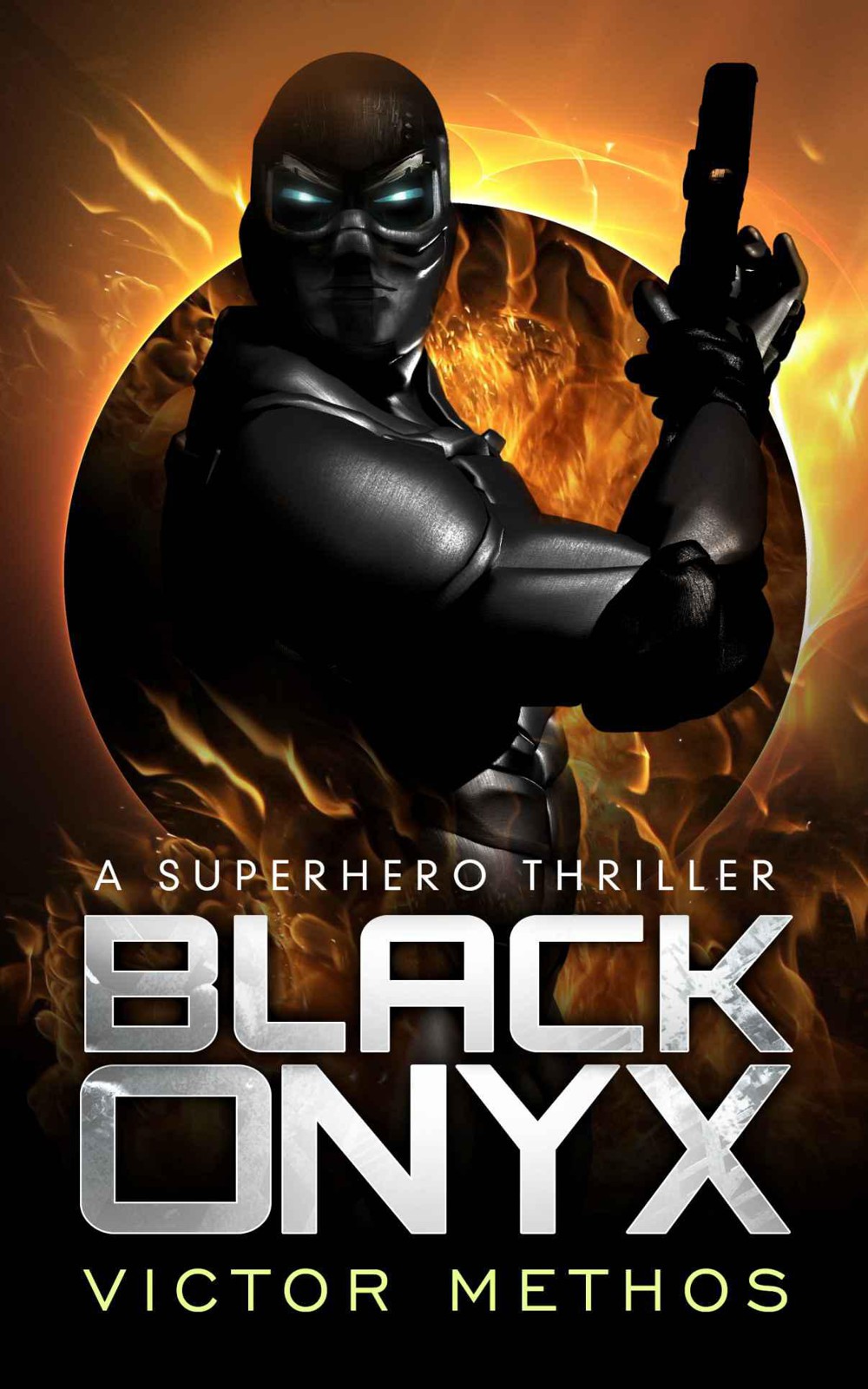 The spear narrowly missed Dillon’s head as he sprinted through the
dense Amazon jungle vines and into an open clearing. Another spear rocketed toward his legs, and he jumped as it imbedded itself into a tree. He was on the grass now, dashing for the safety of the trees on the other side of the clearing. He turned on his blue tooth by tapping it.

“
James! James, please tell me it’s not tea time or something!”

“If you’re gonna get me outta here, now would be a very good time.”

“Did you not find the
Yanomami to your liking?”

He glanced back to the dozen or so naked men, painted red and yellow, chasing him like a pack of lions after an injured gazelle. “Let’s just say we have a difference of opinion about conflict resolution.”

“Give me one moment.”

Dillon heard the whiz of an arrow and
felt a burning sting in his arm. He pulled the arrow out and continued sprinting until he got into the thick brush and the trees began absorbing the projectiles. Within a few moments, his vision began blurring.

“
James…I think they got me with something.”

“Higher interest rates. What the hell do you think?”

Dillon leaned against a large tree, his heart pounding in his chest, his shirt sticking to him with sweat. He knew the Amazon would be humid, but he had no idea that he wouldn’t be able to stay dry
for even a second. He glanced up. The branches hung low enough that he could reach them. He grabbed the first one and pulled himself up. Using his legs to push, he got up about twenty feet just as the Yanomami men ran underneath him. He watched them, holding his breath, as they sprinted away and disappeared like ghosts into the jungle.

“I’ve got you,”
James said in his ear. “Our plane is two kilometers to the northeast of your location.”

“I’m American,
James. I don’t know what the hell a kilometer is.”

“It’s about one and a quarter—never
mind, just go northeast. You do use directions in the States do you not?”

“Don’t leave without me.”

“I wouldn’t think of it. You have our passports.”

Dillon climbed down, breathing heav
ily. He adjusted his backpack, which contained the item he had come for: a seventh century Mayan crown encrusted with jewels. He checked to make sure it was there. He felt it, running his fingers along the glimmering stones, and then zipped up his pack. As he was about to turn away, he noticed the young Yanomami standing in front of him, his bow held taut with an arrow pointed at Dillon’s face.

“Oh, wow. Hey. Hi, how
ya doin’? Um, my name’s Dillon Mentzer. Maybe you heard a me? I was interviewed in
Outside
magazine like four months ago. Little piece but you know, you take what you can get.”

The
Yanomami smiled. He lowered the bow. He placed it down on the ground and held up his fists.

“Oh, hey, I haven’t been in a fight since like second grade. But I think I whopped that guy pretty bad
so you may not want to do this.”

The
Yanomami approached. Dillon held up his hands.

“I don’t want to fight you, really. Look
, you were all very nice and I’m sorry things turned out this way, but you know, stuff happens and we have to move on.”

Before he could blink, a fist bashed into his jaw and sent him sprawling onto his back. Dillon saw stars and the little man stood above him. He got to his feet and put his hands up.

“All right, have it your way.”

He began circling the man. He jabbed at him and hit the man square in the nose. The
Yanomami didn’t even flinch. He jabbed again and then swung with a hook and the Yanomami ducked, came up with a punch into the kidneys and then slammed him twice in the face. Dillon was on his back again. He was feeling dizzy, like he could go out at any moment. As he forced himself to stand, he picked up a handful of dirt. The Yanomami came in and Dillon threw the dirt into his eyes, causing the man to shriek as he was blinded.

Dillon grabbed the backpack and sprinted away. He quic
kly checked the compass on his iPhone, which said he was heading north. He adjusted for northeast and then didn’t look back as he ran. He felt funny, tingly. A calm euphoria was coming over him and he had a dopey grin on his face. A strong urge was there to just lie down in the shade, and he had to fight it with everything he had.

Eventually he couldn’t run anymore so he walked. The jungle vegetation was
sparse here, and he didn’t have much trouble as he came to a landing strip and saw the small puddle-jumper plane with two men standing next to it.

“Hey gang,” he said, leaning on the plane.

Niles, tall with
black hair and a dignified stare, said, “Are you drunk?”

James
said, “He’s poisoned, actually. Only a man in his twenties can be poisoned and still run through the jungle. Come on, we need to get him to a hospital. Help him up.”

Niles lifted Dillon by the legs and
James grabbed his upper body. He slipped off the backpack and put him in the plane, strapping him into his seat.

Miguel
Almanza drove through a section of Juarez, Mexico few people dared to go. Seated in the Mercedes next to him was a white male known to him only as John, looking nervous and pale.

It wasn’t that the neighborhood they were in was a seedy part of the city
; actually the opposite. Miguel could see that John was staring at the opulent mansions as they drove up the hill out of the city.

“I didn’t know there were homes like this here.”

“Yes,” Miguel said, “this is nice. But down there, no running water for the poor and they make two or three dollars a day here. Some of them have twenty people living in a house. But El Sacerdote is changing all that. He pays people fifty dollars a day just to be scouts or send messages. The police, they make a hundred dollars a day.”

“He pays the police salary?”

“Bribes,” John said. “Does he pay that to all the policemen?”

“What you called him, El
Sacerdote, I’ve heard that before. It means like holy man or something doesn’t it?”

They turn
ed right, up the hill, and wound around it several times, having a panoramic view of the city below and the bridge into the United States just six miles away. At the top of the hill was a mansion that looked like something a Roman emperor might have built. Miguel saw John’s eyes widen and it made him grin.

He called up at the gate an
d a guard came down to open it, a man with a Kalashnikov strapped to his back. He waved them through and Miguel parked the Mercedes in front.

“Don’t worry, John. If he
want you dead, he just kill you. He no bring you to his house.”

The two men stepped out of the car and walked up the steps past another guard to the front door of the mansion. Another man opened it for them and a woman was standing there. Miguel knew her as Sandy, but he’d seen her in several pornographic movies before he ever got to know her. She was standing in a white dress, El Sacerdote’s favorite color, with high heels. Miguel caught John staring at her chest and he hit him with his elbow to divert his attention.

“He’s waiting for you Miguel,” she said.

She turned and led them back through the mansion. It was decorated with art worth millions of dollars and busts of long dead kings. The hallway leading outside to the pool had marble statues of animals on either side.

Miguel hadn’t noticed it before, but he was right. All the animals were tigers or sharks or bears. Many of them in attack poses. At the far end were the stuffed heads of two Siberian tigers El Sacerdote had shot and killed on a hunt in Russia.

Several nude women were in the pool and some men were there too. Miguel recognized one as an American movie star but couldn’t remember any movies he’d been in
. At the far end of the pool, lying back on a lounge chair, was Sebastian Valdez: El Sacerdote. His sunglasses covered his eyes and he appeared to be asleep.

El
Sacerdote lifted his glasses. “John, how are you?”

“Life in the DEA treating you well?”

“It’s a living I guess.” He glanced to Miguel and then back. “I was told you wanted a meeting with me?”

“Yes, apparently word has not reached everyone in your organization that I am to be allowed to run my business.”

“One of your men arrested one of my men yesterday.
Possession with intent to distribute a class one controlled substance. Cocaine. A lot of cocaine.”

“So it displeases me,” El Sacerdote said, sitting up now.

“Just pay the bail and have your lawyers make a deal with the U.S. Attorney’s Office. They’ll play ball.”

“Oh, they’re already released from custody, that is not why you are here.”

The women screamed. Several men were hauling two crocodiles, each at least eight feet long. They slipped one in the pool and it dove to the bottom. The women jumped out of the pool, running to their towels and covering themselves as if that would protect them. The other crocodile was released as well and it dove into the deep end and remained perfectly still.

“They are miracles of evolution,” El
Sacerdote said. “They have no mercy, no remorse. They have one objective only—the furtherance of their own life. And they will destroy anything in their path to achieve that end. They will, I think, outlive our species.”

Just then
a man was dragged from a shed by the house. He was in a suit caked with dried blood. His face was beaten and bruised and he couldn’t walk so the two men hauled him next to the pool. One of them pulled out a knife and looked to El Sacerdote.

John said, “That’s Phil Stack.
He’s a field agent under my command. What the hell happened to him?”

“He arrested your guys and you kidnap him? Release him. Right now. I’m not kidding. Unless you want a shitstorm of DEA agents kicking down your door you release him right now.”

“As you wish.” El
Sacerdote nodded to the men. The one with the knife cut Phil across the face, releasing a torrent of blood, and let him go. He fell forward into the pool.

“What the hell are you doing!
” John screamed. “Let him go!”

“Get him outta there.”