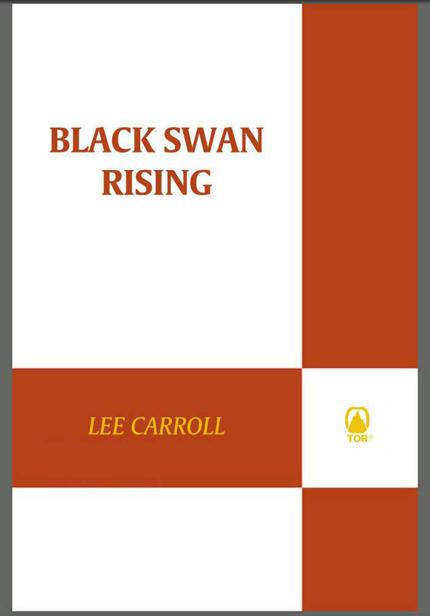 A Snowy Field in France

It Is the Lark

King of Moonshine, Prince of Dreams

The Train to Tarascon

Angel of the Waters

The Transmigration of Atoms

For our mothers, Elinor and Marge

We would like to thank our first readers, Gary Feinberg, Harry Steven Lazerus, Wendy Gold Rossi, Scott Silverman, and Nora Slonimsky, for their wisdom and insights. We thank Maggie Vicknair for naming things and making up magic symbols.

To Ed Bernstein and Sharon Khazzam we express our gratitude for their expertise regarding Ddraik’s computing skills and Garet’s jewelry design, respectively.

Lauren Lipton gave us exceptional and comprehensive feedback that was as inspired as her own brilliant novels are.

We thank the Cloisters for letting us inside their library.

Our editor, Paul Stevens, has been of crucial importance for his belief in the project and his astute editorial perspective. Our agents, Loretta Barrett and Nick Mullendore, have been superb readers and energetic advocates for Lee Carroll from the beginning.

I’d never been in the antiques store before.

That was the first strange circumstance. I knew the Village like the back of my hand. I grew up in a town house in the West Village, which I’d just learned was so heavily mortgaged that even if my father and I sold it we would still be under a mountain of debt. It was that news—along with a litany of dire economic circumstances—that had left me so shocked and disoriented that I’d walked back from the lawyer’s office in lower Manhattan in a daze. I hadn’t even noticed the light rain that had begun to fall or the fog rolling in from the Hudson River.

Only when a sudden violent deluge forced me to duck into a doorway did I realize I was lost. Looking out through a curtain of rain, I saw I was on a narrow cobblestone street. I was too far from either corner to see a street sign through the heavy mist. Somewhere in the West Village or Tribeca, maybe? Had I crossed Canal Street? This part of town had changed so much, become so much trendier, in recent years that it all looked different. I must be near the river, though. The wind was blowing from the south carrying with it the smell of the Hudson and,
from beyond the bay, the deep Atlantic. On chill autumn days like this, with low-lying clouds obscuring the tops of buildings and fog softening the edges of brick and granite, I liked to imagine myself in an older Manhattan—a Dutch seaport where traders and merchants came from the Old World to make their fortunes—not the hub of the financial world on the edge of economic collapse.

I shivered—I was soaked to the skin—and turned toward the door to see if I could find an address. I found, instead, a tall, wild-eyed woman staring back at me, her long black hair hanging limply in front of her pale face like a vengeful ghost out of a Japanese horror film. It was my own reflection. I was pretty sure that when I left my house this morning I was a reasonably attractive twenty-six-year-old woman, but this is what bad news and rain had done to me. I tucked my hair behind my ears and leaned down to look for an address, but the gilt letters on the door had been worn away long ago, leaving a sprinkling of gold dust like a magician’s veil and a few scattered letters. The only intact word was
mist.
Probably the tail end of
chemist
. It wasn’t a chemist’s anymore, though. It was an antiques store, that much was clear from the contents of the window—Georgian silver, sapphire and diamond rings, gold pocket watches—all beautiful, but a bit too precious for my taste. Peering through the glass door, I saw that the shop itself looked like a tiny jewel box, the walls paneled in dark wood, the sparkling glass cases lined with garnet-colored velvet, a curtain of wine-colored damask hanging behind a polished mahogany counter carved in sinuous art-nouveau curves. The white-haired man who sat behind the counter looked as if he had been set there as carefully as a pearl in an onyx brooch. He was examining something through a watchmaker’s loupe, but then he looked
up—one eye grotesquely magnified by the lens—and saw me standing in the doorway. He reached under the counter and pressed a button to ring me in.

I can ask for directions to the closest subway station,
I thought as I opened the door. I wouldn’t be so rude as to do it right away, though. I hated when tourists popped their heads into our art gallery to ask for directions. I’d look around first, although I doubted the shop carried the signet rings I used for my molds and I hardly ever shopped for myself anymore—and it didn’t look as if I’d be doing so in the near future. I wore on my right ring finger the silver signet ring my mother had given me for my sixteenth birthday. Engraved in the silver was a swan, its neck arched and wings spread out as if about to take flight—or in heraldry terms,
a swan rising
. Encircling the swan, reversed so that they would appear correct when pressed into wax, were the words
Rara avis in terris, nigroque simillima cygno.

“ ‘A rare bird on earth, very much like a black swan,’ ” my mother had translated for me. “That’s what you are, Garet, a rare bird. Unique. Don’t ever let anyone make you think you have to be the same as everyone else.”

Someone had rubbed his finger over the words so often they could barely be read, and fine cracks ran through the design, but when I had pressed the ring into hot wax, the image and words were remarkably clear. My mother, who had worked as an apprentice at Asprey’s in London, had shown me how to make a mold from the wax print and cast a medallion from the imprint of the ring—the same medallion I still wore today, and every day. So many people asked about the medallion that I had gone out looking for more signet rings and made more medallions, which I had sold to students and teachers at my high school and to clients at the gallery. I’d made enough to
put myself through a jewelry design program at FIT and to start a small company with a studio on the top floor of the town house. I called it Cygnet Designs after the Latin word for swan. It was doing pretty well four years later, but I didn’t make enough to repay the enormous debt my father had incurred.

How many of my customers will feel like they can afford to buy little trinkets like my medallions,
I wondered as I entered the shop.
How long will quaint little businesses like mine—or this one—survive if things really get bad?

If the proprietor of the shop was anxious about his present prospects of making a sale, he didn’t show it. He continued to tinker with the watch he was fixing as I browsed the shelves. They held a strange assortment of wares. There were lockets opened to show sepia-toned photographs under mottled glass, and brooches woven from the hair of the deceased. Many of the rings and brooches were adorned with urns, willow trees, and doves—all traditional symbols of mourning. One whole shelf contained nothing but brooches of painted eyes. I’d read about these in a jewelry history class. They were called lover’s eye brooches, a Georgian style that had been made fashionable by the Prince of Wales when he commissioned his court miniaturist to paint just his mistress’s eye so no one would guess her identity. I’d seen pictures of them in books and one or two in antiques shops, but it was disconcerting to see so many of the disembodied eyes in one place.

“Was there anything in particular you were looking for?”

The question was voiced so softly that for a moment I thought it was only in my head. I couldn’t help responding, in my head,
A way out of my troubles, thank you very much.
But aloud I said, “I’m always on the lookout for old signet rings. I use them in my jewelry designs.” I held up my necklace for the
man to see. He held up his magnifying glass and leaned over the counter to get a better look.

The moment he saw the design he lowered the glass and looked up. His eyes were a curious shade of amber, all the more startling in a deeply bronzed face framed by snow-white hair and carefully trimmed goatee.

“Are you by any chance Garet James, the owner of Cygnet Designs?” he asked.

“Why, yes,” I said, pleased at the recognition. I’d gotten some good press, but I wasn’t used to being “recognized.” “That’s me. I’m surprised an antiques dealer would know it.”

“I like to keep abreast of modern times,” he said. When he smiled, a million fine lines spanned his deeply bronzed skin. I had the notion that he had spent time at sea, squinting into sun and rain at the helm of a ship, but it was more likely he’d just played a few too many rounds on the golf course. “I read the piece in
New York
magazine last week. I admire the way you make use of old materials to make something new. You’re a real artist.”

“Just a craftsman,” I said quickly.

“Not really. I know the difference.” I’d grown up among artists—painters and sculptors—and I knew what it meant to be a real artist, but I didn’t have to tell this stranger all that—or that the last thing I wanted to be was an artist.

He narrowed his eyes. “I’ve looked at your designs on your website. But I don’t believe I’ve seen this particular design there.”