Read Bleed for Me Online 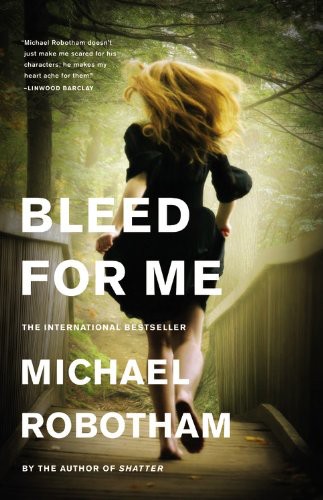 The Drowning Man (aka Lost)

All characters and events in this publication, other

than those clearly in the public domain, are fictitious

and any resemblance to real persons,

No part of this publication may be reproduced,

stored in a retrieval system, or transmitted, in any

form or by any means, without the prior

permission in writing of the publisher, nor be

otherwise circulated in any form of binding or

cover other than that in which it is published and

without a similar condition including this

is available from the British Library.

‘She was Lo, plain Lo, in the morning, standing four-feet-ten in one sock. She was Lola in slacks. She was Dolly at school. She was Dolores on the dotted line. But in my arms she was always Lolita.’

‘Everybody lies - every day; every hour; awake; asleep; in his dreams; in his joy; in his mourning; if he keeps his tongue still, his hands, his toes, his eyes, his attitude, will convey deception.’

Writing might be regarded as a solitary profession, but publishing certainly is not. I am indebted to many people without whom I couldn’t have written this novel and would have been forced to find a proper job.

Firstly I must thank my agents Mark Lucas and Richard Pine whose thoughts and notes on the manuscript improved it immeasurably. The same can also be said of my publisher Ursula Mackenzie and editor David Shel ey, who are among the true believers.

For their friendship and hospitality, I thank Mark and Sara Derry, Richard and Emma Honey and Martyn Forrester, who know how much I hate hotel rooms and how much I enjoy their company.

For their patience and love, I wil always be indebted to my three daughters Alex, Charlotte and Bel a, who put up with my highs and lows, laughing at my eccentricities. Thankful y, they take after their mother, who keeps my feet on the ground so I can live with my head in the clouds.

Final y I make special mention of Annie Robinson, whose name appears in
Bleed for Me
. Although Annie didn’t get the chance to read about her namesake, I know that she’s partying with the angels and living in our hearts.

i should start by telling you my name, although it’s not really important. names are just labels that we grow into. we might hate them, we might want to change them, but eventually we
suit them.

when i was very young i used to hide in the dirty laundry basket because i liked the smell of my father’s work clothes and it made me feel closer to him. he used to call me his ‘little
red riding hood’ and would chase me around my bedroom growling like a wolf until i collapsed into giggles. i loved him then.

when i was eleven or twelve i took a stanley knife from my father’s shed and pinched a roll of flesh on my inner arm before slicing it open. it wasn’t very deep, but enough to bleed
for a while. i don’t know where the idea came from, but somehow it gave me something i needed. a pain on the outside to match the inside.

i don’t cut often. sometimes once a week, once a month, once i went for six months. in the winter i cut my wrists and forearms because my school blazer will cover the marks. in the
summer i cut my stomach because a one-piece swimsuit will hide the evidence.

once or twice i’ve cut too deeply but each time i managed to fix myself, using a needle and thread. i bet that makes you shudder but it didn’t hurt so much and i boiled the needle
first.

when i bleed i feel calm and clear-headed. it’s like the poison inside me is dripping out. even when i’ve stopped bleeding, i finger the cuts lovingly. i kiss them goodnight.

some are new cuts on virgin skin. others are old wounds reopened. razor blades and stanley knives are best. they’re clean and quick. knives are clumsy and needles don’t
produce enough blood.

you want to know the reason? you want to know why someone would bleed in secret? it’s because i deserve it. i deserve to be punished. to punish myself. love is pain and pain is
love and they will never leave me alone in the world.

you think i’m a masochist.

you think you know me.

you think you remember what it’s like to be fourteen.

you think you understand me.

i bleed for you.

If I could tel you one thing about Liam Baker’s life it would be this: when he was eighteen years old he beat a girl half to death and left her paralysed from the waist down because she tipped a bucket of popcorn over his head.

As defining events go, nothing else comes close for Liam, not the death of his mother or his faith in God or the three years he has spent in a secure psychiatric hospital - al of which can be attributed, in one way or another, to that moment of madness in a cinema queue.

‘That moment of madness’ is the term his psychiatrist just used. Her name is Dr Victoria Naparstek and she’s giving evidence before a Mental Health Review Tribunal, listing Liam’s achievements as though he’s about to graduate from university.

Dr Naparstek is a good-looking woman, younger than I expected; mid-thirties with honey-blonde hair, brushed back and gathered in a tortoiseshel clasp. Strands have pul ed loose and now frame her features, which otherwise would look quite elfin and sharp. Despite her surname, her accent is Glaswegian but not harsh or guttural, more a Scottish lilt, which makes her sound gay and carefree, even when a man’s freedom is being argued. I wonder if she’s aware that her eyes devour rather than register a person. Perhaps I’m being unfair.

Liam is sitting on a chair beside her. It has been four years since I saw him last, but the change is remarkable. No longer awkward and uncoordinated, Liam has put on weight and his glasses have gone, replaced by contact lenses that make his normal y pale blue eyes appear darker.

Dressed in a long-sleeved cotton shirt and jeans, his shoes have pointed toes, which are fashionable and he has gel ed his hair so that it pokes towards the ceiling. I can picture him getting ready for this hearing, taking extra care with his appearance because he knows how important it is to look his best.

Out the window I can see a wal ed courtyard, dotted with potted plants and smal trees. A dozen patients are exercising, each inhabiting a different space, without acknowledging the others’ existence. Some take a few strides in one direction and then stop, as though lost, and start in a different direction. Others are swinging their arms and marching around the perimeter as though it is a parade ground. One young man seems to be addressing an audience while another has crawled beneath a bench as if sheltering from an imaginary storm.

‘In my months working with Liam, I have discovered a troubled young man, who has worked very hard to better himself. His anger issues are under control and his social skil s are greatly improved. For the past four months he has been part of our shared-house programme, living co-operatively with other patients, cooking, cleaning and washing, making their own rules. Liam has been a calming influence - a team leader. Recently, we had a critical incident when a male resident took a hostage at knifepoint and barricaded a door. It took five minutes for security to gain access to the shared house, by which time Liam had defused the situation. It was amazing to watch.’

I glance at the three members of the review tribunal - a judge, a medical specialist and a lay person with mental health experience. Do they look ‘amazed’, I wonder. Perhaps they’re just not showing it.

The tribunal must decide if Liam should be released. That’s how the system works. If an offender is thought to be cured, or approaching being cured, they are considered for rehabilitation and release. From a high-security hospital they’re transferred to a regional secure unit for further treatment. If that goes wel , they are given increasing amounts of leave, first in the grounds of the unit and later in the local streets with an escort, and then alone.

I am not here in any official capacity. This should be one of my half-days at Bath University where I’ve taught psychology for the past three years. That’s how long it’s been since I quit my clinical practice. Do I miss it? No. It lives with me stil . I remember every patient - the cutters, the groomers, the addicts, the narcissists, the sociopaths and the sexual predators; those who were too frightened to step out into the world and the few who wanted to burn it down.

Liam was one of them. I guess you could say I put him here because I recommended he be sectioned and given treatment rather than sent to a regular prison.

Dr Naparstek has finished. She smiles and leans down to whisper something in Liam’s ear, squeezing his shoulder. Liam’s eyes swim but aren’t focused on her face. He is looking down the front of her blouse. Resuming her seat, she crosses her legs beneath her charcoal-grey skirt.

The judge looks up. ‘Is there anyone else who would like to address the tribunal?’

It takes me a moment to get to my feet. Sometimes my legs don’t do as they’re told. My brain sends the messages but they fail to arrive or like London buses they come al at once causing my limbs to either lock up or take me backwards, sideways and occasional y forwards, so that I look like I’m being operated via remote control by a demented toddler.

The condition is known as Parkinson’s - a progressive, degenerative, chronic but not contagious disease that means I’m losing my brain without losing my mind. I wil not say incurable. They wil find a cure one day.

I have found my feet now. ‘My name is Professor Joseph O’Loughlin. I was hoping I could ask Liam a few questions.’

The judge tilts his chin to his chest. ‘What’s your interest in this case, Professor?’

‘I’m a clinical psychologist. Liam and I are acquainted. I provided his pre-sentencing assessment.’

‘Have you treated Liam since then?’

‘No. I’m just hoping to understand the context.’

Dr Naparstek has turned to stare at me. She doesn’t seem very impressed. I make my way to the front of the room. The linoleum floor is shining as daylight slants through barred windows, leaving geometric patterns.

I place two chairs facing each other. Liam looks at Dr Naparstek, who nods. He moves forward, tal er than I remember, less confident than a few minutes ago. We sit opposite, our knees almost touching.

‘It’s good to see you again. How have you been?’

Karen Anne Golden - The Cats That 03 - The Cats That Told a Fortune by Karen Anne Golden
Everything Is So Political by Sandra McIntyre
The Philadelphia Murder Story by Leslie Ford
Guardian: Darkness Rising by Melanie Houtman
Corsair by Chris Bunch
The Hourglass by K. S. Smith, Megan C. Smith
The Hands-Off Manager by Steve Chandler
Fire Song by Roberta Gellis
Up West by Pip Granger
Meet Me Under the Mistletoe by JoAnn Durgin