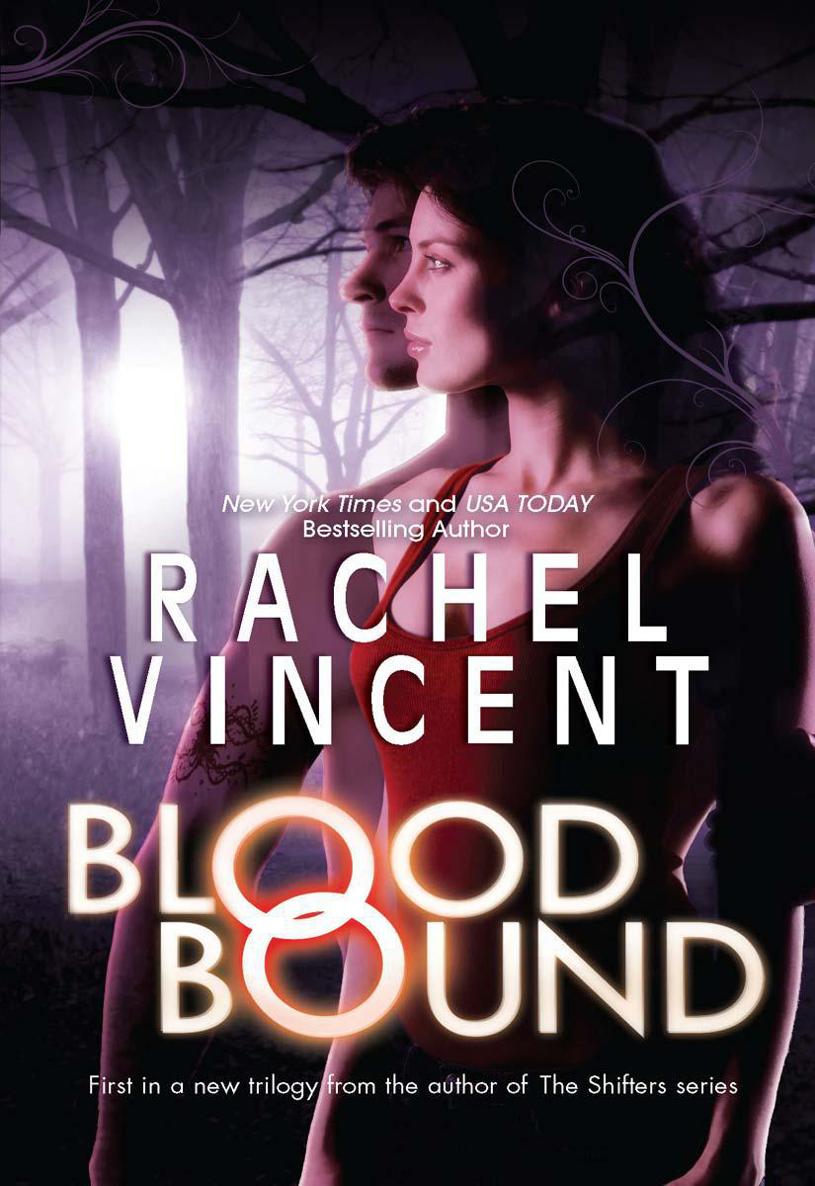 “Compelling and edgy, dark and evocative,
Stray
is a must read! I loved it from beginning to end.”

“A well-thought-out vision of werecat social structure as well as a heroine who insists on carving her own path.”

“Every time I said I was going to read just one more chapter, I’d find myself three chapters later.”

—
Bitten by Books
on
Pride

“Vincent continues to impress with the freshness of her approach and voice. Action and intrigue abound, and Faythe is still a delight.”

“It’s unique, it’s a little creepy, it’s packed full of action, adrenaline, and emotion, and you know what I loved most? Just like all of Rachel Vincent’s Shifters novels, it’s
clever.
”

—
Ink and Paper
on
Shift

“The surprises and twists kept knocking me off my feet. I couldn’t have asked for a better cast, plot, or ending…”

“My Soul to Lose”

MY SOUL TO TAKE

MY SOUL TO SAVE

MY SOUL TO KEEP

MY SOUL TO STEAL

Look for Rachel Vincent’s next
Unbound
novel from MIRA Books

To #1,
who understands that a writer can never really leave
her work at work. I live in my own head, constantly
distracted from the real world by the ones I make up,
and it takes someone special to put up with that.
I hope you know how special you are.
And I didn’t even have to make you up.

O
nly two-thirty in the morning, and I already had blood on my hands. The most messed-up part of that? It was the hour that bothered me.

“You sure it’s him, Liv?” Booker swiped one hand over his sweaty, stubbly face as we stared at the lit window on the third floor. The apartment building was long and plain, like a cracker box on its side, and the moonless night only smeared the sides of the featureless building into the ambient darkness.

I nodded, shoving both cold, chapped hands into my jacket pockets. It was warm for early March, but still cold for me.

My eyes closed, and again I clutched the blood-stiffened swatch of cloth in my right pocket, inhaling deeply through my nose, and the world exploded into a bouquet of scents. Relying on years of training, I sorted through them rapidly, mentally tossing aside those I couldn’t use. The metal tang of several huge trash bins. The chemical bite of Booker’s cologne. And the pervasive, ambient smells of life east of the river—motor oil, fried food and sweat.

What was left, with those more obvious smells out of the way, was the trail I’d followed all over town, as much a
feel
as a true scent, and a virtual match to the blood sample in my pocket.

I am a Tracker. More specifically—and colloquially—I’m a bloodhound. Given a decent, recent sample of your blood, I can find you no matter where you hide. Officially, my range is about eighty miles—on the high end of average. Unofficially…well, let’s just say I’m good at what I do. But not too good. Too much Skill will get you noticed. And I know better than to get noticed.

Booker cleared his throat and I opened my eyes to find myself staring up at the lit window again—the only occupant still awake. “Ninety-five percent. It’s either him or a close male relative, and that’s the best you’re gonna get with a dry blood sample,” I said, as water dripped from a gutter somewhere to my left. “Tell Rawlinson I’ll send him a bill.”

Booker pulled his black ski cap over his ears. “He’s not gonna like that.”

“I don’t give a shit what he likes.” I turned and walked back the way I’d come, listening as my steel-toed work boots echoed in the alley. I was exhausted and pissed off from being woken at two on a Friday morning, yet still pleased for the excuse to charge nearly double my usual rate. Office space in the south fork doesn’t come cheap.

“Warren!” a deep voice barked from behind me, and I groaned beneath my breath. I turned slowly to see Adam Rawlinson step out from behind a rusty Dumpster, his dark hair, skin and expensive wool coat blending into the thick shadows. No telling how long he’d been there. Watching. Listening.

Travelers—shadow-walkers—were notorious for shit like that. They can step into a shadow in their own homes and step out of another shadow across town a split second ter. You never know they’re coming until they’re already there. It’s a convenient Skill—except when it’s annoying as hell.

“Hey, Adam. Kinda late for a stroll, isn’t it?” Especially considering that his home address was at least two tax brackets above the inner-city grime now clinging to the soles of his dress shoes. “What? You don’t trust me?”

I shrugged, my arms crossed over my dark jacket. “You’re not going to get a hundred-percent certainty without a better blood sample or his full name to flesh out the scent.”

He nodded; I wasn’t telling him anything new. “But you’d know for sure if you had a current sample to compare it to, right? Something fresh?”

“I don’t get my hands dirty anymore. You know that.” I follow the blood scent, and I can track by name if I have to. But that’s where my job ends—no reason for me to be there when the action starts. My life was messy enough without adding blood spatter.

“Booker’s here for the takedown. I just need you to get close enough for a positive ID,” Rawlinson insisted. “We don’t know his name, and we’re not going to get a better blood sample. I played hell getting that one out of the evidence room as it is. This is personal, Liv.”

Damn it.
Booker was working without a partner and Adam Rawlinson had come out to see the show. This one was off the books. “Is this about Alisha?” Rawlinson’s daughter had been killed in a carjacking the week before. He’d shown up for work the next day as if nothing had happened. As if her death meant nothing to him.

Here was proof to the contrary. I was almost relieved.

His gaze never wavered. “The cops had a near miss, and one of them winged the bastard last night. The sample’s from the passenger’s seat he bled all over.”

I exhaled, watching him closely. “Why do I get the feeling you’re not going to turn this asshole in?” Rawlinson’s operation had a rock-solid reputation. Official bounty-hunting in cooperation with bail bondsmen and the proper authorities, all on the up-and-up. He would turn in the target, collect a check for freelance services from the city, then pay the rest of his crew. Which used to include me.

“Because you’re a very smart girl.” He started walking toward the building, and I followed reluctantly. “You know, I’d love to have you back on the crew full-time.”

“That’s because your new Tracker couldn’t find his own dick in the dark.” I hesitated, and the night was quiet, but for our footsteps on cracked asphalt. “You know better than to start shit east of the river without a work order, Adam. What if someone sees you?”

“That’s why you’re here.” He met my gaze, and I had to respect his honesty, even if it pissed me off. “Everyone knows you’re working for Ruben Cavazos, so no one will think to report this if you’re with us.”

“ work for
myself.
” And myself had to pay rent on a shitty apartment
and
a tiny office, repairs on a car saddled with more used parts than Frankenstein’s monster, and interest and principle on student loans for a degree I’d never once put to use. “I freelance for Cavazos just like I freelance for you.” And everyone knew that black hats paid better than white knights. “Having me with you isn’t going to keep your feet cool while you walk through flames, Adam. You need to let the police handle this.”

“We both know there’s nothing they can do.”

But that wasn’t true. They
could
do plenty—but they wouldn’t. Not as long as the courts refused to recognize Tracking as a legal form of identification and discovery. The world knew about us—the Skilled had been dragged into the spotlight almost thirty years ago—but the government had yet to officially recognize our existence. We were the biggest open secret in history. We had no rights and no protection under the law, beyond those afforded us as natural-born citizens.

What that meant in legal circles was that no government office could officially hire Binders to draft or seal contracts. Nor could they use evidence gathered via Trackers, like me. Everything involving the dozen or so Skilled abilities had to be unofficial consultations and contract work. And completely off the books.

What that meant in criminal circles was the gradual formation of the single most profitable—and ruthless—black-market system in history. Because the government didn’t officially recognize our Skills, they couldn’t regulate or police them, which left a huge gap at the top of the power pyramid. A gap that had been filled by various Skilled crime syndicates across the world, but most notably—and locally—by rival black-market kingpins Jake Tower and Ruben Cavazos, who together controlled more than two-thirds of the city.

Think of my city like a giant peace sign, divided by the river. Everything east of the river is controlled by Cavazos, everything west of the river by Tower. And on the south side, cradled by the fork in the river, you can live, eat and breathe without lining the pockets of either organization—but you’ll do it at a much higher price, because those who understand the world they live in and can afford the rent
will
pay to avoid picking a side.