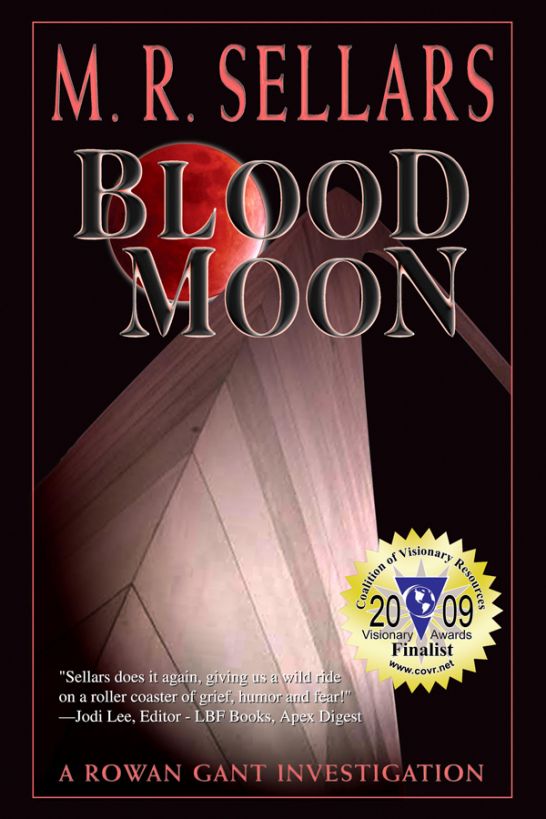 This book is a work of fiction. Names,
characters, places, and incidents either are the product of the
author’s imagination or are used fictitiously.

Any resemblance to actual events or locales
or persons, living or dead, is entirely coincidental.

E.M.A. Mysteries is an imprint of WillowTree
Press

If you would like to share this book with
another person, please purchase an additional copy for each
person

This book may not be reproduced in whole or
in part, by any means, electronic or mechanical, without
permission.

This is the part where I gush about the folks
who make all this possible. “This” being all of these words I hurl
at paper and hope like hell at least some of them stick. This list
is certainly not comprehensive. There are many, many folks who make
the Rowan Gant series possible, not the least of which are those of
you who buy them each time I write a new one. However, the folks
listed here have been directly responsible for support, insurance,
research, ideas, steak, crackers, beer, assorted boozes, chips and
dip, various candies, donuts, ice cream, and sometimes even a
shoulder to cry on when things aren’t going the way they are
supposed to in my world. For that, I owe them at the very least a
kudo or two here… After all, as my dear friend Tish would say,
“It’s a moral imperative.”—

The usual suspects… After being listed in the
last eight novels, you should all know who you are by now. Suffice
it to say, each of you has my sincerest love, admiration, and
thanks for keeping me sane/fed/upright/not lost…

As for additional suspects and persons of
interest…

My Ostara Fest 2008 handler, “Lolly” and also
her business partner Joyce for making sure “Lolly” remembered to
feed me…
sometimes
…Oh, and just so you know, “The bride is
here and she’s wearing tie-dye.” (Don’t ask.)

The Breckenridge Demolition Crew—you guys and
gals rock, as usual…

And finally, as always, everyone who takes
the time to pick up one of my novels, read it, and then recommends
it to a friend.

I am a better person for

While the city of St. Louis and its various
notable landmarks are certainly real, many names have been changed
and liberties taken with some of the details in this book. They are
fabrications. They are pieces of fiction within fiction to create
an illusion of reality to be experienced and enjoyed.

In short, I made them up because it helped me
make the story more entertaining—or in some cases, just because I
wanted to do so.

Note also that this book is a first-person
narrative. You are seeing this story through the eyes of Rowan
Gant. The words you are reading are his thoughts. In first person
writing, the narrative should match the dialogue of the character
telling the story. Since Rowan (and anyone else that I know of for
that matter) does not speak in perfect, unblemished English
throughout his dialogue, he will not do so throughout his
narrative. Therefore, you will notice that some grammatical
anomalies have been retained (under protest from editors) in order
to support this illusion of reality.

Let me repeat something—I DID IT ON PURPOSE.
Do NOT send me an email complaining about my grammar. It is a rude
thing to do, and it does nothing more than waste your valuable
time. If you find a typo, that is a different story. Even editors
miss a few now and then. They are no more perfect than you or
me.

Finally, this book is not intended as a
primer for WitchCraft, Wicca, or any Pagan path. However, please
note that the rituals, spells, and explanations of these
religious/magickal practices are accurate. Some of my explanations
may not fit your particular tradition, but you should remember that
your explanations might not fit mine either.

And, yes, some of the magick is “over the
top.” But, like I said in the first paragraph, this is fiction…

The sun shall be turned into darkness, and
the
moon into blood
,

before the great and terrible day of the Lord
come...

…
The muffled report of something that
sounded far too much like gunshots popped loudly from the speaker
of the radio and was followed immediately by panicked
screaming.

“
Shots fired!” Agent Book’s voice issued
between tinny burps of static. His distressed tone was underscored
by the chaotic noise coming from the frightened crowd.

“
Everybody move!” another voice ordered.
“Now!”

Seconds later Book’s words were again
hemorrhaging from the speaker, devoid of all composure, “SHOTS
FIRED! MANDALAY’S HIT! OFFICER DOWN! OFFICER DOWN!”

All we could do was sit there, horrified, and
listen to the distant scene unfold. They were inside, and we were
out here. Deep in my gut I had known something would go wrong with
this operation, I just hadn’t expected it to be this.

I glanced over at my friend, Detective
Benjamin Storm. If adrenalin hadn’t been dumping into his system
before this point, it definitely was now. He came fully upright in
his seat as the frantic chatter continued to burst from the
radio.

The device hissed for a second, then we heard
Agent Book exclaim, “JESUS CHRIST… JESUS CHRIST… ONE GOT PAST HER
VEST! SHE’S BLEEDING BAD! WE NEED PARAMEDICS RIGHT NOW!”

I couldn’t keep the horrible soundtrack from
screeching through my head. The nightmare ran in an endless loop,
as clear and terrifying as when I had originally heard it a few
short hours ago. I could only assume my subconscious was forcing me
to relive the event as a by-product of the fear that was now boring
a hole in my chest; or maybe it was the guilt that was twisting my
gut into a hard knot. The way I felt, I was willing to lay odds
both of them were to blame.

However, if forced to pick one over the other
I would say the guilt was probably in the lead. Primarily because
it wasn’t just the ordinary remorse one feels over being unscathed
when someone else is injured. No, this was much worse. It was the
sickening sort of transgression that came from being relieved over
another’s misfortune.

Special Agent Constance Mandalay was a dear
friend, and I certainly had not wished for this to happen. Not to
anyone, but especially not to her of all people. What I wanted
right now was for my friend to be okay—to come out of this grinning
and wondering “why all the fuss.” But, in the same moment, a large
part of me was grateful that it was her who was now on the verge of
death, and that was the source of my guilt. I didn’t want Constance
to die, but if someone had to I was relieved that it was
she—because the most likely alternative candidate was patently
unthinkable for me.

The reason it was so inconceivable in my mind
was because my wife had been the intended target. Moreover, had
Felicity in all her stubbornness been allowed the choice, she
actually would have been in the line of fire rather than safely
distant from the scene. But, to my relief, real life bears little
resemblance to melodramatic television, and the FBI wasn’t about to
purposely place a civilian in harm’s way. Instead, Constance had
taken her place. Risky as even that was, it seemed the only chance
at stopping a serial killer who had escalated, was quickly
decompensating, and had now set her sights on my wife and me.

Of course, before everything was over,
Felicity made that step across the boundary of good sense anyway,
but I couldn’t really blame her. She wasn’t exactly herself when it
happened.

Still, when all was said and done, my wife
was safe, Constance was on an operating table, and the killer had
been stopped. But, her capture had come at a steep and still not
fully determined cost.

We’d been told the wounded federal agent had
gone into cardiac arrest during the ambulance ride, but they had
managed to stabilize her quickly. All we had heard since was that
she had lost a lot of blood and that she was still in surgery. The
phrase “touch and go” and the word “critical” had been stressed,
but other than that, nobody was saying much of anything else.

Nobody, that is, except the disembodied
voices in my head.

“
Book! What is your exact
location?!”

“
Just outside the forest exhibit! Right
before the path splits! Hurry!”

“
Found the gun,” Agent Frye’s voice
blipped over the air. “But no shooter. The area is clear. She must
have dispersed with the crowd.”

“
Washburn, cover southeast,” a voice
ordered. “If she didn’t go past Book and Frye, then she has to be
heading that way. I’m on the main path coming in toward
you.”

“
We’re locking down the park,” another
voice added. “SWAT will be here in two.”

The device continued to burp and hiss with
various voices for a moment, all of them reporting that there was
no sign of Annalise Devereaux, the serial killer at the center of
this evil. There was a quick burst of silence, then one of the
agents came across the speaker, “I’ve got something. Red wig in a
trashcan outside the restrooms near the stuffed animal workshop… Be
advised the subject may have changed her appearance.”

“
WHERE ARE THOSE PARAMEDICS?!” Book’s
frenzied words bled through on the heels of the
announcement.

“
Where are those paramedics?!”

“
Where are those paramedics
?!”

I struggled to ignore the echo of his
fear-stricken voice repeating in my head. The conflicting emotions
already had me on the edge of emptying my stomach with extreme
prejudice. Constantly reliving the horror was only serving to make
the nausea worse.

I tried to think about something else but
wasn’t having much luck. Out of desperation I sent my eyes
searching for something on which to focus, and my gaze fell across
the illuminated elevator control panel in front of me. I locked
onto it and struggled to concentrate. After a moment it seemed to
work as my mind shifted gears. Of course, I should have known it
wouldn’t last. My brain seemed intent on continuing the
self-torture and wasn’t about to let a little thing like switching
trains of thought stop it from doing so.

With less than ten seconds respite of staring
blankly at the glowing lights, my thoughts wandered right back into
the darkness. My subconscious was in control, and the luminance in
front of me simply triggered another morbid reminder of why we were
here. Without warning I now found myself wondering about the light
described by many who have come back from the brink of death.
Technically, I myself had suffered clinical death on more than one
occasion, but all I remembered of it was darkness. My own
experience made me think perhaps the proverbial light was just a
trick of the synapses. Nothing more than a hazy glare brought about
by an oxygen-deprived brain being bombarded with intensely focused
illumination, especially in a place like this. I hadn’t been to a
hospital yet that wasn’t filled with harsh brilliance, and this one
was no different.

Observe a su gato by Desmond Morris
Tabula Rasa by Kitty Thomas
Bed of Roses by McRide, Harley
The Book of Love by Lynn Weingarten
The Same Deep Water by Swallow, Lisa
Heatseeker (Atrati) by Monroe, Lucy
A Misalliance by Anita Brookner
The Blind Side by Michael Lewis
A Family Affair (A Taboo Tale #2) by Violet Williams
Madonna and the Starship (9781616961220) by Morrow, James