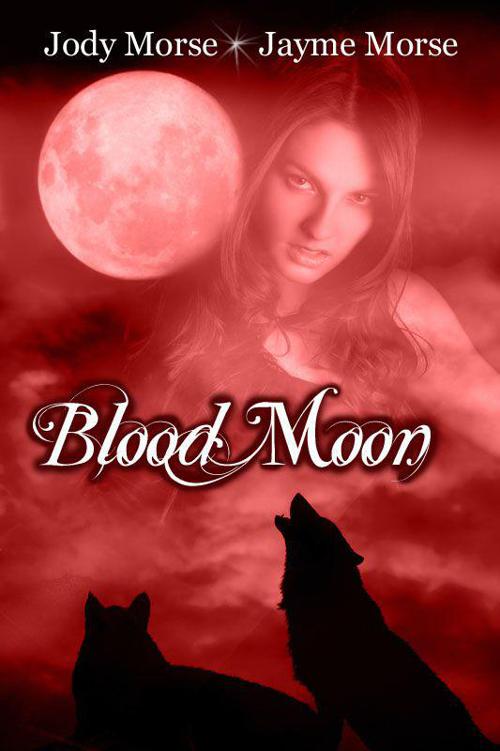 Blood Moon is a work of fiction. The names, characters, places, and incidents in this book are products of the author’s imaginations or have been used fictitiously. Any similarity to real persons or locations is coincidental and not intended by the authors.

Thank you for respecting the hard work of these authors.

All rights reserved. No part of this book may be reproduced in any form or by any means, electronic or mechanical, without permission in writing from Jody Morse and Jayme Morse.

Connect with the authors at:

The yellow lilies grew in patches over the cold ground, covering the dirt where Lilly Phillips had taken her last breath. Samara
didn’t even know it was possible
for lilies to grow this time of year but since the lilies had appeared
within the days followin
g Lilly’s death, Samara liked to think that it was a part of her, trying to offer a tiny ray of hope through the crispness of autumn.

Sitting
on the ground in front of the lilies, Samara felt her
eyes fill up with tears. If Samara
could change what had happened that nigh
t or find some way to bring Lilly
back, she would. But she couldn’t. It was too late. Lilly was gone for good.

Samara heard footsteps
from
behind her. She glanced over her shoulder as her mate, Luke Davenport sat beside her, wrapping an arm around her shoulder. “If someone sees you out here, they’ll think you’re guilty,” Luke said, motioning towards
the yellow crime scene tape next to them.

“Well, I
feel
guilty,” Samara said, sniffing. This was the first time she had allowed herself to grieve over Lilly.
W
ith everything else going on in her life right now, she wanted to at least try to stay strong.
But s
taying strong wasn’t going to change the fact tha
t Lilly was gone forever
. . . and that it was partly Samara’s
own fault
.

Samara sighed. She wanted to believe him, but she knew that none of this would have happe
ned if it hadn’t been for
her involvement that night.

Closing her eyes, Samara’s mind drifted back to the night of the fight, remembering the sound of the body as it hit the ground with a loud thump.
At first, she had been unsure who the body belonged to. Aside from Seth and Jason, all of the other wolves on both packs had a similar shade o
f gray fur and the moon just barely lit up the night sky
enough to make out the outlines of each wolf.

Samara howled, fearing that the dead body belonged to someone who she cared about. Co
uld it be Declan . . . or Luke?

I’m fine
, Luke had told her. Looking at him, Samara breathed in. Thankfully, he was still alive. Samara glanced at the wolves that remaine
d standing
around her
, as the others scampered
awa
y from them.

Turning to the body, Samara watched as the gray fur slowly disappeared, revealing fair
skin
. As the wolf’s ears were replaced by human ears, Samara howled again. She’d felt the saliva cling to the inside of her mouth, as she felt the bile ris
ing in the back of her throat.

Lilly lay on
the ground, her body lifeless.

Shifting back into her
human
form
, Samara took a step closer to her. Just as she was about to lean over and feel for a pulse, sh
e felt someone grab her wrist.

“Don’t touch her,” Colby had instructed. “You’ll leave your DNA on her body. Just l
et her be. She’s already dead.”

“How do you know?” Samara had asked, her voice barely a whisper. At the time, she had thought that Colby was wrong, that there was no way he could know for sure that Lilly was gone wi
thout feeling for a heartbeat
, the way you would know if a human died
.
After all, werewolves were technically part human, weren’t they?

“Because that’s what happens when a wolf dies,” Colby had told her gently. “They return to their normal state . . . to t
heir human form.”

Staring at Lilly, Samara felt her eyes fill up with tears. Whirling around, she glanced in the direction Jason had gone in. The forest was silent. He was gone. As Samara considered shifting back into a wol
f so that she could go track him down
, Kyle shook his head. “Now’s not the time to get revenge, Sam
. We need to plan it out more.”

“Yeah, let’s go back to my house,” Colb
y had said
gently
, tug
ging at her arm, pulling her away so that she couldn’
t do any damage or incriminate
herself. Giving in, Samara allowed Colby and the other guys to whisk her away to the Jackson’s house.

On the way back to Colby’s house that night,
though,
Samara
had insisted on stopping at a pay phone to notify the police about Lilly’s death. Even though the guys in her pack were adamant about it because they were afraid that it would somehow link them to the death, Samara had insisted that it was the only way she wo
uld be able to sleep at night without
feeling guilty. None of them could possibly have known
that she wouldn’t be able to sleep any
way after what had happened,
but Samara
did find
some
peace in knowing that the death had at least been reported and that Lilly’s parents wouldn’t have to wonder if she would ever come home that night.

Kyle had been the one to make the phone call to the police, mostly because he was the only one who was willing to risk it since he had known Lilly so well, and partly because he was really good at changing his voice. For the phone call to the police, Kyle had put on a fake British accent, claiming that he had been hiking in the woods by Starlight La
ke and had come across a body.

When he slid back into the car, he’d said, “They don’t buy it. I can just tell they don’t.”
Of course they didn’t buy it. Who went hiking at night?
Samara knew
right
then and there that this was going to turn into a murder investigation. She only hoped that the police would somehow be able to link the crime to Jason
on their own
, but she had her doubts. How could they link the case to a human when he was in werewolf form
when he had killed her
? “Do werewolves ev
en have DNA?” Samara had asked.

“When we’re humans we have human DNA. When we’re i
n wolf form, we have animal DNA, which can’
t
be
linked to our human DNA,” Colby had replied knowingly. “Plus, no one would ever think to link wolf fur and paw prints t
o human hair or fingerprints.”

It figured that Jason would somehow be able to get away w
ith his crime.

When Samara and the guys had arrived at the
Jackson’s house, where she had stared at the ceiling in the guest bedroom, not allowing herself to
cry in front of any of them
. If she let it out in front of her new pack – the pack that she was positive she wanted to belong to now – they would think she was
weak . . . and who wanted a weakling on their pack?

Now, in the forest in front of the lil
ies with Luke, it didn’t matter. If she didn’t let her sorrow
out now, it would eat at her insides, threatening to boil over unexpectedly. Burying her head i
n Luke’s shoulder, Samara cried. Luke’s strong, warm hands stroking her back were the
only thing that comforted her as she let it all out.

On
that same
Wednesday afternoon
, which was
three days after Lilly had died, Samara found a police car park
ed in the driveway when she got home from getting a soda with Luke after their moment in the woods. She hoped that her eyes were no longer red and puffy. Not that it was a crime to cry.
Hopefully, the police wouldn’t find it suspicious if they did notice that she had been crying.

The cops hadn’t identified a cause of death and, from what Colby had told Samara, it was an unwritten rule that no one in the werew
olf world could go public with details about a murder that had taken place while they were in wolf form.
Samara didn’t agree with it, but if the details about these type of murders ever did come out, there would be the risk of people somehow finding out that werewolves existed – which would put all of them in danger. Even though Samara wished that she could break the rule and tell the police what she knew, she wasn’t about to be the one to open her mouth about it.

As Samara approached the car, Detective Scotts swung open his car door and stepped out onto the black pavement. “Samara? Do you have a few mi
nutes to speak with me again?”

Samara sighed. “Look, I’m not trying to sound uncooperative or anything, but you’ve already interviewed me three times
since Sunday
. Am I a suspect or something?” She had told him the same exact story all three times – that she hadn’t been anywhere near the woods that night.
After the fight,
they
had raced back to Colby’s house. Samara hadn’t wanted t
o leave Lilly, but the pack had convinced her that there was nothing they could do.

Detective Scotts ran a hand through his dirty blonde hair. “I’ve never said that you were a person of interest.” He paused. “Do
you think that you should be?”

Samara shook her head
, trying to keep a neutral face that wouldn’t make it obvious that she was lying
. She really wished that she could tell someone – anyone outside of the werewolf world – that she knew what had happened that night. It made her feel guilty knowing that Lilly’s parents had to wonder who had killed their daughter and that most of the town was under the impression that some crazy, deranged killer was out on the loose. At the same time, she knew she wasn’t
completely
lying to Detective Scotts. Jason was the one
who had killed Lilly, not her.

Realizing the detective wasn’t going to go away without talking to her first, she said, “It’s chilly out here. Let’s go inside.” Samara led him to the front door and, once they were in the living room, she motioned for him to take a seat on the sofa.
She sat down on the love seat
across from him
. “
What do you wa
nt to talk to me about today?”
She hoped that the frustration wasn’t too obvious in her voice.

Samara hadn’t been sure how the police had linked her to Lilly’s death, aside from the fact that she lived near Starlight Lake. They had investigated her neighbors, but it didn’t seem l
ike any of them were suspects.
At least, Samara was pr
e
tty sure that the
detective hadn’t questioned them again after their initial interviews.