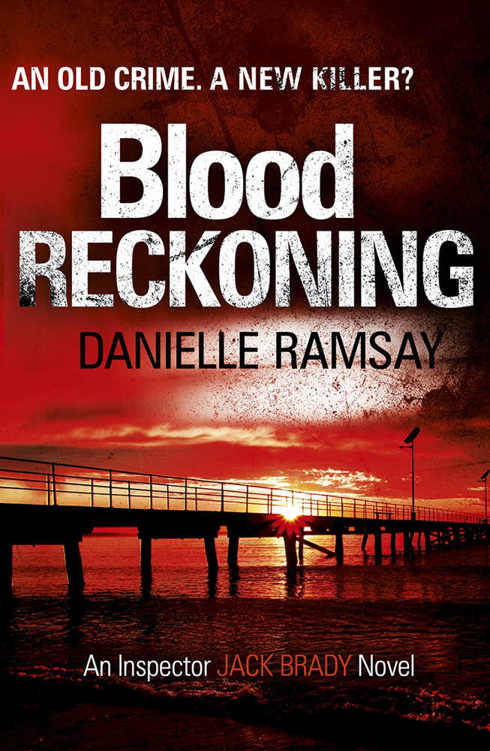 Danielle Ramsay is a proud Scot living in a small seaside town in north-east England. Always a storyteller, it was only after pursuing an academic career in literature that she found her place in life and began to write creatively full time after being shortlisted for the CWA Debut Dagger in 2009 and 2010. She is the author of three previous Jack Brady crime novels,
Blind Alley
,
Broken Silence
and
Vanishing Point
.

Always on the go, always passionate in what she is doing, Danielle fills her days with horse-riding, running and murder by proxy.

First published in Great Britain in 2015 by Mulholland Books

The right of Danielle Ramsay to be identified as the Author of the Work has been asserted by her in accordance with the Copyright, Designs and Patents Act 1988.

To the memory of Stan Ramsay.

‘No mortal can keep a secret. If his lips are silent, he chatters with his fingertips; betrayal oozes out of him at every pore.’

He checked the time on his mobile. He was starting to get pissed off now. No text – nothing.

He didn’t want to be here. Shaking his head, he tried to get rid of the doubts that had started to creep in. He couldn’t put his finger on what it was about tonight’s arrangements that made him feel so . . . so uneasy. They’d been meeting like this for months now. Discretion was everything. He more than anyone understood the need for anonymity, but he was still at a loss.

Why here, of all places?

He needed a drink. That would calm him down. Maybe it was just the fact that it was a different rendezvous than usual. Not as upmarket as he liked, and definitely not in a location he would have chosen. He was used to boutique hotels like Malmaison on Newcastle’s trendy quayside. This place couldn’t have been more different. It left him bemused. It added to the feeling that something about the set-up was wrong.

What’s taking you so long?

The silence was making him nervous. Jumpy even. His mobile suddenly bleeped. He had a text. Relief kicked in. But it was short-lived.

I’m really sorry. Please ring me. Please. Just give me a chance to make it right x

It was his girlfriend – again. She had been calling repeatedly, but he hadn’t answered. In this situation silence was the best tactic. He’d tell her that his phone had run out of power. An easy excuse that negated the need for elaborate lies that could trip him up.

Before he left he had deliberately started an argument. One that quickly escalated. His way of creating an ‘out’ for tonight. Reverse psychology. He had accused her of causing problems in their relationship. Started having a real go at her. Told her to be careful. That she was suffocating him. That she had turned into a controlling, suspicious, psycho bitch
.

Not that he felt good about it. She had every right to be paranoid. The regular late nights and furtive phone calls and texts were more than enough. When questioned about his unexplained absences, he would use the same old corny excuse every time – work. He was nearing the end of his Masters and had repeatedly used the pretext that he was working on his final dissertation. He was focused on his career and knew exactly where he wanted to be in ten years’ time. That took devotion. And not necessarily in the way she imagined.

He scrolled through his other messages in case he had missed one. Nothing. He had sent a text when he had checked into the hotel. Same as always. But this time there had been no reply. It didn’t make sense. The feeling of unease crept back.

For fuck’s sake, it’s Saturday night, Alex! What the hell are you doing in some crap seaside hotel waiting . . . waiting for what, exactly?

The answer wasn’t one he particularly liked
.

SEX – sordid and hard. The kind of sex that costs.

He checked his mobile again: nothing. He always got a text if there was a hold-up. A slither of fear edged its way in. What if someone had found out?

He contemplated texting but decided against it. He knew the rules; apart from when he checked in, texting was out. Suddenly his phone bleeped again. Hopeful, he read the new message.

Why won’t you answer your phone? Alex please. I love you x

He felt a sudden stab of shame. It quickly evaporated, replaced by irritation. Right now she was the least of his problems.

He got up off the bed and walked over to the window, trying to shake his darkening mood. The hotel room was pitifully pedestrian. Magnolia walls, beige carpet and cheap brown MDF furniture. It didn’t even have a mini-bar. The view did little to improve his spirits. It was dominated by a black expanse of sea. Bleak and miserable. Directly below was the Promenade, illuminated by a hazy yellow glow which added to the seediness of the place. Explosions of drunken laughter and taunts drifted up to the second floor.

It was a Saturday night – what else did he expect?

He watched as a group of loud-mouthed pissheads lurched past towards the lure of the gaudy lights and pulsating music that spoke of girls with glazed eyes, fake tans and even faker smiles. They all shared one discernible trait – young men looking for a good time. Regardless of the cost. Getting pissed and laid, in that order. Didn’t matter whether that included a night sobering up in the police cells. It was all part of the weekend. It would inevitably end with them getting in someone’s face. Fighting or shagging amounted to pretty much the same thing; they were too fucked to care. That was all they aspired to, unlike him. He had plans. Big plans. Tonight was just another step towards securing his career.

Alexander De Bernier looked at his stark reflection against the blackness of the night outside. He was naked – as instructed. Twenty-two years old and in his prime; six foot two, muscular, broad-shouldered, with well-defined abs leading down to a narrow waist and then . . . He looked down at himself. Pleasingly well-endowed, to say the least. He’d first realised his luck in the communal showers at his all-boys school. His deep, dark brown eyes lingered over his reflection. He smiled.

He had a lot to be proud of and he was damned sure he wasn’t going to put it to waste. He had often been accused of suffering from ‘only child syndrome’ – selfish, opinionated, egotistical and hugely narcissistic. But he would be the first to agree that he was all of the above.

And he detested being kept waiting.

As if on cue, the low, deep growl of an approaching car interrupted his thoughts. He watched as the white Audi R8 sports car pulled into the car park below.

Seconds later, a text arrived. Excitement coursed through him. He knew the game. Knew what was expected. But tonight was going to be different. He needed to talk. Straighten out what was in it for him. By now he would have expected more from these clandestine meetings. Sex first, of course. Then they would discuss his burgeoning career. After all, why have powerful contacts like this one and not use it?

He walked over to the king-size bed and picked up his phone.

THIRD RULE – FACE-DOWN READY TO BE BOUND AND GAGGED

He hesitated. This was a new trait, one he didn’t recognise. He had always been in control. The one who dominated.

He dispelled the thoughts hurtling through his mind.

You’re being ridiculous. What’s the worst that could happen?

He didn’t have time to analyse the new rules. The last thing he wanted to do was disappoint. He needed to get ready. He looked around the bland hotel room for a blindfold, spotted his tie hanging in the open wardrobe. Good enough.

He didn’t have to bother leaving the hotel door ajar. He had left the duplicate room key card hidden as usual. Discretion was crucial. Both of them had too much to lose.

He had done as instructed. He was blindfolded, prostrate on the bed with his arms obediently clasped behind his back – the willing victim.