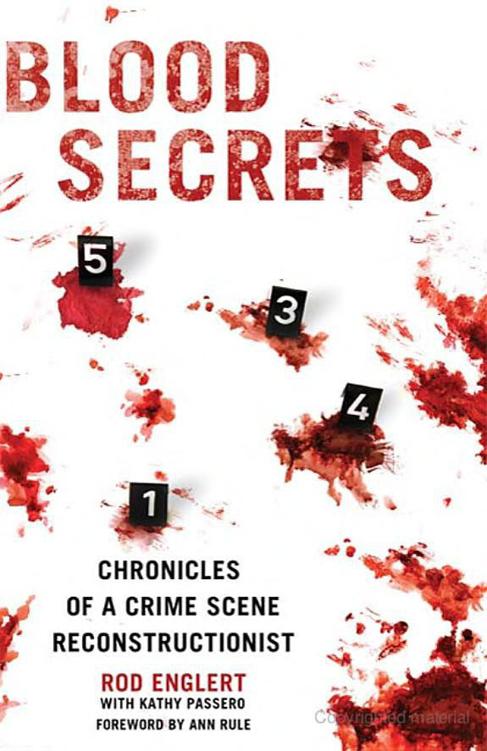 Chronicles of a Crime Scene Reconstructionist

Author’s Note:
Where indicated with an asterisk (*), pseudonyms have been used.

Editor’s Note:
In the world of professional crime solving, the proper terminology is “bloodspatter.” However, for the purposes of readability in this book, the term has been broken into two separate words and appears throughout the text as “blood spatter.”

2 From Rookie to Undercover Ace

4 Chronicles of a Crime Scene Reconstructionist

8 A World of Crime

Afterword: A Glimpse of the Future

S
EVERAL YEARS AGO, I
was invited to Aspen, Colorado, to present a seminar on serial killers to the Colorado Association of Sex Crimes Investigators. After driving from Denver, we arrived late in Aspen—too late to order room service or to find an open restaurant. I looked forward to a hearty breakfast, something you can usually count on at a law enforcement convention.

The next morning arrived and I was hungrier than ever. As I walked into the large room where speakers would lecture, one whole side was taken up by tables covered with spotless white tablecloths, tables laden with heated silver serving dishes. The menu was replete
with eggs, bacon, sausage, ham, hash browns, grits, pancakes, waffles, and fruit. One could not ask for a more appealing breakfast.

Alas, my good friend Rod Englert was slated as the first speaker of the day. I knew what that meant. Rod had decorated the other three walls of the room with his unique style. Life-size photos of recently and not so recently departed suicide and murder victims were everywhere I looked. In between, there were white sheets of paper with red splotches, sprays, droplets, and streaks. I thought I saw some jars with red fluid in them, but I didn’t look closely enough to determine what it was.

As the author of more than thirty books on actual murders and some fourteen hundred magazine articles, I have learned much from Rod about solving homicides with the “code” that is inherent in the life fluid of human beings. He has taught me and thousands of others about low-, medium-, and high-velocity blood spatter—enough so I can usually tell from photographs or viewing crime scenes whether a club or a bullet or a “transfer” left a particular pattern in scarlet.

Even so, as much as I admire his brilliance, I cannot eat and look at Rod Englert’s photos and charts at the same time. Several dozen detectives from all over Colorado and adjoining states, and a sprinkling of FBI special agents, filled their plates to overflowing and chewed away undeterred, listening avidly to his explanation of how the victims on the walls died.

Not me. My empty stomach could barely manage black coffee and ice water. Despite my queasiness, I learned a great deal at that “breakfast seminar.” After thirty years of researching often grisly crimes, I suppose I should be inured to the shock of what violence can do to the human body. But I’m not.

Rod Englert is an uncommonly kind man, but he has transcended his own distress and sorrow at man’s (or woman’s) inhumanity to
man to offer remarkable insights into what the dead can tell us, even after they can no longer speak.

Blood Secrets
is a fascinating book on many levels. It is autobiographical, showing the fulfillment of a small Texas boy’s dreams to be a police officer through his rookie years, his close calls, his mistakes—which he admits freely—to his years as a homicide detective and now to his career as one of the foremost experts in the world on the silent stories written in blood.

Most of us involved in the circle of forensic science experts know one another, even though we come from many different regions. We are a motley crew, a fraternity who studies the blackest side of human nature and manages to find justice for victims of crime and the truth for their survivors. In our group are forensic anthropologists (identification by the derivation of bone structure), forensic odontologists (identification by teeth), medical examiners, psychological profilers, fingerprint experts, fiber and hair experts, DNA experts, tool mark experts, ballistic experts, forensic entomologists (bug experts), forensic geologists (soil and stone identification), forensic botanists, and all manner of skilled criminalists who now solve baffling crimes in ways no one ever imagined even a few de cades ago.

I often think that anyone contemplating the commission of a crime would be frightened away if they knew how much evidence they leave behind them—all unaware.

Still, contrary to most laymen’s belief, there
is
such a thing as a perfect murder, thousands of them. And an eyewitness is
not
necessarily the best way for a prosecutor to win a case. A jury benefits most by being able to see, feel, smell, and examine physical evidence. And it takes skilled forensic experts like Rod Englert to winnow out the truth.

When I first met Rod in the 1970s, he had recently become a homicide detective with the Multnomah County Sheriff’s Office in Portland,
Oregon. About a dozen and a half detectives and a CSI team were crowded into an upper floor of a rather dingy building, their desks just far enough apart so they could move the chairs back and get up from time to time.

Along with his partner, Joe Woods, Rod Englert was solving a number of bizarre and difficult murder cases. At the time, I was a “stringer” covering the Northwest for
True Detective
magazine and her six sister fact-detective magazines.

I made $200 an article and $12.50 for every photograph I sent in to accompany the text. I was raising four children on my own after their father died at forty-three, and the Multnomah County detectives were as nice to me as Seattle investigators were and agreed to let me interview them about cases that had been adjudicated—either in a trial or through a confession. They knew that my career, somewhat rare for a female, was supporting my family. Rod, Joe, Blackie Yazzolino, Stu Wells, Bob Walliker, Bobby Graham, Neil McCarthy, John Kerslake, and Lieutenant Jim Purcell had an enviable record of convictions.

In
Blood Secrets
, Rod Englert recalls many of the cases he participated in closing successfully in the greater Portland area. I recognize a lot of them, and they are as fascinating as they were back in the seventies when we first met. The sheriff’s homicide unit in Multnomah County was one of my regular stops. While I was researching murder cases, I was learning. And while Rod was solving those cases, he was learning about the mysteries that could be solved with the blood of victims. And, sometimes, by the blood of killers.

In my first three published books, there were aspects that Rod Englert had handled. It was chance, probably, but he had his investigational fingers in multiple pies—or, more accurately, any number of homicidal mysteries. Sometimes I teased him, saying he would probably appear in every book I ever wrote. In the end, of course, I began
to write about cases all over America, and Rod’s expertise in blood spatter identification made him in demand thousands of miles away from my killers’ stalking areas.

Now, when we run into each other, it is at one training seminar or another. In Aspen, the hotel where he and I spoke on our particular subjects was in the shadow of the Wildwood Inn, where one of Ted Bundy’s victims—Caryn Campbell—had vanished two de cades before. I can’t recall how many conferences there have been, but there have been many, and I look forward to seeing Rod and his wife, Penny, to catch up.

Usually, we get an honorarium and travel expenses, and on occasion, Rod and I meet up to speak for nothing at all to high school students who aspire to become members of law enforcement. Rod has always had time to work with youth groups.

Gradually, Rod Englert’s name began to appear at the top of the list of blood spatter experts in America. At first, it was surprising to watch television news shows and see Rod testifying at high-profile trials. Within a few years, it became commonplace. Until I read the galleys of
Blood Secrets
, I really didn’t know how many celebrity trials Rod was part of. He gives the reader an insider’s peek at what went on behind the scenes of a number of these investigations and trials.

I always encouraged Rod to write a book. He worked with author Kathy Passero, whose seamless style meshes perfectly with the subject, and the team has produced a worthy book, unique and captivating.

One would think that after spending more than half my life writing about homicide cases, I wouldn’t enjoy reading a book on bodies, murder, and blood. But I did. This book is instructional for both detectives and crime aficionados. I thought I was well versed in the meaning of blood trails and marks, but I learned at least three things in this book about blood that I didn’t know before.

Blood Secrets
is much more than a textbook for homicide investigators; it is an absorbing story of the journey of a barefoot boy who picked cotton in Texas to his discovery of a forensic science that is partly art, partly science, and partly gut instinct.

I highly recommend this book!

Ann Rule is a former Seattle police officer and the author of thirty
New York Times
Bestsellers on true crime cases—from
The Stranger Beside Me
to her newest,
But I Trusted You
.

Eternal Horizon: The Chronicle of Vincent Saturn (Eternal Horizon: A Star Saga Book 1) by David Roman
The Mystery of the Mystery Meat by Chris P. Flesh
Dope Sick by Walter Dean Myers
In the Dark by Taylor, Melody
Red on Red by Edward Conlon
The Work and the Glory by Gerald N. Lund
Time Untime by Sherrilyn Kenyon
Mike, Mike & Me by Wendy Markham
Sullivan Saga 1: Sullivan's War by Michael Rose
Left by Shyla Colt