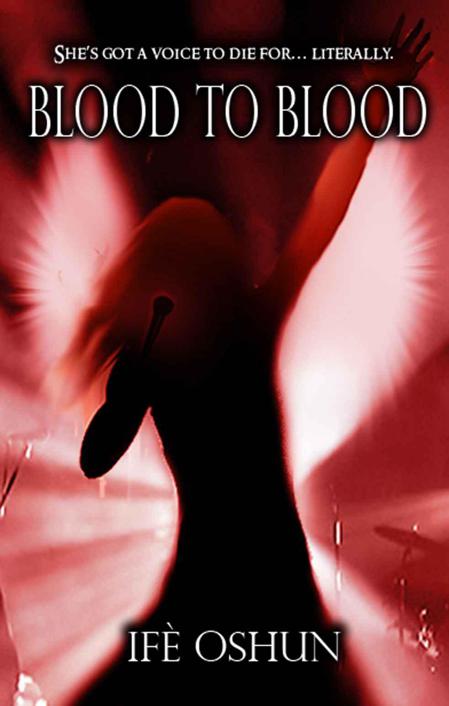 To my mother, Sybil.

Continue on your journey
in Peace, Light and Love

7.
THE BABY’S GROWING UP

13.
GETTING THE KINKS OUT

T
he Change was starting.

A tingle coursed through my
veins like the first flutterings of a new butterfly’s wings, and I distinctly
heard the heartbeats of everyone in the room.

Part of me was excited. After
all, I’d soon be full-grown Shimshana. But then another part was scared… How
exactly would The Change affect me? More importantly, would I still be able to
sing afterwards?

The tingling faded into the
background, though, as I watched the number of comments explode.
Mom’s gonna
kill me
, I thought.

We (Kat Trio) were about to
sign our very first album deal, and somehow word had already gotten out on
Facebook. Pivoting the laptop on the smooth tabletop, I showed my profile page
to the others in the sun-filled conference room.

My group mates, Julietta and
LaLa; our manager, Nina; and the label’s A&R Director—um, was his
name Raj?—were too preoccupied to look up.

“Seven hundred and
eighty-four friend requests,” I said. My mouth was suddenly parched, despite
the lemon wedge I’d been sucking.

LaLa mumbled something
undecipherable while painstakingly inscribing lyrics on her striped sleeve.
Julietta popped bubblegum and barely looked up from texting one of her
boyfriends. “A step up from the nine friends you have now,” she quipped.

Raj smiled and passed Nina
copies of the contract. “Might as well get used to it, ladies,” he responded in
his smooth London/East Indian accent. At that moment, he reminded me of an
antsy Las Vegas dealer. You know, the type you see in the movies; twitching
right before someone at the blackjack table is dragged into the backroom to get
beat down for cheating the house. Or maybe the twitch I thought I saw in his
grin was just a projection of my own guilt. After all, I was the one cheating
the house. I was breaking my family’s number one, all-time rule: stay
low-profile. And I was the one who was lying. I gulped down what felt like a
cotton ball forming in my throat.

Nina finally looked up from
signing the contracts. “Your turn,” she said to us. “Just print your names.”
Pens began signing, and papers glided like flattened sharks back and forth
across the table amidst a sea of water bottles, cough drops, and hot cups of
tea until all the lines were signed. The contracts’ final destination was the
notary public at the end of the table who verified the info and stamped them
with her seal. Nina and Raj shook hands before she turned and spread her
manicured fingers toward us. “Congrats, girls,” she said. “You’ve just signed a
deal with House Quake.”

I didn’t know whether to
laugh, cry, or scream, and obviously, neither did Jules and LaLa. Despite just
getting what we had worked for and dreamed of for the past three years, we sat
mutely for a moment, staring at one another in the wake of Nina’s words.

None of us girls had typical
sixteen year-old lives. Instead of fashion, boys, and reality TV we had
writing, rehearsing, and performing wherever we could. Talent shows, festivals,
and church were the only dates we had, and over the past year, any gig that I
could sneak behind my parents’ backs was another notch in our collective belt.
We were on a mission. We wanted to do this as a career. And everybody knew that
in order to make it, you had to grab all the opportunities you could while you
were still young. In my case, my life was even less typical and there was no
point in waiting. Singing was my heart, my soul, and my waking dream. It was
the only thing I could ever imagine doing. Forever.

Kat Trio was a hobby until we
met Nina, who told us she could take us far if we were serious. Soon, we
entered and won NE Rising Stars, an annual showcase of the best talent from
across the Northeast. The prize package (photo shoot, demo CD, and potential
signing with a mid-sized record company) was so publicized, my parents refused
to allow me to interview with the label. They even made me promise to stop
performing. I lied and told them I would.

I apologized to the girls,
telling them that I couldn’t meet with the label because Mom and Dad wanted me
to focus on my double English classes at school. Not a
total
lie, since
my parents are really big on education. Between the two of them, they have
hundreds of degrees in almost as many languages and or dialects, gathering dust
in a secret room in the basement. But to be completely honest, my parents were
definitively against
any
member of the family being in the public
spotlight. Even if it was the only yet-to-turn-immortal member. Me. Our
peaceful existence depended on the ability to blend into the mortal world.
Attracting national attention to myself would defeat the “blending mandate,” so
this record deal and sudden fame stuff was a serious no-no.

Even worse, Mom and Dad
didn’t know that I’d broken my promise and was still doing gigs. Every night
the girls and I spent gigging was a night when my parents thought I was
studying at either LaLa or Jules’ house. Now the record deal would expose me as
a scheming traitor, and I was sure not even The Change and the immortality it
would bring could save me from Mom’s wrath. And if (a very big if) Mom didn’t
kill me once the truth came out, she would surely incinerate me into a small
gray mound of breathable dust after I gathered up the guts to tell her and Dad
that I was considering dropping out of high school to make an album.

So instead of laughing,
crying or even screaming, I just sat there, pen still in my
hand—slack-jawed with the realization the contract I’d just signed was
really my own death warrant.

J
ulietta snapped me out of my stupor.
“Still haven’t told your parents, huh?” she whispered conspiratorially after a
quick peek at Nina. Our manager didn’t know the “parental” signature on my
contract was forged.

I felt the urge to run like
heck. “Bathroom,” I answered.

Once there, I checked out my
reflection in the large vanity mirror and wished I would change into an
immortal before breaking the news to the family later on that night. I was
still in the vulnerable part of my existence—childhood—but my
pending maturity might give me a chance at surviving Mom’s red rage.

Immortal kids are identical
to mortal kids when it comes to physical development. Then somewhere between
the ages of sixteen to eighteen, our aging slows (and according to Mom, eventually
stops about a thousand years later) as our immortality, complete with unique
abilities, personality, blah, blah, blah come online.

Would The Change make my face
look different? My eyes were a brighter brown than usual (but that probably was
from the excitement of the record deal), and underneath the surface of my skin
(my sister calls it “flawless milk chocolate”) the blood rushed and gave me the
usual mortal flush. My hair looked the same, too: a barely controlled mass.
Today, I’d managed to weave it into a single braid that swung between my
shoulder blades. The T-shirt, jeans, and pink suede boots fit the way they did
the day before.

So, okay, I looked the same.
But I didn't
feel
the same. Something was different. “Your dream's
coming true,” I told my reflection. “Why can’t you just relax for once and
enjoy this?” I held my breath. And waited.

As usual, after a moment of
silence, my reflection took on a life of its own. It peered from one side of
the mirror to the other as if making sure we were alone. I giggled and wondered
for the millionth time what the girls would think if they ever saw this.

Reflection, hands on hips,
glared at me. “You can’t relax because you’re a dumbass.”

Before I could shoot back a
retort, the bathroom door flew open and in walked a no-nonsense-looking exec
type. “Hi!” I blurted, praying she wouldn’t spot my errant image in the mirror.
Luckily, she looked at me like I was a nutcase and headed straight into a
stall.

Exhaling, I snapped my
fingers once and Reflection immediately reverted back to an
ordinary...reflection. A reflection of a liar, nervously chewing her inner
cheek and going against everything her parents taught her.

Back in the conference room,
Raj was gone and Julietta was doing a seated happy dance in her chair.
Magenta-colored hair and gold hoop earrings bounced around her face. “Giiirrrl,
guess what’s happening!” she squealed. She stood up to do her signature step:
two quick steps to the right, two to the left, small hop forward, finish with
outstretched jazz hands. “Starving Artists just canceled their gig at the
Garden.” Her fingers still danced in the air. “We might be able to squeeze in
there before the other opening acts and do a song!”

Starving Artists was voted
one of the “Ones To Watch” in
Frunt
magazine's highly touted year-end
issue. They were slated to open for international superstar Charmain, whose
single “Tell It Like It Was” was number one on the chart for the eighth week in
a row and breaking all kinds of download sales records.

“Why would they cancel?” I
wondered aloud.

LaLa scratched her head under
her Red Sox cap. “Giiirrrl, who cares,” she said. “We are sooo in. You know
Nina never tells us anything until she's almost one hundred percent sure.” Her
eyebrows threatened to mate with her hairline as she cocked her head in our
manager’s direction. “She’s on the phone with them right now.”