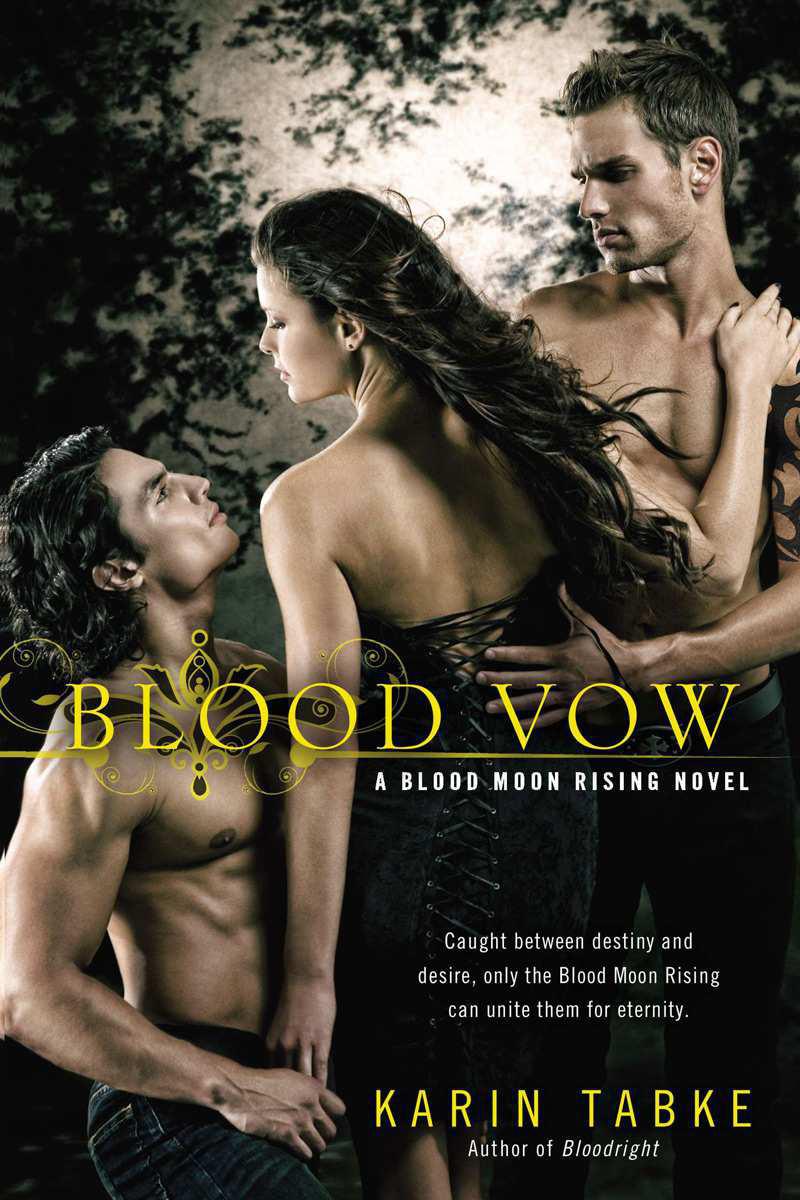 MEN OUT OF UNIFORM

(WITH MAYA BANKS AND SYLVIA DAY)

HEAT and the HEAT design are trademarks of Penguin Group (USA) Inc.

To my readers, thank you for hanging in there with me on this wild and wonderful ride!

And to those hearts who love two . . . thank you for inspiring me.

STUNNED, LUCIEN AND Rafael watched helplessly as the traitorous immortal wolf Fenrir vanished in midair, taking Falon with him. No amount of horrified staring made them reappear, and long minutes later Rafe forced himself to look at his brother. Just behind Lucien stood their equally stunned packs, Vulkasin and Mondragon. With them stood Anja, Rafe’s chosen one. Or rather, the female Rafe had chosen to mark in order to save Falon’s life. The pale Siberian beauty stood tall and regal, a glorious smile splitting her face.

Rafe looked past her gloating and back to his brother. Deathly pale, Lucien’s wide eyes stared into the night sky as if he still hoped Falon would magically materialize before them. Rafe shivered hard then, remarkably, even feeling a twinge of compassion for his brother.

Which was beyond comprehension considering what Lucien had done. Taking Falon as his own, marking her when he knew how Rafael loved her. It didn’t matter that the Blood Law was on his brother’s side at the time. Now, it meant shit. Falon was his! As she always had been and would always be.

Because even after giving her up, even after marking Anja, Rafe had never stopped loving Falon. And now, his beloved was gone!
Vanished.
Bone-numbing fear settled deep within him.

Lucien’s long mournful howl shivered through Rafe. Instinctively, Rafe answered his brother’s desperate cry, calling to Falon who, if she were to survive, would be living a nightmare as the captive of the traitorous Fenrir. The wolf who, because he had been rejected by his parents and his pack nearly one thousand years ago, turned to witches and black magic and teamed up with the Slayers to kill his own kind. Now, with the Blood Moon rising imminent, that accursed wolf wanted Falon as his chosen one to set the foundation for his dynasty.

It would not happen!

As Rafe’s howl dwindled to nothing more than a deep rumble in his chest, he struggled for control. For insight. For a way to rescue Falon. For a way to bring her back to him, where she belonged.

Falon!
Rafe called to her with his mind, at the same time as Lucien.

Help me!
she cried.

Where are you?
Lucien desperately asked.

I don’t know
. Her strangled voice faded into the night.

I
will
find you!
Rafael vowed.

“Gather the swords!” Lucien commanded as he strapped his own weapon to his back. “We’re going hunting!”

Rafe growled, not in disagreement, but furious desperation. “Your lie caused this.” Rafe sneered in his brother’s face. “Because you refused to believe that your chosen one was Slayer, Falon is gone.”

Lucien shook his head. “Regardless of the past, Brother, this was destined to happen.”

“I would not have marked Anja,” Rafe hissed. He moved in toe to toe with his brother. “You would not have had any right to, Falon!” Rafe lowered his voice to a deadly whisper. “I swear to every god that exists, if Falon dies because of this, I will skin you alive.”

Lucien shoved his brother away. “We can argue whose fault it is when she’s safe. But one thing we won’t be arguing about is that she’s mine. Remember, I gave her the choice to stay with me or return to you. She chose
me
.”

He strode past Rafe to the open container, housing the crates of poison swords they had come to retrieve to transport north to the final battleground.

Six weeks from now, the Blood Moon would rise, and beneath it the entire Lycan nation would arm themselves with these swords against their mortal enemy, Slayers. Only one faction would survive. The swords would stack the odds in the Lycan’s favor. One nick from the poison metal would render a Slayer helpless in less than a minute, making the delivery of the true death, decapitation, a breeze.

“I’m not waiting on these swords,” Rafael said as he strapped his double scabbards on and sheathed his own swords. They thrummed with vitality, eager to kill. Like Rafe, his swords craved Slayer blood. “Not while Falon’s scent is fresh.”

Lucien stopped in his tracks and lowered the end of one of the heavy crates. “We go together.”

“I’m going with you!” Anja said quietly but firmly from behind Rafe.

He turned, irritated that she would insert herself in this matter but could he blame her? He was going after the woman he loved. Anja knew there was no threat or amount of begging she could do that would keep him from going after Falon. She had no choice but to go along with him, no doubt hoping that some harm would come to Falon and with her gone, Rafe would finally learn to love Anja. But as he’d told her from the beginning, it would never happen. Rafe would love only Falon. No woman could replace the space she occupied in his heart. Dead or alive, Falon was the only woman who would ever hold his heart and soul in her hands.

Roughly, Rafe ran his fingers through his hair and begrudgingly nodded. He had no choice. While he had no love for Anja, she was, for the moment, still his chosen one. For Falon’s life, Rafe had promised his brother he would mark another before the next full moon. Honor bound, he had. He regretted every moment since. Except that Falon’s life had been spared.

He nodded again and turned to the packs Vulkasin and Mondragon. Once a united powerful pack, so powerful nothing but Slayer black magic could harm them, and now? For the past sixteen years they were split straight down the middle because Lucien had never believed that Rafe slew Lucien’s chosen one because she was a Slayer. He believed Rafe had slain her for personal gain, to control the pack, not co-alpha as they had done. Their mother’s people, Mondragon, had followed Lucien, while his father’s people, Vulkasin, stayed with Rafe. No one had benefited from the split. They were stronger as one united pack.

Now that the truth was out that Mara was a Slayer and not a mere human as Lucien was so sure she was, it should heal the aching wound of the blood feud.

Rafael shook his head. If anything, the packs would fight over Falon. When Mara had returned from the dead, and shown herself as the Slayer she was, Lucien did what Rafe had thought he had done sixteen years ago. He killed her. She died a true death. So the proof of what Rafael claimed all those years ago voided the Council’s verdict, giving Falon, his chosen one, to Lucien as replacement for the one Rafael took.

He should not have been shocked when Lucien admitted Mara was a Slayer. Shock aside, Rafe had been infused with so many emotions, predominantly fury at his brother for refusing to see what he knew to be the truth about Mara. But the Blood Law prevailed: an eye for an eye, and Rafe had been forced to give his chosen one to his brother in exchange for the one he took from Lucien. It had been a lie! And because of it, Falon had not only laid with his brother, but allowed his mark and returned it. Damn it all. They were as separated now as the day Lucien rode off with her barely alive in his arms. Rafe swiped his hand across his face. To save Falon’s life, Rafe swore to Lucien he would mark another before the full moon. And so he had just this day. Had he waited—Fuck! Had he just waited . . .

Unease shifted through Rafe. With the proof that Mara was a Slayer, and a Clan Corbet Slayer—the worst of the worst—Lucien had violated a cardinal Blood Law. He’d lain with a Slayer, the act punishable by death. It would not matter that the bitch had used her black magic to trick him. Lucien was about to mark her when Rafe killed her. Lucien would have brought her into the pack. She would have bred half-breeds and destroyed them all from the inside out.

Rafe shook his head not wanting to think of the consequences of Lucien’s foolhardy choices. He thought of Falon, of her in his arms again. His blood warmed.

Words Without Music: A Memoir by Philip Glass
Get Dirty by Gretchen McNeil
Oblivion (The Watcher Chronicles #3) by S.J. West
Fallen Angel of Mine by John Corwin
Mutiny: The True Events That Inspired The Hunt For Red October by Boris Gindin, David Hagberg
Twice Loved (copy2) by LaVyrle Spencer
Sudden Prey by John Sandford
John the Revelator by Peter Murphy
Tratado de ateología by Michel Onfray
Further Confessions of a Slightly Neurotic Hitwoman by Jb Lynn