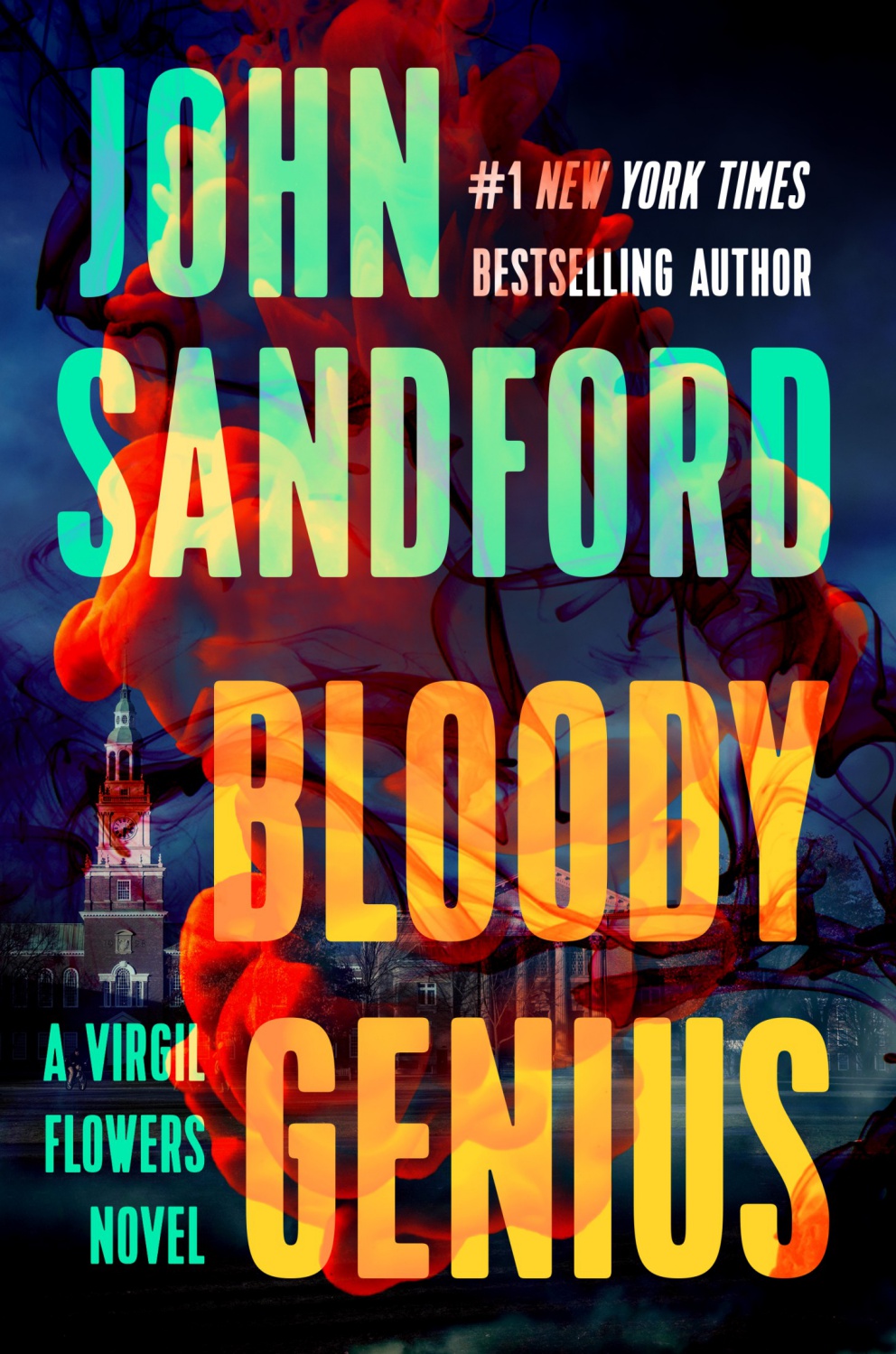 Dark of the Moon

BY JOHN SANDFORD AND MICHELE COOK 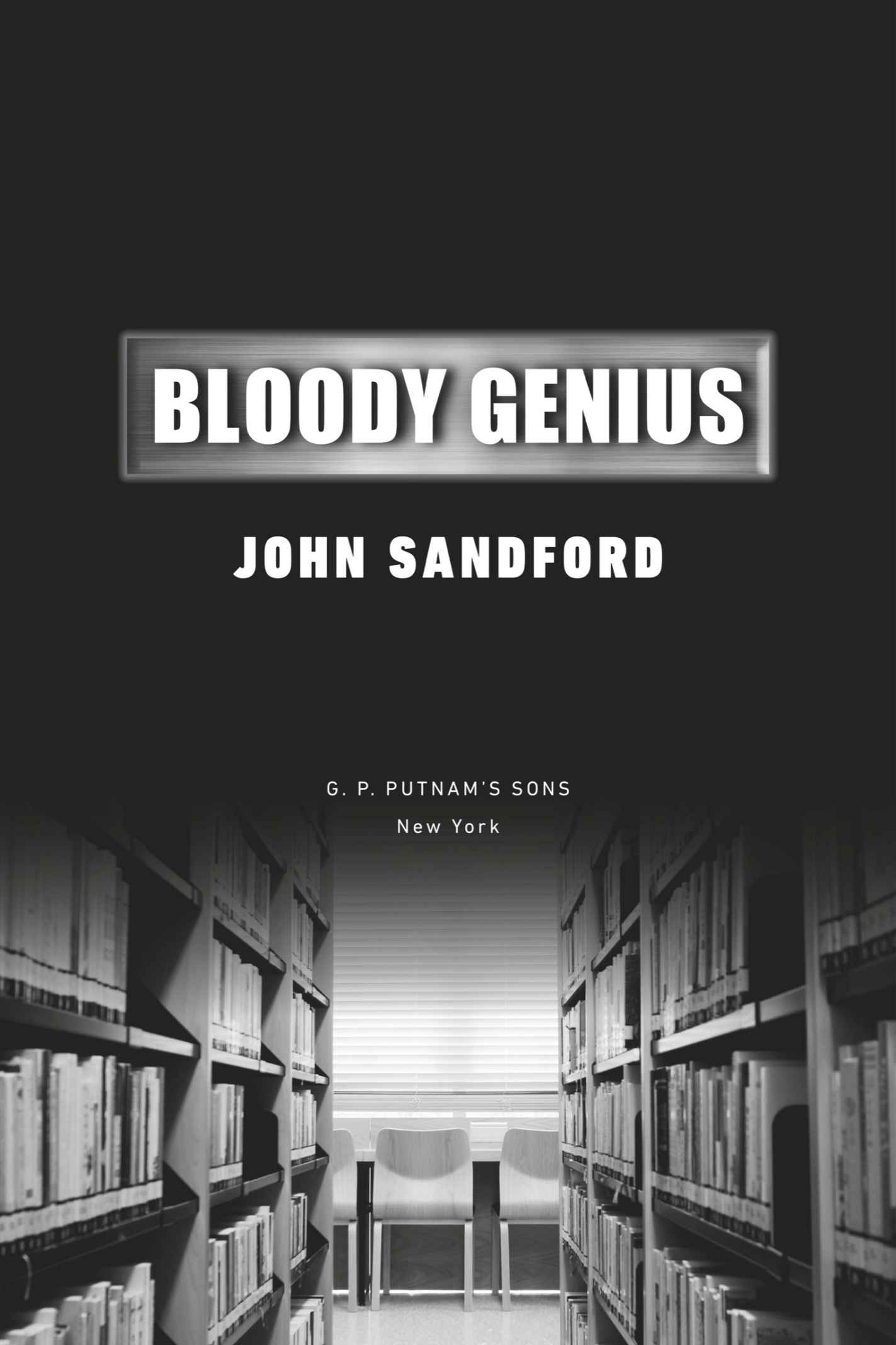 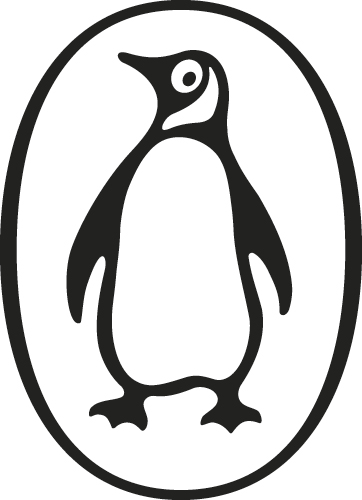 Barthelemy Quill led his companion through the murk and up the library stairs toward his personal study carrel. Though Quill was normally restrained to the point of rigor mortis, she could hear him breathing, quick breaths, excited. They’d been there before, and the woman found the experience both weird and interesting. She was a step behind him, and lower, and she reached out and stroked his thigh.

But at the top of the stairs, Quill put out a hand, pressing it back against her chest, and whispered, “Shh. There’s a light.”

The library was never entirely dark, not even in the middle of the night, but there’d never before been a moving light. She could see one now, no brighter than an iPhone, dancing like a ghost through the bookshelves.

Not a security guard. It
was
an iPhone, she thought. Not the flashlight, but the much weaker screen light.

Quill moved away from her and closer to the light—he was
wearing gray dress slacks, a gray knit dress shirt, and a black sport coat, so he was basically invisible in the dark. The woman felt a chill crawl up her arms and she stepped sideways into the book stacks. She’d learned well the lesson of trusting her instincts about trouble. She turned a corner on one of the stacks and crouched, listening in the silence.

Then a wet
Whack!
And, after a second, another.
Whack!
The sound was heavy and violent, as if delivered with a crowbar. The whacks were followed by a couple of bumps. And not another word from Quill.

The woman crunched herself up, made herself smaller, opened her mouth wide to silence her breathing, a trick she’d learned in another life while taking singing lessons. Like Quill, she’d dressed in dark clothing, as their entry into the library was unauthorized and possibly illegal. Before this moment, that had added another thrill to their clandestine meetings.

Something terrible had happened, she thought. After the whacks and subsequent bumps, there was a deep silence, as though the iPhone user were listening.

That was followed by shuffling noises, more bumps, a door closed and a locked turned, and then the weak iPhone light reappeared. She never saw the person with the phone but kept her arms over her face and her head down: faces shine in the dark, and eyes are attracted to eyes. She heard light footsteps fading away, risked a look up and saw the iPhone light disappearing around the corner toward the stairs.

The killer was just as stunned. Quill had come out of nowhere, as the killer stood by the open carrel door, laptop in hand. Quill’s face had been twisted with anger. He’d shouted, “Hey! Hey!” and something else, then, “I’m calling the police!”

Quill’d turned away, and, without thinking, panicking, the killer had lifted the laptop computer and brought it down on Quill’s head.

After the first blow, Quill had said, “Ah!” and gone down, and his forehead had hit the edge of the carrel desk and his head had turned. His gray eyes jerked to the assailant, but had already begun to dim, as he sank to his hands and knees. The killer swung the notebook again and this time Quill went flat on the floor.

The DreamBook Power P87 made an excellent weapon, not because of its Intel Xeon i7 processor, or its 64 gigs of RAM, or its high-definition display, but because it weighed more than twelve pounds and had sharp corners.

When the killer sank the computer into the back of Quill’s head, the professor smacked the desk with his forehead, his head turned, and his eyes twisted toward his assailant, and he dropped to his hands and knees like a poleaxed ox, if oxen have hands and knees.

A blow followed, a downward chop like that of a guillotine blade. The later autopsy suggested the first blow had been
sufficient enough to kill, if the assailant had been willing to wait a minute. He hadn’t.

The second impact certainly finished the job, and Quill lay sprawled across the floor and partially under the carrel desk, leaking both blood and cerebrospinal fluid. Quill never felt much pain, only an awareness of the blows and his beginning to fall. The lights went out, and he dropped into a darkness deeper than any sleep.

The library carrel had been his own personal cubbyhole, renewed semester by semester over the years. Strictly speaking, that shouldn’t have been the case, but Quill was rich and handsome and famous for his research into innovative therapies for spinal nerve injuries. So he got by with it. And it had become a go-to place for his late-night sexual assignations, away from all eyes.

The killer had a thousand thoughts raging through his head. Near the top, however, was: Get out! And: DNA! And: Fingerprints!

The library was nearly silent, broken only by the vague clicks and hums of any building at night with heaters and fans. The killer stood listening, then looked down at the body, licked his lips once, thinking. The laptop came with a soft plastic cover. He used it to wrap one of his hands and then dragged Quill’s leg from the doorway into the carrel, where, with the door closed, the body couldn’t be easily seen through the narrow translucent window.

His heart was pumping hard, he was breathing like a steam engine. He tried to calm himself, took a moment, stepped on something. The fob to Quill’s BMW lay on the floor where he’d dropped it, along with his cell phone. The killer picked up the cell, the keys, and the murder weapon, took another moment to listen. As
expected, the library was empty and dead silent: it closed at six o’clock, and he’d murdered Quill at the stroke of midnight.

The killer left the carrel at three minutes after midnight, pulled his black ball cap farther down over his eyes and tilted his head down to defeat any cameras. He locked the carrel door and started toward the stairs. The hair on the back of his neck suddenly bristled, like from the chill you’d get walking past a cemetery. He stopped. Was he alone? He listened, heard nothing. He walked slowly and quietly down the stairs to the first floor, creeping through it on his soft-soled running shoes, and out the door.

The river was right there. He went to the walkway running alongside it, stopped under a light to separate the professor’s keys from their fob and threw the fob in the river. The keys went in his pocket; he might find a use for them.

He continued across a bridge to the other side, saw no one. He stopped to put the computer and its soft cover in his backpack. The cell phone went into a “Mission Darkness” Faraday bag with a see-through window, along with his own. Quill had begun making a call to 911 when he was killed, so the killer had access to the phone’s operation and could keep it working with the occasional poke.

Back inside the library, Quill’s companion waited, frozen in place, for what seemed like hours—maybe ten minutes. After the iPhone light disappeared, she had not heard another thing.

Taking a chance, she dug silently in her purse and found the switchblade she’d purchased in Iowa, where they were legal, as personal protection. She wrapped the knife in the tail of her jacket and pushed the button that popped open the razor-sharp
four-and-seven-eighths-inch serrated blade, the mechanical unlatching muffled by the cloth.

She listened for another moment, then crawled down the aisle between the book stacks, got to her knees, then to her feet, and slipped over to the carrel. The door had a small, vertical-slit window, but with translucent glass.

She muttered, “Shit,” and waited, and waited, listening, tried the door, but it was locked. She turned on her iPhone’s flashlight and directed it down through the window but couldn’t see anything at all through the cloudy pane. Nothing was moving inside.

Quill, she thought, might be dead. He was probably badly hurt, at the least. She should call the police; but she wasn’t the type.

The thought held her for a moment. She didn’t owe Quill. He’d brought her into this. If he was still alive, and survived, she could tell him that she ran away and never knew that he’d been hurt.

The decision made, she turned off the light and slipped through the library, her lips moving in a prayer that wasn’t a prayer, because she didn’t know any, but simply a
Please! Please! Please!
addressed to any god who might be tuned in. She made it down the stairs and out into the river air, the Mississippi curling away beneath the bridge with anything but innocence: it had seen more murders than any single man or woman ever would.

A half block from the library, the woman folded the knife but kept it in her hand, her thumb on the spring release. On the far side of the bridge, she was swallowed up by the night.

Because he was murdered on a Friday night and had no firm appointments over the weekend, and missed only one day at the
lab, Quill’s body wasn’t found until Tuesday, when an untoward odor began leaking under the carrel’s locked door.

Inquiries were made, a second key was found, the door was opened, the cops were called.

Quill had lived alone since his third wife moved out. Neither of his first two wives, nor his estranged third, made any secret of the fact that they thoroughly disliked him.

A two-week investigation produced baffled cops. The cops didn’t think they were baffled—not yet, anyway—but the
Star Tribune
and local television stations agreed that they were. And who do you believe, the cops or the mainstream media?

When no suspect had been produced after two weeks, Quill’s well-connected sister, co-heir to their father’s wildly successful company, Quill Micro-Sprockets, called her old friend and a major political donee, the governor of Minnesota.

At the end of the daisy chain was a Flowers.

Dead Men's Tales (Tales of the Brass Griffin Book 5) by C. B. Ash
My Mother's Body by Marge Piercy
Too Far Gone (In Too Deep #2) by Stella Rhys
The Third Plate: Field Notes on the Future of Food by Dan Barber
Fat Pat by Rex Bromfield
Blown for Good Behind the Iron Curtain of Scientology by Marc Headley
The Sandman and the War of Dreams by William Joyce
All of Us and Everything by Bridget Asher
Hell's Belle by Karen Greco
Wetware by Craig Nova