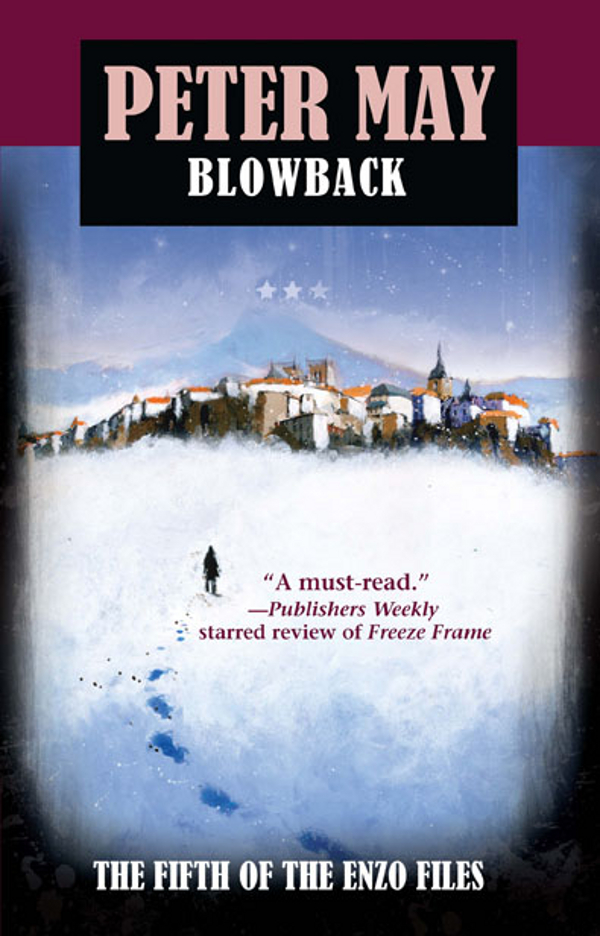 The Fifth of the Enzo Files

This book is dedicated to the memory of my friend and mentor,
Tom Wright

I would like to offer my grateful thanks to those who gave so generously of their time and expertise during my researches for “Blowback”. In particular, I’d like to express my gratitude to
Michel Bras
, three-star Michelin chef and owner of the “eighth best restaurant in the world”, for giving me unfettered access to his kitchen, and feeding me some of the best food I have ever tasted; pathologist
Steven C. Campman, M.D.
, Medical Examiner, San Diego, California;
Grant Fry
, Lead Forensic Specialist, Orange County Sheriff-Coroner Department, California;
Patrick Nolan
, Ponderosa Kennels, Maryland, USA;
Linda Sperco
, Blue Ribbon Dog Sports Coaching, New Jersey, USA;
NDZ
;
Bob Dartnel
, managing director, Foster & Freeman Ltd., Evesham, England;
Karteek Alahari
, Oxford Brookes University, England; and
John Hally
, my brother-in-law, and former pupil of Hutchesons’ Grammar School, now resident in upstate New York, USA. I would also like to offer my thanks and congratulations to
Rudolph Chelminski
for his excellent book,
“The Perfectionist”
, on the death of Bernard Loiseau. I found it to be both an inspiration and an indispensible reference book on the history of modern French cuisine.

Dominique slipped the two wooden stakes under her arm and zipped her standard issue waterproof jacket up to the neck. It was still winter cold. Wet now, although the snow remained thick on distant volcanic peaks. She pushed off up the track through the trees. Pine needles lay thick in the mud, the smell of them filling damp air, a powerful, bitter scent of decay, like the smell of death that awaited her at the end of her climb. She felt the chill anticipation of it in her bones.

Beyond the treeline the hill rose steeply. The little track, bounded by a crumbling dry stone wall, followed its ragged contour before turning sharply to circumvent a stand of dark trees. There it rose again toward the summit where the hill flattened out and stretched away into the misted distance of the high plateau.

Dominique stopped at the turn and, looking back, was surprised at how far she had climbed. She stood, breathless, for a moment, and saw the blue flashing light of her van at the foot of the track, and the string of parked vehicles that snaked up the narrow road beyond it toward the
auberge
. She saw a group of tiny figures clustered on the road, an upturned
parabole
beaming its signal to the gods of some edit suite in Paris where its images, accompanied by some well-chosen sound bites, would be dissected for ease of digestion. A great story! A tragedy! A shock
aperitif
for prurient consumers of the evening news all over France.

Wearily the young gendarme turned to face the last few hundred meters of her climb. As she neared the summit she saw, at last, the old ruined stone
buron
breaking the horizon. It was hard to believe now that such a place had once been inhabited. But only in summer, with the beasts feeding on the great banks of wild flowers and sweet grasses that blanketed the plateau. And maybe then, with its soft estival winds and its unbroken views across the roof of France, it was a good place to be. An escape from the world below. A sense of elevation. Of godliness.

But today clouds sat low on the peak, drizzling their misery on the world, losing distance in grey mist. And Dominique saw two figures in dark, shiny waterproofs huddled in the shelter of the wet stone, one sitting on broken rocks, bent over, head in hands. The other stood by the opening that led to the shadowed interior of the
buron
. Its stone roof appeared almost intact, crumbling
lauzes
that kept out the light but let in the rain, supporting a chimney that had not felt the heat of a fire in years. A second, more dilapidated, roof rose at an angle above it, shelter for the animals when the weather closed in.

The standing figure stepped forward to shake Dominique’s hand. A familiar face. He was a big man, broad as well as tall, but diminished somehow by grief. His dark blue
béret
was pulled down low on a furrowed brow, from beneath which grim eyes met hers.

Dominique glanced at the seated figure, and saw the torment in the woman’s briefly upturned face, before it fell back again into black despair. It was the merest of acknowledgments, but no shake of the hand. The gendarme turned back to the man.

He nodded and bowed his head to duck beneath the lintel as she followed him into the darkness beyond. Their shadows fell across a mud floor where water lay in pools, reflecting broken light from the doorway. A mess of footprints pitted the mud. Dominique unclipped the flashlight from her belt and let its beam wander back through the dark until it found the twisted figure of a man in a tracksuit half-lying in a pool of rainwater turned red by his blood. She felt a short, sharp, involuntary intake of breath briefly inflate her chest. Ten years in the
gendarmerie
and this was her first murder. While she had, in that time, pulled horribly mutilated corpses from car wrecks, nothing had quite prepared her for looking into the dead, staring eyes of a man whose face was known in every household in France. A face marred by a single bullet wound in the dead center of his forehead. The bullet had passed straight through. She saw the white, grey mess of brain streaked amidst his bloodied hair, and down in the mud, and felt her stomach heave. She let her eyes follow the beam of her flashlight around the body, just barely in control. She heard the quiver in her own voice. “No gun?”

“None that I could see.”

“He always wore a belt with a pouch to carry his
portable
and his
Thiers
. It’s gone.”

Dominique glanced at him, and felt a tiny frown settle across her eyes. “You think someone killed him for his cellphone and his knife?”

The man shrugged, a helplessness in the slight movement of his shoulders.

Dominique felt the first flush of nausea subside. She tipped her head toward the door. This was a crime scene. She knew well enough that nothing should be disturbed until the experts arrived. She followed the man outside, and took the stakes from under her arm to hammer them into soft ground with the mallet she had brought from the van. One on either side of the entrance. Then she stretched a length of blue and white tape between them and watched as it flapped and fibrillated in the breeze.

“I did.” The man turned painfully blue eyes toward the soft brown of hers. “He left to go for his run as usual, immediately after the lunch service.”

“He went running every day?”

The man nodded. “Always the same route. Down the road from the
auberge
, then up through the trees to the
buron
, and along the ridge and back down toward the main road.” He sighed. “When he wasn’t back by four we started to get worried. Elisabeth was scared in case he’d had a fall.”

“Wouldn’t he have phoned?”

“If conscious yes, I suppose he would.”

“Why didn’t you phone him?”

“I did. There was no reply. That’s why I went out looking for him.”

“What made you look in the
buron
?”

“I didn’t at first. When I couldn’t find him I backtracked and checked inside.” He drew in his lips to contain his emotion. “It’s not an easy thing to find your little brother like that.”

Dominique nodded. She couldn’t really imagine how that must have felt. “What about all these footprints?”

“There seemed to be a lot of them. Certainly more than he could have made himself. And I guess mine are among them now, too.”

“Did you touch the body?”

“No. I approached close enough to see that he was dead. I mean, that was obvious. Then I went back down to the hotel and called you people.”

Dominique let her gaze fall on the forlorn figure of the woman on the rocks.

The man answered the unasked question. “She insisted on coming back up with me. Said she wouldn’t believe it if she didn’t see it for herself. She was very nearly hysterical.” His mouth settled in a grim line. “Catatonic now.”

Dominique walked toward the edge of the track where it began its descent through the falling gloom toward the smudged line of trees below. The arrival of darkness would make access difficult for the
police scientifique
. It would be morning before a proper search of the area could begin. The vehicles on the road had their lights on now. She turned back toward the figure of the man to find him watching her. “How did the press get here so quickly?”

A look of sad resignation flitted across his face. “They were already here. Marc had invited them all down from Paris. He loved to entertain, to be the center of attention. And, of course, no journalist in his right mind would refuse an invitation to dine at the table of Marc Fraysse.”

“What was the occasion?”

He hesitated. “He was in deep despair. Maybe you were aware of the speculation in the media. That Marc was about to lose a star.”

“Would that have been so bad?”

The man’s smile was wry and sad and filled with disbelief. It conveyed with its simple turn of the lips all the history and sophistication which he possessed, that a country gendarme could never acquire. It verged on the patronising. “It would have been
everything
. Everything he had dedicated his life to achieve. It would have been shocking, humiliating, devastating.”

Dominique knew that she must appear gauche and guileless to this man, but pressed on. “So why did he invite the media?”

“He said he wanted to make an announcement.”

The dead man’s brother laid his open palms out before him. “He never made it. We’ll never know.”

Echoes of Lies by Jo Bannister
Isabel and the Wolf: (Part 3) by Ariana Hawkes
Miss Taken by Sue Seabury
These Demented Lands by Alan Warner
The Indigo Pheasant: Volume Two of Longing for Yount: 2 by Daniel A. Rabuzzi
The Christmas Piano Tree: What's Christmas without a tree? (A Kissing Creek novel Book 1) by Bacarr, Jina
Silver Bay Song by Rutter, M J
Exposed to You by Andra Lake
An Honest Heart by Kaye Dacus
Her Lucky Love by Ryan, Carrie Ann