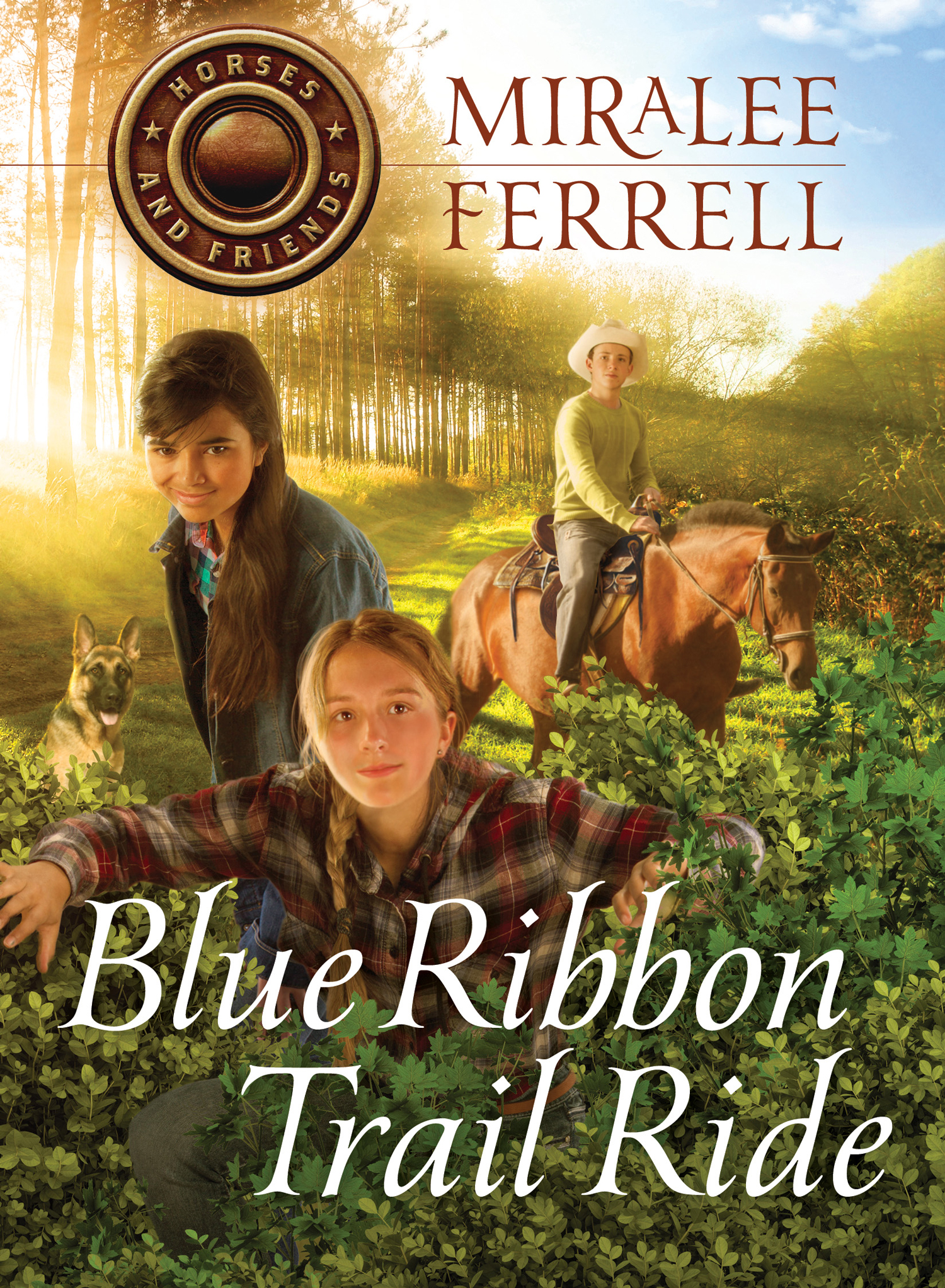 A Horse for Kate

The graphic circle C logo is a registered trademark of David C Cook.

This story is a work of fiction. Characters and events are the product of the author's imagination. Any resemblance to any person, living or dead, is coincidental.

To Kate, my darling granddaughter.
I hope by the time you're old enough
to read these books, you'll love horses
and reading as much as I do.

Secrets for Your Diary

Thirteen-year-old Kate Ferris and her best friend, Tori Velasquez, lay on a pile of loose hay in the loft above the stalls in the barn Kate's family owned. Kate rolled onto her stomach and propped herself on her elbows. “I love working here, but I'm glad the chores are done this early in the day. It's so hot.”

Tori batted at a fly that tried to land on her face. “Yuck. I hate flies. It sure would be nice to go swimming, but the Hood River pool is too far.”

“I know. I already asked Mom, and she said we'll have to wait until she's going to town. What do you want to do now? I don't feel like riding in this heat, even if we don't often have the arena to ourselves. Want to turn on the sprinkler and get cooled off?”

Tori sat up and opened her mouth to speak, then shut it as Kate pointed below. Kate's parents walked across the arena and headed toward the office.

Kate peered over the edge of the loft. She lifted her hand and started to wave, but something about her mother's expression stopped her. Instead, she placed her finger to her lips and shook her head at Tori.

It wasn't that Kate wanted to spy on her parents, but something was up, and she wanted to know what. She scrambled to think of anything she might have done wrong, but nothing came to mind. She and her friends had been helping Mrs. Maynard, an older neighbor up the road, with her chores, and Kate had finished everything in the barn and house that Mom had asked, so that couldn't be what put a frown on her mother's face.

Mom paused outside the office door. “It makes me sick that we can't do it, John. That camp has such a great reputation for helping autistic kids, and it's amazing they still have openings. Isn't there any way we could swing it?”

“I'm sorry, Nan. I don't see how. This boarding stable is close to paying its way, but the first month, it cost more than it brought in.”

Kate's heart jolted. Mom and Dad weren't thinking of shutting it down, were they? She stared at Tori, who looked nervous. Her friend must be thinking the same thing. Kate leaned forward again, hoping that wasn't where this conversation was headed.

“I know. But I think we'll turn a profit this month. The horse show gave us excellent advertising.”

“Which is great,” Kate's dad said. “And as long as that continues, we'll keep it open. But we still don't have the extra it would take for Pete's camp. I'm sorry, honey. It's not in our budget this summer, unless God gives us a miracle.”

Kate's mom nodded. “Let's take one more look at the books, but I know you're right, John. It breaks my heart Pete can't go, when it could be such a help in his progress.”

Kate's dad opened the door to the office and let her mom go in first, then he followed and shut it behind him.

Kate sucked in a breath. “Wow. I thought for sure they were going to say they were closing the barn.”

Tori made a face. “Me too. I'm thankful they aren't, but I'm thinking about Pete. That camp sounds awesome.”

“This is the first I've heard of it. I'm surprised Mom and Dad didn't say anything before.”

“Maybe they didn't want to get Pete's hopes up. He might not talk a lot, but he's a smart kid.”

“I know.” Kate thought for a moment. “How about we call Colt and Melissa and see if we can figure out a way to make enough money to send Pete to camp?”

Kate followed Tori down the ladder to the lower level. “We'd better keep our voices down. Mom and Dad might think we were spying on them.”

She felt bad that she'd wanted to listen, and even worse that the first thing she'd thought about was losing the boarding stable, while Tori's first comment had been about Pete. But right now she was glad she'd been in the barn loft, or they'd never have known her family couldn't afford the camp. Somehow she and her friends had to find a way to make it happen.

A short while later Kate and her three friends sat in the shade of the towering fir tree in the backyard after cooling off in the sprinkler. Kate lifted a glass of lemonade and took a long drink, then set it on the small table near her lawn chair. “I'm glad you guys could come over and help us plan.”

Colt, their thirteen-year-old friend who homeschooled and rode Western, switched a piece of straw to the other side of his mouth. “I've heard about that camp for autistic kids. Mom has a friend who was a cabin leader one year, and she told us how awesome it is. The kids all seem to love it. It's a bummer it costs so much.”

Melissa, who'd once been one of the most popular girls in school, settled into a chair on the other side of Colt. “Your little brother is such a sweet kid, Kate. He deserves to go.”

Tori nodded. “I agree. That's why we wanted the two of you to come help us figure out a way to raise money.”

Kate leaned forward. “I've been thinking. Wouldn't it be great if we could put together some type of horse-related event that the entire community could take part in? And we could make autism the focus of the fund-raiser. Pete would benefit, but if we raised enough money, other kids might be able to go to camp too.”

“Cool!” Colt grinned so wide, he almost lost the straw from the corner of his lips, but he tucked it back in. “Anybody have any brilliant ideas of a horse event that would bring in serious money?”

Melissa flipped her blonde hair over her shoulder. “Well, if it's to benefit special kids like Pete, I'll bet a lot of the townspeople might get involved. What do you think about some kind of trail ride where people win prizes?”

Kate exhaled. “I love it. Way to go, Melissa.” It never failed to surprise her how smart and kind Melissa had turned out to be, once she got over being stuck-up. A twinge of guilt hit Kate. That wasn't fair. Melissa hadn't been stuck-up as much as she'd been hurt in the past by friends who misjudged her and used her when they thought she was wealthy.

Sure, Melissa had been unkind to her and Tori in the beginning, but she later admitted a lot of it was because she was jealous of them. That had totally stunned Kate. The popular, pretty girl jealous of them! But Melissa had envied Kate's family life, and now Kate understood why. Melissa's mom had allowed her divorce and loss of their money to push her to drink and yell at Melissa a lot. Since Kate, Tori, and Colt had accepted Melissa and taken her into their circle of friends, the girl had changed into someone they enjoyed having around.

Tori frowned. “I don't get it. How can a trail ride bring in money and let people win prizes? The prizes would cost us money, right? And wouldn't they have to be awfully big to make anyone want to pay to take part?”

“Actually, it's a great idea.” Colt rubbed his chin. “When I lived in Montana, I went on a trail ride like that, but it was a scavenger hunt. We had a great turnout, and horse clubs from all over took part. The sponsors hid items along the trail. Participants were given clues and had to hunt for the items. There was a big prize at the end for the person who found the most items, but there were a lot of prizes for people who came in second and thirdâeven riders who found all the items but didn't get there fast. We could do age categories to make it fair.”

Tori waved her hand. “I still don't get it. How would we pay for the prizes? From the entry fee people pay?”

Kate shook her head. “Nope. All of that money would go into the fund. We'd ask businesses in Hood River and here in Odell to donate gift certificates or items from their stores as prizes. Right, Colt?”

“Right. Some of the businesses in Montana donated really cool stuff. The barn that sponsored the ride took out ads in the paper. You know, the
Hood River News
would probably give us a free ad, since it's a fund-raiser.”

Tori groaned. “So, let's see if I get this right. Who goes out and asks all these businesspeople and the newspaper to donate stuff?”

Melissa gave one of her old smirks. “We do, silly. But hey, it's not a big deal. I've done fund-raising with the Pony Club.” She lowered her head. “When I used to belong, I mean.”

Kate's heart lurched at the pain in Melissa's voice. She'd wondered if Melissa had dropped out of the club, since her family no longer had the money. “Great! Then you can be our expert and make sure we know what to say. You did an awesome job getting us organized for the parade we rode in during Fort Dalles Days.”

“Seriously?” Melissa's voice squeaked. “You want me to be in charge again? Why?”

Kate smiled. “Because you're a natural leader, that's why.”

“But I might mess it up. What if no one wants to give anything?” A note of panic crept into her words. “Some of the people in town knew my dad, and since he left â¦”

Tori reached out her hand and grabbed Melissa's. “That's not going to happen, Melissa. Like Kate said, you're good at this stuff, and we trust you. Nothing's going to go wrong. Just you wait and see.”