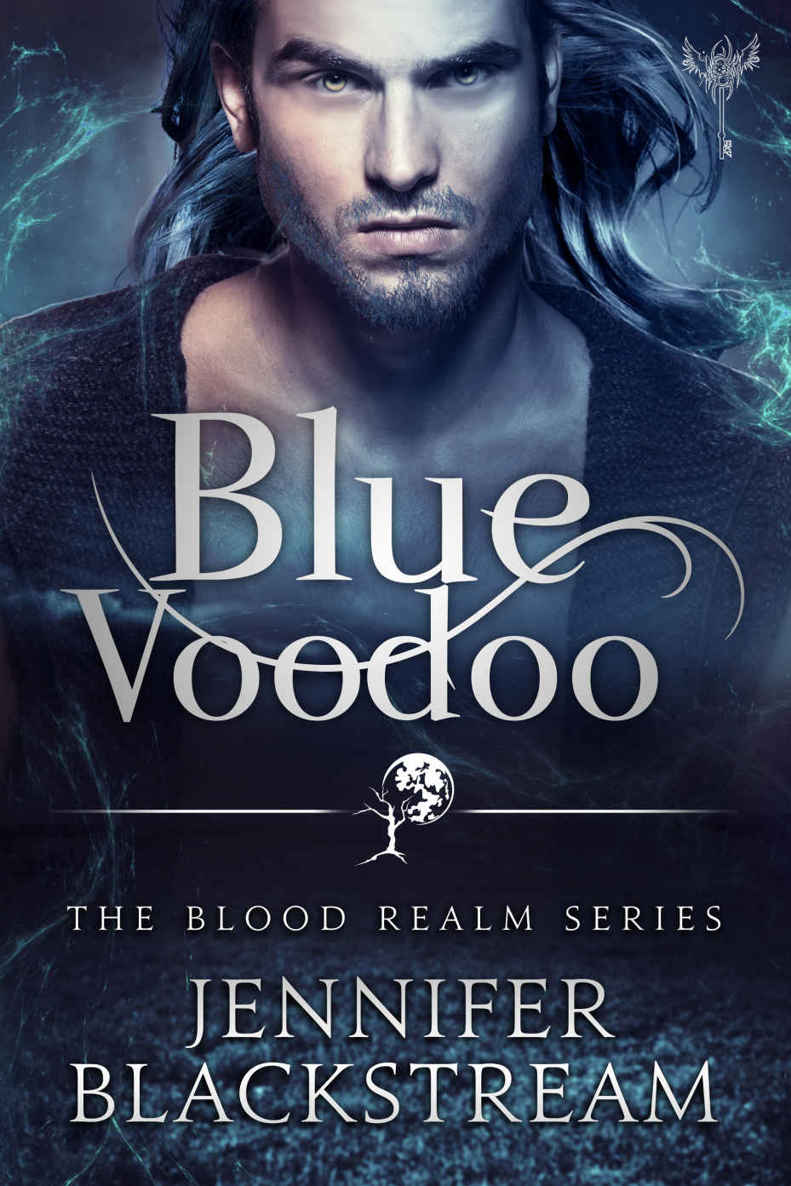 “The story of a pirate and the voodoo queen who gave him the blues...literally.”

A pirate with the blues. . .literally

Julien is a pirate with a demand. Years ago, his vehement determination to protect his freedom at any cost drove him from the warm embrace of a young voodoo priestess and out into the open sea. Her retribution for his abandonment was a curse that turned his beard a disturbingly vibrant shade of blue. Though it has made for an apropos pirate name—Bluebeard—it has made succeeding in a profession that requires secrecy and anonymity…difficult.

After a decade of staying only a wave or two ahead of lawmakers who find it only too easy to locate witnesses who remember him, Julien has had enough. He’s going to find the little voodoo priestess and he’s going to see that she compensates him for all she cost him…with interest.

A voodoo queen who doesn’t have the blues. . .and doesn’t want them

Ten years ago, Dominique allowed a smooth-talking pirate to coax her into his bed, only to wake alone the next morning just in time to see him set sail without so much as a goodbye. Born to a line of powerful voodoo priests and priestesses, it was nothing for her to fling a curse at the man who scorned her—but that wasn’t enough.

Swearing she would never again suffer such disrespect, Dominique dedicated herself to becoming a true voodoo queen. She serves the loa and her community, feeding her mysterious reputation with charms and spells that heal those who are loyal to her. Between her magic and her thriving rumrunning business, Dominique now has the status and respect that she craves—and she has no intention of sharing it with the pirate whose blue beard is nearly as outrageous as his marriage proposal.

A pirate with a blue beard. A voodoo queen. Three dead wives. It will take more than a marriage to bring this man and woman together. It will take a little…Blue Voodoo.

Preview of BEFORE MIDNIGHT, book one in the Blood Prince series

Other Books by Jennifer Blackstream

Did you find a typo? 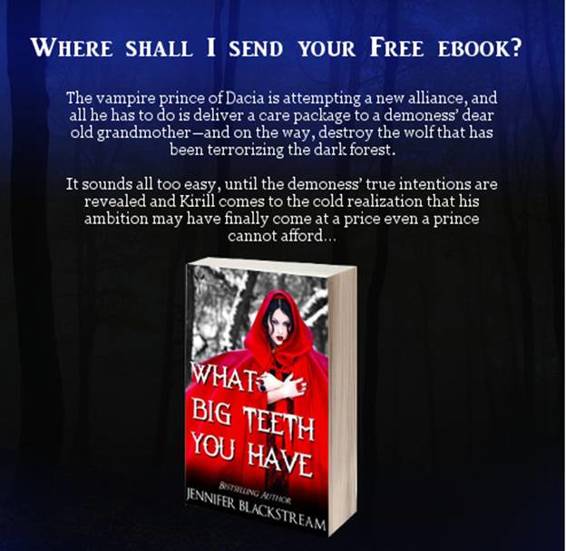 GO TO
http://jenniferblackstream.com/free-copy.html
TO GET YOUR FREE BOOKS

“I can’t believe you put your faith in this swamp witch.”

The butler’s censure fell over Dominique like an upended drawer of cooking knives, sharp tones cutting and brash. It wasn’t the first comment he’d made during her short visit, nor did she think it would be his last. Unacceptable, considering he had never been invited to witness this meeting in the first place.
Breathe.
Dominique didn’t look at the butler, didn’t give him the satisfaction of reacting at all. Instead, she picked up the small pouch of soot set out amongst her other ingredients on the stone floor beside her. Singing under her breath to the
loa,
Agwe, she added the soot to a hollowed pumpkin gourd, letting it drift down to join the powdered lizard, red precipitate, and the soil she’d gathered this morning from a local crossroad.

The warm caress of her power hummed through her fingertips, infusing the concoction with the energy of the
loa
, the mystical messengers that bridged the void between humans and the great god Bondye. The sensation was as familiar and soothing to her as her own heartbeat. Energy built, spreading outward in ever growing circles, filling the room with the kiss of magic.

Her client, a cook named Widelene, sat on a stool near where Dominique worked. Even as her body remained slumped in her seat, she tracked every movement with sharp curiosity. The lines around her eyes were deeper than they should be, painting the woman’s exhaustion over her face for the world to see. It was no wonder she’d come to Dominique for help. The poor woman hadn’t had a decent night’s sleep in over a week.

But that was about to change.

Dominique rubbed oil into the wick she’d pulled from her bag, then suspended it over the ingredients in the gourd with two slivers of ivory bone. “Those dreams won’t bother you anymore, Widelene. Take this and hang it from a tree in front of your house. Light it at sundown and douse it after you wake. The ingredients must be replaced every week for seven weeks and then you must throw the whole thing into the sea and say a prayer of thanks to Agwe. I will come to check on you next week and will bring fresh ingredients then.”

Widelene’s cloudy brown eyes bounced from Dominique to the butler behind her. “Th-thank you so much, Madame Laveau.”

Dominique inclined her head, the tail of her sunset-hued cotton head wrap sliding over her shoulder to brush the neckline of her white blouse.

“Don’t thank her.” The butler took an agitated step forward. “She hasn’t done anything but make a fool out of you.”

More color drained from Widelene’s face until her normal ebony complexion was nearly as light as Dominique’s own sienna hue. Her gaze flicked from Dominique to the butler and back. The sour man was above her in the house hierarchy and could make her working life miserable if he chose. But Dominique was a voodoo priestess, someone with power and influence amongst the
loa
, messengers to Bondye. The lines on her face deepened even more, her breathing becoming ragged.

Dominique rested a hand on Widelene’s knee, offering silent support. She rose to her feet from the position she’d been kneeling in for the last half hour.

Keeping an iron grip on her balance, Dominique gained her feet in one smooth, unhurried motion, careful not to betray any of the sharp stabs of pain that pricked her knees and ankles from their time spent holding still in an uncomfortable position. She turned to confront the butler like an actress in a play, the movement graceful and dramatic, giving the man plenty of time to reflect on what she might say—what she might do. Her eyes locked on his.

She enunciated every syllable, rolling them on her tongue. The skin at Gerard’s temples tightened, but his lip retained its derisive curl. His impeccably groomed hair was liberally sprinkled with grey, providing a contrast to skin the color of water on a moonless night. “So you know my name. You think that frightens me?” He snorted. “If that’s all you have,
voodoo queen
, then be on your way.” He glared at Widelene, his voice rising the deeper she huddled into her shawl. “You’ve gotten all the fool’s adulation you’re going to get here.”

Dominique slashed her hand through the air, halting with her fingers inches from his head. The butler tensed, but held his ground, hands balled tightly at his side like he was bracing for impact.

With a flick of her wrist, Dominique plucked a hair from Gerard’s head, holding the strand inches in front of the butler’s nose. He pressed his lips together, firmly biting back whatever words he wanted to let fly. Power pulsed inside her, waiting to be used, but she ignored it. She didn’t need power for the likes of him. She leaned forward and put her lips a hair’s breath away from the shell of his ear.

“The gambling tables can be so cruel. Can’t they, Gerard Xavier Roche?”

The flinch that rattled the butler’s body was quick and violent. He swayed a little as though he would step back, but foolish pride was enough to help him stubbornly hold his ground.

“Time to count the family silver.” Dominique’s breath ghosted over his skin, leaving a trail of gooseflesh in its wake.

Gerard staggered back like he’d been struck, the full weight of his body pulling his shoulders down and his jaw sagging open. Widelene—the source of that particular bit of knowledge—let out a strangled whimper before she quickly remembered herself and covered her mouth. Dominique made a show of putting the hair into the pocket of her skirt, patting it as she looked down her nose at its origin.

“Respect is very important, Gerard Xavier Roche. Those who do not know whom to give it to will often find the lesson that follows to be very…unpleasant.”

With that parting shot, she swept out of the kitchen. Pointedly ignoring the servants’ exit, she strode up the stairs to the main house. Her burgundy skirts swirled around her legs, the heavy material rubbing against her like a friendly cat. She hauled it over her boots to keep her petticoats from tangling around her in an undignified fashion as she flowed through the foyer to the front doors.

“Madame Laveau, I didn’t realize you were here.”

The deep voice vibrated Dominique’s insides with the strength of the baritone. She recognized it immediately and spun around with open arms. “Leonaldo, what a pleasure.”

The lord of the manor strode across the foyer with the ambling gait of a man comfortable with himself and his environment. His skin was as dark as his voice was deep, his teeth a brilliant crescent moon in a night sky. He held his arms out and Dominique allowed him to fold her into his embrace, chuckling as he squeezed her and rocked her from side to side.

“You do not come around enough,” Lord Mercier told her, pulling back to see her properly. “You grow more beautiful every time I see you.”

“Shameless flattery is always welcome.” Dominique responded to her host’s joy with a full smile of her own. “And you are looking handsome as well.”

Lord Mercier rolled his eyes. “Are you sure about that? Have I not gone completely grey, then?”

She eyed the lord’s head of dark, well-groomed hair. There was a fair dusting of silver strands making themselves known, but he was far from being completely grey. “Something is driving the color from your hair, then?”

Intrigued by that succinct response, Dominique followed the direction of the lord’s stare to the back of the house and caught a glimpse of a young servant biting his lip in deep concentration as he struggled to balance a tray full of dishes. His blue eyes were locked on the porcelain as if he could will them to stay put, his pale cheeks holding a pink tint that spoke of more exertion than such a task warranted. The tray teetered precariously and she had to avert her eyes or be overcome with a case of sympathetic nerves. “A new recruit, I see. He does not appear to be from Ville au Camp?”

“He is not.” Lord Mercier winced and looked away as if he too couldn’t bear the suspense of waiting for the tea set’s death. “A good friend’s daughter grew sweet on the boy during a visit to Nysa, and when they moved here to Sanguennay, she begged me to employ the lad so he could come as well.”

There was a gasp from the kitchen and Dominique tensed, her nerves screaming as they predicted the inevitable crash. “I’m sure he’ll fit in after he’s had a bit more time.”

“You have been away for a long time,” Lord Mercier pointed out tersely. “He’s already been here for
seven months
.”

Rock Chick 04 Renegade by Kristen Ashley
Who Brings Forth the Wind (Kensington Chronicles) by Lori Wick
Few Things Left Unsaid by Sudeep Nagarkar
Escapism (The Escapism Series) by Dee, Maria
The House of Wolfe by James Carlos Blake
You'll Grow Out of It by Jessi Klein
Suck It Up by Hillman, Emma
Royal Baby by Hunt, Lauren
Dance Till You Die by Carolyn Keene
The Devil's Own Desperado by Lynda J. Cox