Read Boats in the night Online

Boats in the night 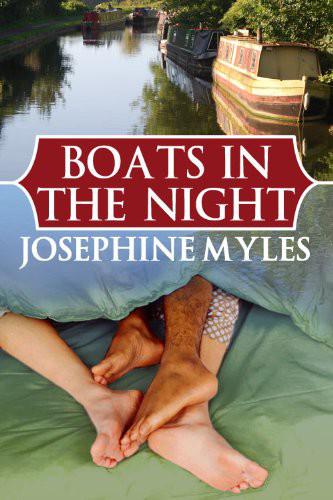 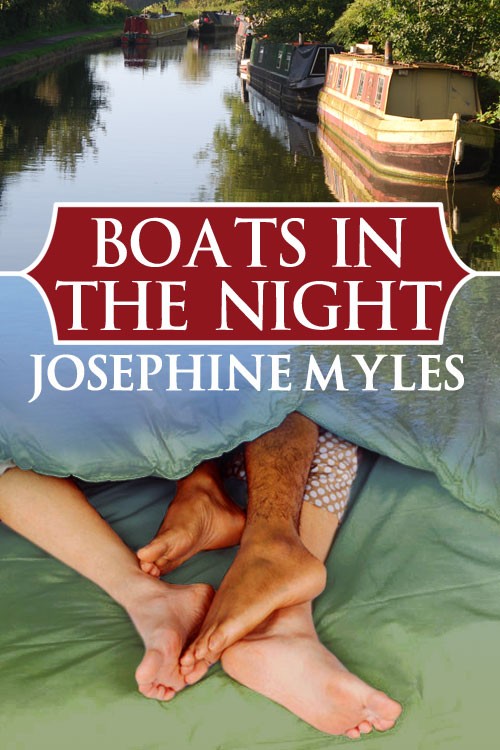 About Boats in the Night

Like two ships passing in the night—if one was a narrowboat and the other a luxury yacht.

Disgraced private school teacher Giles Rathbourne has been sent home on extended sick-leave and is stuck in a rut of obsessive housework and drinking. His ex may have been a snobbish bastard, but without him, Giles is adrift, rattling around his huge, lonely house.

When a dreadlocked narrowboater’s engine breaks down at the end of his canal-side garden, Giles is furious at this invasion of his privacy—for a while.

Smutty might not have ever held down a proper job, but the fire-dancing, free-spirited traveller can recognise an opportunity for mutual benefit when he sees it. Giles’ extensive gardens are in as desperate need of attention as the upper-class hunk is himself, whereas Smutty knows a thing or two about plants and needs a place to moor up.

A simple business arrangement between two men who have nothing else in common? It

would be—if they could keep their hands off each other!

This story was originally published between January and November 2011as a serial novella on Jo’s blog. The original version is still available for free on Jo’s website

(josephinemyles.com) but
this ebook version has been fully revised and edited prior to release.

Boats in the Night

This ebook is licensed for your personal enjoyment only. This ebook may not be re-sold or given away to other people. If you would like to share this book with another person, please purchase an additional copy for each reader. If you’re reading this book and did not purchase it, or it was not purchased for your use only, then please return to Smashwords.com and purchase your own copy. Thank you for respecting the hard work of this author.

dragged him rudely into another empty morning. He glared at its smug face, fighting the urge to defenestrate the bloody thing. The window was shut, and he didn’t want to break it. Not again.

Tea. Giles had a medical need for tea. The morning always looked better after that

first cup had taken the sharp edges off. He stumbled downstairs, tying the belt of his dressing gown as he lurched into the kitchen. The April sunshine assaulted his eyes and he groaned.

He didn’t need to be up this early. It wasn’t like he had a job to go to any more—not now they’d kindly informed him he’d be better off ‘resting’ until he was ready to return.

burning shame. It had been four weeks ago now, but Giles had a feeling the mortifying recollections wouldn’t fade for a long time. He had a good excuse for his behaviour, of course. Six years of slowly-brewing stress and incipient alcoholism had finally come to a head after Fabian had walked out on their relationship.

After a long night seeking oblivion at the bottom of a bottle of ten-year-old Scotch, Giles had experienced a shocking lapse of judgement and gone into work. Just his luck for the day to have kicked off with taking Year Twelve for double English Lit. That class had always wound him up, and the alcohol had loosened his tongue enough for him to inform the little sods exactly what he thought of them. The deputy head had come to investigate what all the noise was about, and Giles had generously gifted the officious bastard a tongue-lashing all of his own. Then there was that ill-advised sprint through the quad that culminated in him throwing up in the fountain right outside the Headmaster’s office.

No, he could understand why they didn’t want him back right now. He had a feeling

they wouldn’t want him to return until the new school year in September—if they wanted him back at all.

Giles sighed and glanced at the drinks cabinet as the kettle hummed. A wee tot of

something in his tea would ease the throbbing behind his eyes, but he had a routine and he was going to stick to it. Up at seven, housework all morning—his house was spotless now but there was always some new chore he could invent—painting after lunch and no opening that cabinet or venturing into the cellar until after six in the evening, no matter how much those bottles called to him. The routine was the only thing keeping him from losing the plot entirely. Keeping him sane… if you could call a man who had spent the previous morning carefully dusting every last light-bulb in the house sane.

eardrums wasn’t just his hangover. It was a boat engine—nothing unusual there as his garden backed onto the canal and he often heard them chugging past. This one didn’t sound healthy, though. There was an irregular beat, punctuated by ear-splitting bangs. Giles clutched his head and groaned. Just what he bloody well needed.

Giles peered out of the kitchen window. It was hard to see anything much past the

tangle of ancient fruit trees and brambly undergrowth, but he caught a glimpse of bright blue paint under a plume of white smoke.

Then the engine died.

The silence was deafening. Giles could still see the boat through the vegetation, stuck there at the end of his garden. That just wouldn’t do. He needed his privacy. Someone would have to tell the boat owner to move along, and as there was no one else here, nor likely to be, that someone would have to be him.

Giles was halfway through his orchard before he realised he was still in his dressing gown and slippers.

“Shit!” Smutty steered
Freya
into the bank with the last of her forward momentum then grabbed hold of the mooring pins and mallet. He hoped she’d just overheated, but the misfiring and smoke had him worried it might be something more serious. What if she’d blown a gasket? That wasn’t the kind of thing he knew how to repair, and he had a feeling it would be costly to put right.

Mind you, everything was costly to a man who’d just spent his very last penny on a

“Come on girl,” he said, patting her roof as the engine made ominous settling-down

He was out in the wilds near Bradford on Avon, but at least he’d managed to find

somewhere with a decent area of rabbit-cropped grass by the canal-side for him to work on the engine. He probably should have moored up on the towpath side, but he’d liked the look of the wild side better. That was him, always walking on the wild side. He gave a wry smile as he remembered some of the more debauched episodes from his winter travelling around Australia. At times things had got a little too much even for him. Gods, what if he was starting to get too old for the itinerant lifestyle? He wasn’t about to start hankering after settling down, was he?

Smutty shrugged off the thought and smiled as he hammered in the first mooring pin.

Okay, so it was a bugger having the engine fail on him mere hours after signing over his money, but he couldn’t have asked for a more beautiful spot to moor up while he figured out how to fix her. He could just make out blossoming trees beyond the tangle of brambles that bordered the close-cropped grass. Looked like apple blossom, although it was hard to tell from this distance. He’d have to take a stroll up there later and check it out.

He was hammering in the second pin, lost in fond memories of the orchard at the

dragging him around the world, that was—when he became aware of a prickling sensation at the back of his neck. Felt like someone was watching him.

Smutty turned and grinned. The guy was glaring at him, but it was hard to take a man seriously when he was dressed in one of those old-fashioned, royal-blue quilted dressing-gowns and a pair of fluffy slippers shaped to look like animal feet, complete with a row of claws at the toes. Mind you, he always smiled at strangers, no matter how nutty they looked, because his mum had taught him that a stranger was just a friend he hadn’t met before, and so far his experiences had backed her up pretty well. He just had to try to forget about the few times that philosophy had let him down.

Maybe the guy had taken objection to the way he looked. Smutty checked out his

outfit. It was a little ragged but no worse than usual—black jeans and an orange T-shirt.

Nothing objectionable there. The hair threw some people, but he tended to get more

compliments than insults about the dreads. He kept them short for safety, no longer than two inches so they stood out around his head like a corona. It was part of the whole fire-dancing act, and the bleach topped off with a red, orange and yellow dye job made it look like his head was ablaze.

“All right, mate? Anything I can do for you?” he called.

Dressing-gown bloke stalked across the short grass towards him. Smutty took a

moment to tie the rope to the second pin so that
Freya
was secure then looked up again. The guy was almost on him, and up close he had a whole new set of impressions. Forget about the crazy dress sense and hostile expression—just look at those eyes! They glowed a bright, turquoise-blue, lambent in the morning light. He didn’t think he’d ever seen such beautiful eyes, so it was a shame that the effect was currently spoilt by the bloodshot whites. The unearthly blue was striking against the pallor of the guy’s skin and the dark brown hair that tousled on his head—and his chest too, but Smutty tried to keep his gaze above the shoulders.

Best not to check someone out when they were about to rip into you, although he

couldn’t help but wonder if Dressing-gown bloke was wearing anything underneath the robe.

Based on the rest of the guy’s outfit, it would probably be something bizarre like a pair of Superman briefs.

“What the blazes do you think you’re doing in my garden? This is trespass, I’ll have you know.” Dressing-gown bloke spat the words out, but Smutty could hear the refinement in his accent. It would be good to hear that deep voice mould itself around more agreeable words. He had no doubt that he’d be able to calm the guy down quickly enough, though—he was usually pretty good at that sort of thing.

“Sorry mate. I thought it was public land. Didn’t see any fences or buildings or I’d have moored up on the other side.” Smutty glanced back over the canal to the narrow strip of grass next to the dusty towpath. No, this side was much better. He wanted to stay here if he could get away with it. He straightened up, pleased to notice Dressing-gown bloke was about the same height as him so he wouldn’t end up unintentionally intimidating the guy just because he was tall.

“Name’s Smutty.” He stuck out his hand and smiled. “Just bought the boat and then

had the engine die on me. I could do with mooring up for a bit while I figure out what the problem is. Probably won’t take too long. What do you say? You’ll hardly know I’m here.

Not unless you want to, anyway.” Smutty couldn’t help the flirtatious note that slipped into his voice, but he did his best to look wide-eyed and trustworthy.