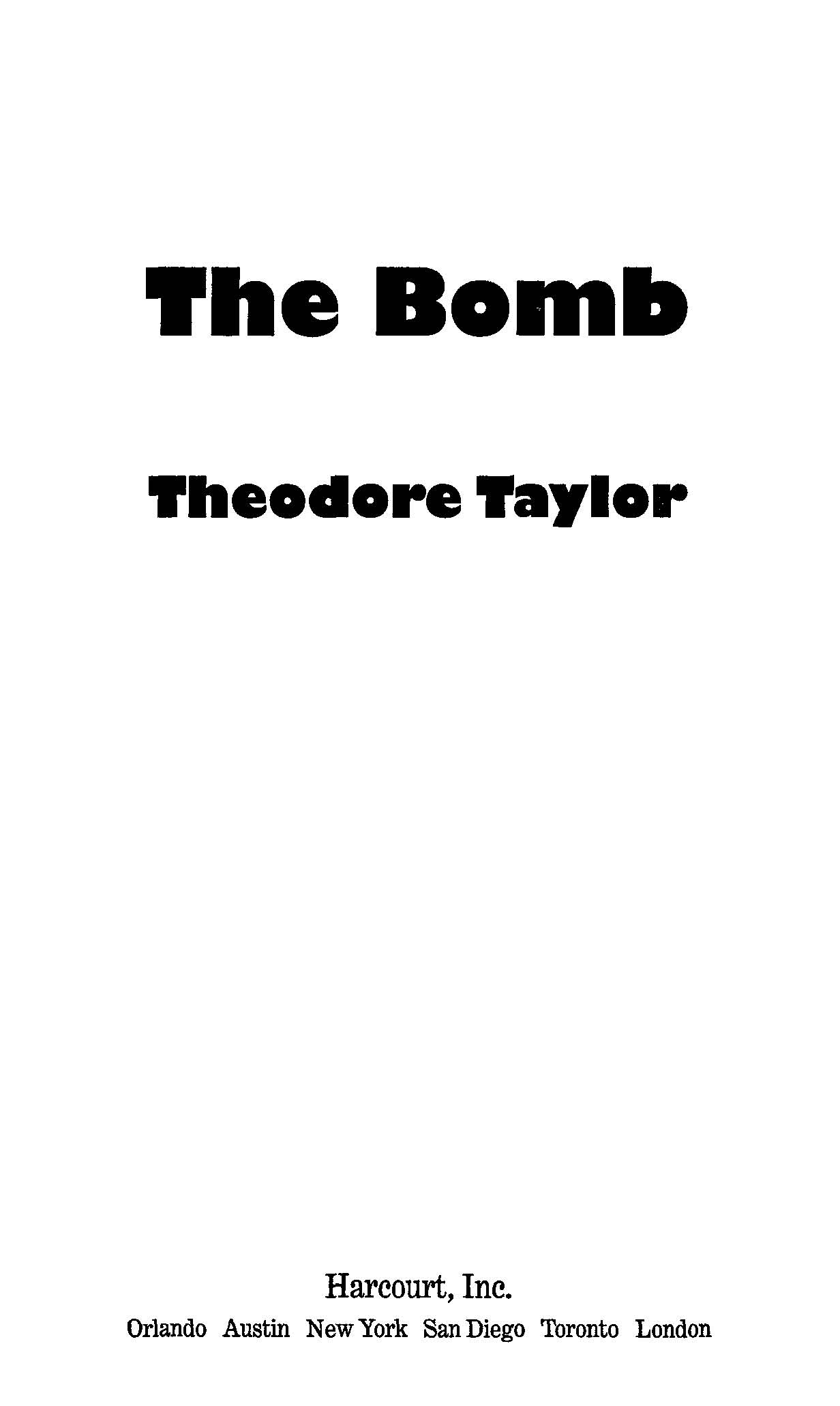 All rights reserved. No part of this publication may be reproduced or
transmitted in any form or by any means, electronic or mechanical,
including photocopy, recording, or any information storage and retrieval
system, without permission in writing from the publisher.

Requests for permission to make copies of any part of the work should
be submitted online at
www.harcourt.com/contact
or mailed to the
following address: Permissions Department, Harcourt, Inc.,
6277 Sea Harbor Drive, Orlando, Florida 32887-6777.

The Library of Congress has cataloged the hardcover edition as follows:
Taylor, Theodore, 1921â2006.
The bomb/Theodore Taylor,
p. cm.
Summary: In 1944, when the Americans liberate Bikini Atoll from
the Japanese, fourteen-year-old Sorry Rinamu does not realize
that in two years he will lead a desperate effort to save his island
home from a much more deadly threat.
1. Atomic BombâMarshall IslandsâBikini AtollâTestingâJuvenile
fiction. [1. Bikini Atoll (Marshall Islands)âFiction. 2. Atomic bombâ
Marshall IslandsâBikini AtollâTestingâFiction.] I. Title.
PZ7.T2186Bo 1995
[Fic]âdc20 95-10683
ISBN 978-0-15-200867-3
ISBN 978-0-15-206165-4 pb

This is a work of fiction. All the names, characters, places, organizations,
and events portrayed, in this book are the products of the author's
imagination or are used fictitiously to lend a sense of realism to the story.

Amazing grace! How sweet the sound
That saved a wretch like me!
I once was lost, but now am found,
Was blind, but now I see. 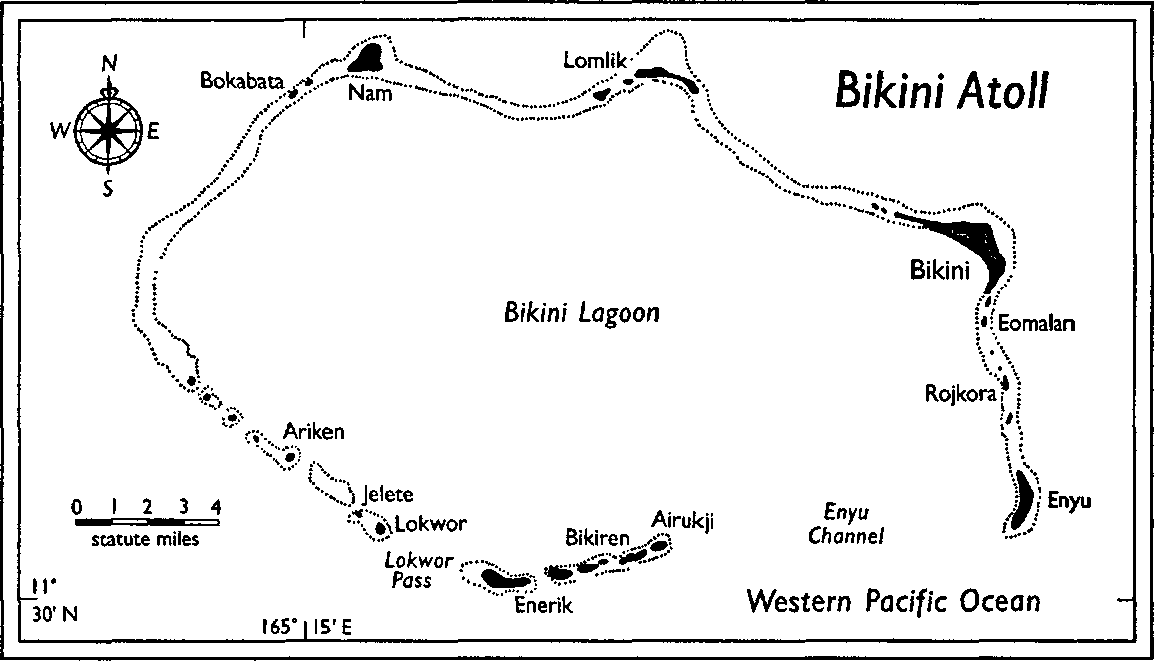 Just before the roosters crowed one day in late March 1944, Sorry Rinamu was awakened by great, angry roars from the sky, louder than rolling thunderclaps. Close as the palm-tree tops. Fast moving.

There'd been no warning that dawn. Thick silence; then the sudden, deep growls from above.

Terrified, he jumped off his sleeping mat, and ran outside the family dwelling, which faced the quiet lagoon. He was wearing homemade shorts of sun-bleached rice-bag material, his usual clothing day or night.

His mother and younger sister scrambled out behind him like frightened geese, almost falling over each other. Teacher Tara Malolo, who was living with them that week, came out, too. His grandfather and grandmother followed. There were high-pitched wails and the screams of
ajiri,
small children, from other village dwellings that faced the beach. Everyone had been deeply asleep, accustomed to the lullaby of the surf, the friendly rustle of the palm trees.

In the shallow gray light Sorry could see eight blue aircraft circling far out over the lagoon, single file, like a flight of pelicans. Then they turned back toward the thatch-walled, thatch-roofed houses, flying so low thai Sorry could see the outlines of bobbing heads in the open cockpits. The roars grew again. For a moment, as the planes paralleled the beach, then cut sharply over the north end of the island, he thought they'd unload their bombs. Blow up the houses, kill everyone.

His sister, Lokileni, thought so, too. She stood there in a faded cotton nightshirt, screaming. Slender body shaking. Eyes tightly closed to ward off death.

His
jinen,
his mother, Ruta Rinamu, went to her knees in the sand, praying, eyes closed, the tips of her fingers touching her chin.

Sorry held his breath. His brown eyes were wide with fear.
Please do not kill us!

His
jimman,
his grandfather, Jonjen, stared at the planes as if his look could drive away the evil vultures. He did not seem afraid.

His
jibun,
his grandmother, Yolo, covered her sunken eyes. She feared ghosts and seldom spoke. She was with the spirits of the wind, the tides, the rains, the fishes. Her skin was like crinkly brown paper stretched over her bones.

Others in the village had come out of their houses and were standing or kneeling on the beach in little groups.
Terrified. Frozen. Screaming. Praying.

The planes continued their second run, coming even lower.

The first one fired a machine-gun burst at the Japanese weather station, north of the houses. The second did the same.

As they flew over again, the palm and pandanus trees actually quivered. Sorry could feel the heat of engine exhausts and see the flames spitting from them. Explosions always came with the white men.

The free-running pigs squealed and ran in circles. Chickens screeched, frightened silly, too, by the noise. The island's six dogs ran under the small cookhouses to hide.

Sorry covered his ears but kept his eyes open.

Grandfather Jonjen finally identified the dive-bombers and whom they belonged to. He shouted happily, "Amiricaans, Amiricaans!..." The planes had white stars on their sides, not the red markings of Japan.

Tara jumped up and down, clapping her hands.

As the throbbing engine noises began to fade, the shout of "Amiricaans" echoed joyously along the beach. There was laughter and hugging, much excitement. Even the bewildered
ajiri
were now smiling, though they didn't know why.

Several of the American navy pilots had waved from their cockpits. One had held up his fingers in a V, the victory sign, new to the islanders.

Perhaps that meant that Bikini, northernmost atoll of the Ralik chain, twenty-two hundred miles southwest of Hawaii, would soon be free of Japanese occupation.

Twenty-six islands and islets, the larger ones palm-and pandanus-tree-covered, formed the atoll, an oval lagoon in the ocean rimmed with coral reefs. Bikini, largest and most beautiful of the twenty-six, was four miles long and less than a half mile wide. All the Rinamus had been born on the island. Only Sorry's late father, Badina Rinamu, and Grandfather Jonjen had ventured beyond the lagoon. Sorry hoped to do that someday, sail to the
ailiÌ nkan,
the outside world.

In five days, he would turn fourteen and officially become a man in island tradition with a family celebration. He was already the main provider of food. He would also become the head of the family, replacing Grandfather Jonjen, who had been acting head since Badina Rinamu died four years ago. Sorry would now be the family
alab,
representing the Rinamus on the village council, with Jonjen as his legal adviser.

There could not have been a better early birthday gift than those roaring planes and waving pilots, that gunfire.

Her fright ebbing away, Lokileni asked, "Will we be free?"

The Japanese soldiers sometimes demanded the bodies of young girls. Lokileni was only eleven, but she was in danger when the soldiers had too much beer or palm wine. So there was good reason for her to fear them, good reason for Sorry to protect her.

As the engine clatter vanished entirely, the planes becoming dots in the western sky, Sorry looked up the beach toward the gray wooden weather station with its big radio antennae on the roof, target of the machine-gun burst.

The Japanese soldiers were standing outside watching the aircraft disappear. One man had been killed by the second plane. The others were jabbering excitedly. Sorry could hear them faintly.

Everyone in the village hated them. They never smiled. They were never polite. The islanders called the squat wooden building
mwen ekamijak,
"house of fear."

Once, about a year ago, the sergeant, their leader, claimed Sorry had insulted him. He'd laughed when he saw the sergeant trip and fall down in the sand. The sergeant had made Sorry bow down a thousand times to the doorstep of the
mwen ekamijak.
A soldier, aiming a rifle at him, had counted.

That night, to prove he was not a coward, Sorry had waited near the barracks, hidden, the family ax in his hand, for the sergeant to come out. But he never did. Finally, Sorry went home to sleep.

From time to time, he'd heard the elders talk of killing the soldiers. Serious talk. And he'd joined in. He was ready to use the ax and help chop them to pieces. But the
iroij,
kindly Chief Judaâdescendant of the famed Larkelon, once the highest Ralik chain chieftainâsaid that many soldiers would then come 250 miles from Kwajalein, a headquarters island, and shoot every man, woman, and child on Bikini. Show no mercy!

Jonjen had said, "Juda is right. If the soldiers don't send a weather message back to their base for two or three days, a seaplane will come to find out why."

"There's nothing we can do?" Sorry had asked, wishing his father were still alive.
He
would fight.

"Nothing," his grandfather answered.

Up to the day in 1942 when the Japanese invaded and mined the lagoon entrance, there'd been peace on the atoll for a hundred years or more. No one had a gun. Sorry had never even seen one until the Japanese arrived. The only land enemies had been flies, scorpions, and palm rats.

Words had been passed along from the outside world, traveling from lonely atoll to lonely atoll like birds on flyways. Outriggers from other atolls and the few ships that ever visited usually entered through Enyu Channel, a wide opening between Enyu Island and Airukji Island. The ships would anchor about a quarter mile off the beach, but the outriggers would ride right up on it. There would be feasts and outsider talk about the wondrous
ailiÌ nkan
for two or three days, then the visitors would go. After they departed, the people would talk about the talking and think about the talking. Sorry had always listened eagerly.

Otherwise, what happened daily on Bikini was sunrise and sunset and the gathering of food from the trees and from the sea and making mats and baskets and walls and roofs and twine and
talk.
Talk about the fish and the weather and each other. The breeze hummed; the pigs rooted; the chickens walked and pecked, walked and pecked. Peace and quietâuntil the Japanese arrived.

"Why did they come here?" Sorry had once asked angrily.

"Weather conditions are always important to ships and aircraft," Jonjen had answered.

In the world Sorry knew best, his family lived, worked, laughed, sang, and prayed as if war didn't exist, as if the world stopped at the entrance to the lagoon. Suddenly they were captives, lazy natives, kin to monkeys. The Japanese didn't need to say it. The message was in their eyes:
You are inferior. You are worthless.

The Chase by Lauren Hawkeye
The Binding by Nicholas Wolff
Burning Up by Coulson, Marie
Get It Done When You're Depressed by Julie A. Fast
Summer Son by Anna Martin
Furious Love by Sam Kashner
Kitchen Confidential by Bourdain, Anthony
Apocalypse (The Wasteland Chronicles, #1) by Kyle West
For Heaven's Eyes Only by Green, Simon R.
Be Frank With Me by Julia Claiborne Johnson