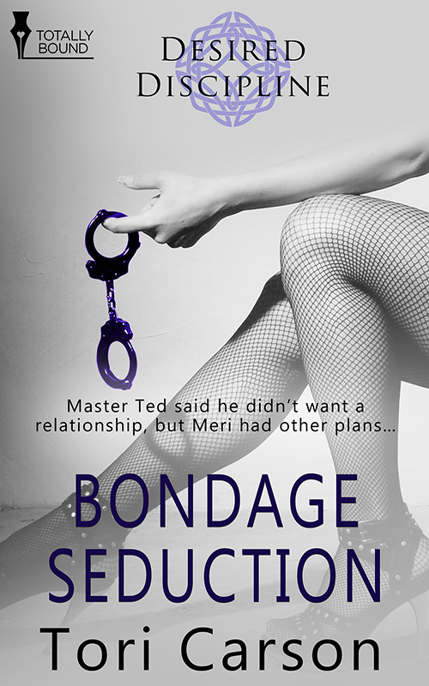 Master Ted tries to keep it purely sexual. He says he doesn’t want a relationship, but Meri has other plans…

Even in a room full of friends, Ted often feels alone. As the black sheep of the family, he’s never measured up to the expectations of others so he’s stopped trying. Expecting to and okay with spending the rest of his life alone, he’s thrown himself into his business. He spends his days managing the sex toy division of DiscipliNation and his evenings in the kink club.

Although fireworks erupt at their very first meeting, Ted knows better than to give his heart to an overachiever like Meri. He valiantly tries to keep his distance, but her allure goes deeper than a purely sexual attraction. Meri ignites his passion and yet, in her company he experiences a peace he’s never enjoyed before.

Ted sets Meri’s panties on fire until he orders her to stop wearing them. Meri falls hard and fast for the tall, dark Dom. He tells her up front that a relationship isn’t part of his plans, but Meri has her own agenda.

To my loving husband who is always there when I need him. Your unwavering support means more to me than you’ll ever know.

To Erik and Sophie for standing behind me in all my endeavours.

I’d also like to dedicate this book to my Tumblr buddies Kiki, Kay, John, Kayla, Clay, Angie, and Wolf. You always bring a smile to my face. Thank you.

Meri looked in the mirror of the ladies locker room at DiscipliNation. Her dress had looked cute on the size two mannequin at the fet store. The black spandex mini-dress with strategically placed slashes had seemed like a good idea. It was daring but allowed all her truly private areas to remain private—and kept her from wearing a bra or panties. Damn it, if she pulled the dress down to keep it from showing the cheeks of her ass, the slits opened up like she’d been in a shredder accident.

Decision time. Turn around, go home and be satisfied to only read about other people fulfilling their fantasies, or pull off her big girl panties and give this a try. Hell, she’d already spent an enormous amount of money to join the club. What did she have to lose—except her modesty and boredom?

Taking a deep breath, then two. Okay, one more maybe… She bent over and removed her underwear. After stuffing it into her locker, she looked at the ceiling—anywhere but the mirror—and forced one foot in front of the other until she’d entered the great hall. The low, steady beat of music drew her farther into the room. She stayed as close to the walls and in the shadows as possible. Maybe if she could make it to the bar, she could melt into the scenery for a while and get her nerves under control.
Why was it way over there?

She caught herself pulling down her skirt then remembered how bad that looked and let it ride back up. Turning towards the locker room, she considered running out of the place before anyone noticed her.

Meri froze, hearing the deep baritone voice behind her.
Too late.
She squeezed her eyes shut, wishing she could vanish. Meri tried to breathe. Short, shallow breaths were all she could manage. She plastered a smile on her face, opened her eyes, turned around and looked up. Way up.
Holy fucking shit!
What was he, six foot five?
Meri was tall, five foot twelve was how she usually phrased it. What a pleasant change to find a man actually taller than she was.

She extended her hand. “Nice to meet you. I’m Meri.”

She’d never met a more imposing, sexy man in her life. With his jet-black hair and striking blue eyes, he set her heart pounding. Normally, she wasn’t a fan of the goatee look, but on him, it worked. Thank God, she hadn’t run back into the locker room. Just meeting this man was worth the price of membership.

When he took her hand to his mouth and kissed her knuckles, she almost swooned.
Do women still swoon these days? Probably not. Most likely that went out with the vapours. Damn it, Meri, focus.

“If this is your first time here, let me show you around and answer any questions you might have.” He slid her hand around his biceps.

“Have you filled out an interest inventory? If you let me see it, I could introduce you to likeminded people.”

“No.” Should she admit she was overwhelmed by it? She didn’t even know what half the things on there were. “This is my first time venturing into a club or exploring the lifestyle.” She met his gaze and basked in his warm smile. “I was a little confused by it all, actually.”

“I’ll be happy to talk you through it. Would you like to look around first?”

“I’d love to see more of the club.” Maybe she’d learn a bit and be able to speak more intelligently about the inventory.

They continued along the path Meri had been walking. The first piece of equipment they came across was a beautiful, dark wood table. It had a thin layer of padding along the middle with restraints at all four corners. There was a stack of sheets on a shelf underneath.

“Is this for wax play?” Meri whispered. No one was close by, but it seemed too naughty to talk about it out loud.

“Yes. Do you enjoy sensation play?” Ted was gazing down at her like a tiger hungry for a meal.

Meri raised her shoulders the slightest bit. “I have no idea. I’m afraid I haven’t experienced much outside the vanilla realm and probably towards the conservative side of that.” She gave a nervous chuckle.

The smile that slid across Ted’s face sent butterflies through her tummy. “Everyone in the lifestyle was a newbie at one point. How did you get attracted enough to seek out a club?”

“That’s smart. It’s a much safer environment to explore your kink in. Is there anything in particular that you’d like to see? During the week, it’s a bit quieter than on party nights. It’s a good way to get your feet wet without being overwhelmed.”

“Exactly my thoughts. Thank you for giving me a tour. If I ask too many questions, just tell me to shut up.” If he was offering to explain this stuff to her, she was going to take him up on it. Who knew when she’d get the chance again?

“I would never tell you to shut up. I’d be much more inclined to put a ball gag in that sexy mouth of yours than ever speak to you so crassly.”

Oh holy crap, he wasn’t kidding.
“A warning first that I’m exceeding my question quota would be appreciated.”

His deep, rich laughter curled her toes, or maybe it was the ball gag threat. Whatever the cause, sign her up for more please.

“Hmm, I’ll consider it. Hop up on the table. You can get an idea of what goes through a sub’s head before the play begins.”

Why does this feel like a test?
She wasn’t wearing any panties. If anyone walked past the table, they’d be able to see her…everything.
What if Master Ted walks to the end of the table?
The thought alone had wetness pooling where her underwear should have been. What was the point in coming here if she chickened out before trying anything?

“Should we put a sheet down first or is it okay without one?”
Oh hot damn, that’s one sexy smile he’s sporting.
Yes, coming here was a good decision indeed.

“If you want to enjoy wax play—yes, we would need to put a sheet down. You’ll also need to strip. If you want to just put your toes in the water, so to speak, and see what the anticipation feels like—no.”

“I didn’t bring my nose plugs or a towel, so I think I’d better stay out of the deep end tonight and just dip my toes in.”

“Oh, we have plenty of plugs, but they aren’t designed for your nose.”

She was beet red. Her face and the tips of her ears were blazing hot, but she enjoyed bantering with him. He was fun. Not at all like the men she worked with or normally dated. Meri turned around and placed her rear against the table. Before she could use her arms to lift her, Ted—Master Ted—picked her up and placed her in the centre on the padding.

Scary, scary, scary.
She closed her eyes and lay back against the table.
Oh, dear Lord.
Her breasts had always been on the larger side and never had the perky ‘stay where they belonged’ quality she’d wished they’d had. With her lying on her back, they tried to slide over to the side and pop out of a badly placed slash in the material. Meri squeezed her eyes even tighter closed.

Okay, this wasn’t going to work. She couldn’t do this. She felt too vulnerable. Using her arms and tummy muscles, she pushed into a seating position—or tried to. Ted’s hand pressed firmly between her breasts. “I didn’t give you permission to sit up. You were told to lie down flat. Do not disobey me again.”

With one hand on her chest and his other at the back of her neck, she allowed him to guide her back down to the table. “Yes, Sir. Sorry, Sir.” Good thing she’d ditched her panties or they’d have spontaneously combusted about now.

Her heart was hammering, he had to feel it. His hand was burning a hole through her dress.

Pet?
She wasn’t fond of that term, but her body’s reaction to him was intense. “This dress wasn’t a good choice.” For once in her life, she stopped there and didn’t expound on the topic. She crossed her arms under her boobs and brought them back to the front and centre.